Old Delhi's New Gramophone House, a treasure trove of vinyl recordings of all genres, opened in 1947. Bhagwan Dass Rajpal opened the original store in Lahore in 1930 but moved his family and the business to India during Partition. The store can be difficult to find. It is located on the first floor of a building on the main road of the extremely busy Chandni Chowk and there are no obvious signs of its presence from the street. Visitors must pass through a different shop on the ground floor, then scale a steep set of steps that sit below a low ceiling (watch your head) before reaching their destination. But it's worth persevering as once there the vinyl fan enters paradise - a small room packed with thousands of recordings stacked on shelves and in cabinets.

I make a pilgrimage to the shop every time I am in Delhi with the objective of adding to my small but growing collection of vintage Bollywood soundtracks from the 1940's, 50's and 60's. Regular readers will know of my love of jazz but thanks to a former work colleague I have been smitten by classic Hindi film songs. Playing them on youtube is no longer enough - I want to handle the vinyl recordings and have them in my collection.

Of course Bollywood churns out hundreds of contemporary musical productions but I do not enjoy these so much and prefer contemporary Indian dramas. In recent years Indian cinema has dealt with many social issues in films including Dangal, Dhobi Ghat and Aligarh as well as producing delightful romances like Lunch Box and suspense stories such as Aandhanhun. But you really can't beat those vintage movies and I've grown to love the films of Raj Kapoor, Johnny Walker, Madhubala, Nargis, Guru Dutt, Nadira and Bollywood's best dancer, Helen. They tell a story, tackle issues and have memorable songs performed by the classic playback singers - Mohammed Rafi, Manna Dey, Kishore Kumar, Hemant Kumar, Geeta Dutt and of course sisters Asha Bhosle and Lata Mangeshkar. 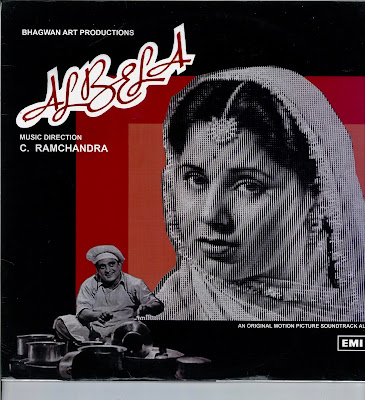 More recently I came across a film called Albela. Released in 1951 it was directed by Bhagwan Dada who also starred in the film together with Geeta Bali. It tells the story of Pyarelal the son of a poor Bombay family who needs to accumulate money to help marry off his sister, Vimla. Not only does he fail to raise the required amount but he also loses his job. The resultant quarrel with his family leads him to leave home vowing not to return until he is rich and famous. He goes on to pursue a successful career in the theatre and eventually decides to return home only to find things are not as he believed them to be. You'll need to watch the film to find out how it ends! Albela was the third highest grossing Indian movie of 1951 and its soundtrack by C. Ramchandra continues to be acclaimed today. Ramchandra performed most of the songs himself (under the name of Chitalkar), dueting with Lata Mangeshkar on several tracks and with the superstar Mohammed Rafi on one song. The film also made use of westernised style cabaret dance and choruses as well as using bongo drums, oboes, clarinets, trumpets and saxophones, little used in Indian film during that period but which still influence cinema today.

Director and leading man, Bhagwan Dada was born in Sindhudhurg, Maharashtra in 1913. The son of a textile worker, he originally worked as a labourer but had a strong ambition to work in cinema. He eventually obtained work in silent films, making his debut in a movie entitled Criminal. He went on to learn film making, co-directing his first film in 1938 and from then until 1949 he made a number of popular low budget movies. As well as producing Hindi movies, he made at least one Tamil film, Vana Mohini, in 1941. This film was significant for including an elephant as one of the leading characters! A year later he worked with prolific film actress Lalita Pawar. There is a story that he was required to slap her in one scene and that hitting her too hard he injured her eye leaving permanent damage.

In 1947 he set up his own Jagriti Studios and four years later produced his all time classic Albela. Shola Jo Badhke, the best known song from the move is still popular today and Albela is often performed by students as a high school musical. He went on to produce a few more hits in the 1950's but then his success dried up and he was forced to sell his home and cars and take on bit parts in other people's films. He was eventually reduced to living in a chawl, a one room home in a tenement block originally built to house textile workers. Bhagwan died of a heart attack in 2002. A biopic of his life, entitled Ekk Albela, was released in 2016. The original vinyl soundtrack of his masterpiece can still be found and I returned from my most recent Delhi trip with a copy - purchased at the New Gramophone House of course!

See pictures from India here.
Posted by Yekkes at 14:38