An Art Deco synagogue, a famous writer and a modernist landmark - Jewish Ahmedabad

Ahmedabad is the largest city in Gujarat. It is home to almost 6 million people, 80% of them Hindus and 13% Muslims. There are also significant numbers of Jains, Sikhs, Christians and Buddhists and almost 150 Bnei Israel Jews. During my recent time in India I was was able to meet some of the community members, to visit their beautiful synagogue during the preparations for Yom Kippur and to eat a delicious lunch in the home of India's most accomplished Jewish writer.

The Bnei Israel Jews arrived in India about two thousand years ago. Fleeing the land of Israel after the fall of the Second Temple, survivors of a shipwreck came ashore at Alibaug in the Konkan region, on India's west coast. They lost their books in the Arabian Sea but maintained the Hebrew prayers and Jewish customs including circumcision and the dietary laws. They established new communities and worked as oil pressers and farmers. Their descendants still live in the dwindling Jewish communities of Mumbai, Ahmedabad, Alibaug, Pune and elsewhere in the states of Gujarat and Maharashtra. The Ahmedabad community reached its peak in the 1960's with about 2,500 members. Since then many have left for Israel where communities can be found in Ashdod and Be'ersheva. Others moved to the USA. 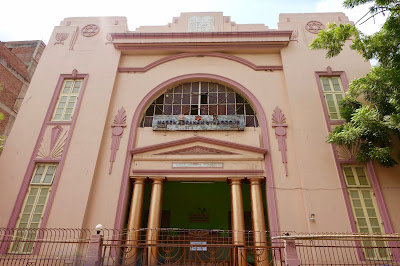 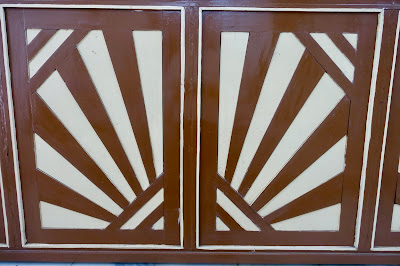 Aviv Divekar is the Secretary of Ahmedabad's Magen Avraham synagogue. We met there whilst members of the community cleaned the building and made preparations for Yom Kippur. He told me that although there are few Jews here now, Jewish life is still possible. There is no rabbi and the last chazan left for Israel in the 1970's but one of the community members has trained in order to be able to lead the prayers and to fulfil the role of shochet. The community is very active, celebrates all of the Jewish holidays and there is a weekly minyan. Interestingly, Aviv also told me that there are several Jewish owned schools in the city but that I would be hard pressed to find Jewish pupils and the school rolls are now made up of Hindu and Muslim students. This is a common story in India. Last year I visited the Jewish Girls School in Kolkata. There are at most 20 Jews remaining in that city and there have been no Jewish students since the 1980's.

The Magen Avraham synagogue was built in 1934 and is a stunning Art Deco structure. It is maintained in good order and many original features remain including ziggurat motifs above the ark, marble chequered floors and decorative grills and bannisters. It is located in the heart of the old city, opposite a Parsi temple, close to a mosque and a Hindu temple and adjacent to a bazaar. As I walked through the streets on the way to the synagogue, people called out to ask where I am from and what is my name. To my surprise one of them asked me if I have ever been to Dewesbury. I haven't, but he had! Aviv told me that there are generally good relations with the different communities and that their representatives are invited to come and celebrate the major festivals. However there has been at least one attempted attack on the synagogue which prompted an increase in security measures including the presence of armed police. 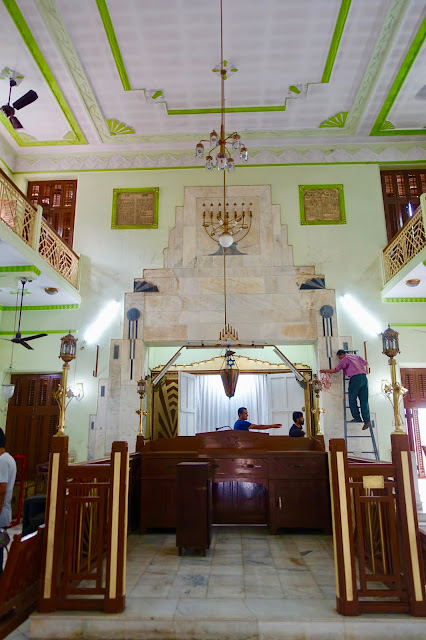 One of the major problems for the Jews of Ahmedabad is finding a marriage partner. Young people generally seek a spouse in Mumbai which is still home to more than 3000 Jews or go overseas, particularly to Israel. Whilst this ensures Jewish continuity it does not always help sustain the local community as it seems that Mumbai brides prefer to remain in their home city and not to move to Gujarat. This issue is also the subject of Bombay Brides the latest novel of award winning author Esther David, a native of Ahmedabad.

It is the latest in a series of books by Ms. David which include both novels and works of non-fiction. She agreed to meet with me during my recent trip, very generously inviting me to lunch at her home where I was treated to a selection of wonderful Indian vegetarian dishes including a very tasty Bnei Israel dish made from potatoes and onions. The food was served on plates that bore the monogram of her father, Reuben David. He was a self taught vet and accomplished animal conservationist who established the city's zoo in the 1950's. An uncle was also a well known figure, knew Gandhi and was involved in the independence movement.

Surrounded by books, photographs and paintings, several of them her own work, she spoke about her career as a writer and her identity as a Jew in India.  After several publisher rejections, her first book The Walled City came out to acclaim in 1997. It was followed by Book Of Esther. Whilst attending a conference in Paris, Penguin offered her a contract to write a 500 page novel about five generations of a Bnei Israel family in India. Her immediate acceptance of their offer took the publishers by surprise. It was suggested she take some time to think but in response she told them "what's to think about, I'll definitely do it". A planning meeting held the next day, originally scheduled for half an hour lasted all morning and ended with a contract being signed the same afternoon. Despite then experiencing doubt on her return to Ahmedabad, she was able to produce the epic Book of Esther based on the story of her family, and inspired in part by what she described as a "huge box" of family photographs. 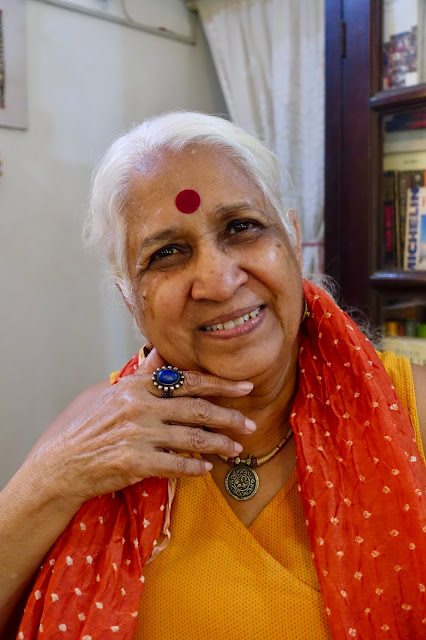 When I recently re-read the book I was struck by the mixture of Jewish and Hindu observance by some of the characters. Some of these practices appear to have been carried out with a degree of secrecy and guilt. I discussed this with a friend who grew up in Mumbai who told me that this mixing of faiths was not unusual and that particular saints and gurus would be revered by devotees of different faiths who would not see this as a challenge to their identity, something the was confirmed by the author.

The David family kept the holidays and traditions but were not particularly religious. The exception to this was her grandmother who Esther remembered "dragging us to the synagogue and organising our festivals at home". Despite being illiterate she was also the keeper of stories, many of which she passed on to her grand daughter and which have influenced her writing. Her parents were less religious and in preparation for writing "Book of Esther" she studied Judaism with Johnny Pingle, one of the community elders. She  developed an interest in the prophet Elijah, an important figure in Bnei Israel tradition which includes the belief that he set foot in India before ascending to heaven, stopping at a village near Alibaug and leaving the imprint of his horse's hoof on a rock. The rock is revered by Bnei Israel Jews who make pilgrimages there, to take vows and to ask for wishes to be granted. It would also come to play an important part in Esther David's life.

She spent many years struggling to find her identity, finally understanding who she was through her writing but more significantly it was a visit to the rock that clarified things for her.  On making that visit she felt "...a sense of homeland, of being a Bnei Israel who had just arrived two thousand years ago".  Esther described herself to me as a secular, Indian Jew who sometimes attends the synagogue but who is also "very desi (Indian) and pukka Ahmedabad". Before achieving acclaim as a writer, some of the community viewed her with a degree of suspicion. Art and literature were not normally things a Bnei Israel woman would be engaged in. They may also have though her a little "too Indian", partly due to her wearing a bindi but she is clearly very comfortable with who she is.

Book of Esther has recently been brought back into print in response to public demand as has Book of Rachel winner of the 2010 Sahitya Academy Award for English literature. The only changes made for the new editions are to the cover, both of which use images of fruit. This seems very appropriate given the importance of food to the culture particularly as Book of Rachel includes a recipe at the beginning of every chapter.

Esther is working on a number of projects designed to record and commemorate the Jews of India. Over a period of four years she attended every community event that she could - weddings, bar-mitzvahs, circumcisions, etc in order to make a photographic record. She is also a collector of Judaica, so much so that families leaving India often donate items to her. She has become an expert in this field and gives advice to museums on their holdings.

After a fascinating three hours spent talking with the only Jewish writer to have written about India's Jews, I left thinking how her work is preserving the history and tradition of a now very small community as well as forward to her new novel...and savouring the taste of her cooking.

Before leaving Ahmedabad I made a visit to another landmark building with Jewish connections. The magnificent modernist Indian Institute of Management designed by Jewish American architect Louis Kahn and built in the 1960's. The highlight is the Louis Kahn Plaza around which the library, classrooms and faculty offices are arranged. This spectacular structure manages to combine modernism with references to the city's past with its arches, columns and approach to providing natural light and shade. Visitors are welcome but must make an appointment in advance. 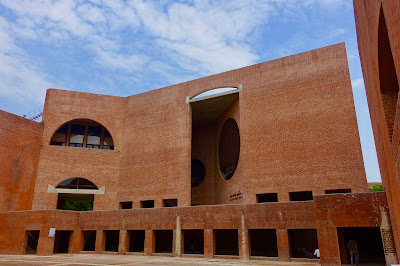 An edited version with additional photographs appears in the January edition of Jewish Renaissance magazine.

You can see more pictures of Ahmedabad here.

You might also like Those Gujaratis Will Steal Your Hearts With Their Food And Their Friendliness
Posted by Yekkes at 10:59