I have recently been spending time in Chinatown, photographing the street life and discovering things  that I'd hadn't noticed in more than 30 years of going there! I have to admit that it is some time since I last went to a restaurant there but I often partake of those long, deep fried "Chinese doughnuts" if I am there at the weekend and occasionally buy little treats including sweets made from various beans, or mangosteens, a small and delicious fruit I developed a liking for when living in Thailand some years ago.

I have many memories of spending time in this part of London, including eating with groups of friends, once or twice attending parties in tiny flats tucked away above restaurants and even going to the Guang Hwa bookshop to purchase of Chinese books for a library service I once worked in and which had several Chinese customers. My recent forays, reading and internet research have made me appreciate Chinatown much more and have also provoked in me discomfort about its future as more businesses are forced out through hikes in rent whilst the number of gambling establishments increases.

For those not familiar with London's Chinatown, it is a collection of about nine streets clustered on the southern side of Shaftesbury Avenue. People know it for its restaurants but bakeries, supermarkets selling Asian food items, hairdressers and community organisations can also be found there. There are also a handful of Japanese and Korean restaurants offering alternatives to Chinese dishes. The main thoroughfare, Gerrard Street is always busy, especially at weekends when Chinese people come from across London and the South-East to shop and to meet friends and family. Many tourists visit and are easily spotted having their photograph taken under one of the ornamental gates before choosing a place to eat. This street is also the main focus of public cultural activity at Chinese New Year and other festival times as well as a place you might see a political demonstration by Falun Gong, Jehovah's Witnesses distributing brochures translated into Chinese or occasional buskers at the junction with Wardour Street.

London's original Chinatown was in Limehouse in the East End where most of the city's Chinese population lived at the beginning of the 20th century, many of them running businesses catering to seamen from the nearby docks. The area was heavily bombed during the Second World War and many Chinese businesses and homes suffered destruction or damage. Post-war demolitions destroyed most of what remained and a new Chinatown was gradually established around Gerrard Street in the late 1960's and early 1970's. However the Chinese presence in this part of the city predates this. In "London Nights Out: Life In Cosmopolitan London" Judith R. Walkowitz refers to Soho restaurants run by Hong Kong Chinese in the 1930's as well as other Chinese businesses bombed out in Limehouse coming here in the 1940's on extremely disadvantageous leases just to stay afloat. 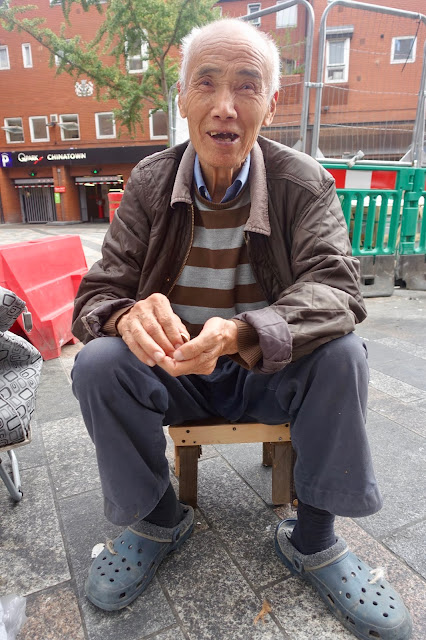 And so to my discoveries. Wong Kei in Wardour Street is one of London's best known Chinese restaurants. For years it was renowned for the rudeness of the staff who who bellow at customers "upstairs upstairs" as they entered or insist you share tables with people already seated when there was space elsewhere. I remember one famous occasion when going there to eat with a group of Chinese friends one was so incensed with the rudeness of our reception that he almost came to blows with one of the waiters. This robust welcome became part of the experience of eating at Wong Kei and people would go there to "enjoy" the experience as well as to sample the food.

The Wong Kei building has quite a history. Built in restrained art nouveau style, the foundation stone was laid in 1904 by none other than actress Sarah Bernhardt whilst the coping stone was laid by Henry Irving. Both were extraordinary people. Bernhardt was the supreme star of the French theatre during the late 19th and early 20th century even after having a leg amputated in 1915. She also inspired several of the wonderful art nouveau posters of Czech artist Alphone Mucha. Irving was born into a working class family in Somerset, rose to become a luminary of the British theatre and the first actor to be granted a knighthood in 1895.  This building is proof that one should always look up when walking in London. I have a passion for art nouveau but entranced by the menu in the window only recently noticed the obvious architectural features and plaques to Bernhardt and Irving. For many years the building was home to William Berry "Willy" Clarkson's Wigs by Clarkson. Clarkson was not only an excellent wig maker and costumier, but also an accomplished blackmailer and fraudster. Perhaps unsurprisingly he died in suspicious circumstances in 1934. 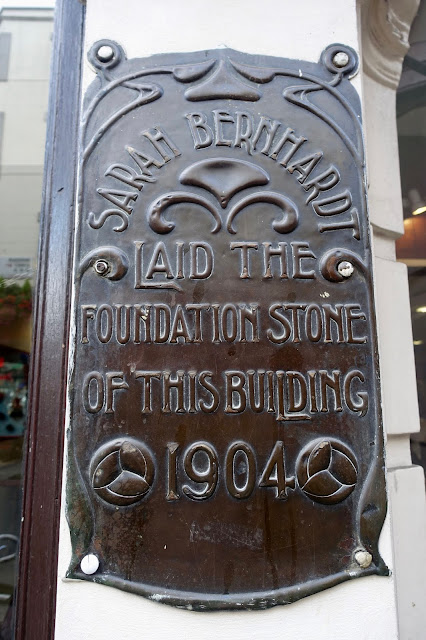 Just across from Wong Kei, there is a narrow alley that runs behind a string of restaurants. This is Dansey Place. At first site (and smell) it is neither welcoming nor attractive. However it is worth venturing in if only to visit Lo's Noodle Factory where delicious fresh noodles are made and sold  very cheaply from this "hole in the wall" operation. Peep over the counter and it is possible to see huge sheets of noodles being stretched out before cut and packed into bags ready for sale. There is also a seafood stall in the street and a small, red and green painted grocery shop.

Our friend Willy Clarkson has a connection with Dansey Place too. Before the Second World War the street was a notorious gay meeting place. Men would congregate in a public lavatory opposite Clarkson's shop and which became known as Clarkson's Cottage. It was also a haunt for blackmailers who would extort money from the men - male homosexuality being completely illegal in the UK until 1967. The facility was so notorious that when it was closed in 1945, a wealthy New Yorker bought it and installed it in his garden.

London's Chinatown is small compared to those of say New York, San Francisco, Manila or Melbourne but it is no less interesting. Whatever time you choose to wander its few streets there will be something to see including early morning deliveries to the shops and the restaurants, waiters and waitresses having quick cigarette breaks before the onslaught of lunchtime customers,  people snacking outside the bakeries and the of course occasional street trader. I recently noticed a couple of older men selling garlic and green vegetables spread out on newspaper. I bought something from each of them and asked if they would let me take their pictures. We do not have a language in common but we somehow understood each other and they agreed for me to take their portraits - both extremely amused that I should want to. I have since returned to give them hard copies of the photographs. Both of them were surprised and after looking at the pictures placed them very carefully in their wallets. One tried to give me free garlic in return! Portraits of the two gentlemen are featured in this post.

It is true that we often don't notice the things we see very day and we don't always realise their value or consider them special until they are lost. This tiny enclave in the centre of London is important not only to the various Chinese communities or as a tourist attraction but because it represents an important part of the city's history. The losses due to high rents and the encroachment of unrelated businesses is worrying. It would be shameful if these few streets lost their unique character in the way that much of the neighbouring Soho has.

Email ThisBlogThis!Share to TwitterShare to FacebookShare to Pinterest
Labels: Chinatown, My London, Soho