Iloilo is a provincial capital on the island of Panay in the Western Visayas. It is known for its colourful Dinagyang festival in January but has so much more to offer. I recently spent two days there, attracted by its collection of art deco buildings. The art deco did not disappoint me but I was charmed by the markets, the streets and most of all the people of a city working hard to improve itself for the benefit of its residents.

After checking in to my hotel I took a taxi to the Public Market in the downtown area with the intention of exploring the neighbourhood. The market building has a an imposing art deco design. The main entrance dominates a busy corner due to its tall yellow tower, decorated with blue fins and deco motifs at the summit. It carries the market's name in stylised lettering and is flanked by simple blue blocks. Built in the 1930's, details of the architect are not known. The colours, smells and sounds of the market quickly diverted me from my architectural focus and I found myself strolling its lanes looking at the produce and enjoying the relaxed atmosphere.

As I expected, the market is filled with stalls selling meat, fish, fruit, vegetables, rice and spices but many of the old traditional businesses can also be seen. In one of the lanes, a family business has been producing sausages for almost thirty years. Within a few metres shoppers can see the whole production process from mixing the meat by hand, to feeding it through a machine into the skins and then cutting the sausages into different lengths using razor sharp thread. There are also a number of traders producing the wraps for the popular lumpia snack, better known in some places as spring rolls. A young man was mixing the batter by hand in a huge vat. His arm entire arm disappeared into the mixture in a back-breaking action designed to ensure the appropriate consistency before it is shaped and rolled by other workers and then laid out to dry and sell.

Stalls also line the exterior of the market. These are populated by brush sellers, jewellery and watch repairers, tailors, seamstresses and several shops selling household goods. It was here that I met a delightful lady called Leonila. In her 70's she has a tiny kiosk selling cigarettes  and other small items. She said that she had worked here for many years, starting before her marriage and continuing until today. I could not resist asking her for a photograph, charmed by her kind face and confident, almost regal way of sitting. Around the corner from Leonila, I noticed a man sitting in a shady alley repairing shoes. Without speaking he indicated that he was happy to be photographed. Unlike Leonila, he seemed subdued but introverted I was still rewarded with a smile when I showed him the picture. The shoe repairer may have been a man of few words but he was not typical of the market people who although sometimes initially shy, were generally friendly, happy to chat about their work, curious about where I was from and why I was in the city. And there is a certain charm about being greeted with "Good afternoon sir" as you wander, remembering to reply with the same "or "good afternoon ma'am" when addressing women.

Still in the market I spotted a barbers' shop, open to the street. I like to have my little bit of hair cut when traveling and I decided to go in. Gerry cut my hair and gave me a head and neck massage to the slight amusement of some of the other customers, surprised to see a foreigner in the shop. Their interest in me quickly waned when an important basketball game came on the wall mounted TV in the corner of the room. Basketball is akin to religion for many Filipinos. Gerry charged me the very reasonable sum of 40 pesos for his service - that's less than 70 pence.

Back to the art deco. The city can boast at least a couple of buildings designed by two of the Philippines' most prestigious architects who deserve to be better known outside the country. Juan Arellano who designed Manila's Metropolitan Theatre was responsible for the Pablo Dulalia building on Calle Iznart. Built in 1932, the bas-reliefs on the facade include geometric shapes, zigzags and floral patterns. As with several buildings in the downtown area it carries the building name and year of construction at the top of the facade. At the time of my visit some of these features were covered with a couple of frankly unattractive advertising hoardings, but these can be removed and the building is now protected by ordinance.

There may be a second Arellano building in Iloilo. There is some support for the idea that he designed the S. Villanueva building on the corner of Calle J.M. Basa and Calle Arenal. Whilst not classically deco it is still striking due to the upper part of the facade being decorated with a lace like filigree. The Villanueva family is one of the city's most successful and prominent dynasties and owns many properties. including the Tiampo building on Calle Aldeguer. Built in 1934 it has been restored in recent years and its white and green facade, central tower and discrete deco motifs make it one of the downtown area's most attractive buildings. The former Cantonese Club is just a few doors away. Built in 1931 it is another example of how grand this neighbourhood must have been before the Second World War.

The other famous architect to have a building here is Fernando Ocampo. Ocampo designed several buildings in Manila's Escolta Street as well as a number of religious, educational and residential properties across the Philippines. The Lopez Boathouse, built for Don Eugene Lopez in the 1930's may well be his masterpiece. A private home maintained in superb condition it is a stunning example of streamline art deco complete with speed lines, a tower and portholes giving it the nautical appearance that led to its name. It has similarities to Bauhaus design and would not look out of place in Tel-Aviv or Miami. I love those orange fins! The house is not open to the public and stands behind a high wall. I had to perch on the step of a minibus and reach up to get the shot below but it gives at least some idea of the building's beauty.

In recent years, the local administration has taken steps to protect the city's built heritage, making use of the slogan "Iloilo, where the past is always present". This attitude is carried over into some amazing work that has been undertaken to transform the city's environment. For many years the Iloilo river was horribly polluted and flanked by hundreds of what are referred to locally as "informal structures" without water, sewage or official power supplies. Having little other option the people living there dumped their rubbish in the river making swimming, fishing and other uses impossible. Today the squatted structures are gone, their former inhabitants housed in better conditions, the river cleaned of pollutants and an esplanade established on its banks. Early in the morning and in the evening towards sunset, people gather there to jog, stroll, fish and meet their friends. Now that the fish are back there is an ambition for its residents to be able to swim in the river again. The environmental improvements here are a real success story, something to be proud of and could act as a model for other cities around the world.

Regular readers will know of my passion (weakness?) for art deco, jazz, coffee and cake. I didn't find any jazz this time (although I did see some salsa!) but I found some great coffee and delicious desserts. The Lapaz market is home to the original branch of the Madge Cafe where they have been serving coffee and snacks since 1938. Madge passed away some time ago but the third generation of the family maintain her traditions and high standards and like to say they were here long before Starbucks. Indeed they were and their coffee is better too. Cafes are great social venues, designed for people to spend time with friends, debating, discussing and gossiping. They are also great places for chance encounters. I happened to be enjoying Madge's coffee at the same time as Ilonggo reggae star Raffy Buenavides. I was introduced to him and we chatted briefly about the Beatles (he is a fan) and about Raffy's own projects.

There are also some very good modern cafes in the new part of the city. Cafe Panay at Festive Walk in the Business Park serves a great selection of local desserts including Halo Halo made from shaved ice, jellied fruits and ice cream which you mix together before eating (Halo means mix); Suman, glutinous rice cooked in coconut milk and served with fresh mango on a banana leaf and Turon which consists of plantain and sometimes other fruits dipped in sugar and wrapped in a lumpia (spring roll). All of them delicious.

Being a vegetarian can be a bit of a challenge on the Philippines but Farm to Table also at the Business Park offers a selection of vegetarian dishes made from super fresh ingredients and served in modern, very comfortable surroundings. They were also happy to amend items from the menu in order to make them suitable for vegetarians whilst craft beers are available for those who like something a bit stronger than coffee or juice. The service here was especially good. I stayed in the Seda Atria Hotel which also has a good restaurant, Misto,  which offers a selection of vegetarian dishes and some good desserts. There is also a second branch of Madge behind the hotel.

I came to Iloilo because of its art deco architecture but found a lot more to admire and enjoy. It is a city of friendly, welcoming people working hard to improve the environment, to protect its heritage and at the same time to modernise and develop. It is a city to which I would like to return.

Look out for another post on Iloilo, coming soon. 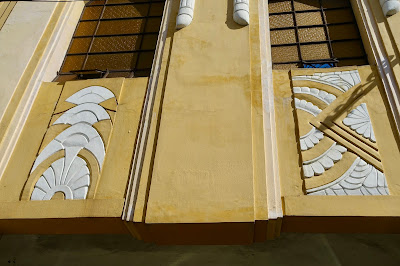 Thanks are due to Araceli Longno Naces for helping me discover the city and for making sure I got to see some great architecture and meet some good hearted people.

You can see more pictures from the Philippines here and here
Posted by Yekkes at 07:13