Today's Expos are the successors to a series of World Fairs staged in the first half of the 20th century. The Paris Exposition of 1925 and New York's 1939 World's Fair are remembered as landmarks in the development of technology, design and commerce. A series of Fairs held in Tel-Aviv during the 1930's is less well known. Intended to showcase the achievement of the emerging state, the Fairs of 1934 and 1936 were held at a specially constructed site adjacent to the Port of Tel-Aviv. A number of leading architects were engaged to design the site which included several pavilions used to house the exhibits of more than 30 countries as well as goods produced by the "Hebrew worker" and a special Women's Pavilion. The Belgian pavilion was to prove the most popular, not for the architecture, but because visitors were given free chocolate. 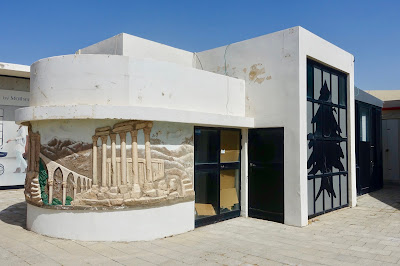 The architects involved in the project included such luminaries as Aryeh Elhanani, Richard Kaufmann and Aryeh Sharon. Elhanani was also responsible for the logo of the Fairs, a Winged Camel. Explanations for the choice of such an unusual symbol include disbelief that Mandatory Palestine would be able to deliver a Fair of this scale. A sculpture was made of the camel but it has long since disappeared, probably destroyed although perhaps it sits quietly in someone's attic or warehouse. He also designed the constructivist style monument to the Hebrew Worker which was demolished at some point but rebuilt in 1989. Several of the pavilions remain today and are being used to house various businesses. Some have been lovingly cared for but sadly others have been lost or changed beyond recognition. Unbelievably the site of the Fairs was not originally included in the city's programs of protected locations but a number of architects, conservationists and historians have done excellent work in challenging this and making the site's importance more widely known.

One of the pavilions that has survived more or less intact is that of the Lebanon. It may come as a surprise to some people that there was a Lebanese presence, but it shouldn't. During the 1930's there was significant movement between cities such as Tel-Aviv, Jerusalem, Beirut, Cairo and even the Arabian peninsula. 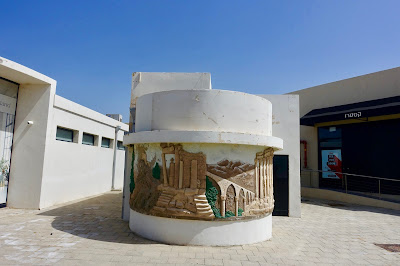 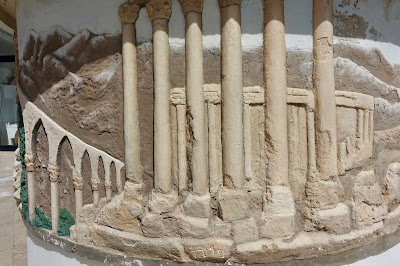 The building is extremely striking due to its gorgeous streamline design and fabulous curved protruding facade which bears a relief depicting the ancient Roman city of Baalbek. The facade also included this quote from the then Lebanese president, Emil Edde "From times long past Israel and Lebanon looked kindly on each other. Lebanon will not miss an opportunity and will make every effort to foster our traditional friendship and to embrace productive reciprocal relations between the two neighbours".  Evidence of this intention included a report in the Beirut An-Nahar newspaper that a Jewish woman had been appointed to manage the pavilion and that she was advertising summer resorts in Lebanon as part of her duties. So important was this part of her work that several Lebanese resorts petitioned Edde to add a second worker in order to expand the advertising campaign.
.
The identity of the artist responsible for the relief was rediscovered when conservation work revealed the signature of Aharon Priver. Priver came to Eretz Israel from Poland in 1922 and went on to design the bronze memorial to the founders of Tel-Aviv on Rothschild Boulevard as well as the 1948 War Memorial at Tel Yosef. From the 1960's the pavilion was used as the reception area of a repair garage, the owner of which was both aware of and interested in the building's history. Despite his taking good care of it the humidity and salty environment took its toll over the years. Today the building stands empty awaiting a new use. I think tt looks like a good place to drink coffee and eat cake. 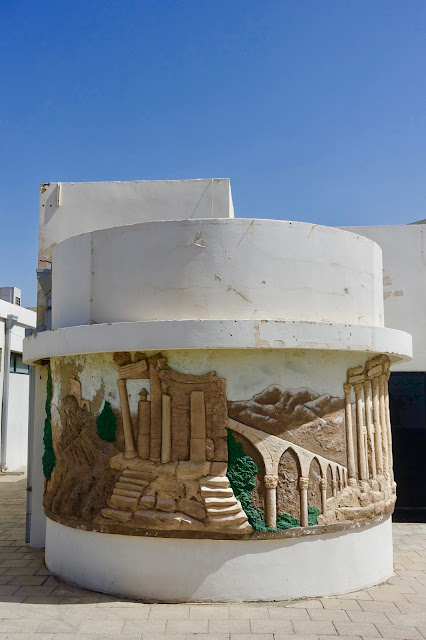 You might also like - A Modernist House with a story - The French Ambassador's House in Jaffa
Posted by Yekkes at 17:43