The former Balham Odeon cinema is a two minutes walk from Clapham South Underground Station. For many people the cinema was misnamed as it is closer to Clapham than to the centre of Balham. Designed by George Coles, it opened in April 1938 as part of Oscar Deutsch's Odeon chain. The height of modernity, the cinema boasted the latest developments in projection, sound  and air conditioning. Visitors were able to meet their friends in a large foyer before ascending the central staircase leading to a first floor cafe flooded with natural light. On their way up patrons would pass pink mirrors designed to soften and flatter their features! The first screening was Blondes For Danger, a thriller starring Gordon Harker as Alf Huggins, a London taxi driver caught up in a political assassination. 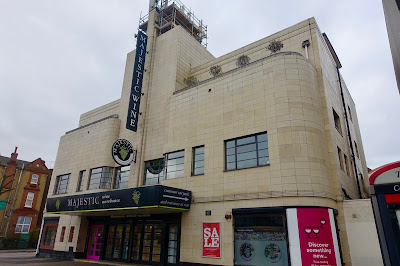 The Odeon was the largest cinema in this part of London and could seat 1,822 patrons, 1,216 in the stalls and 606 on the balcony. Its location on Balham Hill meant that the illuminated sign was visible from some distance and no doubt helped attract visitors from a wide area. Its popularity would have been aided by it's being the main cinema for some distance, the nearest large competitor being Tooting's Granada. The Odeon survived damage from a German bomb in 1941 and reopened after a few weeks following completion of temporary repairs. However it was not able to survive a downturn in attendances during the 1970's and closed on 9th September 1972 when Shaft's Big Score and No Blade of Grass were the final screenings.

Renamed the Liberty Cinema, the doors reopened at the end of 1974, to show Asian films. However, this also was not to last and  the second and final closure came in 1980. The building then stood empty and vandalised before the auditorium was demolished in 1985 and the Majestic Wine Warehouse took over the foyer with flats added at a later date.  Today only the original facade remains and still has an imposing presence. Symmetrical and curved at the front corners, the two halves are joined by a central tower which once bore the illuminated sign carrying the Odeon name. The whole facade is clad in beige faience which to me at least always adds an air of modernity. Whilst it is good that at least the facade remains, it is sad that the former Balham Odeon is one of many art deco cinemas lost to London. 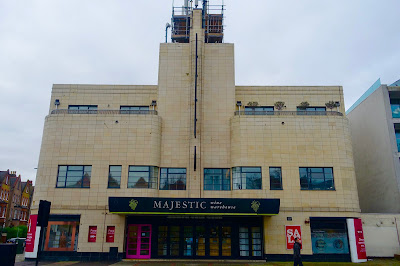 You might also like Woolwich Odeon art deco survivor in south-east London and A Postcard from India 4 - Calcutta's Art Deco Metro Cinema
Posted by Yekkes at 23:06