A Postcard From India - 7, Churu, a Rajasthani secret

Three years ago whilst visiting family in Australia I came across an exquisite coffee table book - "Abandoned India The Mansions of Shekhawati". Beautifully illustrated, it told the story of the havelis (mansions) of the Shekhawati region in Rajasthan. The word haveli is thought to come from the Arabic hawali, meaning partition or private space. Their traditional layout includes specific and separate living areas for the family, their retainers and visitors as well as provision for the keeping of animals all arranged a large central courtyard. The courtyard would be used for ceremonies and rituals as well as being a place of work, particularly for women for whom its high walls provided privacy from the street. 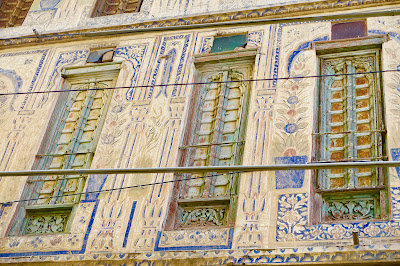 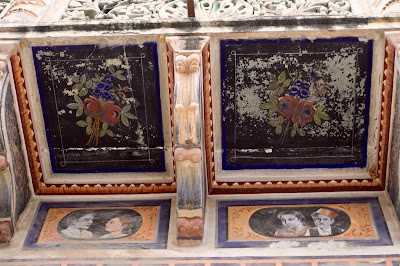 Shekhawati was once an important stop on the trading routes between China and Western Asia. Caravans passed through carrying saffron, spices, silk, tea, tobacco, gold, opium and other valuable goods. Much of this trade was driven by the Marwaris who originated from the former princely state of Marwar also known as the Jodhpur region of Rajasthan. Marwari merchants achieved control over much of the region's trade during the 18th century, a position that was enhanced under the British who saw them as effective partners in developing commerce in India.

Many successful Marwari merchants used their wealth to built spectacular homes, ostentatiously displaying their success through their design and decoration. But this was no  vulgar display of nouveau riche wealth, rather one which employed the region's best artists and artisans to exemplify the best traditions of Indian mural painting and decorative art. These influences included Mughal style painting, but depicting scenes from contemporary life with images of industrial and household objects, cars and trains, Rajasthani royalty, Bollywood stars and even poking the odd bit of fun at the expense of the British. There are also depictions of scenes and figures from Hindu scripture and tradition.

It is estimated that there are several thousand havelis in the Shekhawati region, most of them  now uninhabited and many deserted and in a state of serious disrepair. This is due to the families having moved to Mumbai, Kolkata or other major cities several years ago and the younger generations not feeling a connection to the old home. In some cases there are also legal difficulties relating to multiple ownership of properties and responsibility for maintenance. Whilst some of the buildings are lovingly cared for and others are being carefully restored, many are beginning to crumble and there is a danger that this unique heritage could be lost in the future.

Back to that book. My daughter kindly bought it for me as a surprise, and delighted, I spent hours poring over it, desperate to see the buildings for myself. Several of the photographs were of buildings in Churu, a town in Rajasthan. I was to be surprised again when I arrived there and checked in at my hotel, the Malji Ka Kamra  and was introduced to my guide who turned out to be none other than Lal Singh Shekhawati who had written the introduction to the book! Amazing India indeed. Combining Italian style with local artistic tradition, the hotel was built in 1920 by one Malji Kothari as a guesthouse for Maharaja Ganga Singh. It was the setting for many glittering gatherings with a stellar guest list that included royalty, important merchants and British officers. The Maharaja often stayed there and one of the rooms still bears paintings of him. Much of the building has been faithfully restored in recent years following a partial collapse. I stayed there for two nights - sleeping in the Maharaja's former room and admiring the stunning murals.

Lal Singh led me on a walking tour of several of the town's havelis. One of my favourites was the Tolaram Kothari Haveli. Built in 1870, this it is still inhabited and better still, the owners have cared for it and are undertaking restoration work. Entering from the street through a narrow doorway I saw some of the family and their helpers using the courtyard space. Some of the older relatives were relaxing and reading the newspaper whilst others were working on the production of small craft items for sale. They generously allowed me to walk around the external areas of their home and I was able to admire the stunning murals painted on to a special plaster that includes crushed sea shells. I also witnessed daily life within the haveli with mundane tasks such as sweeping, laundry and cooking being carried out in different areas. The restoration works have uncovered many little treasures with collections of biscuit tins, soap boxes, magazines, books, paintings and other ephemera from the first half of the 20th century having been found. These items also tell the story of daily life in this region during those years and are precious items of social and design history.

The Manna  Lal Hanutmal Surana Haveli built in 1890 has also benefited from recent restoration.   It boasts a stunning doorway with an image of the Hindu deity Ganesha flanked by Mughal type scenes and fabulous art deco motifs in different shades of purple, contrasting with the surrounding greens and yellows. There are also images of important looking men - possibly family members - under the arch above the door which in turn is topped by Italianate angels straight out of a Florentine Palazzo! And then there is the door itself, studded with gold and silver coloured metals in geometric patterns. This collection of styles epitomises the beauty of haveli design with its diverse influences coming together to create a beautiful work of art. Magnificent.

We have already come across Maharaja Ganga Singh. Born in nearby Bikaner in 1880, he ruled the former princely state of Bikaner from 1888 until 1943. He achieved much during his lifetime and is remembered as a great reformer who in 1913 established a representative assembly, a High Court system in 1922 and a series of financial benefits for employees including life insurance. He also set up a savings bank for ordinary citizens, outlawed child marriages, introduced prison reforms and established several educational institutions including educational facilities for women.

The Maharaja also served in the military and saw action in the First World War when he was a member of the British Imperial War Cabinet before going on to represent India at the League of Nations in 1924. The owners of Churu's Parakh Haveli, built in 1925 had the exterior of their home decorated with images of the Maharaja using various forms of transport ranging from a Rolls Royce to a horse drawn carriage.


I was also able to visit the Sushil Kothari Haveli, just a short step from Malji Ka Kamra. The main courtyard is surrounded by a series of walkways and arcades all of them decorated with images of elephants, birds, floral motifs and miniature representations of important people.

The havelis are Churu's main attraction but the town has other architectural treasures too. Much to my surprise, Lal Singh was able to show me two fabulous 1930's buildings in the Art Deco/ modernist style. One displays style moderne features with smooth lines and limited external decoration. The other is a glorious example of art deco architecture sporting pink and blue motifs on the cream facade and delightful plaster elephant heads keeping guard on the external walls. Details of the architects and firm dates of construction of each are not known. There is also a Jain Temple in the centre of Churu. Few Jains live here now but the temple is beautifully maintained, its walls covered in scenes from Jain and Hindu scripture, gold leaf and exquisite ceramic tiles.

I also spent some time walking in the bazaar area. Like most Indian towns, Churu has many small shops including jewellers, tailors, paan sellers, sweet sellers and chaiwallahs as well as countless stalls selling fresh fruit and vegetables. Cows wander the streets and one sometimes has to navigate a way through them as they gather near the food stalls or park themselves at the side of the road. They are not the only animals in the street as camels and donkeys are used for transporting goods and sometimes people from one place to another. 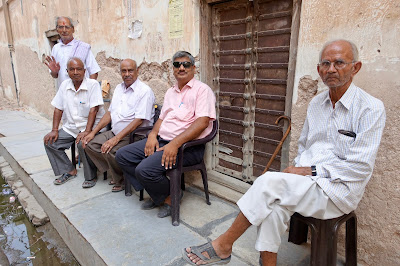 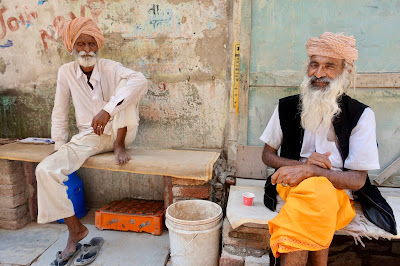 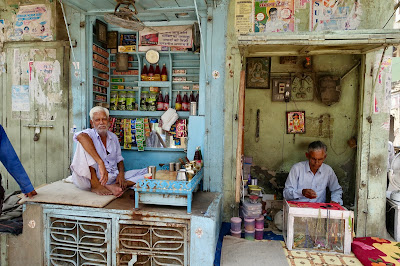 One of the most memorable things about my recent time in India has been the friendliness of the people. I was possibly the only foreigner in Churu at the time of my visit and was the object of some interest as I passed through the street. People called hello and were very happy to be photographed, several requesting me to take their picture or to have a picture taken with me. There was also much consuming of chai and lots of people were happy to sit and chat for a while. These included groups of older men sitting in the shade and chatting with their friends and a group of younger men with donkey drawn carts transporting enormous loads of goods around the town. I photographed one of these young men with his donkey and cart carrying a huge pile of goods. He saw me later the same day and asked me to take a nice picture of him with his hair combed and standing beside his donkey. You can see the nice picture below. 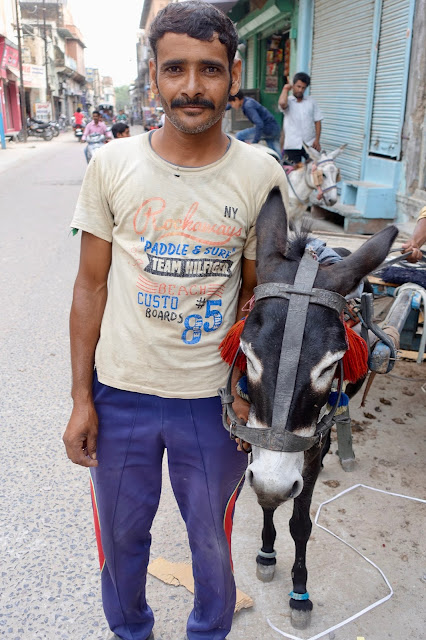 Regular readers will know of my fondness for coffee and cake. I did not find a coffee shop in Churu but I did visit have the wonderful Prajapat sweet shop that makes and sells pedi, a delicious semi-soft sweet made from khoa, sugar and a range of traditional flavourings. Lal Singh introduced me  to   the   shop and the pedi sweets. I enjoyed them so much I made a return journey to Prajapat in the evening to buy more! The shop can be found in the Bhai Ji Chow area of the town.


There is a train service between Delhi and Churu which takes about four hours, whilst it took six hours to do the same journey by car. Churu's treasures, the havelis are not yet widely known and the town currently receives relatively few overseas visitors compared to other parts of Rajasthan. It is a good idea to visit now before its secret is out. My stay here was one of the highlights of my time in India. I can't wait to return to see more.

And a few more pictures from Churu... 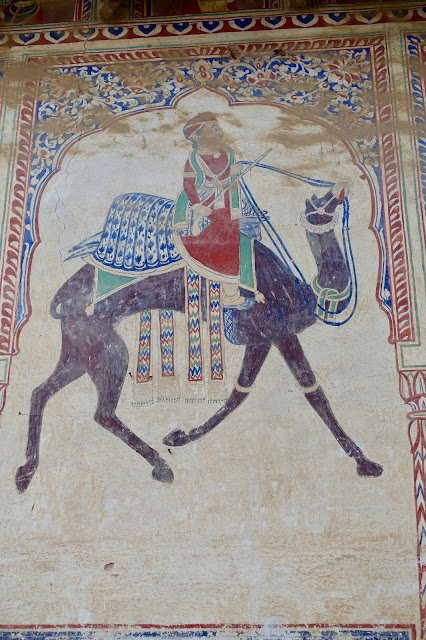 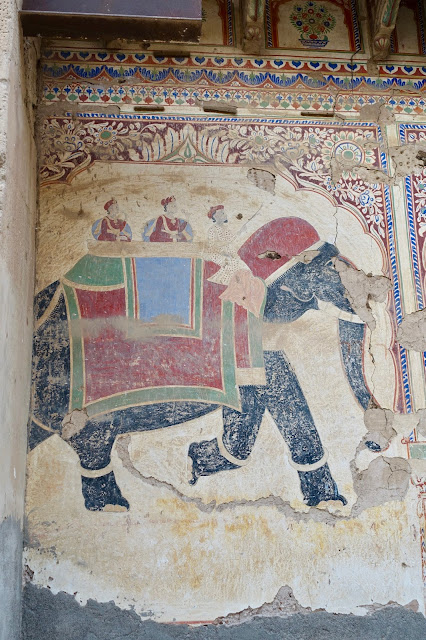 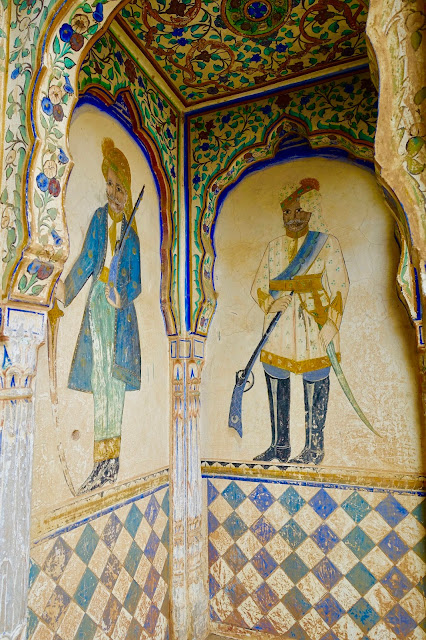 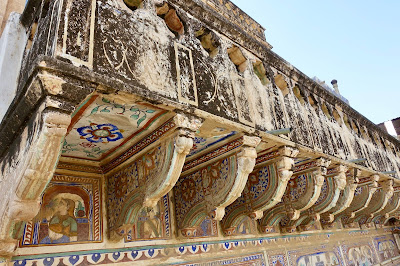 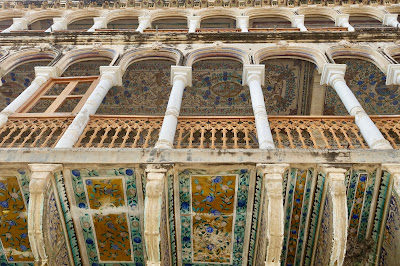 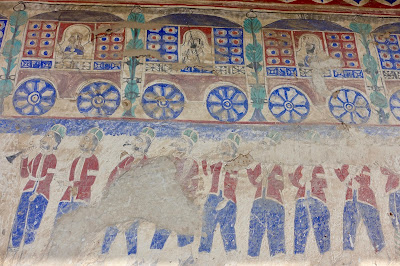 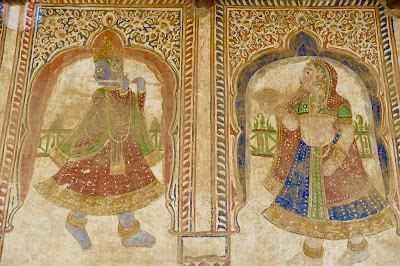