A Postcard from India - 6, Calcutta - the people in the street

Much of my recent time in India was inspired by books. Nowhere more so than Calcutta, or Kolkata as it is now known. Amit Chaudhuri's "Calcutta - Two Years in the City" and a photographic book - "Calcutta - Chitpur Road Neighbourhoods" both of which focus on North Kolkata excited my interest in this city of almost 15 million people and made me long to walk its streets. 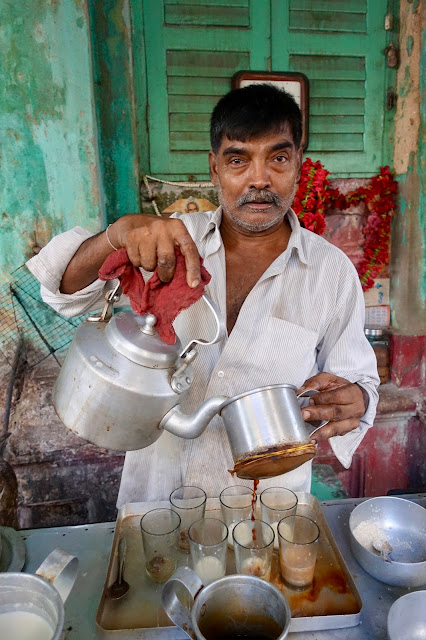 Once home to wealthy merchants and the focus of the Bengali cultural renaissance of the 19th and 20th centuries, North Kolkata is now the site of crumbling mansions and forgotten palaces, its former glory fading rapidly. Despite this, I quickly grew to love this part of the city, initially because of the architecture. Decaying buildings can be photogenic, but interesting as the old palaces, mansions and colonial era buildings are, I soon realised that the most interesting thing about this neighbourhood and the  city is its people.

On the day of my arrival, I hired a driver to take me to some of the streets photographed in the Chitpur Road book. I began in Zakaria Street, a predominantly Muslim enclave whose landscape is dominated by the Nakhoda mosque. I was immediately struck by the number of people in the streets, the chaotic activity as hand pulled rickshaws, delivery vehicles, tuk-tuks, street stalls, pedestrians and the occasional animal powered vehicle competed for space. It was difficult to know where to point the camera first and I was unsure how people would react to being photographed. I had no need to worry as not one person refused a request for a picture and indeed, some came forward to ask that I photograph them too once they saw the camera. 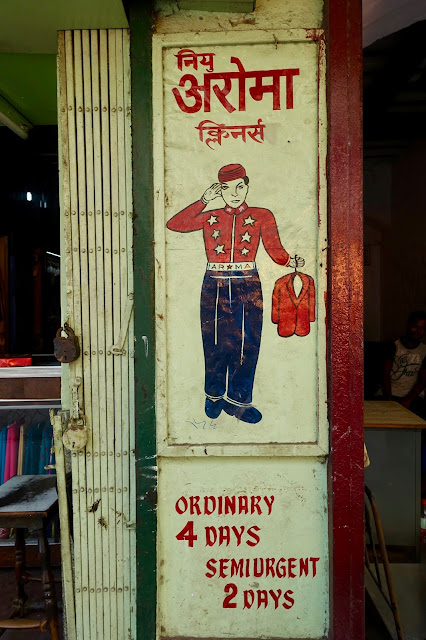 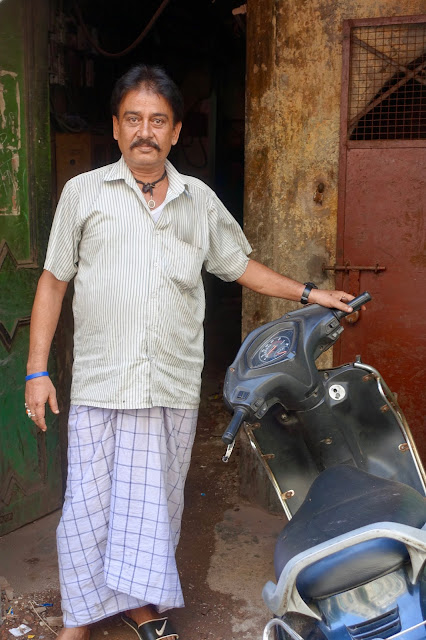 The "price" of a photograph was often a short chat with people interested to know where I was from, what I was doing, how long I would be in the city and where else I would see in India. This was almost always accompanied by invitations to drink masala chai purchased from a chaiwallah, one of hundreds, possibly thousands of street tea sellers in the city.

One such invitation came in a lane leading from Zakaria Street to neighbouring Tarachand Dutta Street. I noticed a sign for a dry-cleaners bearing the service legend "Ordinary 4 days, semi-urgent 2 days". No urgent service then. A group of men were sitting in front of the sign and I asked if they wouldn't mind allowing me to photograph it. "No problem" came the reply before one Javed Uddin stepped forward, introduced himself as the owner of a delivery business and offered me the obligatory chai. His friend's daughter had been married the day before and I was also given sweets from the wedding. Before we parted he told me to visit the city again and that if I had any problems in Kolkata I should come and see him. He could help. People knew him. I photographed him standing beside a motorbike in the doorway to his home. He liked the picture.

In the same side street a young moustachioed man wearing a blue shirt and checked lungi asked me if I wanted to take his picture. His work mates came out to see what was happening which resulted in the picture below. I also photographed blue shirt separately. He asked "am I handsome?". Who could say no? 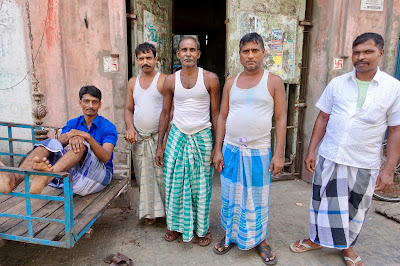 Still in North Kolkata, I met Mohan Lal a chaiwallah operating a stall on Beadon Street. It is Mohan's portrait at the top of this post. I was struck by the bright green of the wall behind him, the red of the garland and cloth and the crisp white of his overall. He had a long queue of people waiting to buy chai as well as several customers sitting on a long bench already enjoying their drinks. One of his customers, a Mister Singh, originally from Bihar invited me to drink tea and told me that Mohan had been selling chai here for many years.

Not far from Mohan's stall I was again struck by bright colours. A family were selling wada - a deep fried savoury snack. The smell was enticing but the deep red backdrop was the thing that I first noticed. As I got closer the father offered me a wada and said "please sir, take one picture of my son". I suggested I photograph them together and that mum join the picture too. Mum could not be persuaded so it was just dad and son. The picture below tells their story. 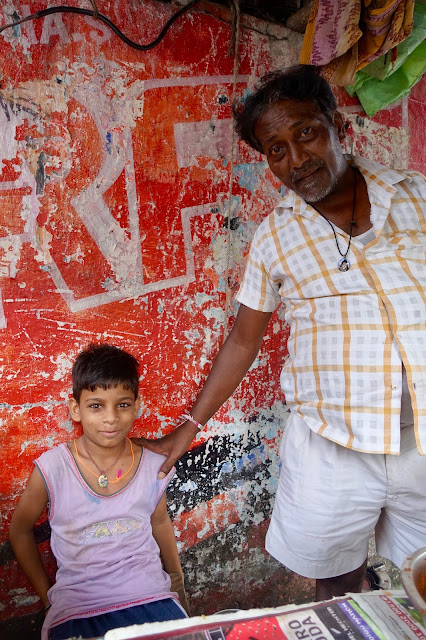 People in this city work hard. Market porters carry enormous amounts of fruit, vegetables, fish and other items to be sold at the wholesale markets without the use of machinery taken for granted in the western world. I witnessed amazing sites at one of the bazaars as eight men unloaded a massive consignment of vegetables which could have weighed anything up to 400 kilos, perhaps more. The goods were taken from a delivery truck and loaded onto the heads of four porters who moving in absolute unison carried them into the market, walking over wet, muddy ground. No machinery involved, just strength and co-ordination. Breathtaking.

Kolkata is the only city in India that still has hand pulled rickshaws. Many of the men involved in this work come from Bihar, one of the poorer states. Generally the rickshaw pullers are physically small and lean yet manage to pull not only passengers of all shapes and sizes but also enormous piles of shopping purchased in the various bazaars.  I was told the work is all about balance rather than strength but it still looks like a severe test of strength to me. A few years ago the city authorities moved to outlaw hand pulled rickshaws but the drivers protested saying that lacking qualifications or training they had no other work and the ban was not enacted. I understand that there are now proposals to introduce battery powered rickshaws. 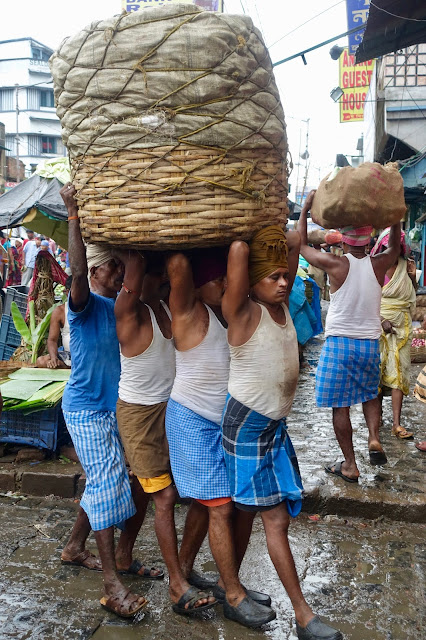 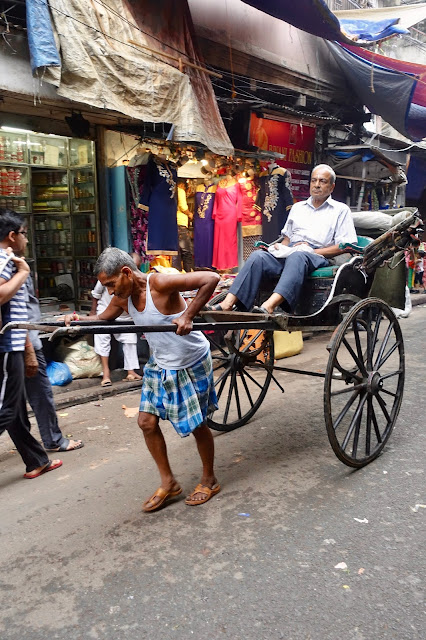 It was touching to watch these men enjoying brief rest in the afternoon, reclining on the rested rickshaws, chatting to each other or in some cases talking on mobile phones, enjoying brief contact with relatives in their home town or looking at family photographs. I photographed several groups of rickshaw pullers and porters at rest and was struck by the obvious bonds of friendship and the expressions of deep thought, perhaps wondering about life back in Bihar or another home state. 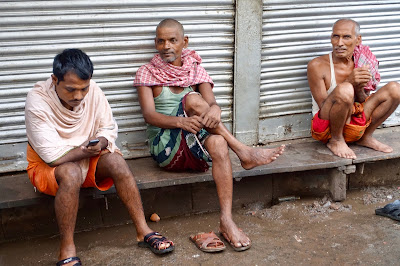 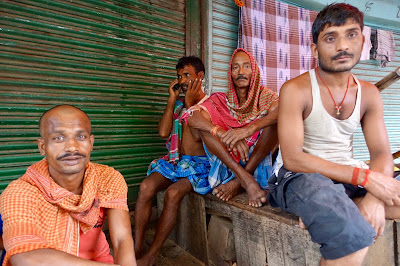 Still with the bazaars, I got up very early one day during my time in Kolkata so that I could see the early morning activity at the wholesale markets. In addition to the early hour, heavy rain commenced just before I left my hotel and continued throughout the three hours I spent in the markets photographing the traders, porters and customers.

Even in the poor light, I was struck by the brilliant colours of the produce, the backdrops and the clothes of the people. Few tourists come here and I was free to wander, watch, chat and take pictures, both candid and more formal. At one point I heard raucous laughter coming from one side of the fish market. A woman had placed a plastic bag on her head as protection from the rain, provoking much amusement amongst the neighbouring merchants and their customers. I looked across the market, saw her and began to snap. Once she noticed the camera she began to play up, wave and laugh before assuming a more serious pose, resulting in a great set of pictures. 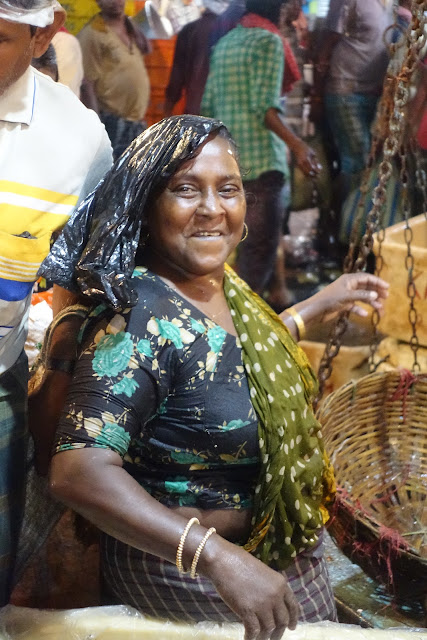 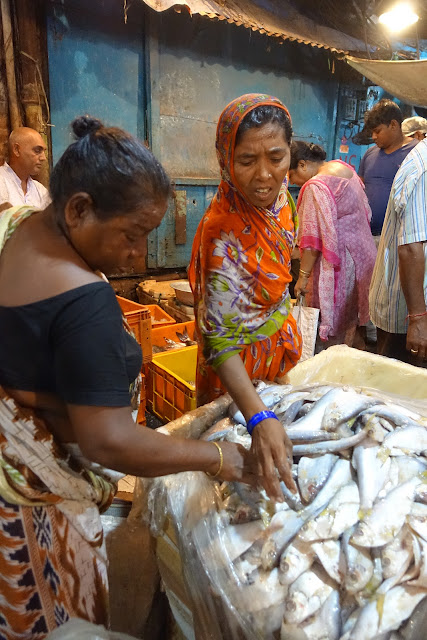 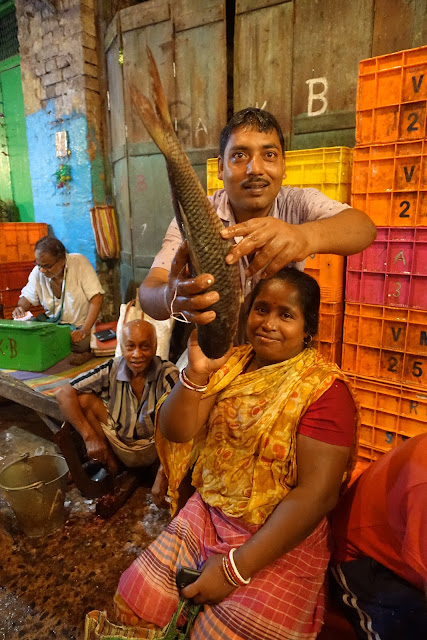 The market is alive with the constant activity of deliveries, porters rushing about with piles of produce and the banter of negotiation between sellers and buyers. The bargaining activity is fascinating to watch as both parties assume a role, employing comments and facial expressions to either preserve their original price or to secure something cheaper. I watched one woman turning over several fish, turning her face up at them and implying that the quality was not good as a way of influencing the price before making her purchases. Her performance must have been convincing as she left looking happy.

The same woman also bought fish from a delightful married couple who asked me to take their picture together. The husband held up a large fish and invited me to photograph it. Clearly proud of the produce, the couple smiled and I clicked, just before water began to pour through the ceiling and on to the head of his wife. She jumped up and fled whilst he continued to hold up the fish and extoll its many virtues.


The market is home to many characters including the porters pictured below, the first of whom winked at me after being photographed and the second who clad in a fabulous polka dot vest, drew himself up, dragged on his cigarette and posed defiantly. 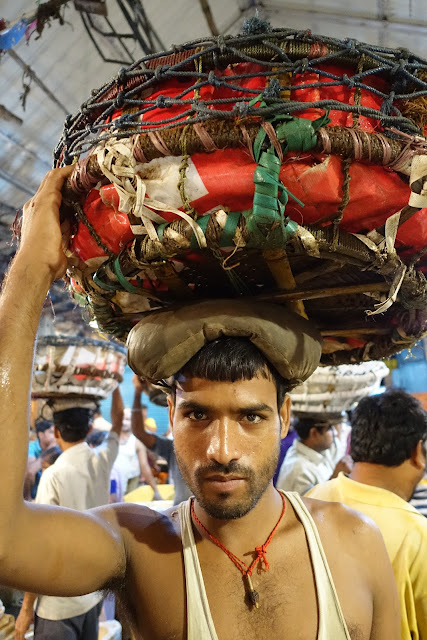 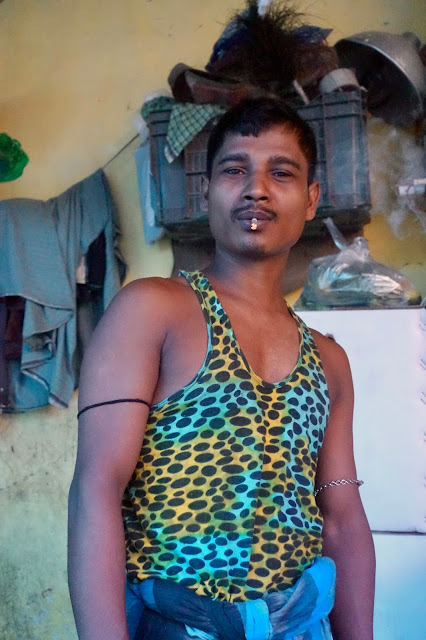 I loved Kolkata's bazaars and was fascinated by the people, the produce and the constant activity and interaction. But ordinary life elsewhere in the city is just as interesting. An early morning walk down to the river - the Hooghly - gave me the opportunity to see hundreds of devout Hindus stepping into the water, engaging priests for guidance on carrying out rituals and offering prayers for family members that had already passed away. The day before I had been to a barber's shop and cut off my little bit of hair. I was wearing a long, white, collarless shirt which could easily be taken for a panjabi, and in fact was as one of the priests asked me if I had come to enter the water - mistaking me for one of the devotees because of my appearance. 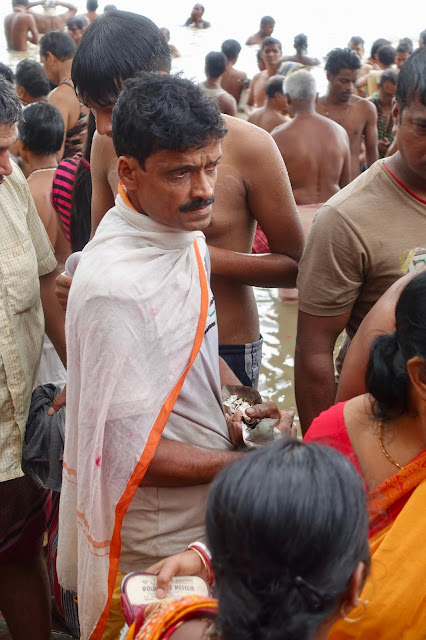 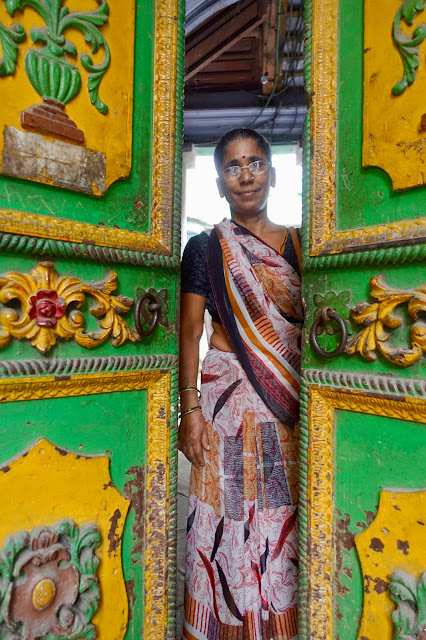 Back on the streets of North Kolkata, a set of beautifully carved wooden doors leading to the courtyard of an old residential building proved to be a wonderful setting for a photograph of a Hindu woman in a brightly coloured sari, whilst taking shelter from the rain under an awing in College Street provided me with a photograph of four elegant women leaving the famed Indian Coffee House and sheltering under their umbrellas. 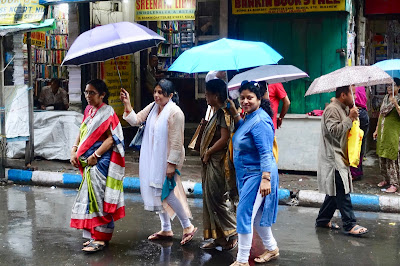 Kolkata does not attract the numbers of foreign visitors received by Mumbai, Rajasthan or Kerala. it should. It is home to many buildings and institutions important to the history of the country including the Indian Museum with its major ethnographical, archaeological and art collections, the Victoria Memorial and many, many temples, mosques and gurdwaras. It is also home to almost 15 million people who make the city the astonishing place that it is.

Note - the city is now formally known as Kolkata although many people still use the old name too. I have used "Kolkata" in this post except when referring to two books that have used the old name in their titles.

Several of the pictures in this post were taken during an early morning tour of the wholesale markets with Calcutta Photo Tours. Private and group tours can be arranged to a variety of locations.