The modernist architecture of Paris, Prague, Vienna and Rotterdam  is well known whilst more recently, cities in Eastern Europe have begun to be recognised for their contribution to the genre. Bucharest and Kaunas are good examples of this but perhaps it is Bulgarian modernism that has been the continent's best kept secret and which is only now beginning to receive attention. This is largely due to the superb Facebook Group - Bulgarian Modernist Architecture - which carries many examples of the style together with, where known, details of the dates of construction and architects responsible.  It is no exaggeration to say that this Facebook page was responsible for my re-visiting Bulgaria after a gap of 31 years. The page is the work of Vasil Makarinov and Theodor Karakolev. On my recent visit Vasil was kind enough to give me a tour of some of Sofia's best examples of the style.

It is important to note that Bulgaria's modernist buildings are not limited to Sofia. Examples can be found in many towns and cities including Plovdiv and Varna which I was also able to visit. As elsewhere, the architecture from this period has not always been recognised for its importance and a number of buildings have already been lost. But, as Vasil explained, the greatest threat to preservation comes from "renovation" which in many cases really means removal of important original features and making unsympathetic additions to the extent that the building loses its original character and becomes unrecognisable. Unfortunately this is a global problem and the examples of near vandalism in Bulgaria are replicated in many cities and countries.

Many of the buildings also suffered significantly during the Communist period. Property was removed from private ownership, the owners ejected or forced into a small part of their former homes and proper care of the buildings became extremely difficult if not impossible. Since the fall of the former regime some properties have been restored to the original owners but this is a complex and lengthy process and whilst it is played out there is further deterioration

Bulgaria's route to modernism was a little different to that of other countries. Independence from Turkish rule was not achieved until 1878 following 500 years of Ottoman rule during which Bulgarian culture was largely suppressed. Soon after came the the Balkan Wars of 1912-13 and the First World War 1914-18 neither of which went well for Bulgaria and perhaps because of this, the period between the 1920's and 1940's was one of great change economically, socially and culturally.

With the onset of industrialisation many people moved to the cities, specially Sofia, Plovdiv, Varna and Burgas, creating an urgent need for additional housing as well as public buildings. This brought good opportunities for architects but Bulgaria's first university architectural and engineering course was not established until 1942. Until then, architects working in the country were either foreign or had been educated in Paris, Vienna, Berlin or Prague. This resulted in modernist influences from other parts of Europe impacting on Bulgaria, including the use of concrete, steel and glass whilst the ideas of the Bauhaus School, Le Corbusier and others about hygiene, separation of living and sleeping spaces and access to fresh air gained ground here too. Little has been published in English about the architects responsible for these buildings but Vasil was able to provide some details for me to supplement my own findings.

Viktoria Angelova-Vinarova was born in Veliko-Tarnovo in 1902. Her father was a British educated merchant who apparently named her after Queen Victoria. The Bulgarian Viktoria studied at Vienna's University of Technology and then Dresden Polytechnic before returning to Sofia at the age of 24 to work as an intern at the Ministry of Public Works. She married another architect, Boris Vinarov in 1933 and they set up a practise together. Their home was destroyed in the Allied bombing of Sofia in 1944 and they moved to Veliko Tarnovo where Viktoria became ill with pneumonia from which she recovered only to die when the illness returned in 1947.

As well as working in the neo-classical style, she was responsible for a number of modernist buildings including the apartment block at 37 Moskovska Street, Sofia and the fabulous Sea Casino in Burgas. Her Moskovska Street building is just a short step from the iconic Alexander Nevsky Cathedral.  The austere grey facade is outstanding due to its series of balconies over the top five levels. Completed in 1937, each of these floors has three balconies, a semi-circular central one flanked by two more in the "Bauhaus" style with each one apparently accessed through a set of floor to ceiling windows. Several of the windows have been "modernised" but some originals remain.

Angelova won the Sea Casino commission through an open competition and designed a thoroughly modernist building with Art Deco influenced portholes and a roof terrace overlooking the sea as part of a general nautical theme. It opened to great fanfare in 1938 but was abandoned in the 1990's and left to deteriorate. It has since been restored, reopening in 2011 and now operates as a cultural centre with a programme of concerts, theatre, cinema, classes and other activities. The restoration received Bulgaria's Building of the Year Award in 2011. I was unable to visit Burgas during my recent trip but it is on my list for next time!

Vasko Vassilev was born at the beginning of the 20th century and came from a family of architects, his father having been the Chief Engineer of Sofia. Vasko studied architecture in Linz, Austria and began practising in the 1930's. He was known to mix with leading artists and had a collection of paintings received as gifts from some of the leading Bulgarian painters of the day. Vassilev was responsible for designing several apartment buildings in which he demonstrated a commitment to streamline design principles and which even today have a contemporary feel to them. Unfortunately, his career was cut short in 1948 when the Communist authorities banned private enterprise and his architectural office was forced to close. One of his buildings stands at 63 Vitosha Boulevard on Sofia's main pedestrianised shopping street. A late example of the modernist style it was built in 1948 as a housing association apartment block. It has retail on the ground floor with residential units above. Standing on a corner plot, it has superb curved windows, narrow balconies running the length of the facade and a rooftop terrace which must afford fantastic views of the mountains that surround the city.

Vitosha Boulevard is home to two more excellent modernist buildings that face each other across the pedestrian walkway. Both were designed by the uncle and nephew team of Radoslav Radoslavov and Konstantin Djangozov who like other Bulgarian practitioners had studied abroad this time in Paris under the direction of Auguste Perret. Perret was himself responsible for a number of modernist and Art Deco buildings constructed throughout the 1920's and 30's. Radoslav also attended lectures with Le Corbusier and it is known that they continued to correspond following the former's return to Sofia. Back to Vitosha Boulevard. The Nedkov Apartment building at number 48 was built in 1937-38. It is striking for its red and white facade and the glazing that runs the length of each floor, but for me the outstanding features are those exquisite white corner balconies that protrude from the edge of the building, drawing our gaze upwards and giving the building such a Mediterranean feel.

The Urumov building at number 59 has the same red and white facade with squared off balconies and a roof garden. It was completed in 1938-39. Imagine how desirable these apartments must have been back in the late 1930's...and how much they are now. The two architects also completed separate commissions. I particularly like Djangzov's office block in central Sofia. Occupying a corner plot, it is supported on stilts, has a roof terrace and trademark glazing running the length of the facade  which  ends in a superb curve.

In addition to the Facebook group, Vasil has worked with a number of friends to produce an exhibition focusing on 25 key Bulgarian modernist buildings with information in both Bulgarian and English perhaps making it possible for the exhibition to be seen overseas in future. It is also encouraging to note that some of Plovdiv's key modernist buildings are being promoted through the Alternative Plovdiv mapping project. Perhaps more well known for its Roman theatre and stadium and for its Bulgarian Revival buildings in the old town, Plovdiv also has some superb modernist buildings.

The white painted house at 9 Archimandit Damaskin was built in 1937 for Dragomir Tsankov, an industrialist and Chair of the Plovdiv Chamber of Commerce from 1938-43. Designed by Svetoslav Grozev it would not look out of place in Tel Aviv. Despite the peeling paint, overgrown garden and heavy duty security fencing surrouning the house, it remains supremely elegant with its roof top terrace, glazed stairwell and side balcony which must have once looked out over a pristine garden. Today it is flanked  by a busy dual carriageway but at the time of building it would have been on the edge of the city with cafes and shops on Otets Paisiy Street and fields on the other side.


The apartment block at 18 Tsar Alexander Street was built in the 1930's and designed by architect Stefan Todorov. It has a delightful scoop at the rear with a concave walkway/ balcony at each of the upper levels as well as a loggia at the front of the building. In addition to this there is a glazed stairwell and a curved staircase drawing visitors to the front door. Despite needing a little loving it really is a show stopper. Just across the road at 70 Gladstone, there is another modernist building - the Professional High School of Interior Design and Wood Processing, better known as the Industrial School. Also built in the 1930's it was designed by Svetoslav Grozev (who also designed the Tsankov House) and Dimitar Popov. A red brick structure, it has a spectacular glazed stairwell, a tiny balcony on the corner of the facade which mirrors the shape (although not the size)  of the canopy beneath.

Finally to Varna,  Bulgaria's third city which stands beside the Black Sea. I like Varna very much. It has the upbeat atmosphere of a popular seaside town, a delightful Sea Park and a range of architectural styles including ancient Roman ruins, art nouveau, baroque and of course, modernism. There are numerous modernist apartment blocks throughout the city, but perhaps the most striking, and possibly my favourite is the fabulous apartment block at 59 Primorski Boulevard. Known as "The Beach" and built in 1933, the architect responsible was Stefan Benedikt-Popov. It has the appearance of an ocean liner with long balconies at each level, beautiful original windows (at some levels) and a squared off tower which continues the seafaring theme. The upper levels have spectacular views across the park and over the Black Sea.


I need to thank Vasil once again for his time and help in Sofia as well as for answering my many questions about dates and architects for the buildings featured in this post. It was great to meet someone with so much enthusiasm and tenacity. Let's hope that over the next few years Bulgarian modernism will become as widely known as that of other European countries. The forthcoming exhibition will certainly help. We just need him to write a book now...

And to finish -  a bit of an Art Deco treat,  the dramatic staircase from the Winter Garden at Sofia's Bulgaria Hotel and Concert Hall complex, built in 1937 and designed by Stancho Belkovski and Ivan Danchov. Fabulous. 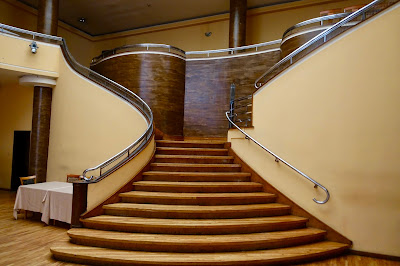 You can see more pictures from Bulgaria here.
Posted by Yekkes at 18:55