A Postcard from Guatemala 2 - The People In The Street

During my recent stay in Guatemala, I took a five hours photo walk through three villages in the company of professional photographer Rudy Giron. Rudy not only helped create opportunities for me to take pictures of many of the local people but also gave me some great technical advice. I chose to go on one of his walks after reading about sensitivities relating to photography in Guatemala, particularly amongst the Maya, the indigenous people who make up perhaps 50% of the population. Anxious not to offend anyone but wanting to come home with some great pictures, I thought that he could perhaps give some guidance. I thought correctly and through talking to and generally showing interest in the local people he made it possible for me to capture the best shots of my trip and to feel confident about taking them.

The three villages we walked through, are just a ten minutes drive from Antigua, Guatemala's former capital city and major tourist attraction. Despite the short distance, life has changed little in the last 100 years. The pace is slower, few tourists come and there is still a very strong sense of community. Many of the residents are Maya.

At first glance it seems that nothing is happening there but taking a closer look, there are many things to surprise and delight those who venture to visit. There is the constant "flamenco" of the women preparing tortillas for sale three times a day, patting the corn flour between their hands in preparation for cooking. There is the communal washing facility or lavanderia, an open air wash house with several stone units arranged in a square so that the women stand beside and opposite each other whilst working. I am certain the designer's intent was to facilitate the exchange of news and enable gossip without the evidence trail of Facebook. Then there is the industry of the tiny tailoring shop with three men squeezed into a dark, tiny room, working on aged but lovingly maintained machines and each with a tape measure draped around their necks. When entering the shop and greeting them with  "buenos dias como estas?" one of them looked up, replied and then proudly said in clear English "I am a tailor".
And we came across the absurd - a family gathered around a huge rabbit - as well as a man looking and laughing at us from behind a barred window. Some opportunities arrive by chance. As we descended a steep, narrow street, a door opened and out came three young women, dressed in their best clothes and about to go to a wedding. On show you might say. All real life and all inviting the attention of the camera.

The people we met generally fell into two types - those who were shy of the camera and those that loved it. Introverts and extroverts. You can see both in the pictures on this post. Towards the end of the afternoon, we came upon a family selling bread. The father, a teenage son and a little girl stood outside their shop and as Rudy chatted with the father we began to take pictures. The teenager became shy and turned away, putting his head down on the counter. But after a few seconds, a younger boy pushed his way through to see what was happening and became very animated, smiling, raising his arms and laughing. Then another, much younger child joined us, holding up his toy car for us to see whilst also looking beyond us to the activity in the street.

Some people need a little encouragement. We came across a Mayan family at one of the lavanderia and although friendly they were a little reticent about being photographed. We met them again later on and they were very different - all smiles and giggles as they posed happily, the youngest child pretending to be shy and peeping from behind her sister before emerging to look directly at the camera and demand her picture be taken. One little girl turned the tables on us. Whilst we photographed her mother making tortillas, she picked up a mobile phone and started taking pictures of us. An Eve Arnold in the making.

I have picked a handful of my favourites from the five hours photo walk based on the quality of the pictures and in some cases, being me, because of the story behind them. No portraits were taken without the permission of the subject and no pictures were taken of children without the permission and co-operation of the parents.  A big thanks to Rudy for his time and advice. You can see his website and book a photo walk here. Thanks also to the people of San Pedro Las Huertas,  Santa Catarina Bobadil and San Gaspar Vivar. You can see more photographs from Guatemala here.

In case you didn't believe me about the rabbit... 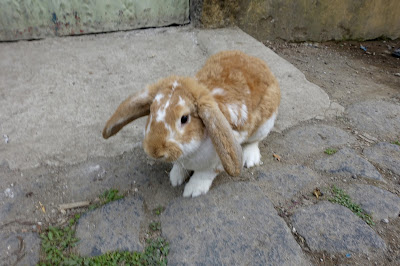