A Postcard From Guatemala - 1 - Art Deco In Guatemala City

Few visitors do more than just pass through Guatemala City on the way to more established tourist destinations such as Antigua, Lake Atitlan and Tikal.

The city gets a bad press, a hangover from the dark decades of civil war that ravaged the country between 1960 and 1996. True, it lacks the glamour of better known Latin American capitals such as Buenos Aires or Mexico City and there is a definite grittiness about the place but a couple of hours spent walking around the historical centre convinced me that the city is worth a longer look, in large part because of the astonishing number of art deco buildings clustered around Avenida Sexta (6th Avenue).

The Avenida was long the most fashionable street in the city, with its mid nineteenth century structures and plethora of art deco buildings from the 1920's and 30's including department stores, cinemas and cafes. Unfortunately it was colonised by street traders during the 1980's to the extent that it became difficult to get into the shops or even stroll along the pavement. Many long established places closed as a result of this and the Avenida deteriorated. The decline was arrested in 2009 when the traders were cleared, trees planted and traffic banned. There is still much to do to improve things, not least removing the trashy signs that adorn the facades of many of the most beautiful deco buildings but it is easy to imagine the Avenida in the 20's and 30's when it must have matched any European boulevard.

Edificio La Perla stands at the junction of Avenida Sexte with Parque Central, the city's main square. Built in 1927 for the Asturias family it originally contained residential units on the upper levels and retail on the ground floor. La Perla was designed by a trio of German architects - Robert Hoegg, Wilhelm Krebs and Anton Holzheu and was recognized as a National Heritage building in 1970. The facade has several decorative elements including trapezoid columns, stylised lettering bearing the building's name at the top of the central tower and linear moulding showing the separation of levels.


Moving away from the main square, Edifico Engel occupies another corner spot on the Avenida. It was built for a German Jewish businessman called Enrique Engel. Engel came to Guatemala in 1892, following his father, Jacobo, who came to the country via San Francisco initially to sell costume jewelry. Things went well and the family established a shirt factory and opened the Guatemala's first department store. Enrique went on to become the leader of the German-Jewish community, established a cemetery and used his influence to enable a small number of Jews to enter the country just before the Second World War.  I have been unable to confirm the date of construction, with different sources quoting 1937 and 1950 as the date of completion. Quite a difference, although I suspect the relative simplicity of the design would place it more at the later date. I have also been unable to find details of the architect. Anyone reading this who can supply this or other information about the buildings in this post is very welcome to add them in the comments section below!

A little further along the Avenida we come to two cinemas. The Lux and the Tikal. Designed by Rodolfo Bader, Cine Lux was completed in 1936.  Since 1956 it has operated as the Centro Cultura de Espana, showcasing Spanish cultural activity in the city. The Tikal has fared less well and despite retaining its jolly lettering and beautiful blue mosaic tiles on the facade, it looks a little sad with the ground floor now occupied by cheap shops.


Imprenta Hispania is possibly the most beautiful art deco building in the Centro Historico. Originally a publishing house, it is located in Avenida 5 and visible from Avenida 6, its blue facade is a delight with its deco swirls, speed stripes and fabulous lettering which runs both vertically and horizontally. Completed in 1927 it was designed by the already mentioned Wilhelm Krebs, one of several German architects responsible for the city's collection of art deco buildings. 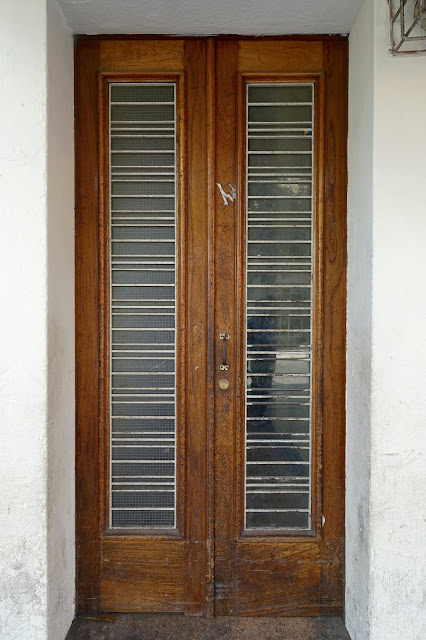 Elsewhere in the old centre, it is hard to walk down a street without spotting at least some deco features. Look up to find beautiful balconies and stylised lettering and peep behind the cardboard signs to find exquisite deco doors. And it's not just in the centre that you can find these treasures. I stayed in Zona 10 and discovered the building pictured below, just a short step from my hotel. No details of its original function but today, almost shamefully, it is being used as a car parking space. Zone 10 is a trendy, affluent zone with many cafes, bars, restaurants and fancy shops. Surely better use could be made of this elegant building with its rotunda, curves and speed lines, than just a car park?

Guatemala City's art deco heritage must be one of the country's best kept secrets. It is one that needs sharing and that could help attract more visitors and more investment to the city. I am unaware of any groups or individuals working to promote this part of the built heritage but would love to hear from anyone who knows otherwise. In the meantime, some more pictures to enjoy...