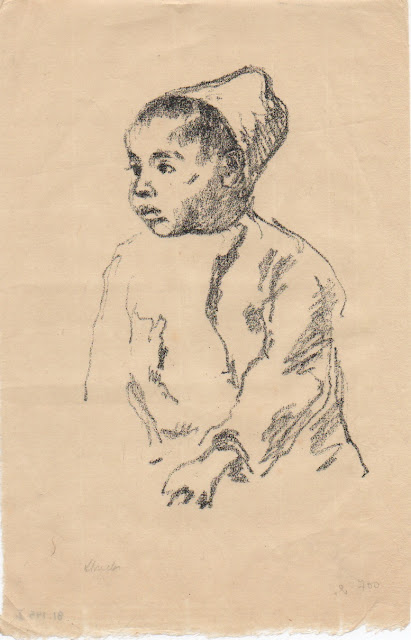 I bought this drawing of a young Maghrebi Jew in one of my favourite Jerusalem shops - Trionfo in Dorot Rishonim that runs off the very busy Ben Yehuda pedestrian street. I have found many little treasures there over the years including books, postcards and posters, many of them related to the Bezalel School of Art and its golden era in the first few decades of the twentieth century. This simple pencil drawing on tissue paper is my latest acquisition, its delicate pencil lines capturing beautifully the expression of a child in contemplation.

Budko was born in Plonsk, Poland in 1888 and studied at the Vilnius School of Art (now in Lithuania), before moving on to Berlin in 1909. In the following year he began to study engraving at the educational wing of the Berlin Arts and Crafts Museum under the direction of another great artist - Hermann Struck. In the 1920's he began to shift his focus from crafts to painting. He emigrated to Eretz Israel in 1934 and spent his first few months at Kibbutz Ein Harod where he produced a number of prints focusing on the theme of Halutzim (the pioneers). There is a significant museum at Ein Harod which holds some of his work.

Moving on to Jerusalem he found the time to experiment with colour to capture the strong light and mood of the landscapes surrounding the city as well as working as the director of the Bezalel School for Arts and Crafts in Jerusalem. He held this post until his death in 1940. Budko also produced a significant portfolio of graphic material including woodcuts, etchings and drypoint works and illustrated the work of several stellar writers. Examples of this include Heinrich Heine's Psalms of 1919, Bialik's Babylonian Talmud (1924) and works of Sholem Asch, David Frischmann and Sholem Aleichem. He often integrated Jewish symbolism into his work and made use of Hebrew letters in his illustrations,  recalling his early life Eastern Europe, drawing on his experiences of that world to depict figures from the shtetl.

Josef Budko does not have the profile that some of his Bezalel colleagues and contemporaries enjoy today but it is possible to see some of his work in the Israel Museum in Jerusalem and the Jewish Museum in Berlin is home to one of my favourite works of his - Two Women.