I first visited the Palais de la Porte Doree several years ago to see an architectural exhibition. I did not have much time and I remember it was a very wet day so there was no real opportunity to look at the building itself. I put that right last weekend when I revisited Paris and had a good look at this very beautiful building originally built for the Paris Colonial Exhibition of 1931. 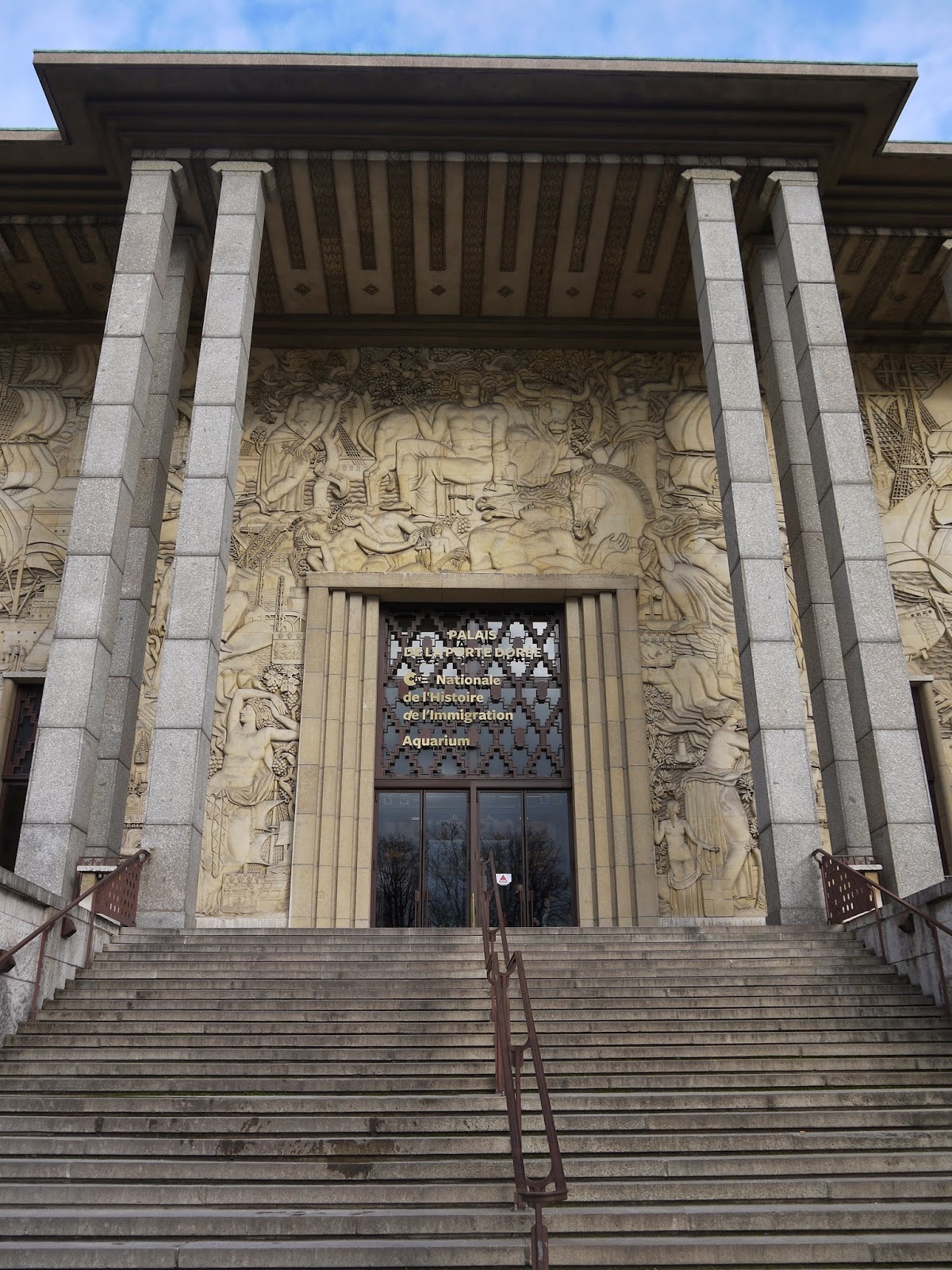 The Exhibition was intended to showcase the resources of the French colonies and the diversity of their people. It lasted six months and is said to have sold 33 million tickets for its programme of activities. The French government brought people from each of the colonies to demonstrate their crafts, culture and architectural styles. This also involved something referred to as a "human zoo" with Senegalese people being brought to Paris to create a "village" which shows how the times have changed.

The Palais is the only remaining building constructed specifically for the Exhibition. It is an imposing structure overlooking the Bois de Vincennes. Designed by architects Albert Laprade,  Leon Jaussely and Leon Bazin it is now home to the Cite national de l'histoire de l'immigration, a museum that tells the stories of the many migrants that eventually came to live in France from both the former colonies and elsewhere. The front of the building on Avenue Daumesnil features a long colonnade with squared columns backing onto an intricate and visually stunning series of bas-reliefs which were the work of Alfred Auguste Janniot. The stylised images include the peoples, flora and fauna of the former colonies. The workmanship is exquisite with sharp, clear lines, depth and movement. Janniot was also responsible for the freezes on the Maison Francaise in the Rockefeller Centre in New York. 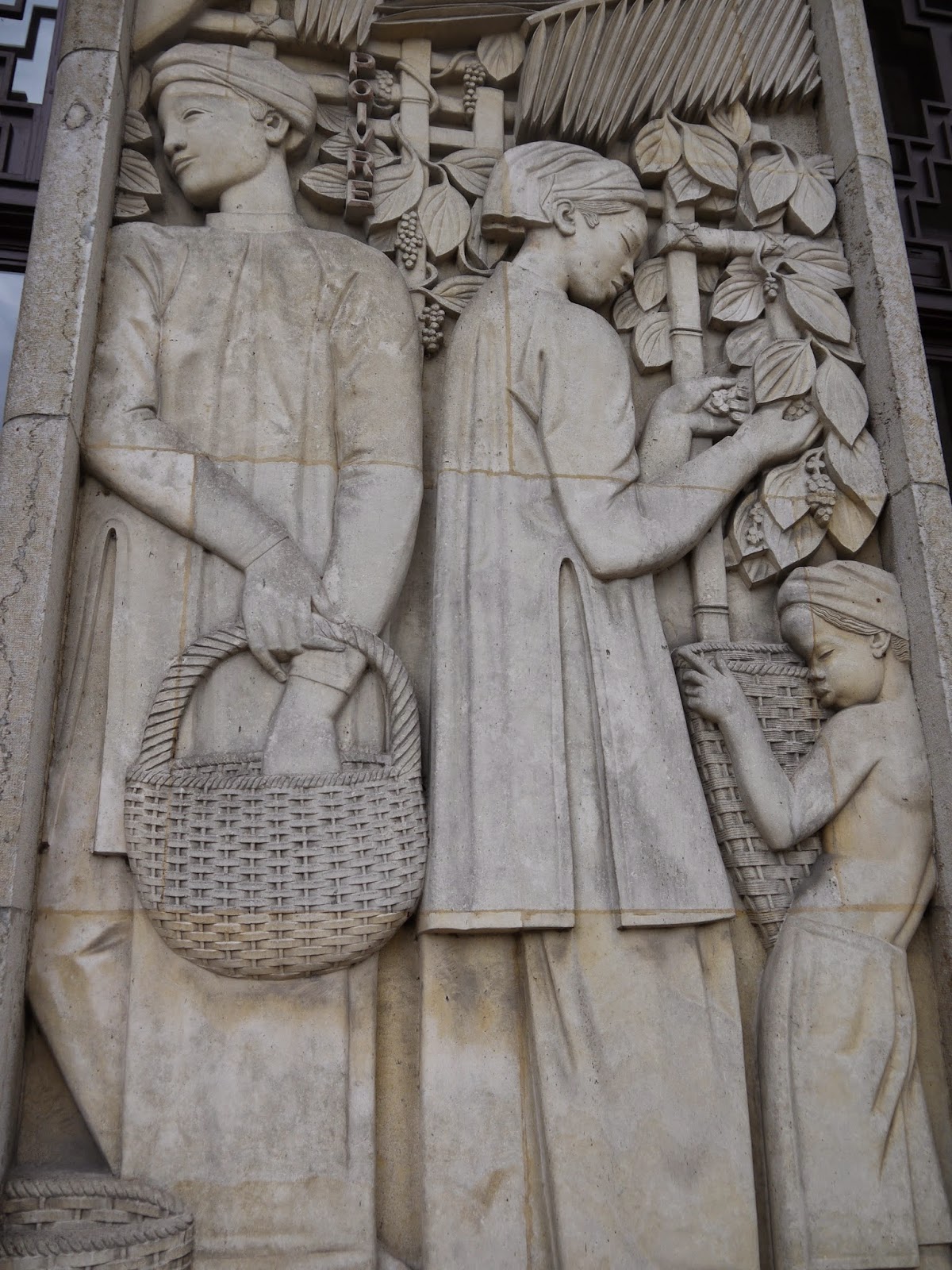 Architect Laprade had direct experience of the French colonies, having worked in Morocco as assistant to Henri Prost. Working in Casablanca's town planning service, Laprade re-designed the city's Great Central Park before going on to design colonial administration buildings, parks and sports grounds in Rabat. He was to incorporate local Moroccan motifs into other projects in future years. Laprade's colleague, Bazin also worked on a number of significant buildings including the famous but sadly demolished  garage on the Rue Marbeuf in Paris and the Echo du Nord building in Lille.

The exterior of the palais is indeed stunning, but for me the visual highlight is the grand salon with its brightly coloured murals painted by French artist Pierre-Henri de la Ducos Haille. The murals continue the colonial theme of the external freezes with representations of justice, commerce, industry and science. Again, it is unlikely that these images would be deemed acceptable in today's world but the colours and the symbolist representations of different themes are striking. The murals continue up into the galleries ranged above the salon and there is a small exhibition of promotional materials from the 1931 exhibition on one of the upper levels. The galleries are accessed by an elegant staircase with a decorative metal rail which follows the attractively curved rise. The steps also have delightful decorative details. Whilst in the grand salon visitors should look up. The riot of colour on the walls commands immediate attention but the ceiling is yet another highlight with its recessed levels and contrasting colours. 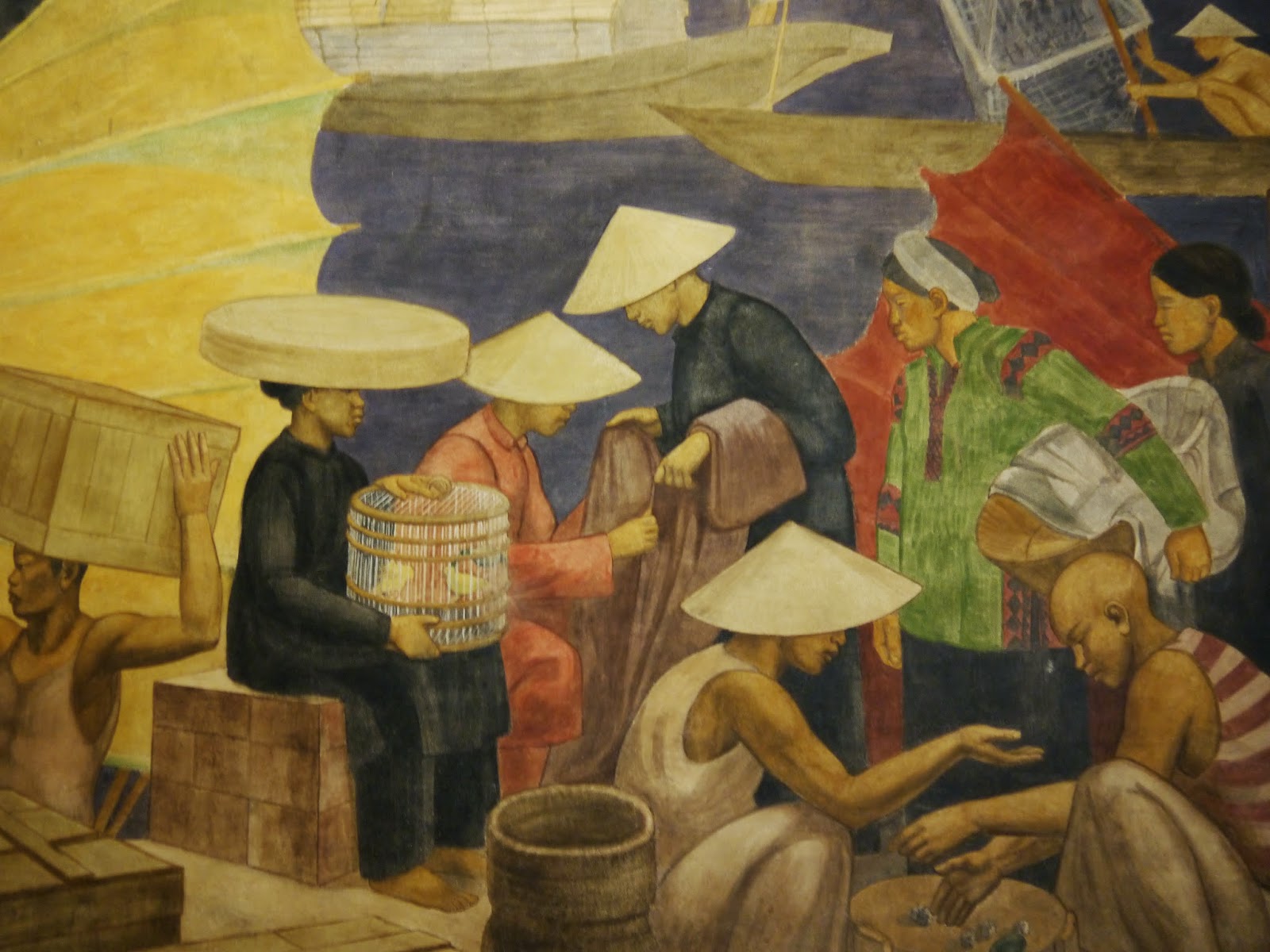 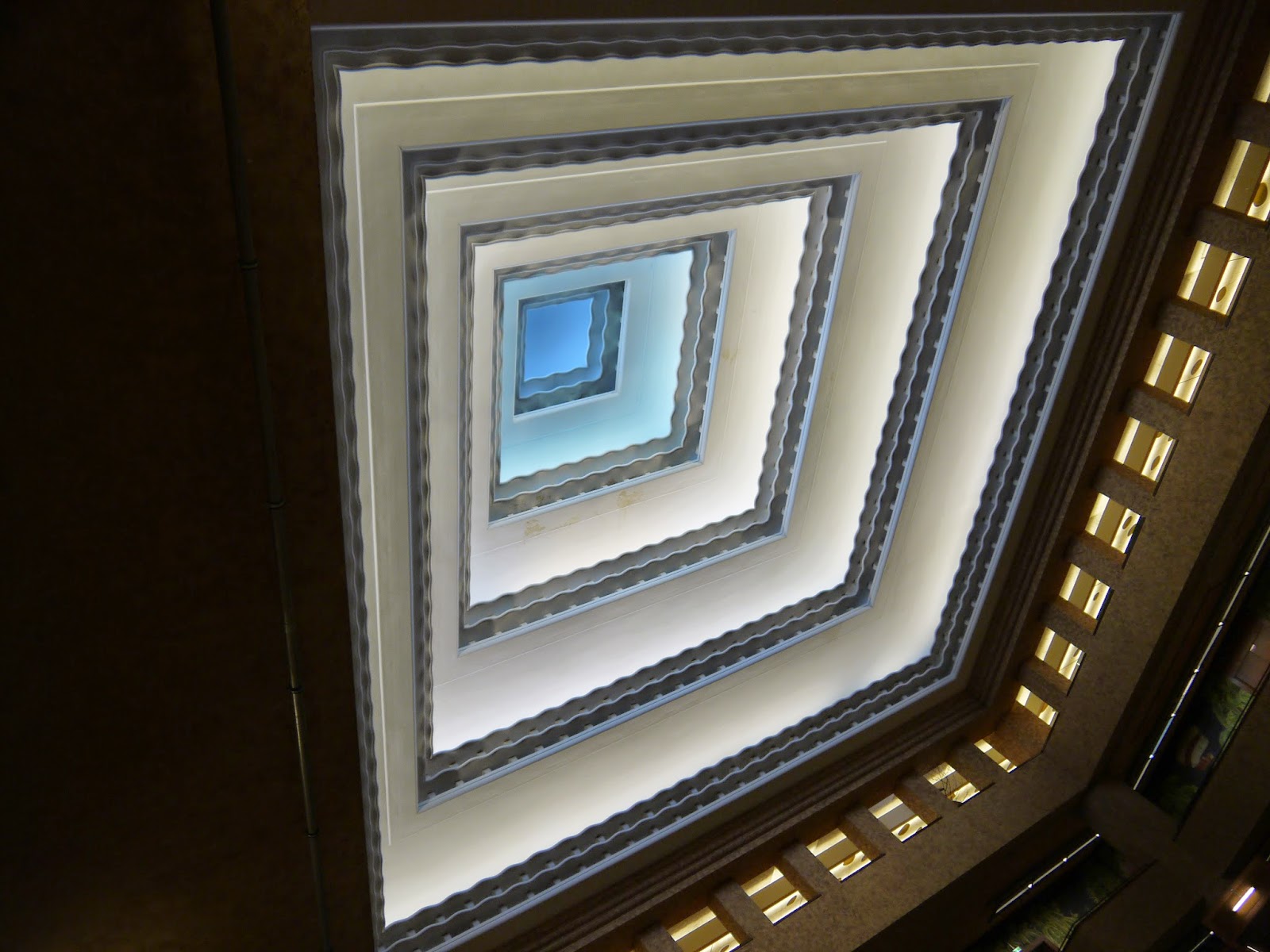 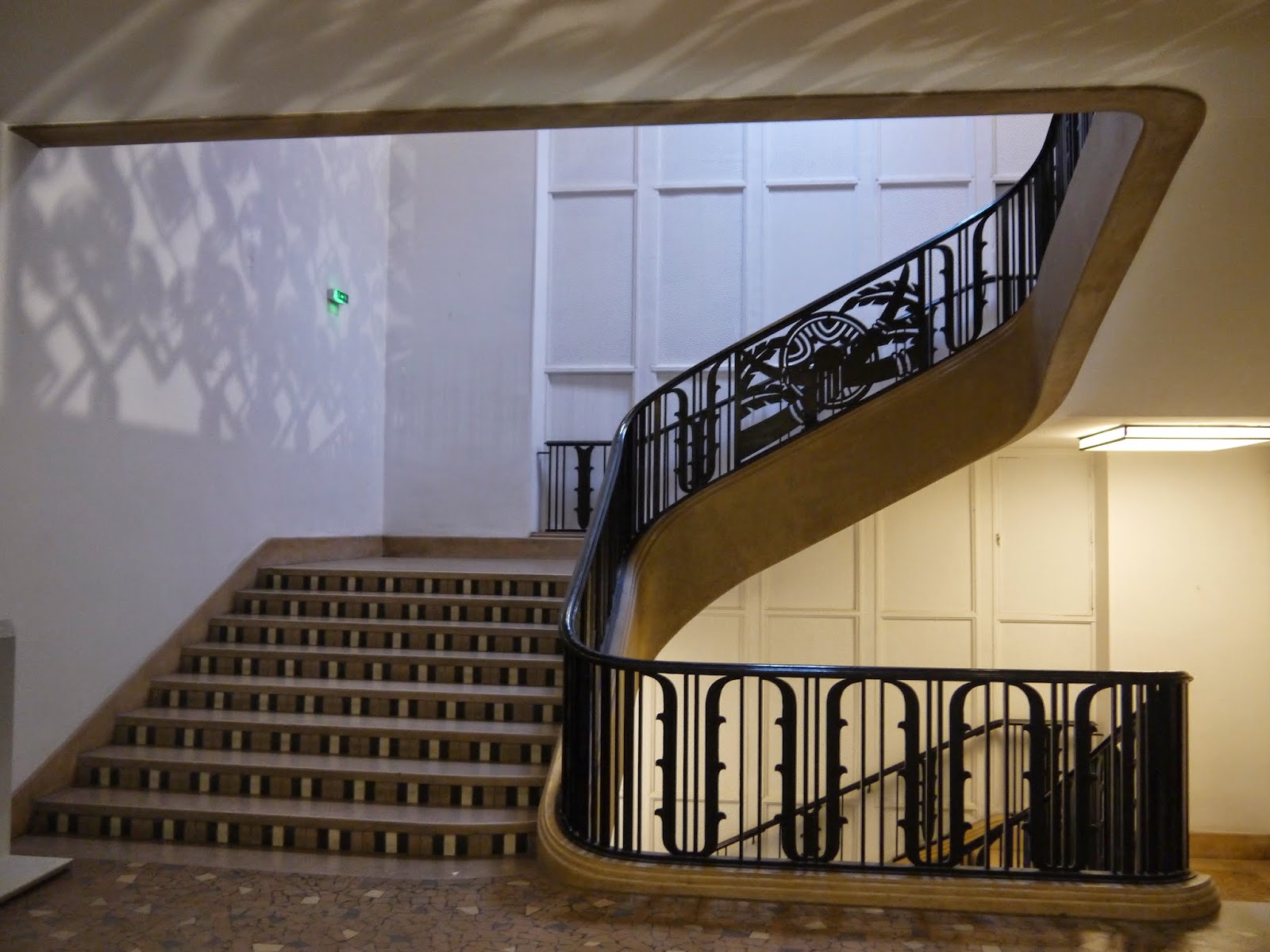 The grand salon is the centre of the building but there are elegant smaller salons at each end of the buildings. It is not possible to enter the smaller salons, but visitors can see inside from the entrances.  The list of interior designers who worked on the salons and other parts of the building reads like a Who's Who of French design and includes Emil-Jacques Ruhlmann , Paul Reynaud, Eugene Printz and Jean Dunand.

The Palais also has a cafe which during the summer months opens up onto the terrace ( a bit cold in January for that), and a book shop which carries at leads a couple of titles on the building, albeit only in French. For many years the building was home to the Musee national des arts d'Afrique et d'Oceanie, the collections of which are now housed at the Musee de quai Branly. The Palais appears to have fund its niche with its current focus on the story of immigration, which together with the wonderful building means there are two good reasons to visit. 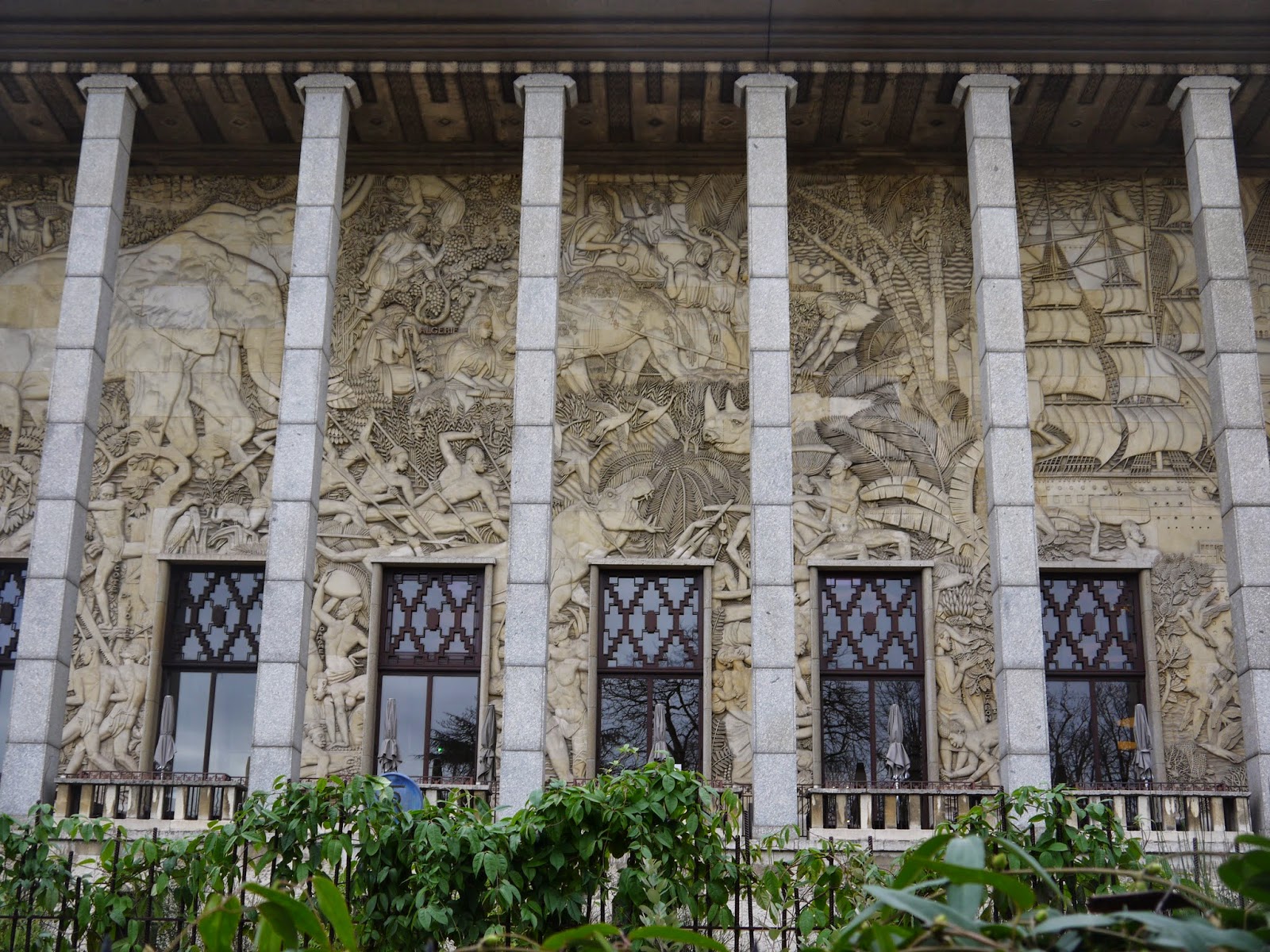 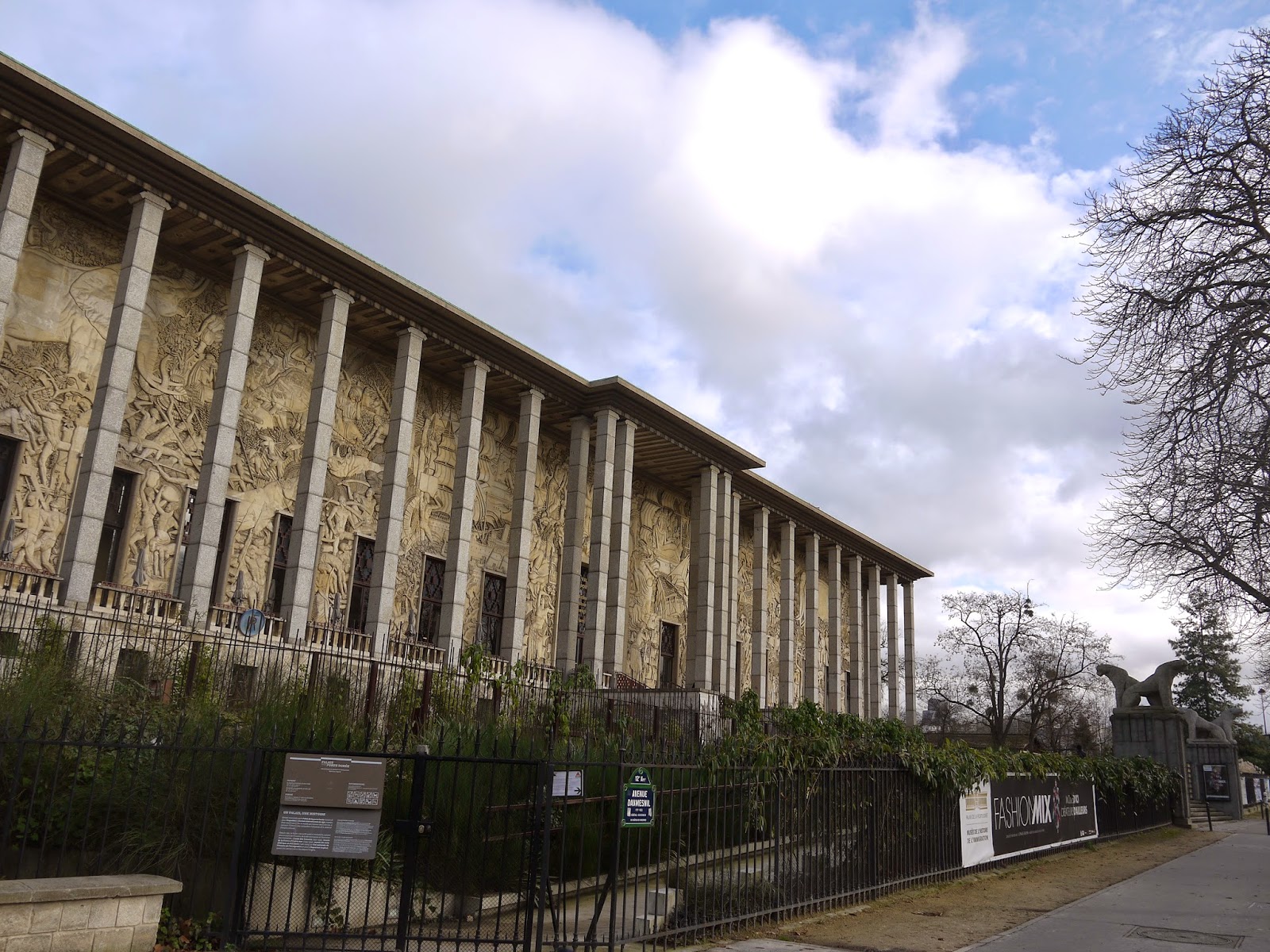 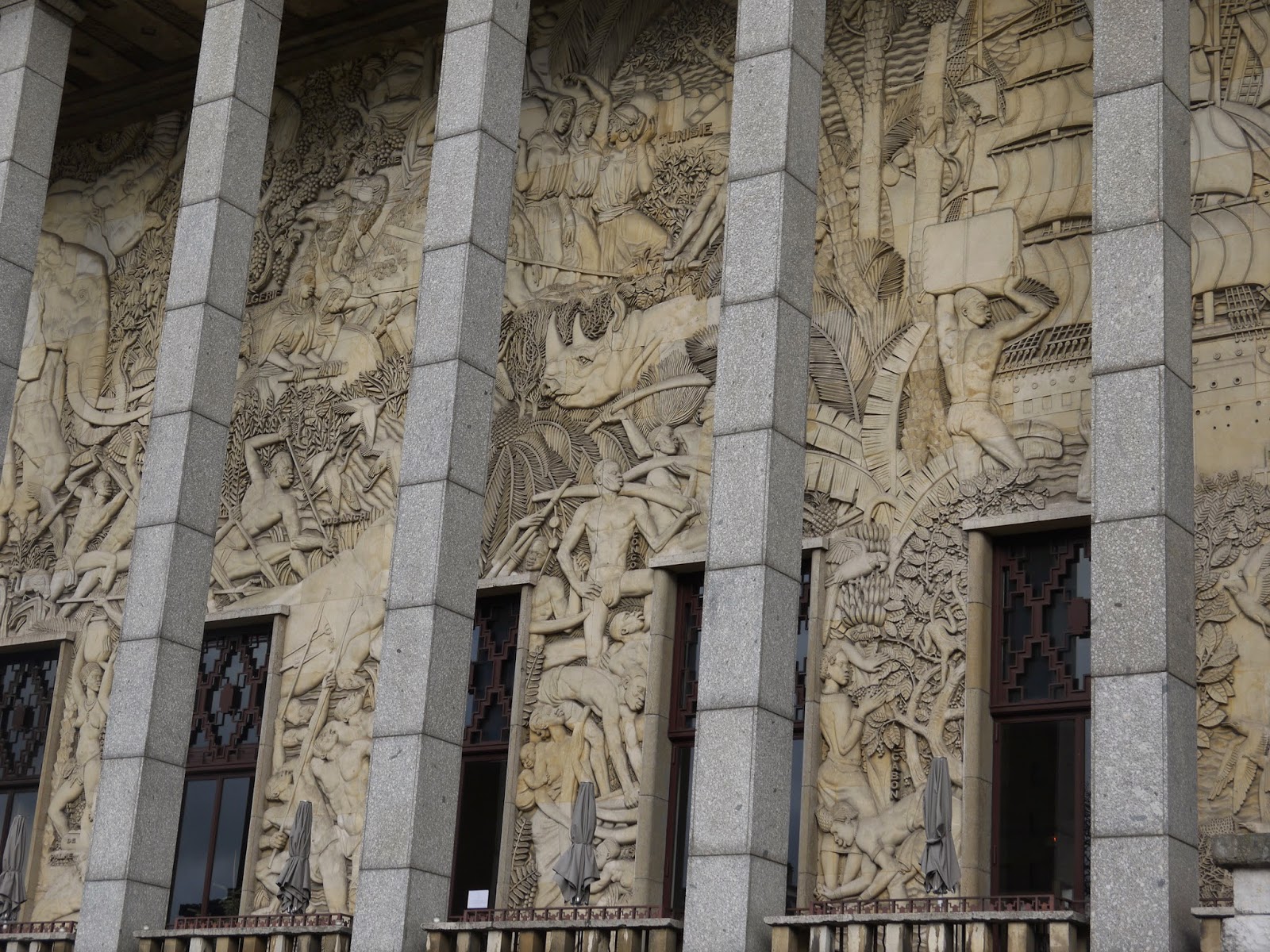 You might also like More Paris Modernism - Mallet-Stevens, Le Corbusier and a modernist surprise.
Posted by Yekkes at 17:09