One of my favourite travel experiences is to wander around a city happening upon unexpected places. On my recent visit to Paris, I did some strolling in the 14th and 15th arrondissements as well as the more central neighbourhoods and found some new favourite places away from the main tourist centres.

I discovered a little street called Villa Santos-Dumont after having been to see the Groupe Scolaire and College Modigliani at Rue Cherbourg. Purely by chance, I wandered into this little piece of Parisian paradise with its beautiful trees, whitewashed buildings and artists'  houses. The area was once a vineyard and the street still has a country village feel to it. Designed by architect Raphael Paynot and built in 1926 it was originally named Villa Chauvelot, going on to acquire its current name in 1943 in honour of the Brazilian aviator Alberto Santos-Dumont. It attracted a number of artists already resident in Montparnasse including Ossip Zadkine (who lived at number 3), Fernand Leger  (number 4), Viktor Brauner (number 10 bis) and Malvina Hoffman (number 25). Villa Santos-Dumont was a real find - quiet and peaceful and full of houses and studios where it was very easy to imagine sitting reading, listening to music and enjoying coffee and good bread (or possibly cakes). The only company I had was a sleek, brown coloured and not entirely friendly Abyssinian cat keeping guard over one of the doorways.

Having had an early start, I was hungry and had lunch at Besame Mucho, a small Mexican restaurant at 60 Rue des Morillons, just around the corner from the Villa. Decorated in bright colours that reminded me of my time in Mexico City last year, I was drawn in by the mention of quesadillas on the menu displayed in the window. Mexican food in London  can be a real disappointment - its often very oily and lacks the sharpness of the real thing. No such trouble at Besame Mucho, probably because the restaurant is owned by a very friendly Mexican couple, Paul and Desiree, who have lived in Paris for 12 years and cook for their guests as they would cook for themselves.  Desiree told me they had also lived in London and reminisced about some of the time spent on the Northern Line in the old "misery line" days. As well as my delicious cheese quesadillas I enjoyed a very light flan and a couple of strong coffees before going on my way. The restaurant, which is decorated with Mexican artefacts and pictures has a varied menu of real Mexican dishes and is very much recommended.

I visited a Le Corbusier building in the 14th arrondissement - the house and studio of the artist Amadeo Ozenfant on Avenue Reille.  Square Montsouris is a beautiful, private street (despite being called a square) adjacent to Avenue Reille and takes its name from the nearby Parc Montsouris. Built between 1920 and 1930, several of the buildings have at least some art deco features whilst others have elements  from the earlier art nouveau period including decorative ceramic details. In addition to Ozenfant having lived on the corner in the Le Corbusier building, the square has been home to a number of other artists including Tsugouharu Fujita who lived there in 1928 whilst Roger Bissiere was a resident during the 1930's. Like Villa Santos-Dumont, the square is very green and has the feel of a village rather than a street in one of the world's busiest cities. The park is at the end of the square and is a good place to sit for a while after a morning spent exploring the area. After visiting the square and the adjacent Rue Georges Braque which has a couple of great modernist buildings, I enjoyed a rest and a drink at Cafe Chin Chin,  on Avenue Reille, a small cafe bar opposite the park with good opportunities for people watching.

I found a third Parisian secret when visiting the Musee Mendjisky Ecoles de Paris in Square Vergennes, another private street. As well as being home to the beautiful modernist museum designed by Robert Mallet-Stevens  it also has a number of interesting private homes, some with deco features. My favourite private home in Square Vergennes is located at the very end of the street (which like Square Montsouris is not really a square!). The facade is rendered in cement with white details including stars at the upper level where there is also a blue panel and blue diamond shapes. The blue and white theme is also played out on the ground floor with a blue line following the outlines of the doors and windows. All that I have been able to find out about the building is that it dates from 1927, so if anyone knows anything else, please let me know in the comments box!

My other discoveries relate to food! To be more precise they relate to cake What else? I visited the wonderful Paris 1900 exhibition at the Petit Palais - arriving an hour before the museum opened on the Saturday morning after not managing to get in the day before as the queue snaked around the building. After seeing the exhibition and after browsing the museum shop, I wanted coffee and cake. I had noticed an external passage with ceiling paintings behind the main reception area and went to investigate before searching for a cafe. Entering the passage, not only did I see a sign for a cafe but also a beautiful garden with ponds surrounded by blue and gold painted ceramic tiles. The terrace cafe has great views of the Palais' exquisite and very Parisian dome. The cafe did not disappoint either. Good coffee, macaroons, tiny pain au raisin and a mango cream were all very acceptable and reasonably priced by Paris standards. Of course, there were two of us and not all of the treats were for me! Honest.

Despite the many changes of recent years, some of them not for the better, I still love the Marais. One of the recent developments that I most certainly do approve of is L'eclair de genie, an eclair shop in Rue Pavee. I have seen queues outside the shop, so its clearly no longer a secret with its selection of  passion fruit and mango, raspberry, pistachio and of course chocolate and coffee eclairs. Some have gold leaf on the icing! The eclairs are not cheap at 4.5 euros each but they are little works of art that are worth splashing out on. A little further along the Rue Pavee there is another gem - the Synagogue of the Rue Pavee, designed by Hector Guimard and built in 1913.

Finally, a picture that demonstrates Parisian eccentricity - also in the Marais. Strolling along Rue des Francs Bourgeois I could see a crowd gathering and hear music playing before seeing the character in the picture below. There's always something different in Paris… 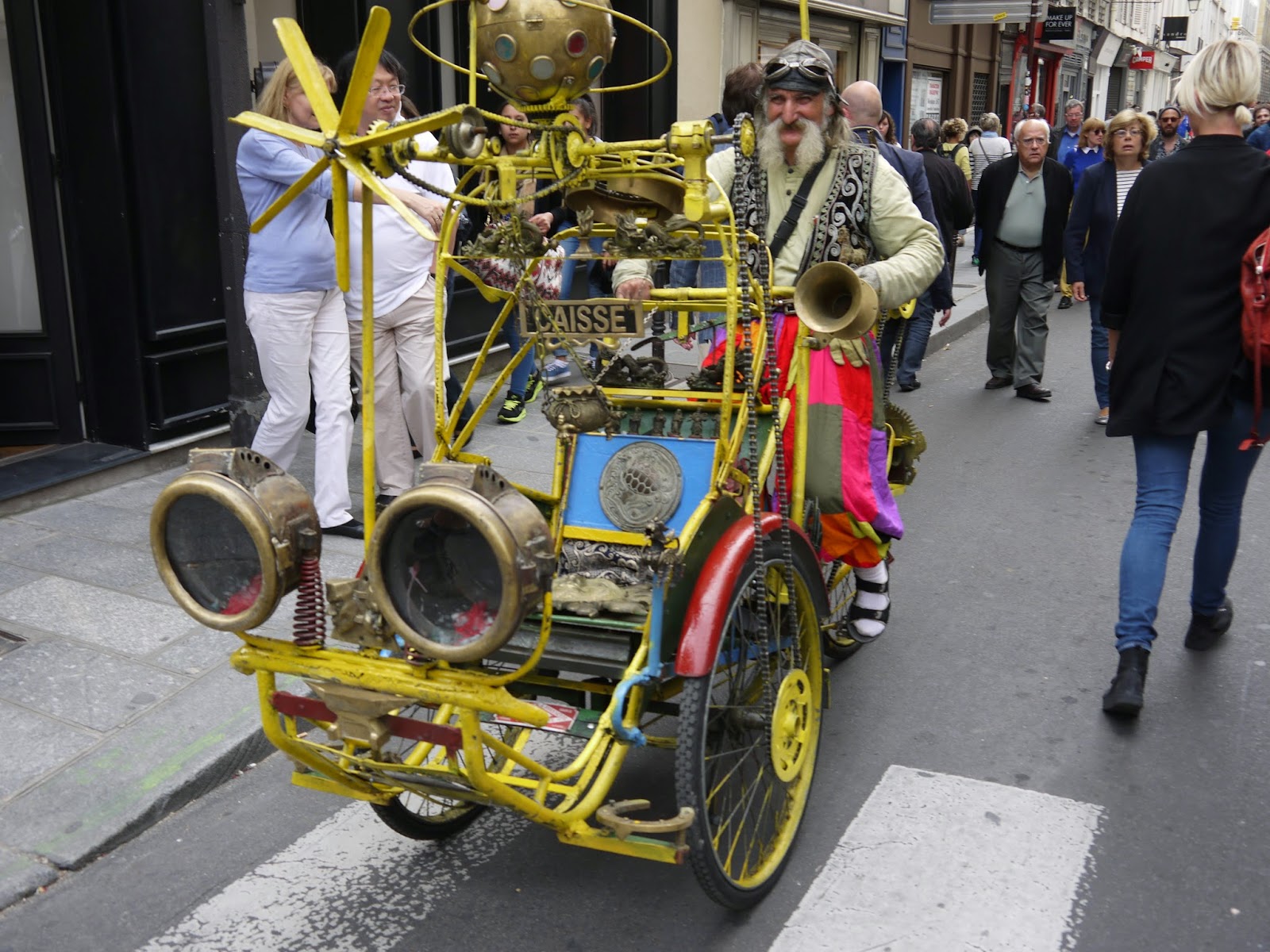 You might also like Villa Seurat, a Parisian secret and A House of tiles in Paris
Posted by Yekkes at 20:51