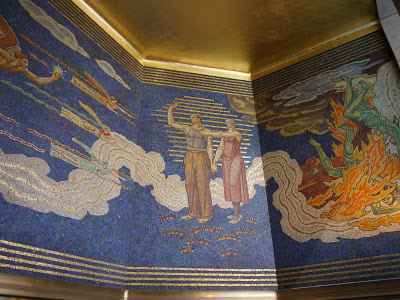 This beautiful art deco piece completed in 1933 was the work of American muralist Barry Faulkner. It sits in the lobby of the former RCA Building, now the GE building and part of the wonderful Rockefeller Centre complex, at 1250 Avenue of the Americas on Manhattan Island, New York City.

Entitled "Intelligence Awakening Mankind", like much of the art at the Centre it is allegorical. Its theme is the triumph of knowledge over ignorance and the central figure (not shown here) "Intelligence" is seen presiding over all activity.   The idealised male and female pictured here representing a healthy and forward thinking humanity, welcoming figures representing "Thought" and "Science" whilst turning their backs on "Poverty" and "Fear" - horned creatures seen disappearing into the flames. Interstingly, "Philosphy" "Hygiene" and "Publicity" are also represented - showing the importance of getting your message out (publicity) and of a clean body as well as a healthy and stimulated mind! The mural also has figures representing science and literature and encourages creativity, new ideas and intellectual effort as the way to create new knowledge and to advance civilisation. Interestingly, the male and female figures would probably have been at home in either Soviet or fascist architecture of the period - note the salutes they are giving to the bringers of knowledge. It was the 1930's after all.

I love the bright, vibrant colours of Faulkner's mural with its wonderful deep blue background and gold elements. The stunning effects are achieved through the use of one million small glass tiles in 250 different colours -all of them hand cut and hand set. The material is glass tesserae and the mural is an impressive 79 feet long and 14 feet high. I spent a long time studying the detail of the mural on my trip to New York last year - almost being left behind by the guide who led the tour of the Rockefeller Centre. Its worth taking the tour to access some of the behind the scenes parts of the complex and also to pick up on some of the many interesting stories attached to the place.

I especially liked the story about the Rockefeller family (staunch and tea-total Baptists), having campaigned for prohibition, then changing their minds and campaigning for its repeal. This was because the underground drinking resulting from prohibition was accompanied by a range of other illegal, sinful and often dangerous (to participants and passer-by!) activity controlled by the mob. A salutary tale and one that may demonstrate the theme of the mural - the triumph of knowledge over ignorance!

You can see more detailed images from the mural here, here and here. The Rockefeller Centre is probably my favourite tourist attraction in New York. Everyone knows about the fantastic views form the "Top of the Rock", but the highlight for me is the wonderful collection of murals inside and outside of the buildings, the stories that go with much of the art and the wonderful record of 1930's American art deco that the Centre represents. Oh, and there's a great bakery called Bouchon, just across from the Centre too. More New York stories here. I can taste that sweet cheese pastry and strong coffee already.
Posted by Yekkes at 09:48