So, here I am back in my second home, Tel Aviv. On my first day in the city I found a fantastic new  book - Sand and Splendor: Eclectic style architecture in Tel-Aviv by Tami Lerer and suitably inspired I decided to revisit some of my favourite buildings in this style and to track down some I wasn't familiar with

First a note about the Eclectic style. Everyone knows that Tel Aviv is famous for its truly stunning collection of Bauhaus buildings from the 1930's but few people know about the equally impressive collection of Eclectic style jewels from the preceding period. Eclecticism was a worldwide style that gave consideration to the component parts of other styles, going on to create a new architectural language. In Tel Aviv it was a vehicle for creating a new city with a particular identity, making use of a number of architectural elements in order to do so

This included extensive use of Jewish motifs in the first modern Jewish city for two millennia and  symbols such as the menorah and Magen David, rarely seen on the exterior of buildings in the diaspora began to appear as decorative elements on many Eclectic buildings. Unlike Bauhaus, the Eclectic style makes great use of decorative detail and of colour using it to add depth and shading. A  number of recently restored buildings have included a return to the original colours, often green, yellow, blue and even orange

The Eclectic style also makes reference to classical architecture with its use of symmetry, sub divisions and various structural motifs including hanging balconies, arches, domes, bay windows and corbels. Furthermore, it is possible to "read" the facade of the building with the range of uses between floors being easily discernible, often with commercial use at ground floor and residential above

And so to the buildings, 800 of which currently benefit from the protection of preservation orders. I will write about a few of my favourites here. Allenby Street is not one of Tel Aviv's fashionable streets these days. In fact you could say its downright unfashionable, gritty with cheap shops, crumbling buildings and the occasional beggar. However, I rather like Allenby and if you look carefully you will   see that it holds some architectural treats. Number 46 is the site of the Mann House, built from 1929-1930. It has been cleaned and undergone some restoration since I was last here

The most attractive feature of the Mann House (pictured below) is the unusual brickwork, especially the panels above and below the balconies where the bricks lay lengthwise rather than widthwise. The corner of the building is also striking with small triangular balconies and again, interesting brickwork
that projects from the building rather than forming a flat surface. The ground floor retains its original
.commercial function with the upper levels divided into apartments Still on Allenby at number 89 is the now closed Moshav Zekenim Synagogue (pictured below). Built in 1928 and designed by Yehuda L. Magidovitch, I have tried unsuccessfully to get inside for several years. Thanks to one of my good contacts in Israel the synagogue will be open in May this year as part of an Open House season - unfortunately I will be back home then. Another time maybe. But what about the building? The most striking feature is the richly detailed facade which features beautiful  Bezalel ceramic tiles as well as three arches. The middle arch is the star of the show with decorated pillars, stained glass windows featuring the Magen Dovid and Hebrew lettering above the door bearing the synagogue's name Magidovitch was born in 1886 in Uman in the Ukraine, now the site of annual pilgrimage by thousands of  Hasidim - not because of Magidovitch having been born there but because it is the site of the  burial of Rebbe Nachman, the Bresler rebbe. Magidovitch studied architecture at the Odessa Academy and graduated in 1910, emigrating to Eretz Israel in 1919. His experience as an architect earned him the post of Tel Aviv's first city engineer in 1920, a post he held until 1923 but he continued to make his mark on the city's built legacy for many years after that

Staying with Magidovitch, a new favourite building for me is Pensak's Passage at 16 Herzl Street.  Herzl is another street that is not the beauty it was in its younger days but I detect an upward turn in its fortunes as when looking for a couple of the buildings for this post I was struck by the number of new and busy cafes it now hosts. The Pensak Passage (pictured below) built in 1924 was the the first Tel Aviv building planned for commercial and office space. It has an imposing facade displaying some of the key elements of the Eclectic style including symmetry, balconies and other decorative elements such as the building's name in both Hebrew and English. The inner courtyard is accessed through a narrow   gate at the centre of the building. It was locked when I visited and I was about to walk away disappointed  until I realised that the man behind the juice bar further along Herzl, waving and calling, was waving and calling to me to tell me the code for the entry panel! What a stroke of luck Climbing the stairs I noticed that some of the original features remain although the interior is somewhat shabby now. The signs on the wall directing visitors to the country's first elevator are still there, as are  some of the original decorative elements on the floor.   However, the most amazing site of all was the remaining elevator shaft (pictured below) still standing proudly in the light and airy courtyard and visible from every level. I would never have imagined that this lay hidden behind the facade of the. building which now appears to be mainly residential. I want an apartment here Further along Herzl at numbers 72 and 74 stands the Mograbi House, the work of our friend Josef Berlin. Built in 1925, it displays a number of classic elements of Eclecticism. The ground floor is given over to commercial use with residential space above. The building consists of two symmetrical blocks  each with a pair of bay windows and slender balconies. But perhaps the most interesting features are the corbels, or brackets some of which support the balconies whilst others have a purely decorative purpose. The Moghrabi House has become another favourite of mine - I think it might be because of  those unusual and coquettish window blinds that remind me of very large false eyelashes (pictured below!). Berlin was born in what is now the Ukraine in 1877 and only came to Eretz Israel at the age of 44. He was responsible for many buildings in Tel Aviv, opening his own practice in 1924 with architect Richard Pasovski and training some of the major architects of the Bauhaus period including Zev Rechter, Arieh Sharon and Joseph Neufeld Another  stunning Josef Berlin building is the art deco influenced Ravnitzki House  at 80 Ahad Ha'Am   Street at the junction with Mazeh Street. The most immediately striking features are those around the wooden doors which are decorated with fan-like brickwork set at an angle and making a clear reference to art deco.  Although not visible from the outside the difficult site, which is trapezoid in shape and has height differences, allowed for the construction of a basement with a garden below street level.  The  garden is quite mature with well established trees that make it easy to miss this wonderful example of the eclectic style - so look out for it. This is possibly my favourite Eclectic building in Tel Aviv and I can understand why its serene attitude would be a good place for the poet Ravnitzki to live and work. Like Berlin, Ravnitzki was also born in the Ukraine, but in the cosmopolitan city of Odessa. He went on to become the founder of the Moriah publishing house, was a founder member of the Hovevei Zion organisation  and worked with national poet Chaim Nachman Bialik 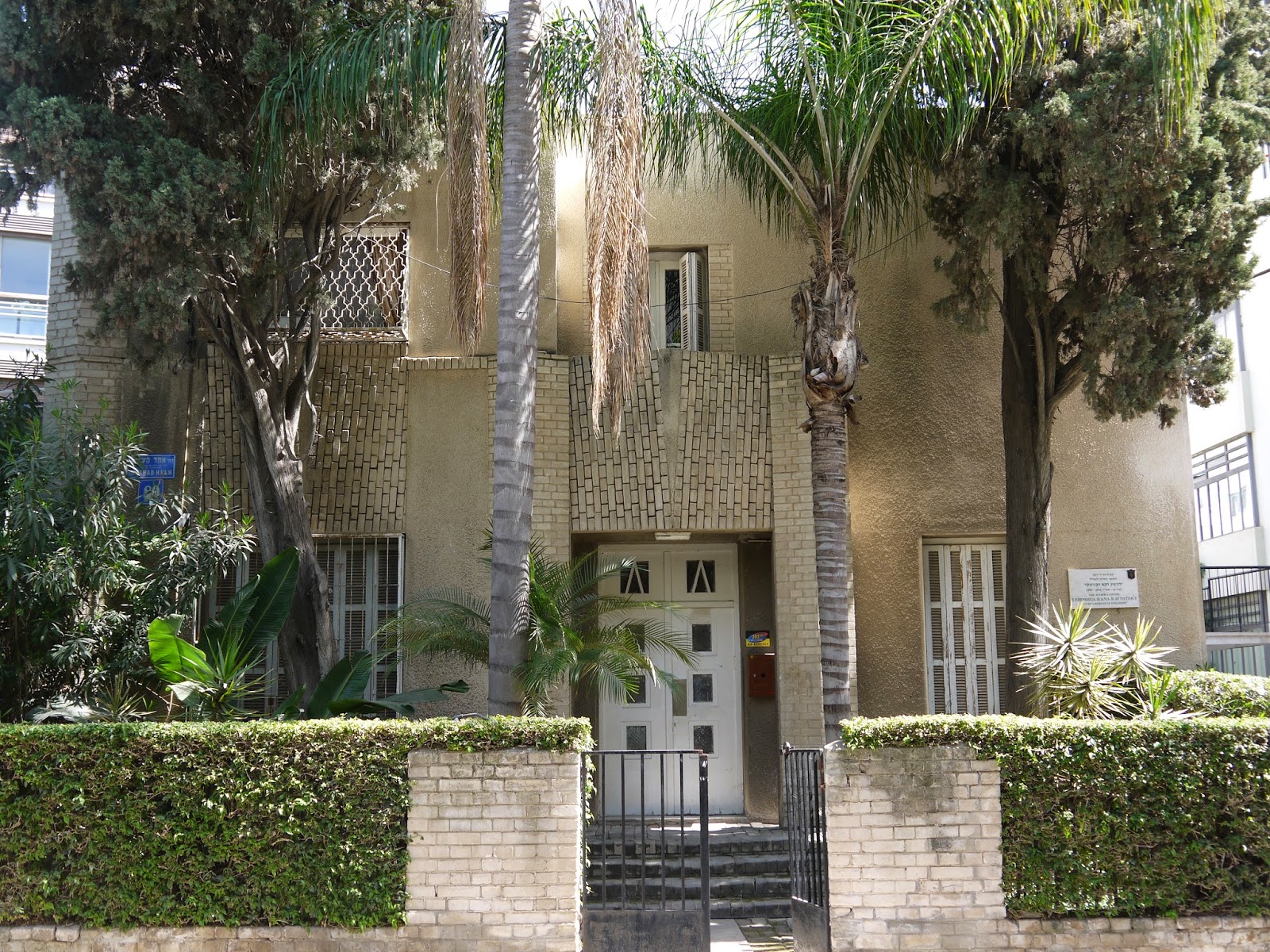 Finally, the Palm House at 8 Nahalat Binyamin Street designed by Yehoshua Zvi Tabachnik and built in 1922 (pictured below).  This very large building is located on one of the city's best known streets which is host to a large craft market, street theatre and other attractions at weekends and is a place where long established businesses rub shoulders with new and edgy cafes and bars. The building itself includes references to art nouveau, art deco and classical styles whilst also carrying several Jewish motifs with Magen Dovids, a menorah and a harp amongst others.  Unlike many other Eclectic buildings, the Palm House is not symmetrical, and the designs of the doors, windows and other features are many and varied. The House was restored a few years ago but it would already benefit from some more work - in particular a new paint job - and it would be wonderful if this could be the one building in Nahalat Binyamin that was not targeted for graffiti. Tabachnik came to Eretz Israel in 1919 on the same boat as the poet Rachael, but stayed only a few years - emigrating to the USA in 1925. Interestingly, in the last few days workers renovating the building at 5 Nahalat Binyamin, another Tabachnik building, have uncovered murals from 1921 which were long covered up and forgotten. Now begins a struggle to preserve them Tel Aviv is known as a modern, edgy, "eclectic" city, it always has been and its wonderful Eclectic
architecture is evidence of that
Posted by Yekkes at 11:11