Orhan Pamuk - The Museum of Innocence I must be developing a liking for big books. Having recently read Vasily Grossman's Life and Fate, I have just completed Orhan Pamuk's marathon novel The Museum of Innocence. I have read other works by Mr. Pamuk. I enjoyed very much, but struggled a little with Black Book. I was spellbound by Snow set in Kars. I also enjoyed his memoir dedicated to his beloved home city of Istanbul. For me Pamuk almost "is" Istanbul and together with the black and white photographs of Ara Guler, his writing makes me feel I know the city very well - which of course, I don't only having visited twice!

So what about the Museum of Innocence? Set in 1970's and 1980's Istanbul, it is, on the face of it, a love story albeit an unusual one about the young, affluent Kemal and his relationship with Fusun who he describes as a "distant cousin". The political unrest of 1970's and 1980's Turkey acts as a backdrop, with growing violence between leftists and rightists, assassinations in the street, cafes being bombed or attacked by gunmen culminating in a military coup d'etat, supposedly to restore order. However, none of this really impacts on the main characters, other than the limitations and risks of the curfews imposed at different stages of the story.

The story is told in the first person, by Kemal who charts the development of his love for Fusun over a ten year period. His obsession with her is all consuming, to the extent that he amasses a massive collection of items that she has owned, touched or been fond of - sometimes without her knowledge other times almost brazenly taking things from under her nose. Kemal and his well off, middle class friends spend their time visiting fashionable restaurants and cafes, going to parties, spending summers in their yalis, whilst Turkish society collapses around them. However, although Kemal is privileged and can buy his way in and out of almost everything, things are not so simple when it comes to Fusun - but saying much more will give the story away...so you need to read it!

There are some interesting themes running through the book. We see a society struggling with itself, torn between a desire for modernity, defined as westernness, whilst also clinging on to traditional views and attitudes. Much of this is played out around the sexual behaviour of women. We see most of the male characters either having affairs with very young girls and at the same time, although pleading modernity, rejecting the same women as marriage partners, demanding virginity from their wives.

Linked to this is a theme about authenticity. This begins when Kemal buys what he thinks is a designer handbag for his fiancee Sybil (as I said, you need to read the book - its complicated!) from a small boutique, where he is served by Fusun - seeing her for the first time since they were children. The bag turns out to be a fake and although crippled with embarrassment, he returns it. The theme continues with constant reference to a locally produced fruit drink - Meltem of which the Turks are proud, but few cafes, restaurant or shops stock it, preferring to sell coca-cola and other "western drinks". When asked why its not available, one waiter explains its almost impossible to get regular deliveries, hinting that the Turkish company cannot organise its own distribution and is therefore unreliable.

Kemal ponders at length on the mediocrity of the Turkish film industry of the time. His descriptions of the leading lights are far from flattering with sleazy, drunken, predatory men pursuing Fusun who has an ambition to be a film star herself, and leading ladies understanding that to progress to "fame" they may need to relax their morals a little. The story has a journalist (for which read gossip columnist) called White Carnation who delights in exposing secrets, damaging careers and causing scandals - very topical in the UK these days. There is widespread collusion with White Carnation and similar characters in the book, with even Kemal's highly respectable mother feeding him stories about her own family to secure attention - which she just may crave as a result of her own husband's long time affair with another woman. It is hard not to think that the fake bag Kemal purchased from Fusun is a metaphor for the society Pamuk writes about and just possibly for the relationship between the two leading characters.

The book is not all darkness. There are some very funny descriptions of film making and the use of cheap extras for crowd scenes. I was especially taken with the story about extras in a restaurant scene, getting up and walking away once they had finished eating the kebabs given to them to make the scene more authentic. Others would become rowdy and disruptive, causing more trouble than they were perhaps worth. Several of the film related scenes occur in "garden cinemas" once popular in Turkey but all gone now - open air cinemas with food and drink being served but with occasional audience participation from people hanging from the windows of nearby houses.

The descriptions of the streets and alleys of Istanbul are, as always in Pamuk's writing, exquisite. I can feel the cold of the winter, the heat of the summer, smell the food being served in the restaurants and hear the old time songs being sung in the night clubs of this book. Very few writers have this impact on me. At 728 pages long it is a big read, but it wasn't overwhelming, Maureen Freely's translation is extremely readable and the stories running in the book held me throughout. There is also a useful index of characters in case you forget someone.

Oh, and there really is a Museum of Innocence in Istanbul which displays many of the ordinary and everyday objects referred to in the book. The book even contains a ticket giving one free entrance to the reader should they be able to visit. Orhan Pamuk established the museum earlier this year. The picture below shows him welcoming guest at the opening. 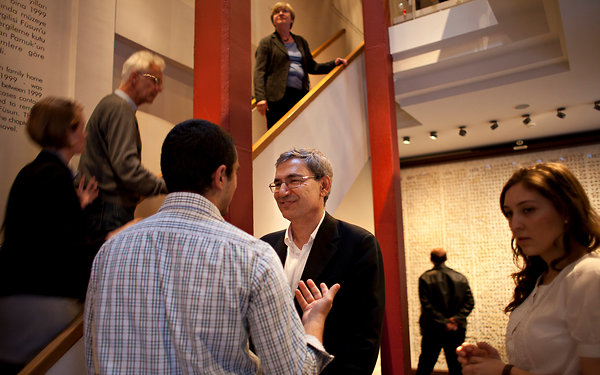