Mumbai's Chor Bazar is a much loved part of the city, well known for its antiques, vintage items and memorabilia. It is currently undergoing "re-development" with most of the commercial and residential units being demolished and replaced by modern buildings. There are mixed feelings about this with concerns about losing the character of the Bazar coupled with the positivity of being rehoused in better quality homes. I was there recently and spent some time in the Camera House in Mutton Lane, one of the Bazar's main streets. I'd read about there being piles of discarded photographs there, many of them from Parsi families and was curious to come and see them. The shop is tiny and so full of old cameras, photographic equipment and piled up photographs that the owner and his assistant stood outside so that I could enter and browse. 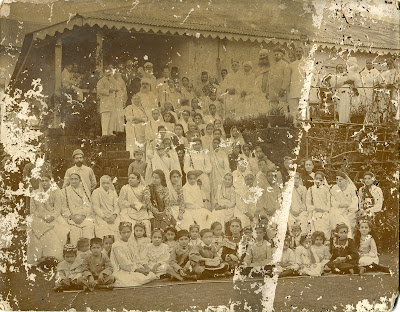 I spent some time browsing through discarded family albums and loose individual photographs, many in poor condition and most of them clearly once the property of Parsi families. I wondered how the pictures came to be there, arranged haphazardly with few clues to help in identifying these faces from the past. It is unlikely that any of the people in these pictures is still alive but surely there are surviving friends and relatives somewhere? I worried that the next and final home for these pictures might be the dustbin, especially given the changes in the Bazar and so decided to purchase a few that particularly interested me. That evening I met a friend for coffee. I took the pictures with me. We spread them out on our table and spent some time talking about them. My friend shared my fascination as did the two young women at the next table, one of whom having seen them asked me where I'd got them from, did I know who the people were and what was I going to do with the photographs. At the time she asked I could only answer the first of her questions.

The photographs provide few clues about the people in them or where and when they were taken. Some are set in cardboard frames, a couple of which bear the names of photographic studios. Online searches for these companies have provided fruitless and it seems that B. Adey and Co. who had branches at More Gate in Delhi and in the then Bombay, and Eduljee Sorabjee of Park Lane, Secunderbad are no more. Portraits of two men have the name A. N. Kapoor written on them, one bearing a signature, and the year 1939. The other is addressed to Mister Kapoor with a message of best wishes. Who were these men? What was their connection? As with all of the men in the photographs I purchased they are dressed in formal, western style jackets perhaps indicating a professional career and middle class status. All of them are dapper and one sports a jaunty dickie-bow. 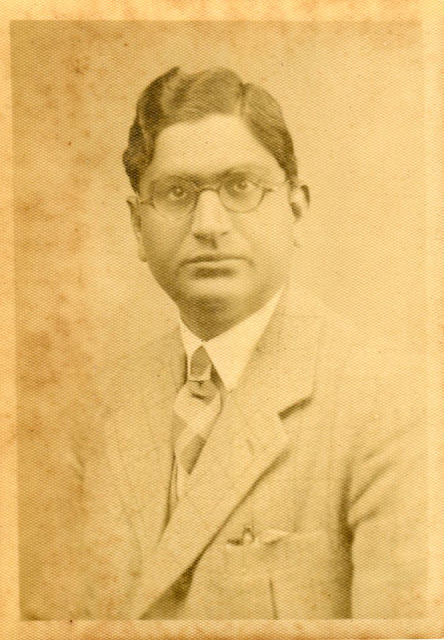 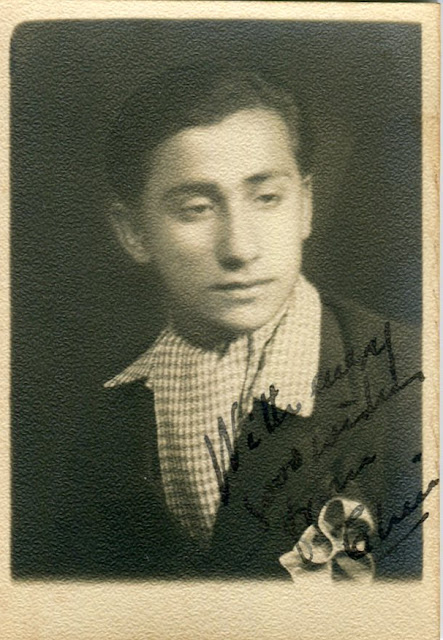 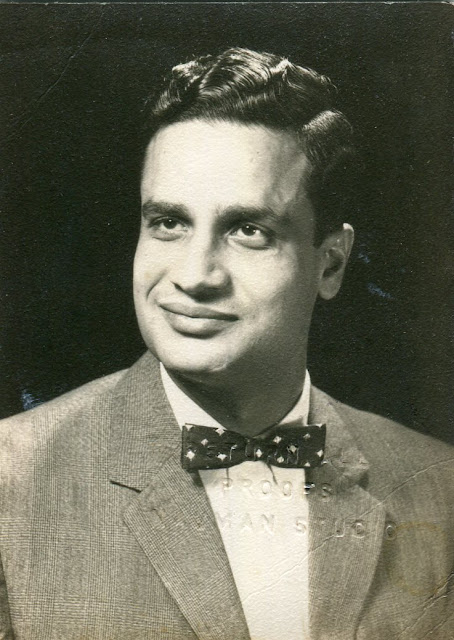 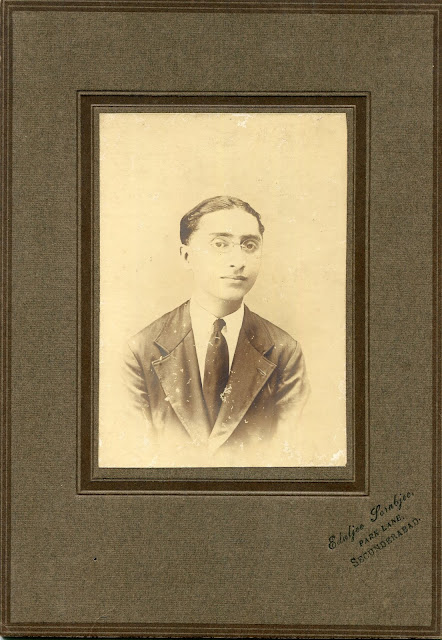 "Parsi" is a Persian word meaning "Persian" It identifies the origins of this community that fled Persia (modern day Iran) during the seventh century in order to avoid persecution. They are one of two groups in India that follow the Zoroastrian religion. The other  group, the Iranis came during the late nineteenth and early twentieth centuries, again as religious refugees. Over the years the community has made significant contributions to Indian society especially in the fields of science, industry, sport and the arts. The community in India has produced many famous people including rock star Freddie Mercury, actress Nina Wadia, conductor Zubin Mehta, cricketer Farokh Engineer, and India's first female photojournalist Homai Vyarawalla. Award winning author Rohinton Mistry has written a series of books featuring characters from his now Mumbai Parsi community. Several community members have served with distinction in the military.

The community has particularly made its mark in Mumbai where they funded many public buildings and where they established a particular style of cafe, several of which survive until today including Cafe Leopold, Jimmy Boy, the iconic Britannia cafe and the wonderful Parsi Dairy Farm where I like to stock up on peda and other Indian sweets, drinking a glass of lassi whilst my purchases are packed.
The community is now is rapid numerical decline due to a declining birthrate and large scale emigration. In turn this has produced an ageing population with more than 30% of the community being aged over 60 and less than 5% below 6. The 2011 census showed just 57,000 Parsis living in India a figure expected to reduce to a mere 23,000 by next year. Sadly, it seems that the once lively bhags, housing blocks in Mumbai's Colaba and Byculla neighbourhoods, catering only for this community will one day stand empty. 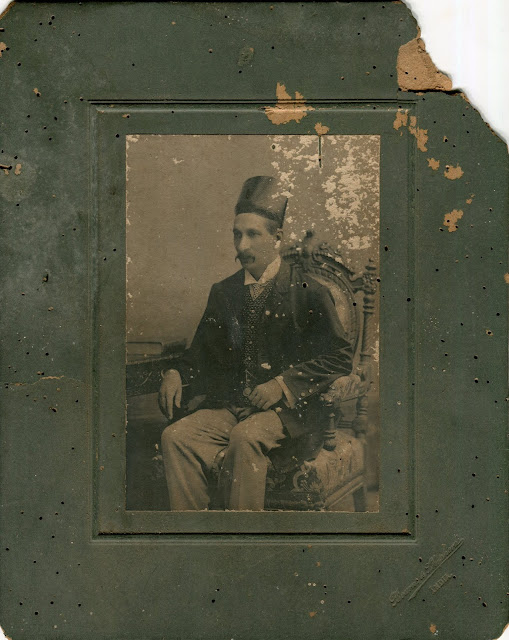 Other pictures are of important lifetime occasions, not all of them of Parsis. One seems to be of a young Catholic boy holding a huge candle and standing beside a picture of Christ surrounded by children. Perhaps he is about to take his first Holy Communion. I have only half of the picture bearing the Adey studio logo. It shows a mother holding a young baby. What happened to the other half of the picture? Was it deliberately torn in two by one of it's subjects or has it been broken during its time in the Camera House? I searched the pile of pictures for the missing piece but couldn't find it. There is also a formal picture of a young couple, the woman holding a book as she looks directly at the camera. Perhaps most interesting of all is the badly damaged group photograph at the top of this post featuring a large gathering in a formal setting.

The question the young woman asked me in the cafe was a very good one and one I've been considering since leaving the Camera House. As well as writing about them here, I plan to share some of them on social media. Perhaps someone will know who these people are or remember something about the Adey and Co or the Eduljee Sorabjee studios. All information is welcome. 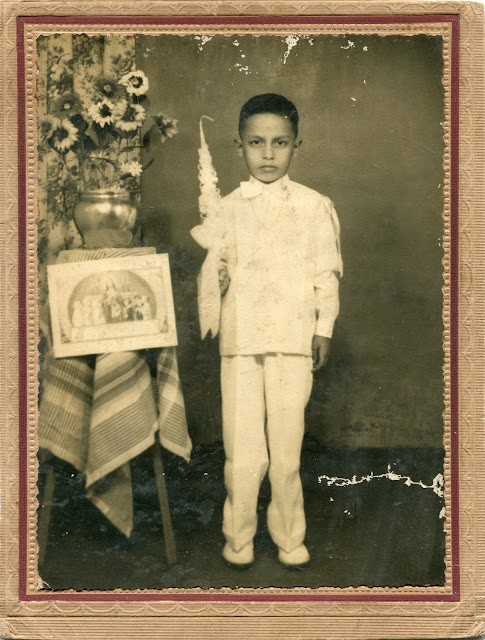 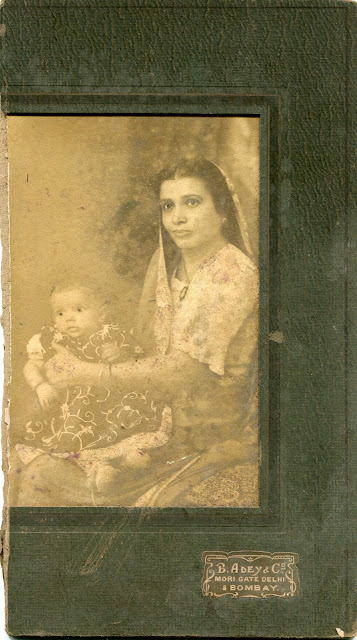 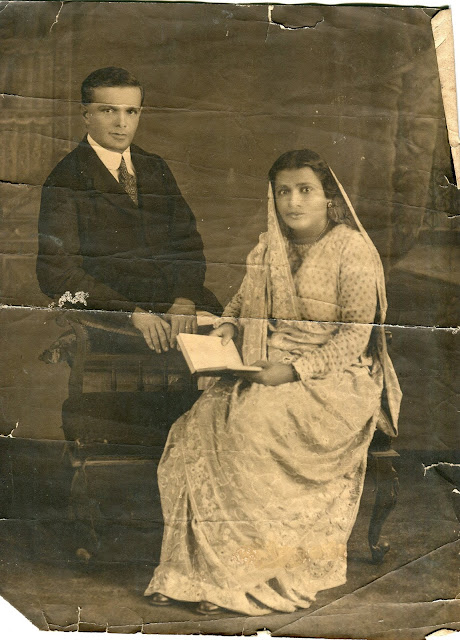