The Lanes of Varanasi

Varanasi, also known as Benares sits on the banks of the River Ganges and is the holiest city in Hinduism and Jainism. It also played an important part in the development of Buddhism, the Buddha having given his first sermon at nearby Sarnath in 528 BCE. Archaeological evidence has been discovered dating back to 1800 BCE making Varanasi one of the longest continuously inhabited cities in the world.

The subject of many travel shows, it is known for its Hindu cremations on the ghats (steps) leading to the Ganges. It is a place of pilgrimage and a somewhere devout Hindus may go to die as played out in the recent film Salvation Hotel. But Varanasi is also a place full of life. Its narrow lanes and bustling bazaars are packed with shoppers, sellers, sadhus and pilgrims all competing for space with cows, goats and dogs. Above the lanes monkeys travel from roof to roof, sometimes descending to steal food from the market stalls. Travellers are often advised to "look up" so as not to miss delights above street level. The same is true here but it is also advisable to look down and step carefully due to the number of animals in the street. 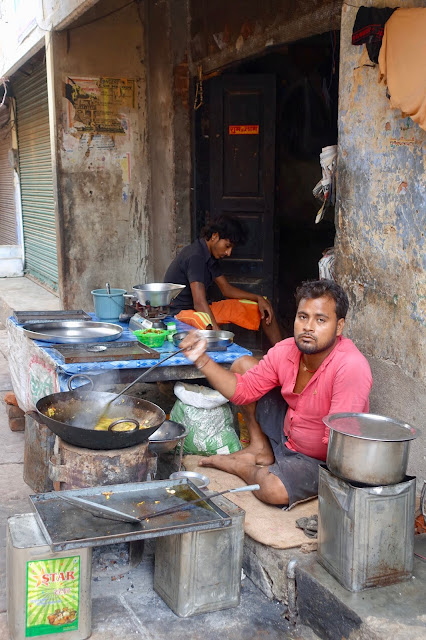 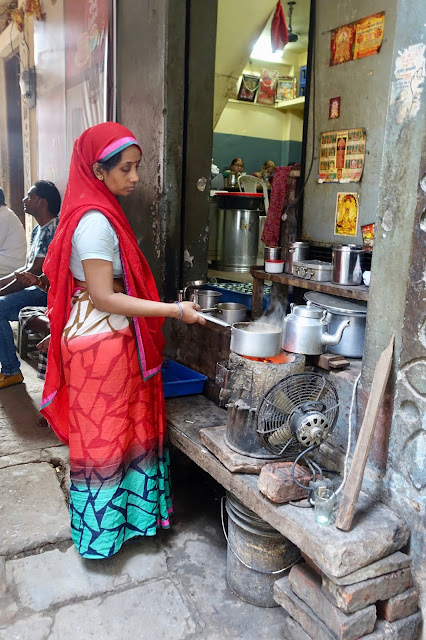 During the few days I recently spent in the city most of the ghats were under water due to a particularly heavy monsoon. I spent most of my time doing what I enjoy most, wandering the streets, meeting people and attempting to capture the experience with my camera. I stayed in a hotel on the river side, stepping through the door straight into the lanes. Early morning is an interesting time to be out and an opportunity to see the city coming to life. At this time the lanes are full of pilgrims on their way to the Ganges for early morning pujas (prayer rituals), shop keepers opening up and small cafes preparing and selling breakfast to locals and visitors alike. Savouries, chai and other treats are on sale everywhere whilst fruit and vegetable vendors are already on the street, displaying their goods to passer-by. Turning a corner I noticed a woman crouched on the ground selling huge coconuts and a selection of green vegetables. She was accompanied by her son Jyoti, aged 8. I was struck by the contrast between her vibrant green sari and the terracotta coloured wall against which they had set up shop. But more touching was Jyoti's affectionate attitude to his mum as he placed a protective hand on her shoulder. 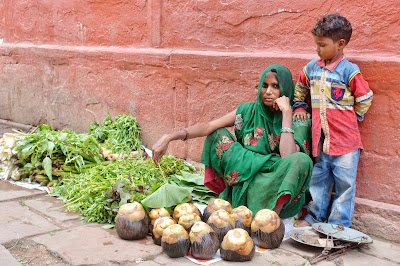 Although most of the ghats were flooded I was able to visit one that stands at a higher level. Groups of people and lone devotees were descending into the water whilst others sat on the steps, participating in prayers led by priests and sadhus. Others were purchasing ground haldi (turmeric) from women vendors which would then be used for ritual purposes and in some cases. Still others were being shaved by one of the many barbers who work on the ghats. The pilgrims included a group of men from south India. I observed one of them for some time. Of striking appearance, he alternated between prayers, making calls on his mobile and taking selfies. I couldn't resist taking his picture. 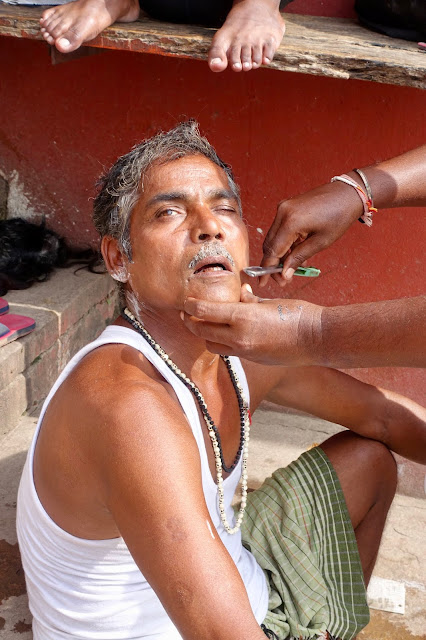 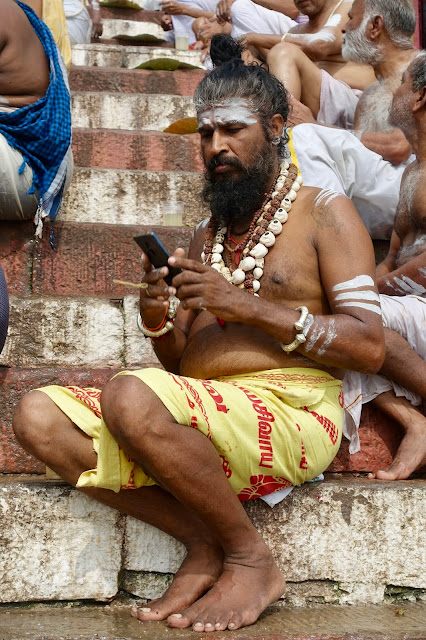 Varanasi receives visits from millions of pilgrims every year. There are hundreds of small hostels that specialise in receiving them, many of them charging very small amounts for a place to sleep and a little food each day. For the poorest of visitors a range of charitable organisations or private individuals provide simple free accommodation. Some of the pilgrims collect alms in the street either for distribution to charitable institutions or to sustain themselves whilst in the city and on the journey home. I came across a man sitting against a wall in a dark, covered alley leading to one of the ghats holding out a silver tin for passers-by to donate. The sunlight from the street pierced the darkness around him, lighting up the wall's crumbling yellow plaster and his brilliant ochre head covering.

Still in the lanes, I was approached by an elderly woman who invited me to take her picture. She explained that she was a pilgrim and that she was extremely happy to be in Varanasi. After standing for a photograph, she smiled and asked me for some money. I was happy to hand over a small amount of rupees and she was happy to receive them, checking that I was not angry with her before she moved on. I like her style. India is one of only two Hindu majority countries in the world, the other being Nepal. It is not surprising then that there are many Nepalese visitors in Varanasi, predominantly in groups and immediately identifiable by the small caps worn by most of the men. 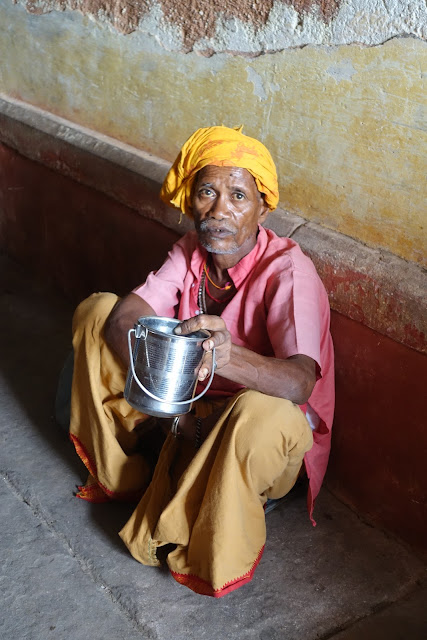 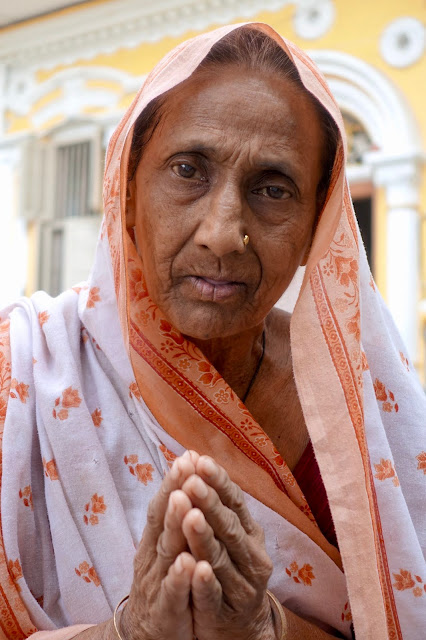 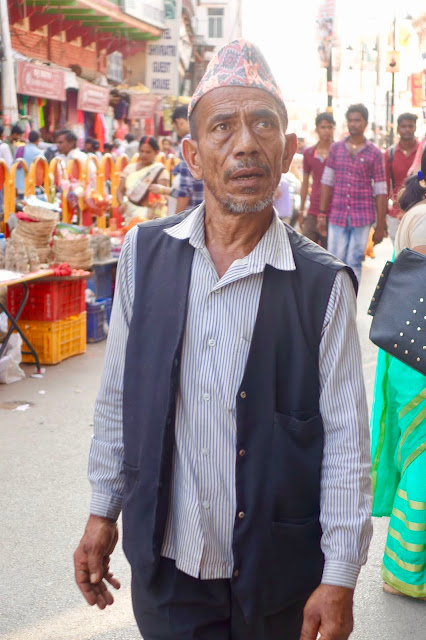 Business of all kinds is conducted in Varanasi's narrow lanes. Spices, fruit, vegetables, religious items and clothing are available here as well as kitsch tourist souvenirs. Countless stalls offer chai (several cups of which I managed to consume each day) whilst others sell paan. Paan is a preparation that combines the betel leaf with the areca nut which is then chewed for its stimulant effects before being spat out or swallowed. When spat out it leaves deep red, stains wherever it lands. There are numerous variations of paan some of which add tobacco. Some vendors claim positive health effects for paan.  A character in Rohinto Mistry's novel Such A Long Journey sells paan that can address any or all of your problems. However the World Health organisation advises that consumption, with or without tobacco, increases the risk of oral cancer. Despite this its use is widespread in much of Asia and it is easy to purchase.

Varanasi is known for its many sadhus, Hindu men (and occasionally women) who live a life of asceticism having renounced worldly things. They are easily identified with their simple clothing which often includes saffron coloured robes and spiritual markings on their face and body. Committed to a life of spiritual discipline, meditation and self-denial some of them will give blessings and carry out rituals or other religious services for a fee. The sadhus pictured below were collecting alms and sitting on a platform on which various boarding houses were advertised. As if to demonstrate the visual delights of the city, they sat just a few steps away from a paan seller and a group of women enjoying a cooling yoghurt drink after a hard morning in the bazaar. 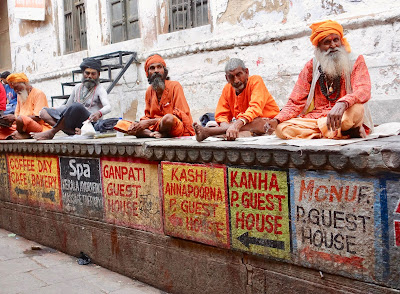 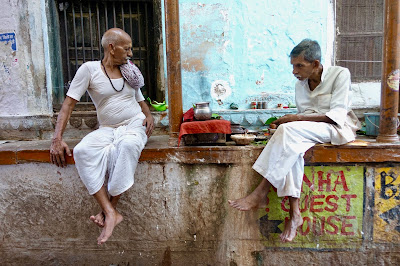 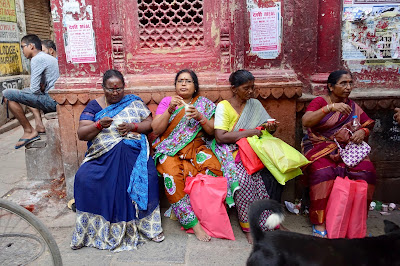 In Kolkata I made an early morning visit to an akhadi, a traditional exercise centre, to see kushti wrestlers practising their skills, lifting weights and performing gymnastics. It was a dark morning and the pictures I came away with were a little disappointing due to my poor low light photography skills. All was not lost as I had scheduled a similar visit in Varanasi.

The Tulsi Akhada is located beside the Tulsi Ghat on the banks of the Ganges. I arrived at around 6.30 a.m. to find some of its members already exercising or preparing to take part in kushti. Over the course of an hour, perhaps 20 men of varying age arrived to make use of both traditional and modern strength building equipment and to participate in wrestling. There is evidence that these facilities are dying out as younger men in particular prefer to exercise in a modern gymnasium which is sad given their long tradition. These traditions include a strong spiritual dimension. The Tulsi Akhadi has a tiny Hanuman shrine and every morning a ritual is undertaken before the kushti begins. Wrestling is an important and popular sport in India and one in which the country has won several medals internationally. Many champions have been discovered through the akhadi system and its supporters hope that renewed interest in the sport will help ensure its preservation. 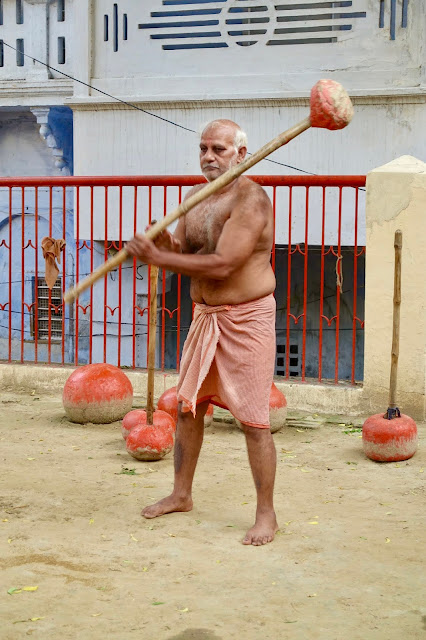 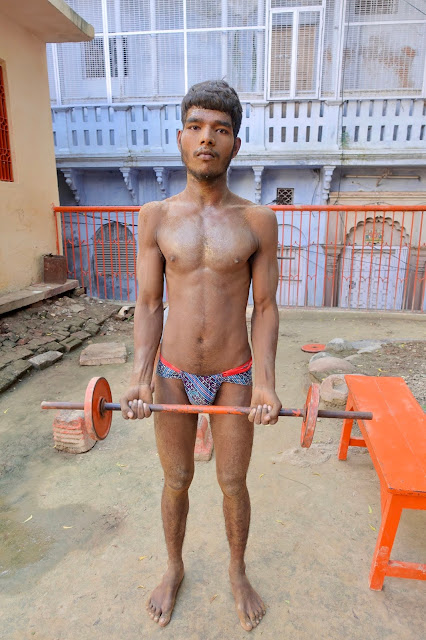 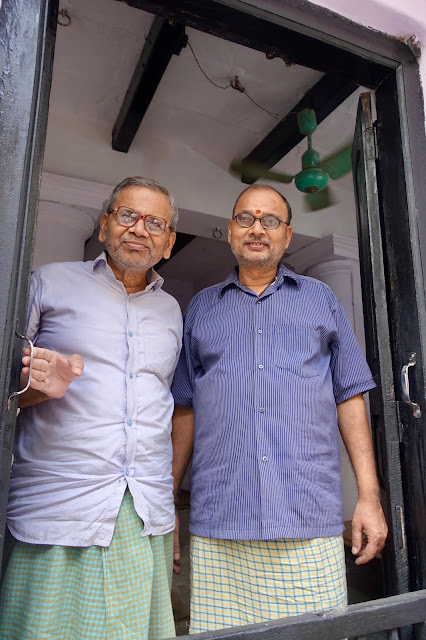 Back on the lanes, the Trivedi brothers saw me before I saw them. They waved to me from the open window of their animal foodstuffs shop and invited me in to sit with them for a while. Their family has been running this business for three generations but has lived in the city for much longer. They were very proud to tell me that one of their brothers is a doctor and that another works in government. They also wanted to know about me and my life in London. When I rose to leave, a cow was standing at the door refusing to budge and making it impossible for me to exit. One of the brothers saved the day by climbing over it and enticing it away with a bowl of animal feed before joining the other brother at the window to wave goodbye. It is always nice when hosts don't want you to leave but this was something new for me.

There are delights and surprises hidden around every corner here. In close proximity to a shop-house with hand painted figures on the exterior, a goat passed nonchalantly underneath someone's washing line. And a few minutes further on I turned into a narrow alley where I came across a beautiful haveli. The external walls were decorated with paintings of dancers, aristocrats being carried by elephants, and other figures whilst a stunning arched entrance was surrounded with floral motifs. This building would not have looked out of place amongst the beautiful havelis of Churu, Rajasthan. 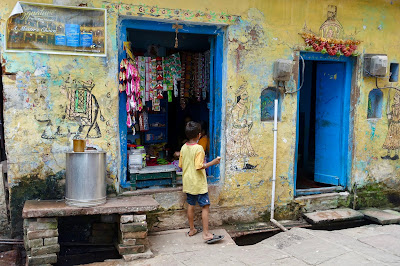 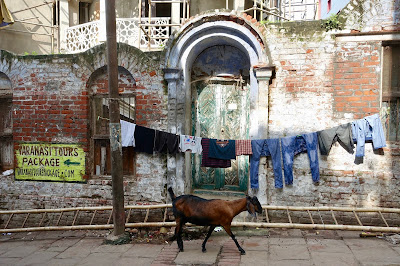 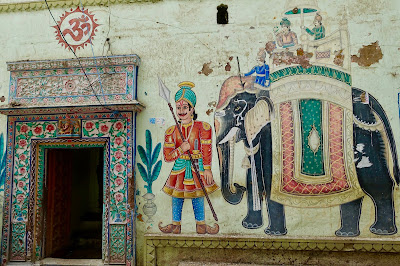 Beautiful doorways are commonplace in Varanasi. Many of them have small representations of Ganesha, Hanuman and other Hindu deities above the entrance, protecting the home and those who live there. Others are decorated with hand painted designs indicating a recent wedding. One of my favourites has a brightly coloured sunburst motif, floral designs on the pillars flanking the doorway and striped vases on the lintels. Delightful. 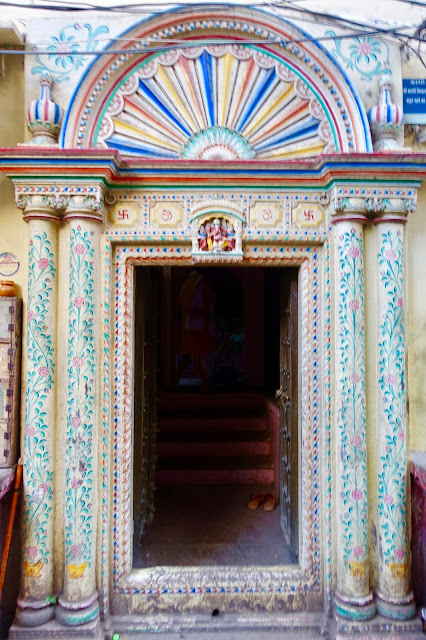 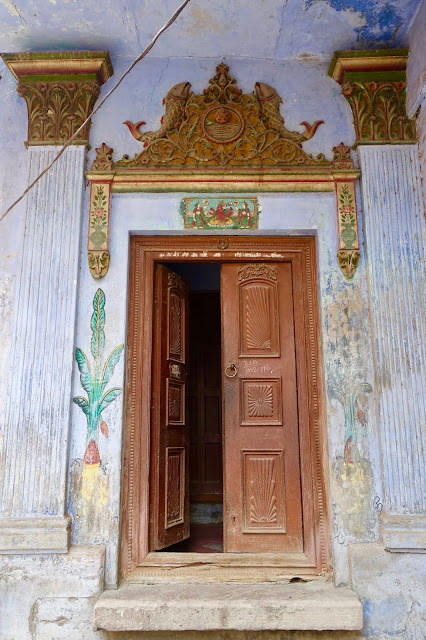 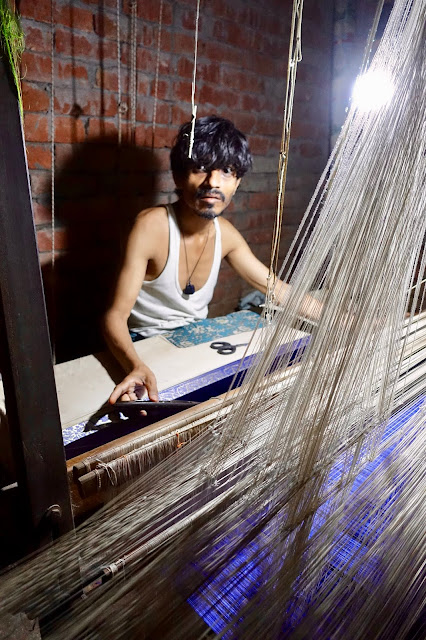 During my recent visit to India I was fortunate to be able to meet many ordinary, working people and to hear a little about their lives. In Varanasi I met a 38 year-old weaver called Mohammed. It was well into the evening when I met him, still working at his loom where he had sat since early that morning. He looked younger than his stated age but was very thin and told me that it was difficult to manage with two children aged below three years to feed and clothe and eventually to send to school. He makes beautiful saris on a hand operated loom, hard physical work for which he receives just 200 rupees per day. The person who owns the business will employ many weavers. The saris are much prized and sell for 15,000 rupees or more. I met Mohammed on my final evening in Varanasi, a sober end to my time there. 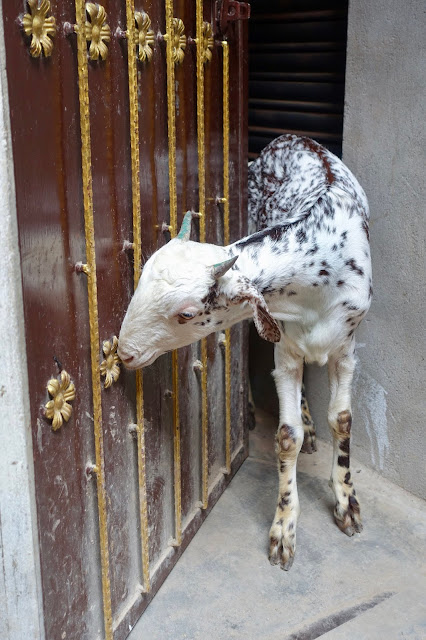 You can see more pictures from India here.
Posted by Yekkes at 14:35