I Have Food, Water and Clean Clothes What Else Do I Need - Muna of Delhi

To be Hijra is to be neither male nor female but to possess elements of both. In India Hijras are recognised in law as a third gender and may adopt what is widely held to be female dress and behaviour. They have traditionally earned a living by collecting alms and by giving blessings and performances at weddings, births and festivals. Drawn from all religious groups, their devotion to Bahuchara Mata, a mother goddess comes before observation of any other faith they might follow. India's Hijra community has a recorded history of over 4,000 years.They are mentioned in ancient literature including the Ramayana and other important texts.  During the Mughal period some of them held high positions in the court and would be called upon for advice on religious matters or to give blessings during important ceremonies. 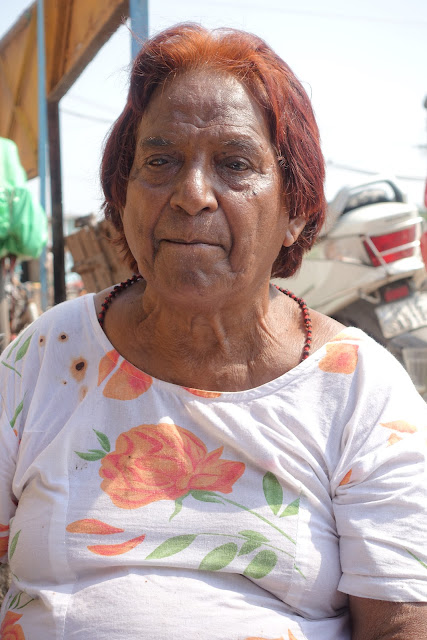 Muna is 70 years old and Hijra. She was born into a respectable Syed Muslim family, close to the Jama Mosque in Delhi.  Feeling different from an early age, she chose to leave the family and to live separately. Last week, together with my guide/ interpreter I had the privilege of spending an hour with her and hearing her story. For the first few minutes she was a little cold, sitting on the floor outside her home, rinsing out clothes and looking away from us as she spoke. As time went on she became more comfortable, spoke more freely and looked us in the eye.

Muna is a guru and highly respected in the Hijra community. In the past she had students who would accompany her about the city, learn from her and eventually become gurus themselves, operating in different parts of Delhi. The former students still visit from time to time but do not provide any material support. She seems a solitary figure and when asked about family says that she has only superficial contact with them but wants nothing more. Due to her age she is eligible to receive a small amount of financial support from the government but has yet to do so. Despite this she describes herself as rich "I have water, food and clean clothes. What else do I need?".


This simple yet wise approach to life was displayed when during the course of the discussion we sent a small boy to bring tea from the chaiwallah. My guide asked him to bring 4 teas, one for each of us and another for the rickshaw wallah who had brought us to the meeting. Muna objected saying that we only needed 2 teas and 4 cups. She maintained that 4 teas is extravagant and chided us that we would not be able to look after our families if we "waste money on tea".

Muna is critical of what she describes as "fake Hijeras" involved in drugs, prostitution or crime. She says that they fear her when she walks in the red light areas and come to touch her feet and to give her respect and because of this she does not make trouble for them. Many of them come to her for blessings at festival times and on other important occasions. Respect is something that Muna talks about a lot. Although born a Muslim she respects all religions, is happy to give blessings to people of all faiths and will eat the food of any religious group if called upon to attend a wedding or some other ceremony. The only exception she makes is that she will not eat at the home of a family that consumes pork. Religion remains important to Muna but her devotion to Bahuchara Mata is of the greatest importance.


Towards the end of our time together she explained the reason for her initial disinterest. She is suspicious of outsiders many of whom come to her in order to make money and write or say disrespectful things about her. Some have promised help to complete an application in order to receive señor citizen's allowance but that help has not materialised.

As we stood to leave, Muna got up to give us a blessing, placing water on our foreheads and asking that we be safe and protected. I am not someone who could be described as spiritual but I felt a certain calmness from her, despite, or perhaps because of her direct way of speaking. Although there has been legislation to recognise the Hijras, abuse and discrimination is still widespread. It easy to change the law but not so easy to change attitudes and beliefs. I understood her preoccupation with respect.

Several writers say that the word "Hijra" has an Arabic source and means leave or migrate and interpret the word as being one who has left their tribe. Although Muna left her family and community many years ago she still lives close to the Jama mosque, part of a different tribe but not so very far from her previous one. I hope to meet her again.
Posted by Yekkes at 17:39