Hightrees House on Nightingale Lane overlooks Clapham Common and is a short step from Clapham South tube station on the Northern Line. Commissioned by the Central London Property Trust Ltd, construction was completed in 1938. The architect responsible was RWH Jones who is best known for designing the iconic Saltdean Lido just outside Brighton as well as a number of hotels. 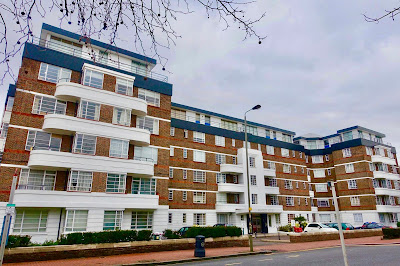 The building has 110 units, most of them three bedroom flats but there are also some with four bedrooms and a few bedsits, all arranged off central corridors. Many apartment blocks constructed during the 1930's offered a range of ultra-modern conveniences in order to attract residents and Hightrees House was no exception. The basement included a restaurant, bar and swimming pool as well as storage space for the deck chairs set out on the flat roof during good weather. Other modern features included the provision of electric heaters, radios and clocks in the living rooms. The building still has a swimming pool as well as a gym and 24 hour porter service. Sadly the bar and restaurant are no more. The early tenants would also have had easy access to the former Balham Odeon Cinema, another impressive Art Deco building less than ten minutes walk away.

Despite the modern design, the convenient location near to the tube and good local facilities, the outbreak of war just one year after construction was completed meant that it was difficult to attract takers. In response to this, the lessees formed a company, High Trees House Ltd, which negotiated a 50% reduction in rent in 1940. By 1945 the flats had all been taken and the landlords took legal action to both set a new rent and recover monies lost during the War. The landlords were able to raise the rent from 1945 onwards but lost their case for retrospective payments in a landmark judgement given by Lord Denning. 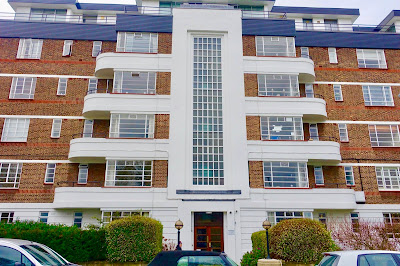 Hightrees House has been very well maintained. The red bricks contrast beautifully with the white concrete curved balconies placed on the facade and ends of the block. The balconies taper as the building rises. There is also a "thermometer" - an impressive glazed stairwell on the front of the building and stylised lighting at the entrance to the grounds. An extra floor has been added in recent years and although it is slightly recessed, it is clearly visible from the street and detracts somewhat from the original design.

Clapham has a number of excellent Art Deco and modernist buildings. Look out for most posts on them - coming soon! 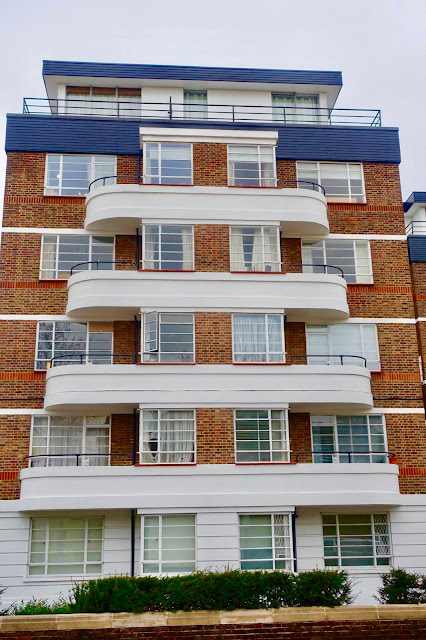 You might also like - Balham's former Odeon, only it's in Clapham! or Streatham Art Deco capital of South London
Posted by Yekkes at 21:37