People watching has to be one of the most interesting activities associated with travel. It offers the opportunity to observe the daily life of locals and the reactions of visitors and can include moments of humour, poignancy and surprise. It's a bit like going to the theatre, only for free. 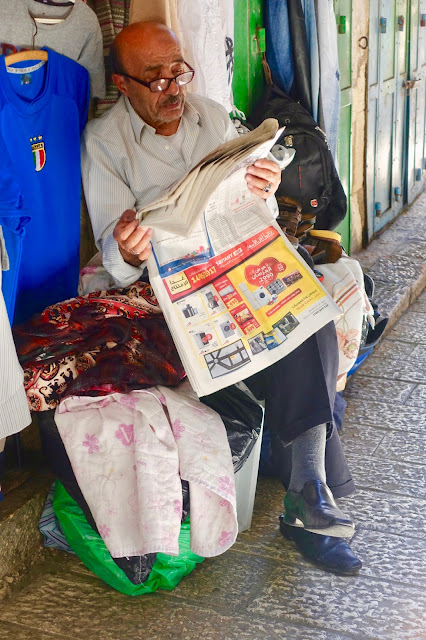 Jerusalem is one of my favourite cities and is possibly one of the most interesting places in the world to people watch. It is home to many communities, important to three major religions and attracts visitors from all over the world, some of whom come for reasons of faith, others to enjoy its world class museum and galleries and yet more come to see what all the fuss is about. On my recent visit I devoted lots of time watching the city's residents and visitors and capturing some of them in the photographs featured in this post.

There are many places to people watch in Jerusalem, some of which I am very familiar with, whilst others, although not unknown to me, are places I had not previously spent much time in. The Church of the Holy Sepulchre in the Old City, falls firmly into the latter category. Of course, I had visited there before but have never lingered and had not realised just how diverse its visitors and "residents" are. During the course of a couple of hours in the church itself and in the front courtyard, I saw a group of nuns from Singapore, Muslim tourists from India, Arab Christians, enormous numbers of Russian Orthodox pilgrims, a group from Moldova, Ethiopian Christians and Israeli Jews.

People come for many reasons - to light candles, to kneel before the spot where Jesus is believed to have been buried, to admire the beauty of the church as a piece of architecture, to hear a tour guide talk about the tensions and squabbles between the different Christian groups that jealousy guard "their" part of the church, to take selfies or just to sit quietly for a time, lost in thought. Those squabbles can occasionally turn violent if one group feels another is trying to take over its area and there have been occasions when the Israeli police force have had to be called whilst the keys to the church are held by a Muslim family in order to avoid unseemly quarrels between the denominations. 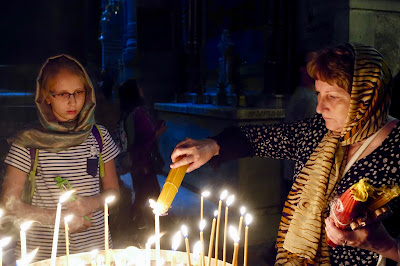 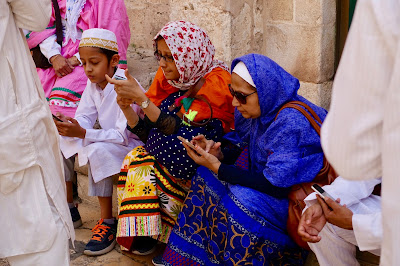 Elsewhere in the Old City the narrow alleys of the shuk teem with merchants, shoppers, tourists and the occasional religious procession. On shabbat (Saturday), the shops and cafes of the Jewish Quarter are closed but the rest of the Old City is packed as locals shop for freshly made bread, spiced ground coffee, meat, fruit, vegetables and other provisions whilst the tourists search for souvenirs. There are also quiet alleys with few shops and it was in one such street that I met Hassan, an elderly shoe repairer. His shop is not much more than a narrow cupboard with shoes and materials piled up from floor to ceiling behind his tiny work space. He told me he had worked in the shop for eighty years but I suspect he meant he was 80 years of age - I do not speak Arabic, he does not speak English and I found his Hebrew hard to understand. One of his neighbours was selling t-shirts, or at least he was waiting to sell them and whilst waiting he sat reading the newspaper. I couldn't resist photographing him. 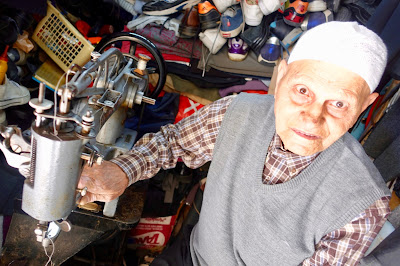 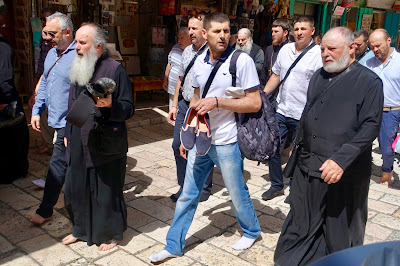 Ben Yehuda Street is a short walk from the Old City and one of the busiest streets in Jerusalem. Lined with cafes and souvenir shops it also attracts musicians of varying styles and ability. This is especially so on Friday mornings where it is not unusual to find superb musicians playing classical music, jazz and more recently, eastern instruments such as the kamancheh player pictured below. 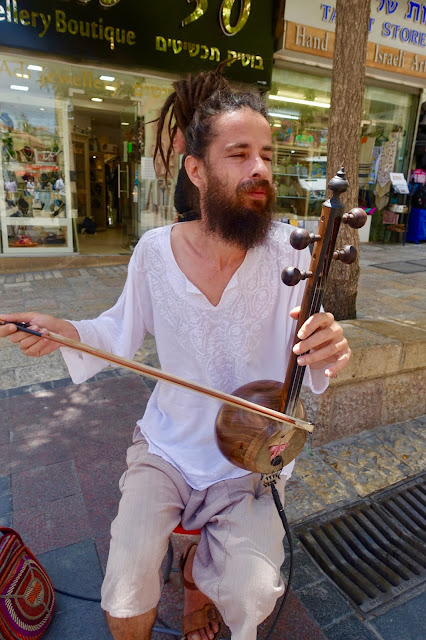 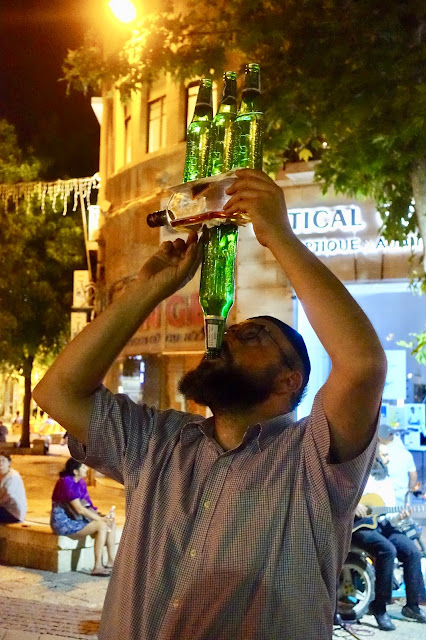 The street runs into Kikar Zion, a square (or more correctly a circle) where there are weekly evening craft markets, where people sit and chat and where musicians come to play and entertain.  Of course, musicians can be seen in all of the world's cities but Jerusalem is a city of surprises and one evening I was surprised to see an Haredi (ultra-Orthodox) Jewish couple entertaining a large crowd - him on the drums and singing, her magnificent on electric violin and even singing a little. This was surprising for a number of reasons. First, Haredi women do not generally sing in public and certainly not in a public square (but of course, there are varying degrees of Orthodoxy within the community), but more even more surprising was their eclectic repertoire. Beginning with Israeli folk songs they continued with Queen's "I Want To Break Free", Toto's "Hold The Line" and finished with a rousing rendition of Michael Jackson's "Black or White". Their audience was equally eclectic with a mixture of secular and religious Jews, Arab teenagers and tourists from many countries. And just when I thought I'd seen it all, another Haredi man arrived and performed the famous bottle balancing trick which involved balancing five bottles on his lip before commencing to clap in time to the music and perform a careful jig! This is Jerusalem.


Shuk Machaneh Yehuda is one of Jerusalem's best known tourist attractions but it is also the place where many of the city's residents go to buy their fruit, vegetables, spices, bread, coffee, meat, fish and household items. During the day the shuk (market) is packed wth shoppers whilst in the evening when most of the stalls have closed, it transforms into a busy social area with restaurants, cafes and bars. It's also a great place to watch and photograph people. Some of the stallholders will happily pose for pictures as they are used to the tourists, some of whom visit in specially guided "tasting" tours, but I prefer to try to get candid "street" pictures such as the three below. The first one shows customers considering bread and biscuits at one of the evening stalls - I liked the look of concentration on each of the shoppers' faces. This second shot took me ages to get. It was taken on a Friday morning when crowds of people were waiting to buy from the stall so I had to wait for a gap in the crowd and for the pancake to be in midair before shooting with a burst. It was worth waiting though. I took the third picture because I liked the style of the elderly gentleman with his snazzy purple trousers, contrasting shirt and kippah worn at a jaunty angle. He looked to be about 70 years of age but was still turning heads with his "look". 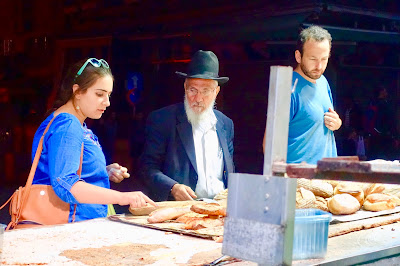 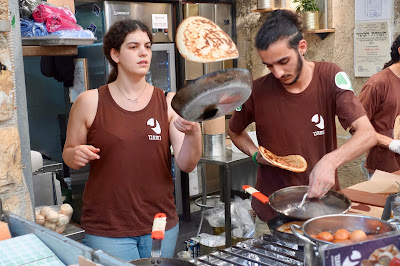 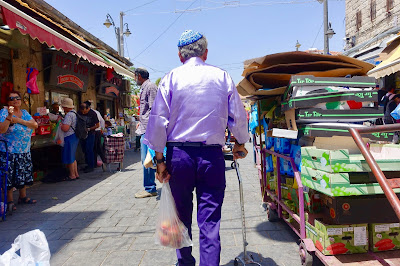 The man in purple made me think about the many different styles of dress that can be seen in Jerusalem. Some of them are dictated by the religion of the wearer and of course there are many variations of dress within each faith. The pictures below show some of the city's many styles as well as a few more favourites of mine from the Church of the Holy Sepulchre - I especially liked the lady in green taking a picture with her pink covered telephone.

First time visitors to Jerusalem who are interested in street photography or regular visitors who want to experience a new side of the city might be interested in taking an Israel Photography Tour either privately or in a small group. The tours include lots of great opportunities for photographing the real Jerusalem as well as the opportunity for technical tips and advice. More details here. 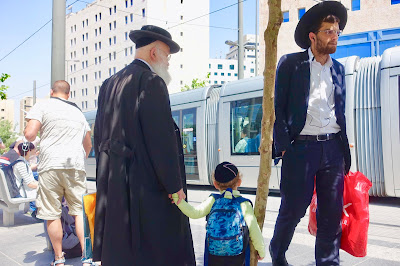 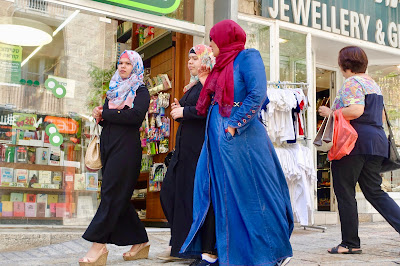 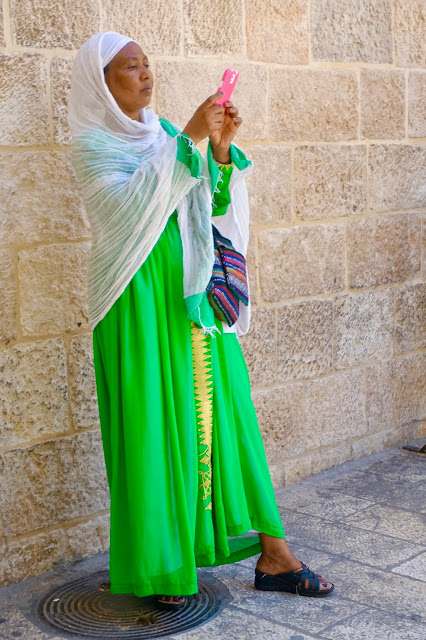 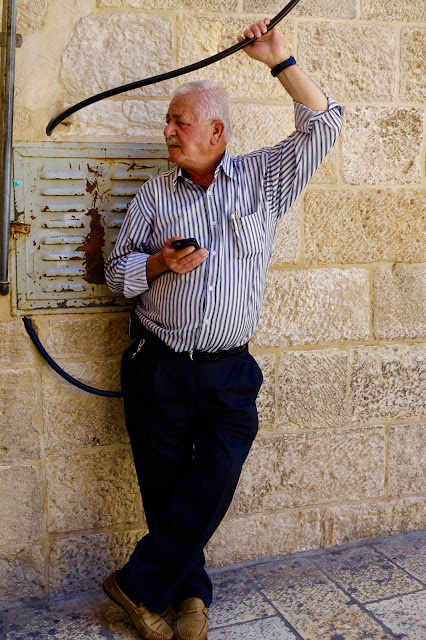 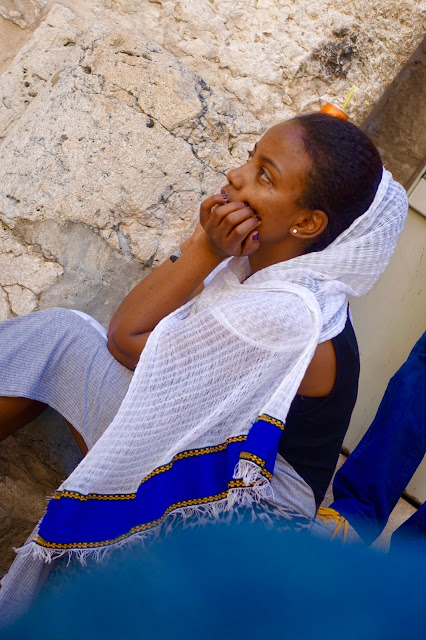 You can see more pictures from Israel here.
Posted by Yekkes at 10:31