Villa Cavrois is a spectacular modernist building tucked away in Croix, not far from Lille in Northern France. Built between 1929 and 1932, it was designed by architect Robert Mallet-Stevens for industrialist Paul Cavrois. The villa was intended as a home for the Cavrois household which included seven children and a number of domestic servants.  The family fortune had been made from two spinning operations and dye-works. Hailing from neighbouring Roubaix, he married his brother's widow and together they had four children to add to her three from the first marriage. 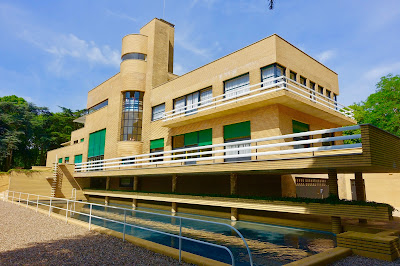 The villa makes a spectacular impact on this green, semi-rural area due to its striking yellow brick structure which is supported by a concrete frame. Mallet-Stevens was also responsible for a number of Parisian villas built between 1926 and 1929 in the street now named for him. Beautiful as his Parisian buildings are, Cavrois is surely his masterpiece.

The architect was not the first choice for the commission. Jacques Greber had been engaged to design the house in 1925 but his proposals were not finalised. Cavrois preferred to employ Mallet-Stevens who began drawing up plans in 1929. Wanting to convince the family of his approach he took the couple to Hilversum in the Netherlands to show them the Willem Dudok designed Town  Hall. Sold on the modernist style, the couple agreed to this approach for their home including the facades being covered with those wonderful yellow bricks. Work was completed in 1932 and the house was inaugurated on July 5th with the marriage of their daughter Genevieve. Despite this being during a period of economic crisis, the wedding was an opulent affair. Flowers were dropped from an airplane in honour of the newlyweds and after nightfall, Andre Salomon the lighting engineer orchestrated a mise en lumiere. 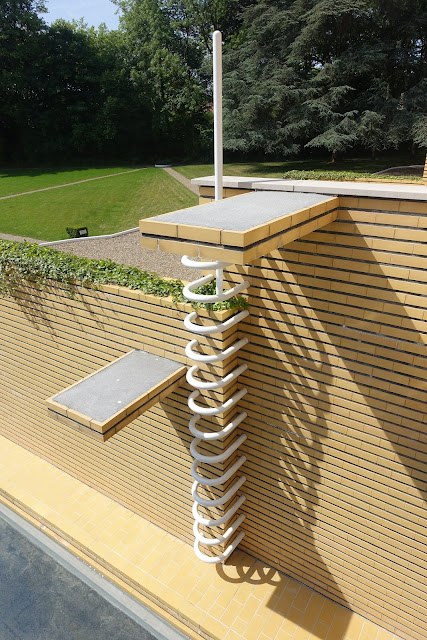 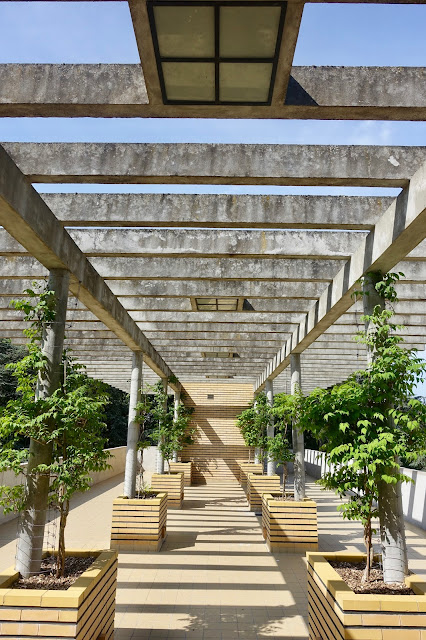 Mallet-Stevens set out his design principles for the villa in his book. Une demure 1934 (A 1934 home). These included making use of the most up to date technology including central heating, ventilation and lifts as well a telephone and a radio in every room. Furthermore the villa was designed with separate areas for receiving guests, for carrying out domestic tasks, for the parents, for the children and for sport and leisure.

The Second World War began just seven years after the house was completed and between 1940 and 1944 it was confiscated by the occupying German army and sustained damage at the War's end. The Mallet-Stevens had died in 1945 and so when the family returned in 1947, Monsieur Cavrois requested another architect, Pierre Barbe to add two apartments for the elder sons.


The family remained in the villa until 1985 before it was sold to a real estate company that wanted to subdivide the park. The new owners ceased maintaining the building which became prey to looters and despite being listed as a national monument was allowed to become dilapidated. Credit for saving the villa must go to the Association de Sauvegarde de la Villa Cavrois, founded in 1990. The organisation ran an intensive media campaign supported by several of the world's leading architects including Tadao Ando and Renzo Piano. Eventually the state stepped in, purchasing the property in 2001 and handing it to the Centre des Monuments National at the end of 2008. 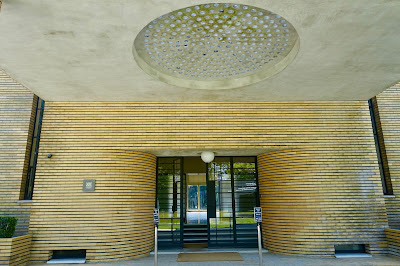 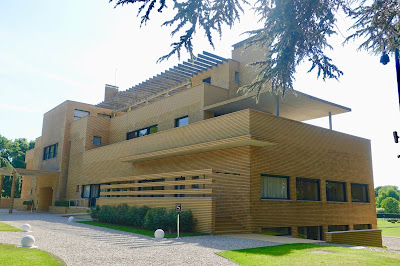 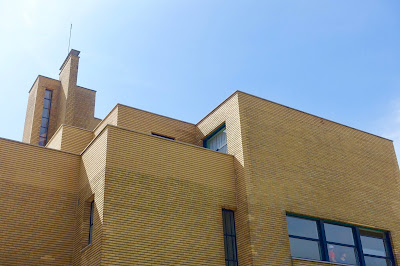 Restoration work began in 2004 and included removing the vegetation growing on the exterior, reinforcing the main structural elements and as far as possible, preserving the original materials. Some of the features added by Barbe as an extension of his 1947 commission were deemed to be detrimental to Mallet-Stevens' work and removed. Replacement bricks had to be manufactured for those beyond repair or missing. The interior was also in very poor condition but the existence of early documents and photographs aided the work of restoration.

The villa is now open to the public. Approaching through the park and the former caretaker's pavilion, the first view of the house and its yellow exterior is quite breathtaking. The varying heights and masses, recesses and glazed surfaces make it difficult to know where to look first. The main doors are flanked by beautiful curved brickwork, reminiscent of the entrance to number 10 Rue Mallet-Stevens in Paris. A canopy supported by rounded brick pillars protects visitors from the elements whilst light filters through from above by means a circular glazed element.

The glazed elements of the facade include both austere, narrow horizontal windows in the "box" shaped sections as well as a "thermometer" at the rear which runs the length of a staircase connecting all floors. The roof terrace includes a long pergola and even here, the yellow bricks are in evidence, being used as tree planters. Other elegant features include the concrete diving boards and white hoop ladder for the pool at the rear of the house - although the pool looks rather shallow for diving today! This feature demonstrates nicely the play of light and shadow on the villa with the hoops reflected on the bricks. 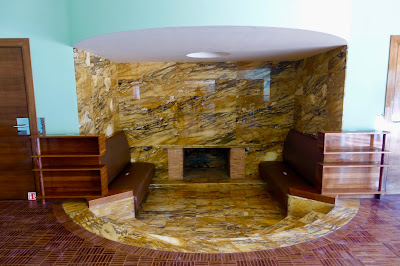 The interior is equally striking. Materials used include opaline glass, white marble for the stairs with black marble for the risers, aluminium wall covers, pear wood and ceramic tiles. The salon-hall is especially impressive, occupying a large space and overlooking the park. The showstopper is the yellow Sienna marble fireplace and built in bench seats. Several of the rooms contain original furnishings all of which were designed by the architect. Much of the furniture had been sold in 1987 but the original inventory made it possible to recover some items which are now on display. They have been placed according to the layout shown in photographs from the 1930's.

Much as I like that fireplace, my favourite internal feature has to be the staircase linking all of the floors at and above ground level. Despite being encased with a curved glass thermometer, the staircase is not of the spiral style, rather a more conventional angled backwards and forwards design that lends itself beautifully to the zig-zag patterns on the risers and under the steps. This is a sharp contrast with the shapes caused by the play of light on the rounded landings, reflecting the window-frames. 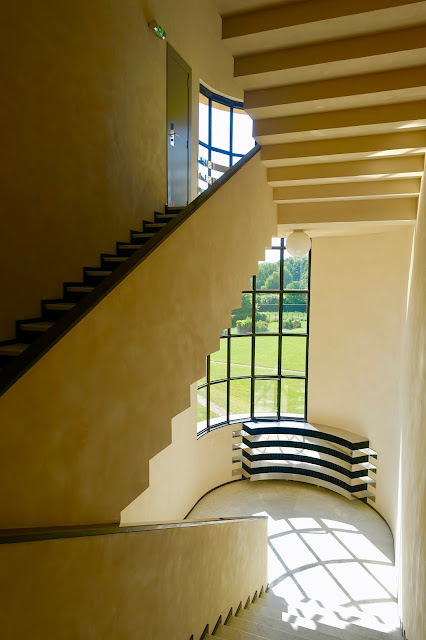 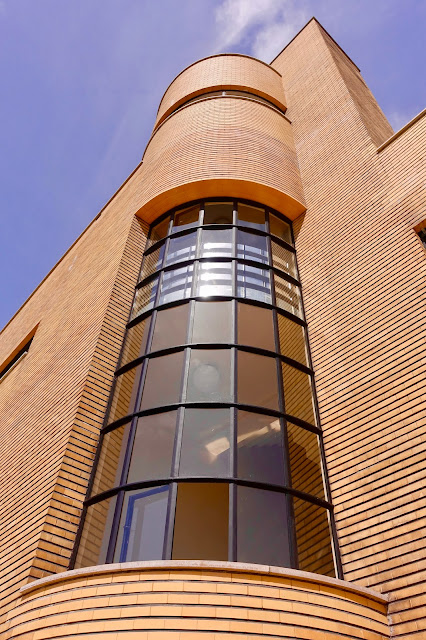 The works were completed in 2015. Since 2012 Villa Cavrois has been part of an international conservation programme designed to protect important 20th century houses - the Iconic Houses programme, furthering assuring the future of Mallet-Stevens' wonderful work.

Details of when the Villa is open for visits can be found here.