I first visited Mexico in 2013. I wanted to see the art of Diego Rivera, Frida Kahlo, Rufino Tamayo  and all of the other great Mexican artists. I wanted to see the pyramids at Teotihuacan and the other sites that preceded the colonial period. And I also wanted to visit some of the wonderful Mexican art deco buildings that I had seen on the Art Deco Mex Facebook page. I was not disappointed, in fact I was inspired to return to see more of this beautiful, colourful, exciting country and recently visited for the third time in four years.

On my two previous visits, I spent a lot of time in the La Condesa neighbourhood, admiring the spectacular collection of art deco buildings in Avenida Amsterdam, Avenida Mexico and the surrounding streets. This time, thanks again to my good friend Eduardo of Art Deco Mex, I was able to see some of the many deco buildings in Colonia Roma, adjacent to La Condesa, as well as discovering more treasures in the Centro Historico and in the cities of Puebla and Oaxaca.

Colonia Roma was established at the beginning of the twentieth century and has a more European feel than other parts of the city due to its Parisian style streets and classicist buildings. During the 1950's the Beat writers including Jack Kerouac and William S Burroughs spent time here and today the area remains a bohemian enclave where many writers and artists live. Colonia Roma also has some wonderful art deco buildings including the stunning Edificio Anahuac at 109 Queretaro. The stand-out external feature is the dramatic entrance with its wavy green tiled external lobby, ornate glazed door and stylised numbering above the entrance.

We were lucky enough to be able to see inside the lobby and one of the flats in the building as one of the residents was standing on one of the street facing balconies when we arrived and Eduardo charmed her into letting us in! The communal area includes a now disused name board to show who lived in each apartment, a brightly coloured staircase with hints of California style and a small lodge once used by a concierge. The apartment was very small and had lost most of its original features but it was possible to imagine how stylish the building once was and the current resident was enthusiastic about art deco and the building's history. Edificio Anahuac was constructed in 1932 to the designs of Francisco J. Serrano, a prolific architect with several other buildings around the city.

Many of Mexico City's art deco buildings are undocumented in that the details of the architect and the year of construction are often not known. We were able to sneak a look inside one such building on Colima. Behind a fairly austere exterior, albeit one with some rather nice corner balconies, we discovered a beautiful staircase, the bannister of which has some splendid art deco motifs. Eduardo told me that there are many such buildings right across the city and that he regularly discovers more when out walking. I think a book is in order!

Plaza Rio de Janeiro is a short walk from Colima and is home to one of the city's most interesting buildings. Designed by R.A. Pigeon and built in 1908 in the art nouveau style, the interior, including the doors was given an art deco remodeling in 1930 under the direction of our friend Francisco Serrano. The lobby and the atrium around which the flats are arranged is stunning with gorgeous wood panelling, a fountain, spectacular detailing on the staircase and stylized lettering on the elevator door. The main door is pure art deco with decorative lines, waves and discs. After dark the lobby is illuminated giving fantastic views of the interior from the tiled floor to that lovely fountain. Again, Eduardo managed to gain entrance to the lobby for us.

There is a bit of a story attached to Edificio de Rio de Janeiro. Widely known as "the witch's house" because of the gables which resemble a witch's hat, a previous resident, one Barbara Guerrero was known as a witch and referred to as La Pachita. Prominent people would consult her for advice which she would give without charge.

Art Deco cinemas can be found all over the world and Mexico is no exception. During my recent visit I was able to admire a number of cinema buildings, both in Mexico City and in Puebla. Several of the cinemas are now used for other purposes, mainly shopping centres but at least one of those I visited is still used for theatrical performances.

The Centro Historic in Mexico City has many fine art deco buildings, including the Orfeon Theatre at Luis Moya 40. I came across this building quite by chance after having visited the wonderful Museum of Popular Art at Revillagigedo 11, itself a great art deco building. Built in 1938, it was designed by the American architects, Drew and John Eberson. It was originally intended that the theatre should seat up to 6,000 people, in 1945 it had a capacity of 4,628. In 1996, after many years of neglect, it was given a full restoration part funded by the Disney Corporation. Today it seats just under 3,000.

The former Coliseo Cinema in Puebla was another find. Built in about 1940 it is now a department store but the exterior is still intact and what an exterior it is, covered in chevrons, portholes, vertical windows and zig-zags. Puebla is renowned for its Baroque style architecture and I did not expect to come across art deco here. The Coliseo was not the only example of the style that I found as I also came across a neglected but still elegant apartment block in Avenida 4 Poniente, close to the famous Uriate Talavera ceramics shop and factory. I have been unable to find any details of the architect or date of construction. And whilst on the subject of unexpected art deco, I also came upon a rather nice building in Oaxaca with clear deco influences including "rule of three decorative details on the facade and on the corner summits. Eduardo once said of art deco in Mexico that "you can find it everywhere". He was right.

Back to Mexico City. Edificio Cosmos stands on the traffic-filled Eje Central in the Centro Historico.  Cosmos has it all - portholes, elegant balconies, corner windows, fabulous lettering and what appears to be a glazed stairwell. The ground floor is given over to retail and the side street has several cheap food stalls, some of which seem to deposit their rubbish beside the Cosmos. Unfortunately the building is in need of some loving care. Again, no details of the architect or date of construction.

Polanco is one of the most affluent neighborhoods in Mexico City. As well as glitzy shops and fancy restaurants, Polanco plays host to the modern architectural gems - the Soumaya and Jumex museums. It is also home to Pasaje Polanco, a California style development with both commercial and residential buildings. Another one of Serrano's projects, it was completed in 1938. The internal part of the Pasaje includes some first floor residential units which with their rounded walkways and tropical planting reminded me a little of the Tiong Bahru district of Singapore. I only managed to take one photograph here before a very determined security guard told me I couldn't take any more. Shame. It's not the best picture but it gives you a hint of the grandeur.

There are art deco buildings to be found in most parts of Mexico City and even somewhat unexpectedly in other parts of the country too. One of the things I most enjoy about the city is strolling the streets and spotting some of the many deco details on the facades, doors and upper levels of buildings. Many of them contain references to the pre-colonial period, whilst others have wonderful lettering and numbering or classic deco motifs. Let's finish with a little indulgence and some lovely deco doorways and details from Mexico City! 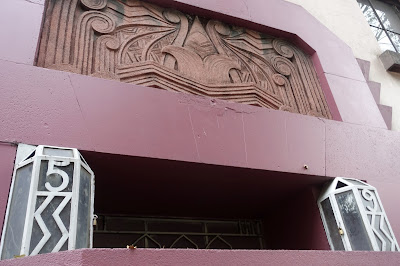 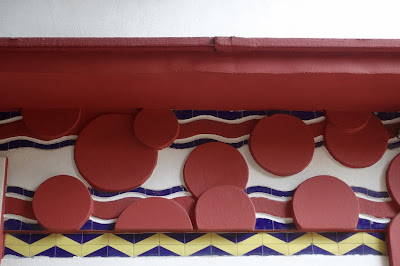 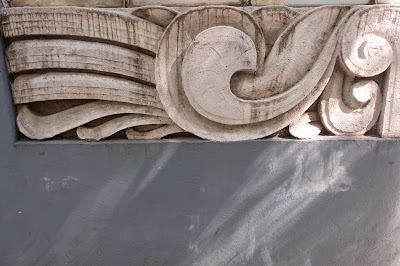 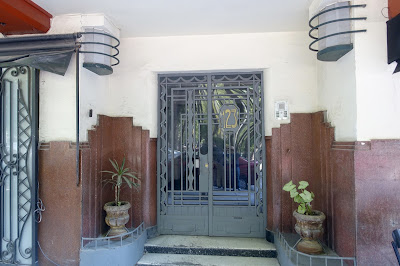 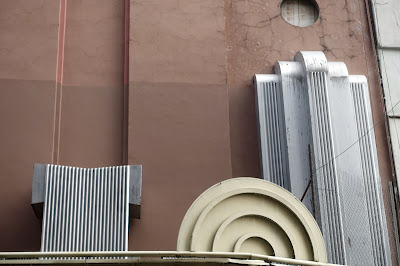 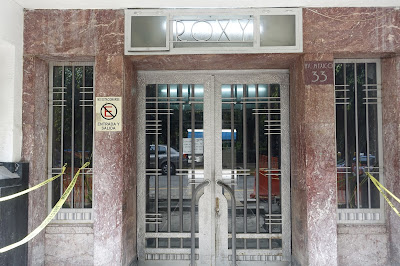 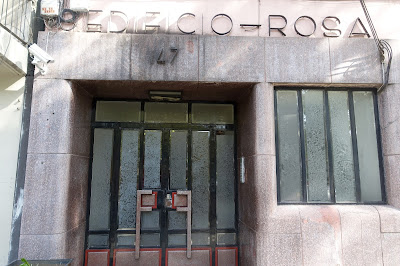 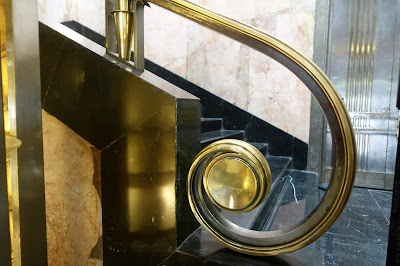 You might also like Mexico City art deco - you can find it everywhere. or Picture Post 35 - Mexico City - the abandoned Fronton or Journey Mexico's recent post on Mexican design (please note that this is an external blog)
Posted by Yekkes at 08:24