Manila lost many of its heritage buildings at the end of the Second World War when the Japanese and Americans fought a fierce battle for the city, causing destruction exceeded only by that of Warsaw. Many other architecturally important buildings have since been lost to neglect or to development projects. Despite this, Manila is still home to some fine examples of art deco architecture and during my recent visit I was privileged to be able to visit the Metropolitan Theatre, one of the Philippines' architectural jewels. Neglected for many years and currently surrounded by hoardings, there is fresh hope for the future as the theatre was recently purchased by the National Commission for Culture and the Arts (NCCA) for 270 million pesos (just under £4million). A similar amount has been made available for restoration which is about to begin and which I am advised will take 3-5 years to complete. 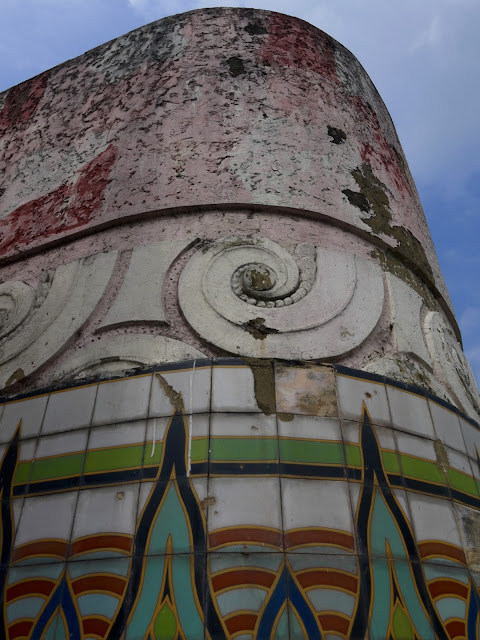 Designed by the brilliant local architect Juan Marcos Arellano and located at Mehan Gardens, the theatre was inaugurated on December 10th, 1931. During the construction period, Artellano explained that he wanted to design a modern building that would incorporate purely native ornamentation and stylised forms of indigenous flora, a reference to ancient Filipino art. His designs included a magnificent stained glass window on the facade bearing the theatre's name and an  auditorium ceiling made of fragrant Philippine wood decorated with brilliantly coloured panels  painted by his brother, Arcadio.

Judging by the response of various commentators of the time, Arellano more than achieved his ambitions for the theatre. In 1932, A. V. Hartendop, editor of the Philippine Education Magazine described the Metropolitan as "the most magnificent and impressive structure ever erected in the Philippines", whilst architect Bernardo Perez, a contemporary of Arellano's called it "a monumental masterpiece by a gifted architect". Having been inside the theatre I can only agree with them and wonder at the excitement of the audiences of the 1930's, visiting what must surely have been the cultural heart of the city and the place to be seen, either at one of the performances or in the large ballroom at the upper level. 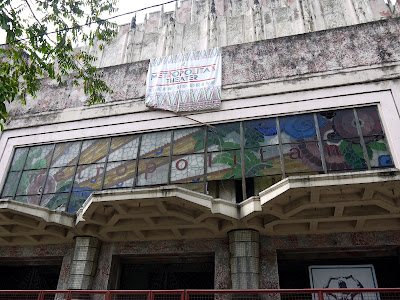 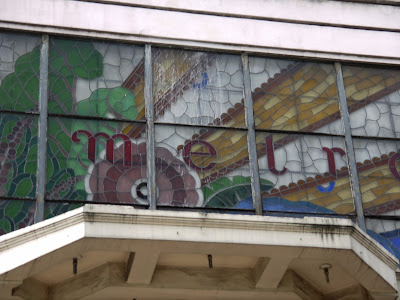 Not only was the finished work stunningly beautiful, it also benefitted from the most modern technologies with  excellent acoustics and state of the art lighting, able to stage operas, concerts and plays for a capacity of 1,670 people for over a decade. Leading musicians and entertainers from around the world played at the Metropolitan including classical maestros, Jascha Heifetz and Fritz Kreisler and Italian opera singer Amelita Galli-Curci.

A programme of sorts continued during the Japanese occupation from 1941-1945 with zarzuelas (a Spanish lyric-drama genre alternating between spoken and sung scenes that include opera, popular songs and dance), Filipino operas and stage shows. The iconic zarzuela performer, Atang de la Rama appeared at the theatre. You can hear her sing here. The Metropolitan sustained extensive damage in 1945 during the Battle for Manila and for the next thirty years or so was squatted and used variously as a boxing arena, cheap motel, basketball court and for bars of dubious integrity. Some restoration work was carried out in 1978 under the direction of the architect's nephew - Otilio Arellano and at the instruction of Imelda Marcos, the then Governor of the Metro-Manila area. This resulted in a brief run as a cultural centre before final closure in 1996.

The restoration of this huge structure is challenging. The building is not water tight and has stood empty and disused for several years. It is currently without an electricity supply but I was able to tour the interior and view the darkest parts with the aid of a torch, as well as to climb to the upper floors and access the roof. There are leaks in several places and Manila's very hot, very humid climate has not been helpful, but despite this, some of the internal features were in surprisingly good condition. Examples of this include the beautiful pillars at the base of the main staircase with their tiny glass mosaic tiles that sit on dramatic black posts, the grillwork on the staircase and ornate metal lettering above the patrons' toilets on the ground floor.

The exterior is a visual delight, even in its current condition, with its pink batik motifs, brightly colored patterned tiles, minarets and grillwork. I particularly like the pink painted box that sits on the rear of the building with its circular detailing. The level and extent of design detail both inside and out is breathtaking. There are differently patterned tiled sections on the facade as well as bas relief depictions of tragedy, comedy and poetry. Italian artist Francesco Riccardo Monti designed several sculptures for the exterior, including a pair of female statues standing guard at the side entrance. Monti lived and worked in the Philippines from 1930 until his death in 1958 and contributed to several other heritage buildings around the country. There wasn't a part of the building that I didn't like but perhaps my favorite decorative features are the stained glass over the main entrance with its sun rays and vegetation and the mangoes and bananas that decorate the auditorium ceiling that I glimpsed by torchlight. 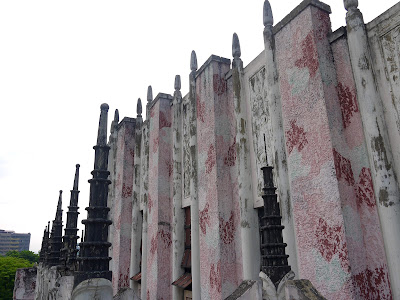 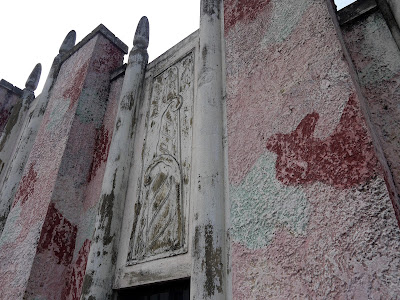 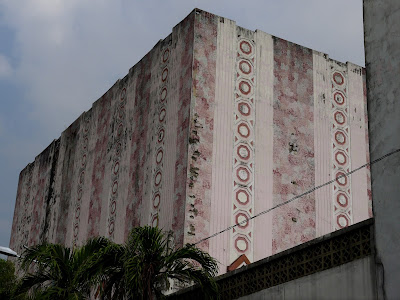 Its corner location is not as impressive as it originally was due to an overhead railway line having been constructed right beside it. However, if the restoration proceeds and brings those colours back to their full glory, it will once again dominate this busy intersection of one of the city, whilst a diverse and first rate programme could restore the Metropolitan to a place of importance on Manila's cultural  and social landscape and attract foreign tourists as well as local visitors. It is encouraging that Florencio Abad of the NCCA has said that the restoration will "...boost our country's tourism industry, as the proper management of our cultural heritage will support the gains of our economic growth". He also said that  the work is a "...cultural investment for future generations of Filipinos". That's great to hear.

The theatre is not the only significant art deco building in Manila and over the last few years there has been a growing interest in preserving what remains. A few key individuals have campaigned for recognition of the importance of the city's deco heritage, especially Ivan Man Dy who runs the Facebook group Art Deco Philippines and who spoke at this year's World Art Deco congress in Shanghai. There is also an excellent publication Art Deco In The Philippines edited by Lourdes R. Montinola which was extremely helpful in producing this post and which can be purchased in the bookshop on the Far Eastern University campus.

A very special thanks to Joanna Altamonte Abrera for arranging access to the theatre for me - and for getting me into a number of other wonderful places that will appear in future posts - maraming salamat! 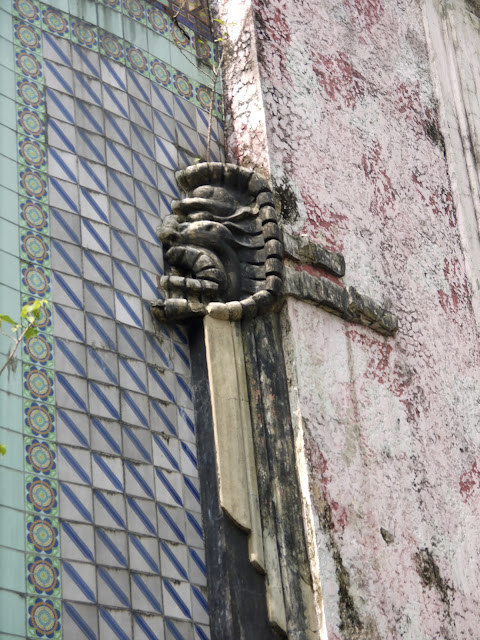 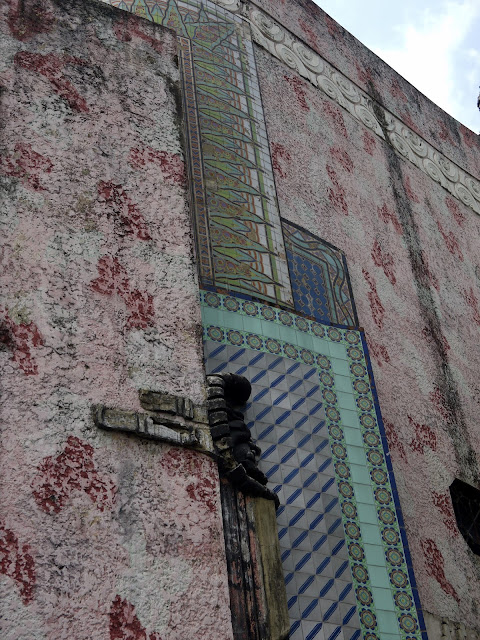 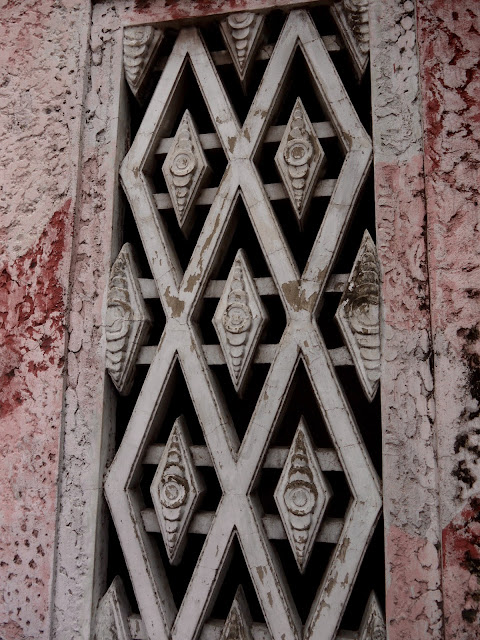 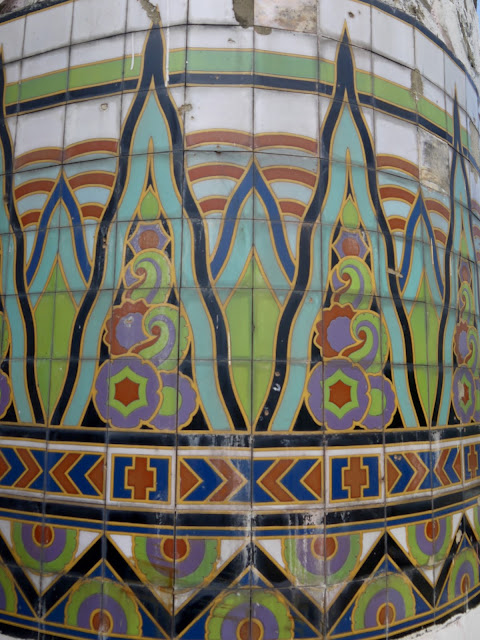 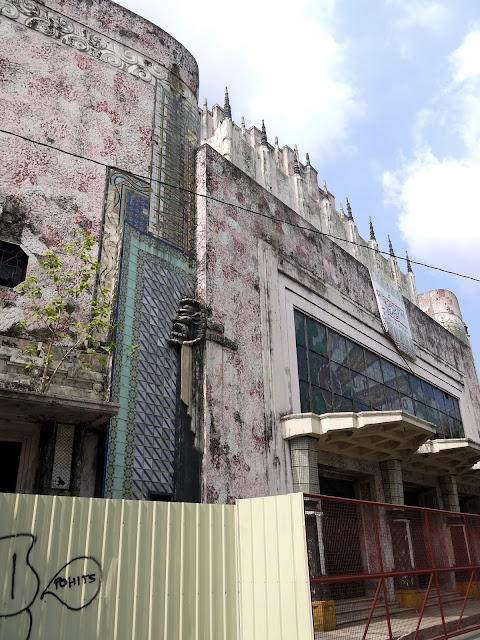