The first ever post on this blog was My Soho in December 2011. It covered some of my favourite Soho haunts and made reference to the loss of the unique character of the area as many of the long established businesses closed and the international chains began to move in.

That was in December 2011 and since then a number of other establishments have either gone or are under threat. The Astoria and music venues The 12 Bar and the Black Gardenia have been gone for a few years now, victims of the Crossrail development. Madame JoJo's a London institution has closed its doors for the last time in somewhat murky circumstances and the much loved Curzon cinema is also under threat - another potential victim of Crossrail. I'm all for improving transport across London but not at the expense of the city's cultural heritage and not if it means chaos in the west end for several years. Not surprisingly, a Save Soho campaign has been established.With all of this in mind, it's timely to revisit my beloved Soho and survey some of the remains of its rich cultural heritage. Here are some of my favourite Soho survivors. 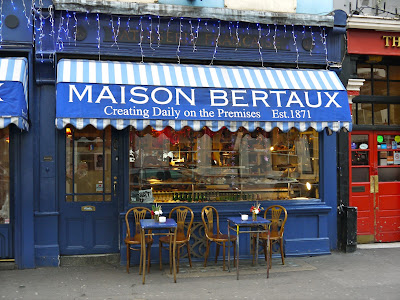 Coffee, cake and jazz are three of my passions and Soho provides the very best of all three. Devotees of  patisserie are faced with the problem of choosing either Maison Bertaux in Greek Street or the original Patisserie Valerie in Old Compton Street. Both have a superb range of cakes and pastries, stunning window displays and interesting histories. Bertaux opened in 1871 and is the oldest patisserie in the city. Started by French refugees fleeing the Prussian siege of Paris, the owners lived upstairs and baked on the ground floor. Tradition has it that a lady of the night and a tailor also lived in the building so along with the tea rooms there was something for everyone. I have to confess to being a major fan of Berteaux due largely to the cakes but also because it is one of the few remaining places in the west end where you can see what were once called "characters" and where the regulars are known and recognised by the staff. My favourite place to sit is in the downstairs room where customers make their choices from the window before taking a seat either here, upstairs or in the room next door which was added a few years ago. There is occasional theatre in the upstairs room, but the whole place is dramatic, with its collection of assorted "stuff" in the downstairs room adding to the atmosphere. Those of you who have been will know what I mean! 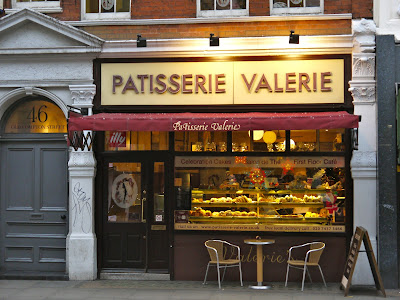 Patisserie Valerie is a relative newcomer in comparison with Maison Bertaux. Originally in Frith Street it was founded in 1926 by one Madame Valerie from Belgium who wanted to introduce Belgian patisserie to London. The cafe was immediately successful and remained so until the Luftwaffe put a stop to things by bombing the building during the Second World War. Not deterred, Madame Valerie relocated to the current premises in Old Compton Street which retains much of its original 1950's decor. Both Bertaux and Valerie had a reputation as venues for secret assignations and each had their loyal customers who would not set foot in the other establishment. Patisserie Valerie is now a chain with several branches across London and in other parts of the country but the original Soho branch has kept its character and still has the air of an independent cafe.

The Algerian Coffee Store is a few steps from Patisserie Valerie at 52 Old Compton Street. Walking along the street you are likely to notice the aroma of freshly ground coffee several yards before reaching the red fronted shop. Founded in 1887 by one Mr Hassan, it has been under the direction of Paul Crocetta and his family for the last 40 plus years. Inside, there are more than 80 coffees from countries as diverse as Ethiopia, Bolivia, India and Papua New Guinea.  The beans are ground in front of you and you can ask for cardamoms and other spices to be added. There are also 120 types of tea, marzipan biscuits, Turkish delight, chocolates, mints and different kinds of coffee makers. The staff are extremely knowledgeable and can advise what to choose according to your preference. 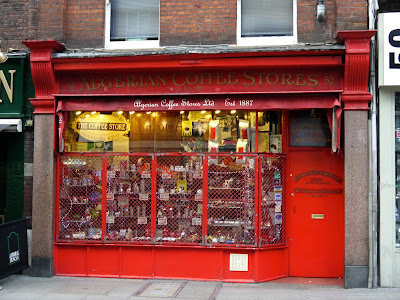 Just around the corner from the Algerian Coffee Store, Bar Italia in Frith Street is another Soho survivor and a great place to drink mind blowingly strong coffee. Opened in 1949 by Italian immigrants Lou and Caterina Polledri, the cafe is still owned by the family today. The Polledris came to London in the 1920's and established a traditional Italian cafe in Long Acre, Covent Garden during the 1930's. Lou was interned as an enemy alien during the Second World War but Caterina managed to keep things going until he came home again.

When Bar Italia opened it quickly became a focal point for the Italian community, many of whom had been interned during the war years and who needed somewhere to meet, to swop news and to hear about employment opportunities. The cafe quickly gained a reputation for excellent coffee and was part of the "espresso revolution" that swept London in the late 1950's and 1960's attracting young people, especially hordes of "mods" who would park their Lambrettas outside. Bar Italia opens at 7 a.m. each day for breakfast, stays open until 5 in the morning and is always busy. The walls are covered with photographs of visiting celebrities whilst football matches are screened on a TV screen at the back of the cafe. I remember walking through Soho during the 1994 World Cup when an Italy game was being screened whilst the cafe burst at the seams with cheering football fans! Bar Italia has retain much of its glass and chrome decor as well as the original stone floor laid by family member Torino Polledri who was a terrazzo specialist. 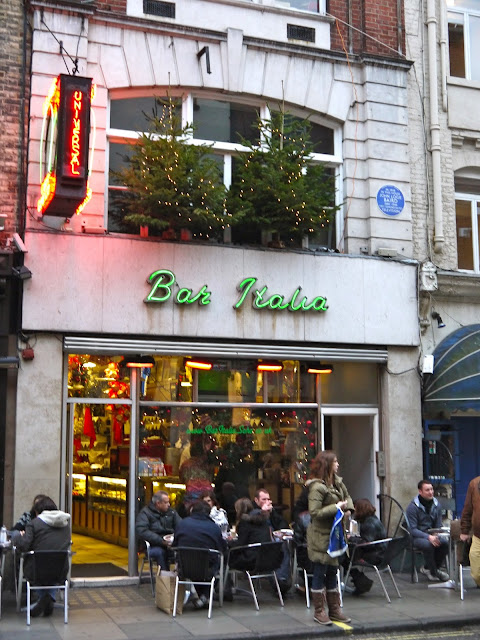 Back onto Old Compton Street and at number 61 there is another Italian establishment, the I Camisa delicatessen. The shop has been here since 1961 but was originally at number 66 in the same street, opening in 1929 and closing ten years later when Ennio and Isidor Camsa were interned, first at Lingfield racecourse in Surrey before being sent to Warth Mills in Bury. The  Camisas then struck lucky. They were not included in a group of Italians placed on a luxury liner for deportation to Canada. They were lucky because the ship was sunk by a German torpedo and 730 lives were lost. The Camisas were released at the end of the war and returned to Soho to reopen their store. The shop is a delight with its cheeses, fresh pasta, delicious breads, wines and other Italian foodstuffs and like its near neighbour the Algerian Coffee Store, it gives off enticing aromas that help create the long queues that can often be found in the shop. 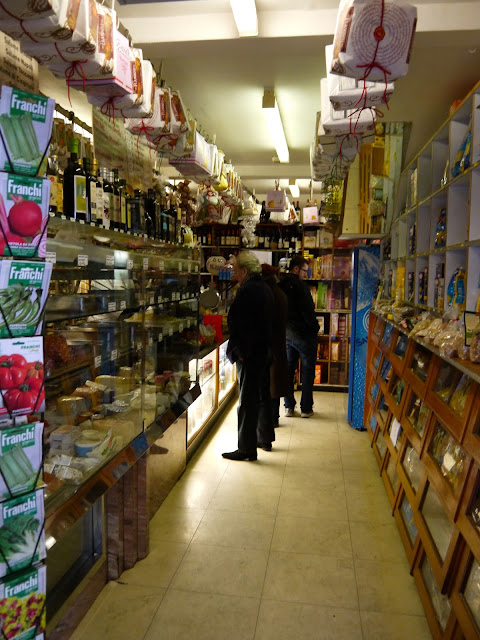 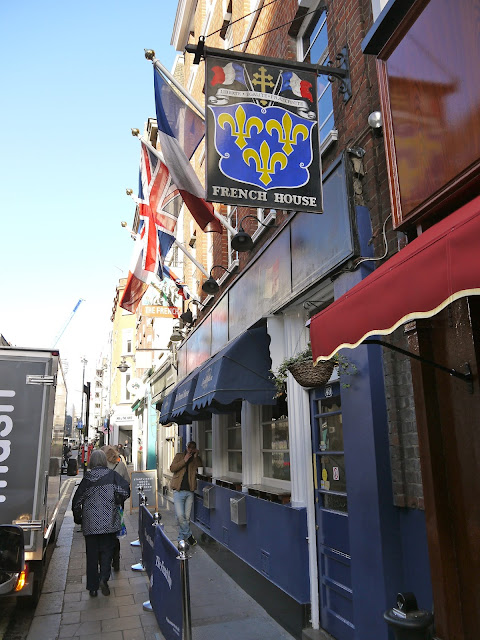 I rarely go to pubs these days but still enjoy an occasional visit to another Soho institution - the French House at 49 Dean Street. This Soho institution opened as The Wine House in 1910 under the management of German landlord Herr Schmidt. Schmidt was deported when the First World War commenced and was replaced by French speaking Belgian Victor Berlemont. Berlemont renamed the pub The York Minster and had a reputation for dealing with "difficult" customers by saying "I'm afraid one of us will have to leave and its not going to be me". During the Second World War the pub became a gathering place for French emigres including Charles de Gaulle who used the upstairs dining room.

After the war, the pub began to attract an artistic, theatrical and literary crowd including Lucian Freud, Francis Bacon, Brendan Behan and Daniel Farson. Farson had the distinction of being barred from the pub for behaviour he couldn't recall. Must have been something to do with the drink! The walls of the bar room are still decorated with photographs of London's culture elite from that period. In 1951, Victor's son, Gaston took over. A real Soho character with his flamboyant moustache (which young women would sometimes be invited to examine) and frequent hand kissing, he further emphasised the French connections of the pub. Like his father he was also able to deal effectively with drunks once famously intervening when a woman had thrown her drink in the face of a man who had been annoying her by saying "But madame, I see your glass is empty" and then refilling it.

The French House has not been without a racy side. In the early 1950's it came close to being closed down due to "goings-on" in the toilets. It was also here that Francis Bacon met model Henrietta Moraes and asked her to pose nude for him. Photographer John Deakin took pictures of Moraes for Bacon to work from before going on to offer copies for sale to visiting sailors. Very entrepreneurial.

The French House is alive and well although it is sad that the upstairs restaurant is now under separate management and serves Italian rather than French food. I have happy memories of sitting in that tiny dining room which appeared twice its real size due to the mirrored walls, enjoying good food and from my window seat watching all human life pass by in the street below. Gaston died in 1999 but several of his rules have been retained, including selling only half pints and banning mobile phones in order to encourage conversation!


And finally, the best jazz club in the world. Ronnie Scott's originally opened in Chinatown's Gerrard Street in 1959 before moving to its Frith Street home in 1965, offering live jazz six nights per week. The club featured such giants of the jazz world as Ella Fitzgerald, Count Basie and Sarah Vaughan as well as emerging and avant-garde musicians. Scott, himself an accomplished saxophonist ran the club until his death in 1996. I saw him just once when visiting London as a student in 1982. I visited the club with four student friends and saw Buddy de Franco perform. We were of course broke and managed to purchase only one bottle of Laski Riesling wine between us for the then enormous sum of £7 before rustling up enough change to buy a couple of unappetising burgers to share. Scott introduced the act, told a few jokes and threatened expulsion if people spoke during the performance. And he meant it. If only the same were true these days.


The club reached a peak in the early 1970's but then suffered a decline, facing potential closure at the end of the decade until Island records owner Chris Blackwell provided an injection of cash to keep it going under Scott's management. In more recent times, Ronnie's has been totally refurbished, improved somewhat its once dreadful food and formerly poor service and continues to attract the best jazz musicians in the world. Over the last few years I have seen, amongst others, Avishai Cohen, Dee Dee Bridgewater, Nicola Conte, Ramsey Lewis, Lonnie Liston Smith and Stacey Kent perform. This is probably my favourite place in all London with its great music, thrilling atmosphere and important history. 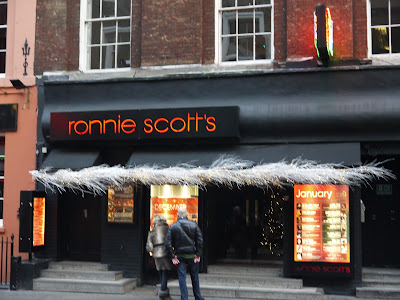 Old Soho is gradually disappearing and there is a serious threat from that more will be lost due to increasing rents and the Crossrail development. Despite this, several of the older, cherished businesses continue to thrive and to attract new customers as well as hanging on to their loyal older clientele - like me. When Gaston Berlemont was asked what made the French House (and in my view Soho) special he said it was about the people "…they themselves create an atmosphere. Its no use putting up a couple of plastic onions and saying you're creating a French atmosphere, it doesn't work like that. Atmosphere is a human thing concerning hearts and souls". I agree with Gaston - but people need places to meet in which to create an atmosphere. It will be a sad day for London if any of these remaining Soho survivors disappear. 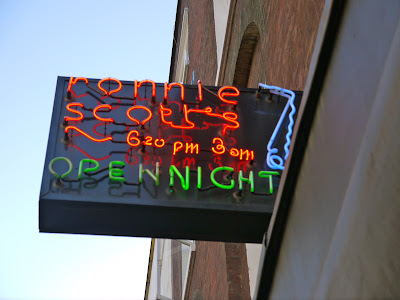