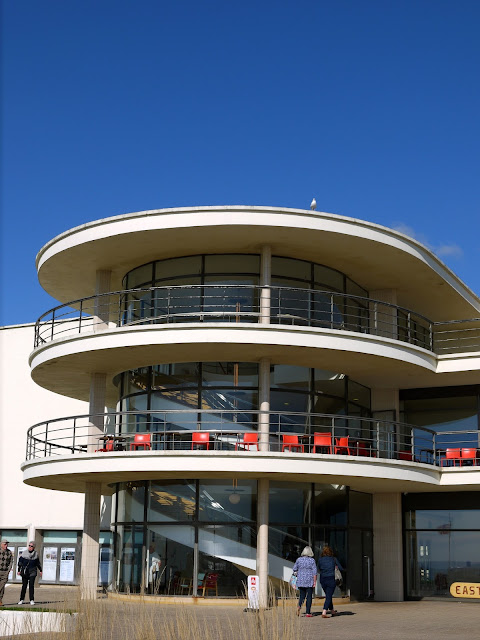 The de la Warr pavilion is surely the most iconic modernist building in Britain. Built in 1935 to the competition winning designs of Erich Mendelsohn and Serge Chermayeff, this steel, glass and cement beauty overlooks the English Channel at Bexhill-on-sea, a small Sussex seaside town.

The competition was the idea of the Herbrand Sackville, the 9th Earl of de la Warr, Mayor of the town and despite being an aristocrat, a committed socialist. He persuaded the town council to develop the seaside site as a place for social and cultural activity and the design competition was announced in the Architects' Journal of February 1934. The brief for the building included a performance hall to seat 1500 people, a 200 seat restaurant (also to be used for dancing), a reading room and a lounge. The budget was set at £50,000 but like many building projects it increased to £80,000. Overseen by RIBA, the competition attracted more than 230 entrants.

The Earl took keen interest in the design and was clearly a fan of the modernist style saying "It is the intention of the promoters that the building should be simple in style and suitable for a holiday resort in the south of England. Character in design can be obtained by the use of large window spaces, terraces and canopies. No restriction as to style of architecture will be imposed but buildings must be simple, light in appearance and suitable for a holiday resort. Heavy stonework is not desirable. Modern steel-framed or ferro-cement construction may be adopted ". Clever chap that 9th Earl. This brief must have excited architects who worked in the modernist style, especially Mendelsohn and Chermayeff with their welded steel frame construction and extensive use of glass and cement. 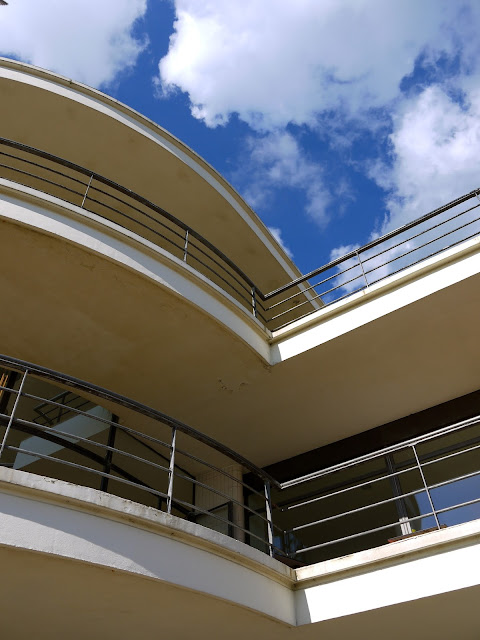 The Earl may have been pleased with the outcome of the competition but not everyone was. Both architects were Jews and Mendelsohn had fled Nazi Germany in 1933, whilst Chermayeff, born in Grozny (then part of the Russian Empire, today in Chechnaya) had moved to the UK at a young age and become naturalised. Following the announcement of the winners, the Architects Journal printed the following letter from a group of British architects "The Royal Institute of British Architects, whose primary duty is presumably to protect the interest of British Architects, betrays them by encouraging professional activities in this country of those aliens who have found it advisable to flee from their own lands…"

There was also concern about the spiralling costs of the building which was initially to be funded by the Council levying an extra 2d (pre decimal currency) on the rates (read Council Tax for today). Spiralling costs meant this would need to rise to 5d, causing serious indigestion on the part of the ratepayers association. The Council secured a loan from the Ministry of Health to cover the increase, the Ministry believing that Mendelsohn's proposals, which included a swimming pool, could contribute to the health of local people, reflecting social policy in other parts of the UK including the Peckham Experiment. An enquiry took place before the money could be approved and eventually due to legislative limits on rates increases, only £70,000 could be loaned. A further problem arose when it became known that the cost of the pool was not included in the original financial estimates. Another loan was applied for and would have been granted but was scuppered by the incensed and aforementioned ratepayers association and the pool was dropped.

Despite this and several other setbacks, construction began in January 1935 and on 12th December of the same year King George VI came to open it. The pavilion attracted world class performers including actress Sybil Thorndike, singer Paul Robeson and violinist Fritz Kreisler. But again there was controversy with a division of opinion over what the artistic direction of the facility should be - "high brow" or "low-brow"- and the relative costs of running an extensive programme. This culminated in a meeting of over 800 residents in March 1936 where significant support was displayed for sustaining a high quality programme but the local politicians were not keen and the council's subsidy was reduced.  A few years later, during the Second World War, this became academic when the building was requisitioned by the military, anxious that there might be an attempt at an invasion of the south coast.

The pavilion suffered some minor bombing damage during the war but perhaps greater damage was done by the Council itself which took the building back after the war and made a number of inappropriate and damaging changes. Thankfully, it was listed in 1986, with Grade I status, preventing further damage and in 1989 the Pavilion Trust was established to protect and restore the building. £6 million of Lottery funding in 2002 made restoration possible and today the pavilion has an extensive programme of activity with some excellent exhibitions, concerts and theatre, fulfilling the role of a contemporary arts centre. 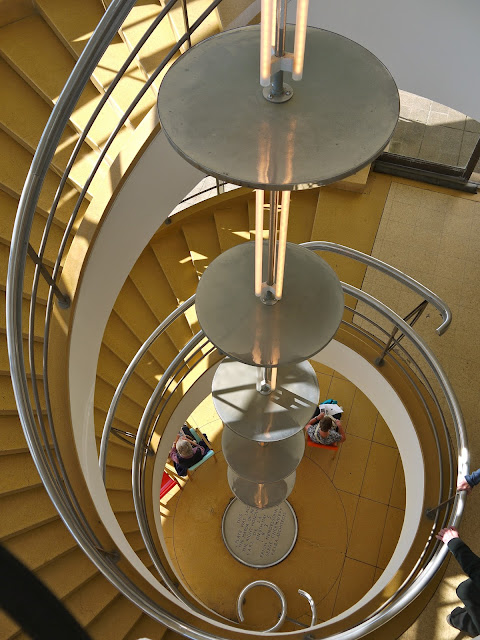 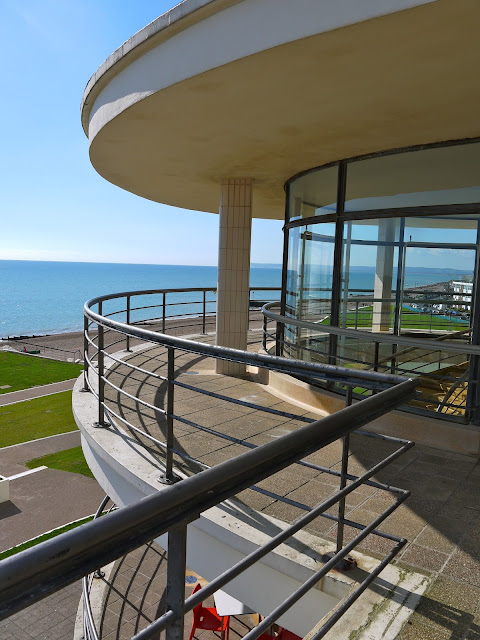 One of the de la Warr's most striking features is the glass encased spiral staircase on the south terrace with its anodised steel handrails and fabulous suspended steel and chrome lamp. The lamp runs the full length of the staircase and was modelled on a design Mendelsohn had produced for the German Metalworkers Union building in Berlin. The handrail spirals to a tight curl at ground floor level whilst the light flowing through the windows makes changing shapes and shadows on the stairs and the lamp's discs. The glass case is itself enclosed by two beautifully curved terraces that on a warm, sunny day can give the south coast of England the illusion of a Mediterranean scene, especially with the brilliant white cement of the rest of the building set off against the blue sky. Beautiful.

Despite having lost some of its original features and having gone through long periods of neglect, the de la Warr is today much loved and in good condition. I visited the pavilion yesterday for the first time in a few years and found it buzzing with visitors to the current exhibition, people enjoying the autumnal sunshine on the cafe's terraces and of course, architectural tourists like me enjoying this modernist masterpiece of the south coast. There is also a small shop on the ground floor where you can buy gifts, postcards and books including the excellent de la Warr Pavilion - the modernist masterpiece by Alastair Fairley which includes many photographs and drawings.

There is much to thank the former Mayor for - few towns of this size have a facility of this quality and scale - despite the financial challenges of running arts venues and it is fitting that the building was given his name. 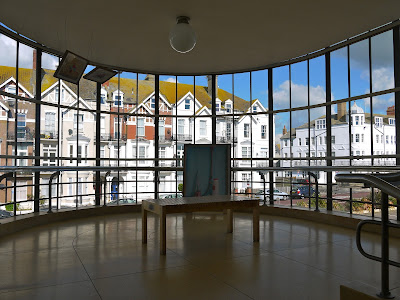 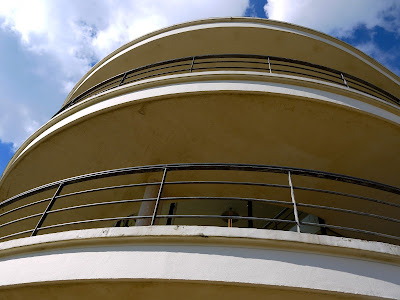 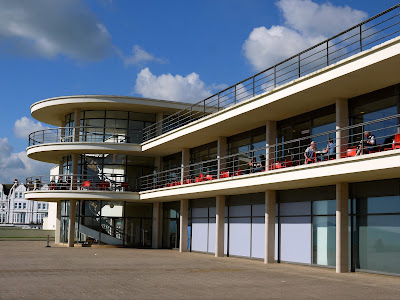 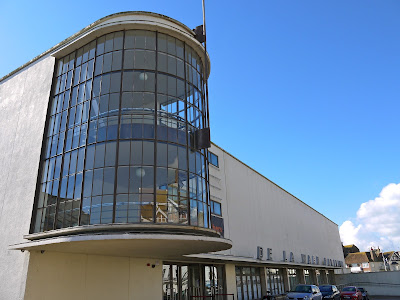 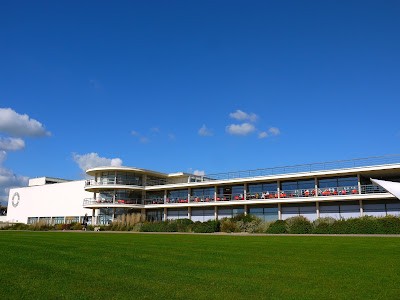