A rediscovered classic, the art of the possible, the world in 1946 and looking after the family silver - Jewish Book Week 2015!

This year's Jewish Book Week began at the weekend in the superb Kings Place venue and once again is proving to be the highlight of the literary year. On Sunday I spent four consecutive hours listening to a range of authors, commentators and experts on a range of subjects. 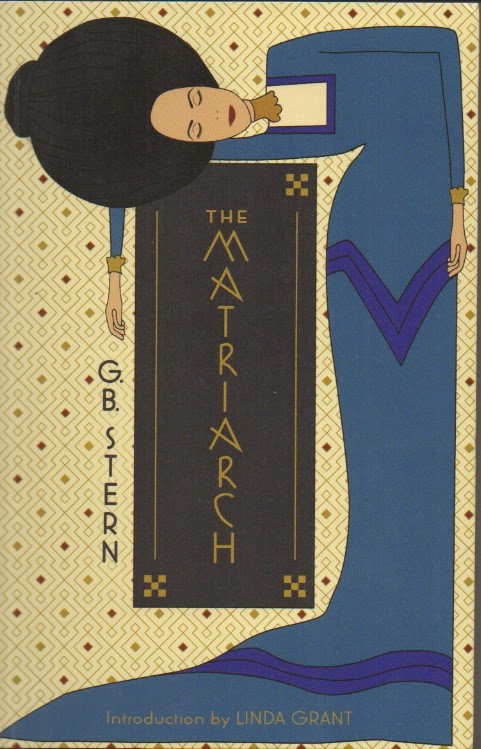 First up, Rabbi Julia Neuberger and award winning author Linda Grant discussed the recently republished GB Stern novel The Matriarch, variously described as a less serious Buddenbrooks, a forgotten feminist classic and a genre of Jewish literature no longer seen. The book is the first of a series of novels based on the author's own family, the characters being partially assimilated Jews with origins in Central Europe and living in London's fashionable West End. Anastasia Rakonitz, the matriarch of the title rules over her family with a rod of iron and is one of several strong female characters who maintain appearances even when the family's fortunes fade. Both Grant and Neuberger spoke about the dominance of domestic detail in the book, an obsession with food and clothes, witty descriptions of the daily life of the bourgeois Rakonitz family and the general weakness of the male characters. Both also made interesting points about swish wealth and knowledge needing to be portable in the event of regular flight from program and persecution with clothing (tailoring) representing the ultimate portable  and sustainable skill.

Although set in an earlier decade, the book was first published in 1924 and in the UK was originally entitled Tents of Israel. Of its time, the book includes a number of anti-Semitic comments including from the Rakonitz family members, ambivalent about their own Jewishness, including a reference to one character as "fat and oily…a nose that really was Jewish…an aggressive arriviste…" The original title is interesting as during the late nineteenth and early 20th centuries, many established British Jewish families preferred to refer to themselves as Israelites rather than Jews. Daughter Toni in particular longs to break away from the societal restrictions of being Jewish and it is thought that the character is based on the author herself, who ambivalent about her ethnic and religious origins, converted to Catholicism after the Second World War.

Gladys Bronwyn (originally Bertha) Stern was a best selling writer of her time. She published over 40 novels, several plays, short stories and other works and mixed with the great and the good of the inter-war literati, numbering Rebecca West, Noel Coward, H.G. Wells and Somerset Maugham amongst her acquaintances.  Despite this she is practically unknown now, as Linda Grant said "a dark warning from the past" that literary fame can soon fade away once the books stop coming.

From 1920's bourgeois fiction I moved on to an interview with Barbara Winton, daughter of Sir Nicholas Winton who arranged the rescue of 669 mostly (but not entirely) Jewish children from Czechoslovakia in 1938 and 1939 before the outbreak of war prevented him bringing even more out. Winton spoke of her father's belief in helping those who are helpless, no matter what their ethnicity, religion or background and of the great lengths he went to, to secure appropriate homes in the UK for the children he managed to get out. He was a modest man who did not seek recognition for his work which was little known until Esther Rantzen ran a TV feature on him in the 1980's, surprising him  with a reunion with several of the now middle-aged to elderly children. Ms Winton has recently published a biography of her father If Its Not Impossible which is a reference to a statement made by he made in relation to the rescue.

The sessions included the opportunity to view the heart breaking photographs of children saying goodbye to their parents at the station in Prague before boarding the trains for Britain. Very few of them would ever see their family members again as 89% of Czech Jews and 83% of Slovak Jews were murdered in the Holocaust, figures only exceeded by the devastation to the Polish, Baltic and German/ Austrian communities. The parents clearly understood what was in store for them, many even agreeing to give their children up to non-Jewish homes in order to save their lives.

Barbara told the audience that her father's original family name was Wertheim, being of German Jewish origin but that the family had converted in the previous generation. She also let us in on a a secret. Her father was to be given the freedom of the City of London the next day, February 23rd. This is a particularly poignant honour given that he had resigned his post as a broker in the stock exchange back in the 1930's and had been active in left wing circles prior to the outbreak of war. Described by his daughter as a private and relatively unemotional man, he is now 105 years old and still interested in politics, meeting from time to time with his MP - Theresa May, Secretary of State and the Home Office and telling her his views on her policies! 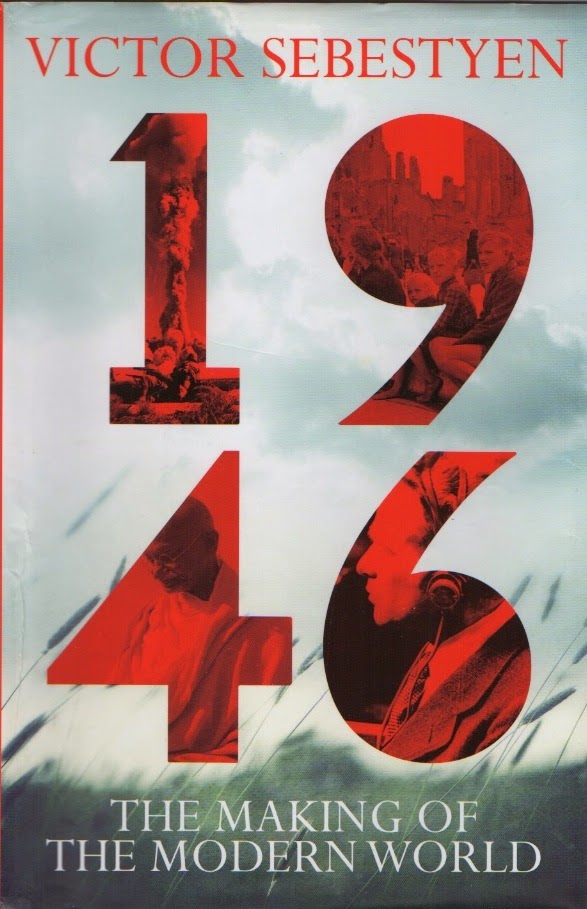 Next up was Victor Sebestyen, interviewed about his excellent book (I know this because I've read it!), 1946: The Making of the Modern World. He explained that it began as a book about the beginnings of the Cold War, but quickly developed into a wider review of the world in the immediate aftermath of the Second World War, the continuing conflict in many parts of the world and the impact of some of the decisions taken then, some of which is still being seen now.

Sebestyen reminded us that although Germany and Japan were defeated in 1945, civil wars continued in the Ukraine and in Greece, claiming 75,000 and 150,000 lives respectively. His book examines these two conflicts but also looks at the Sovietisation of Eastern Europe in the immediate post war period, the pragmatic (for which read cynical) abandonment of the de-Nazification process in Germany (and its complete avoidance in Austria) and the success of the Marshall Plan in Japan. The latter two developments carried out with the sole intention of preventing communism from gaining ground in these two countries.

His comments in relation to the ultra right wing General McArthur were especially interesting. McArthur had astonishing powers in Japan following the country's surrender. His imposition of democracy on what had been a feudal society, including redistributing the land to the peasants was  described by Sebestyen as more left wing than some of the things the Soviets were doing!

Many of the events described in 1946 echo today, not least the situate in the Ukraine. When asked if he thought Putin was another Stalin and trying to re-Sovietise Eastern Europe he replied that he thought not, rather that he is just "an old fashioned nasty Russian nationalist, offering no intellectual difference in lifestyle…this is not an ideological thing at all". Interesting. I hope he's right.

Finally, architectural and built heritage historian, Sharman Kadish warned us of the very real risk of losing many of our older synagogues in the inner cities as congregations decline, close or move away to the suburbs or other cities. A number of our finest buildings have become neglected, left vacant and vandalised including some real treasures.

Sharman talked us through the experiences of Singers Hill synagogue in Birmingham and Princess Road in Liverpool both at risk of closure just a few years ago but now restored with reviving congregations and playing important roles in the lives of both the local Jewish and wider communities. She offered pragmatic solutions to maintaining large, costly buildings in small and declining communities and spoke of the importance of maintaining a visible Jewish presence that welcomes outsiders to its buildings especially during these dark times. Her session was extremely interesting with both good news stories and things to worry about. it also inspired me to visit a number of our architectural treasures in Bradford, Manchester and other cities. Ms Kadish is the author of several books on Jewish religious architecture and has a new edition of her excellent Jewish Heritage In England An Architectural Guide, coming out soon. 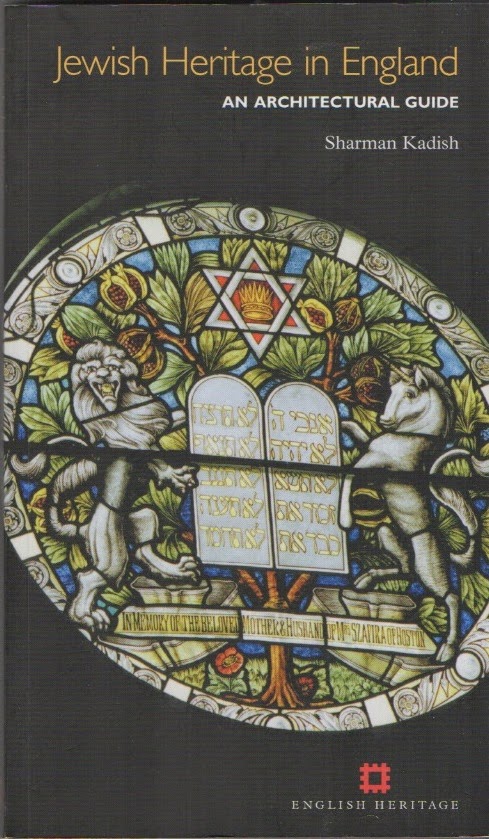 As ever, this year's Jewish Book Week offers a diverse and engaging programme that will attract Jewish and non-Jewish audiences alike. Where else could you get such a varied and high quality literary programme over the course of a single evening on a cold, dark, wet and windy February Sunday? And there are still four days of events to come!
Posted by Yekkes at 23:07