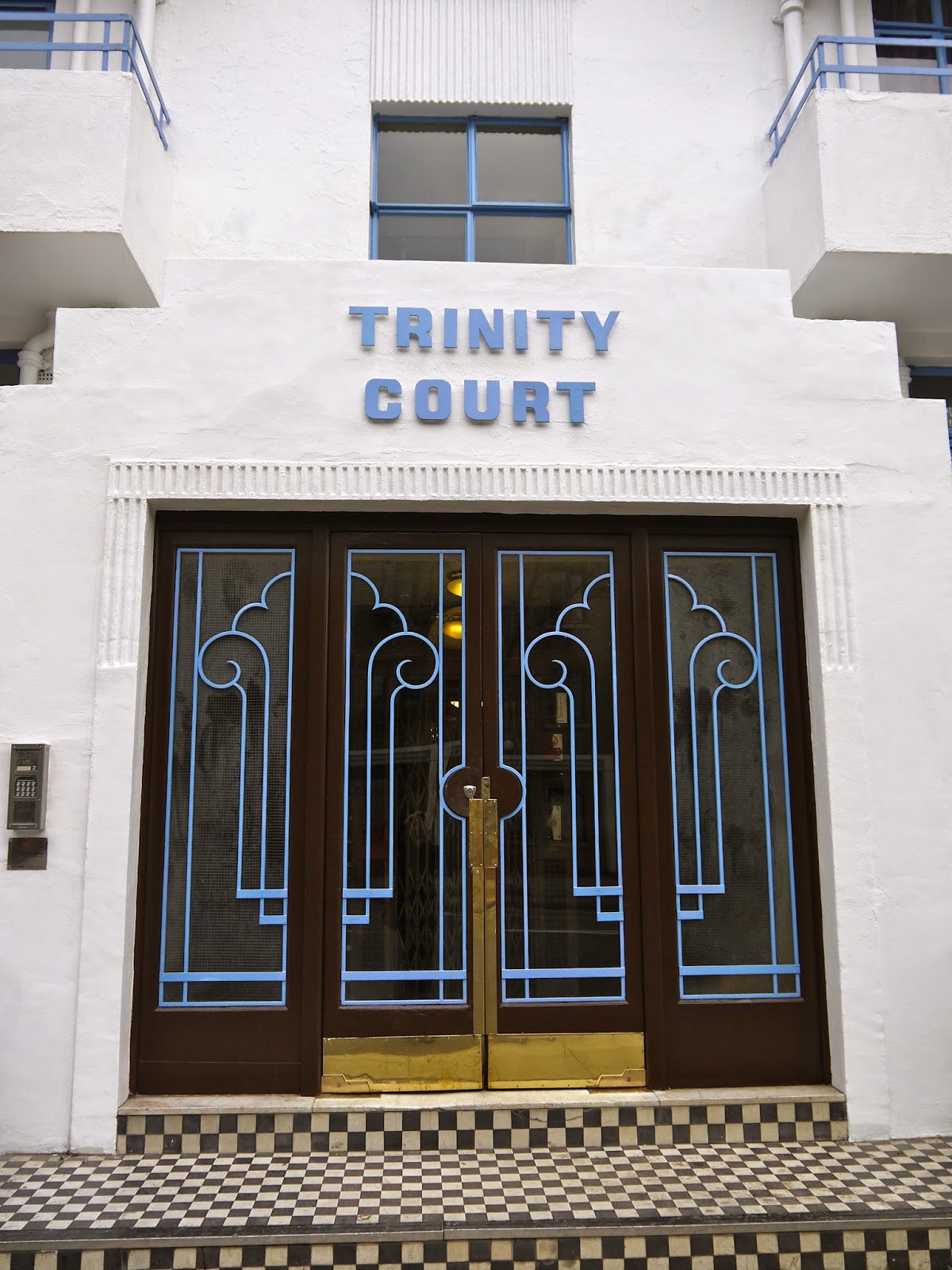 Grays Inn Road in December can be a bit, well, grey. Earlier this year on one of London's sunny summer days I went there to photograph Trinity Court, a beautiful modernist block completed in 1935. On arrival I found the building to be covered in scaffolding with a sign informing residents, passers-by and would be photographers that the works being carried out would not be completed until November. November can sometimes mean December or even January here so I left it until today to chance returning. No sunshine today but the recently revealed, repainted, repaired and restored Trinity Court was looking very beautiful with its white exterior and light blue details.

Architects F. Taperell and Haase designed an eight storey rectangular building with the shorter sides parallel to the street. The facade has a magnificent entrance with double glazed doors bearing decorative tracery, whilst a stepped pediment above carries the block name in clear blue letters. I especially likes the black and white checkered details on the external steps. Above the pediment there are seven metal framed windows, separated by attractive vertical ridges that culminate in a second pediment which hides the housing for the lift shaft at roof level. There are balconies on each side of the building, accessed through a door adjoining bay windows with uniform blue metal frames. The balconies also have blue balustrades with some decorative detail. 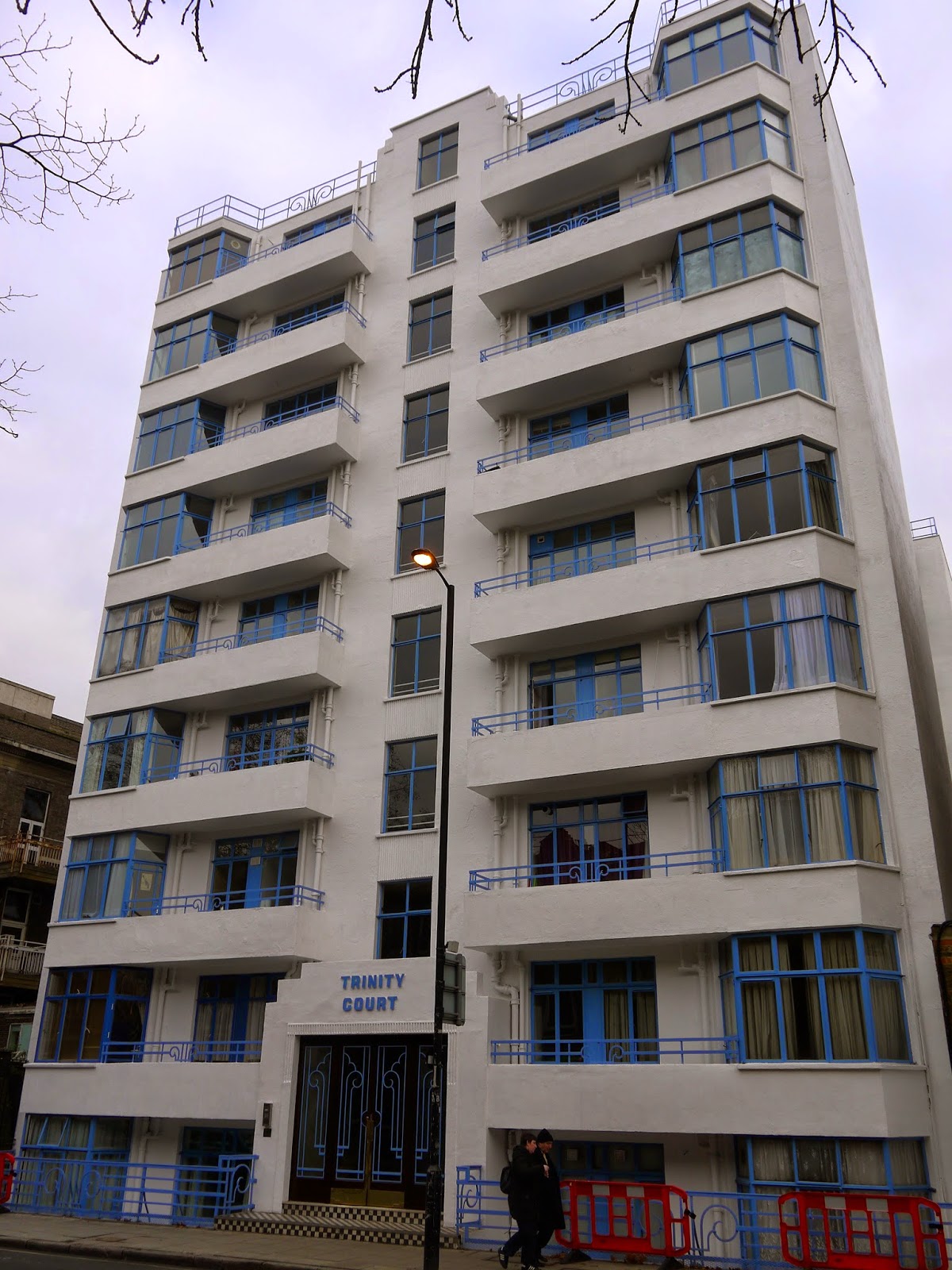 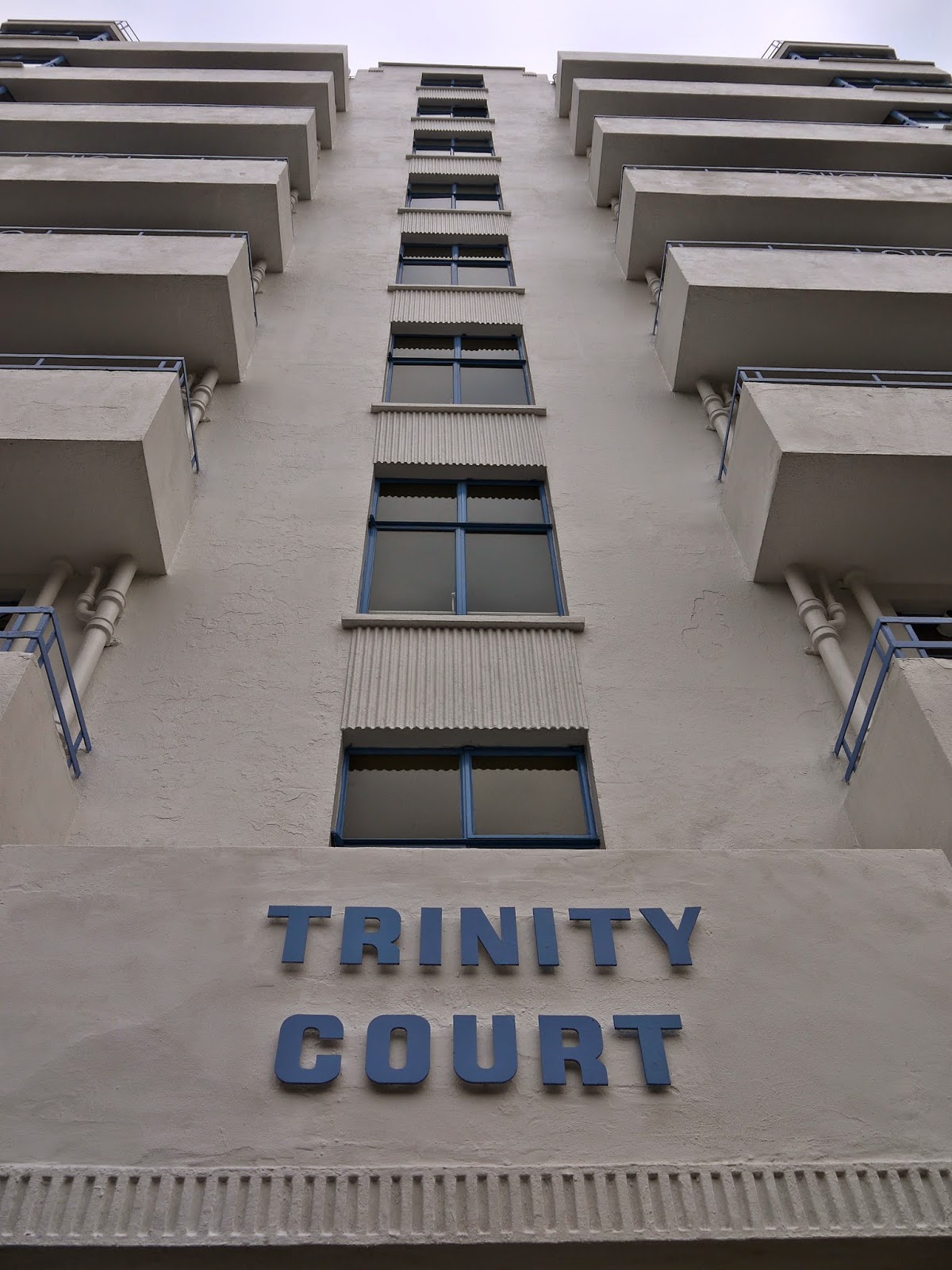 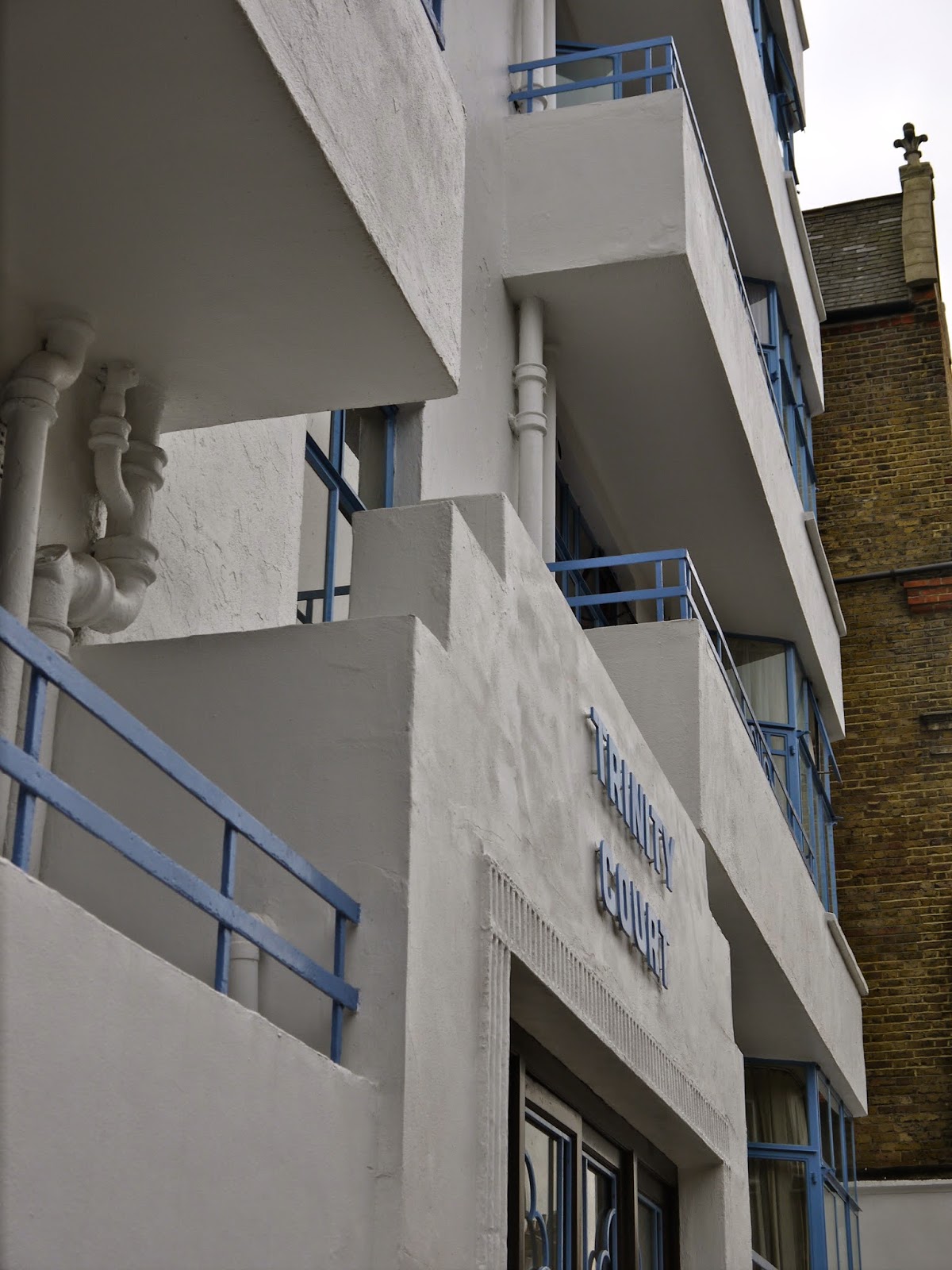 Haase and Taperell were responsible for designing buildings elsewhere in London, including in Soho Square and the Heath View block of flats in Kentish Town. Herbert Haase turns up in the 13th May 1931 edition of the Singapore Free Press and Mercantile Advisor, as the victim of a robbery from his house in Marylebone. Apparently thieves made off with several valuable paintings (including a Van Dyck), several Persian rugs, 22 Chinese ivory figures, a vase and four boxes of cigars - each containing fifty. He must have liked a smoke.

Trinity Court backs on to the former St. Andrews Holborn burial ground which is now a public park. There are a number of aged, mold covered gravestones remaining. In the summer the park attracts workers from the many nearby office blocks who bring their lunch there. This is very different from the first time I visited Trinity Court - perhaps 20 years ago when the park was inhabited by drunks and homeless people and drugs detritus was clearly visible. It was much nicer today despite the damp weather, although I wasn't keen on the bull terriers being walked there! The rear of the building mirrors the street facing facade with the exception of having a smaller entrance and an odd modern lobby.

It is great to see one of London's remaining modernist gems restored and cared for, especially in a part of the city that has seen so much change in recent years. If anyone from Open House ever reads this, Trinity Court would make a great addition to the programme if residents could be persuaded - even if just to get a proper look at what might be the original lift. I've only been able to squint through the main doors but it looks very elegant. Open House might be the only way I ever get inside. I looked the building up on Zoopla today to be advised that a one bedroom flat will cost me about 750,000 pounds. Of course there's always the lottery... 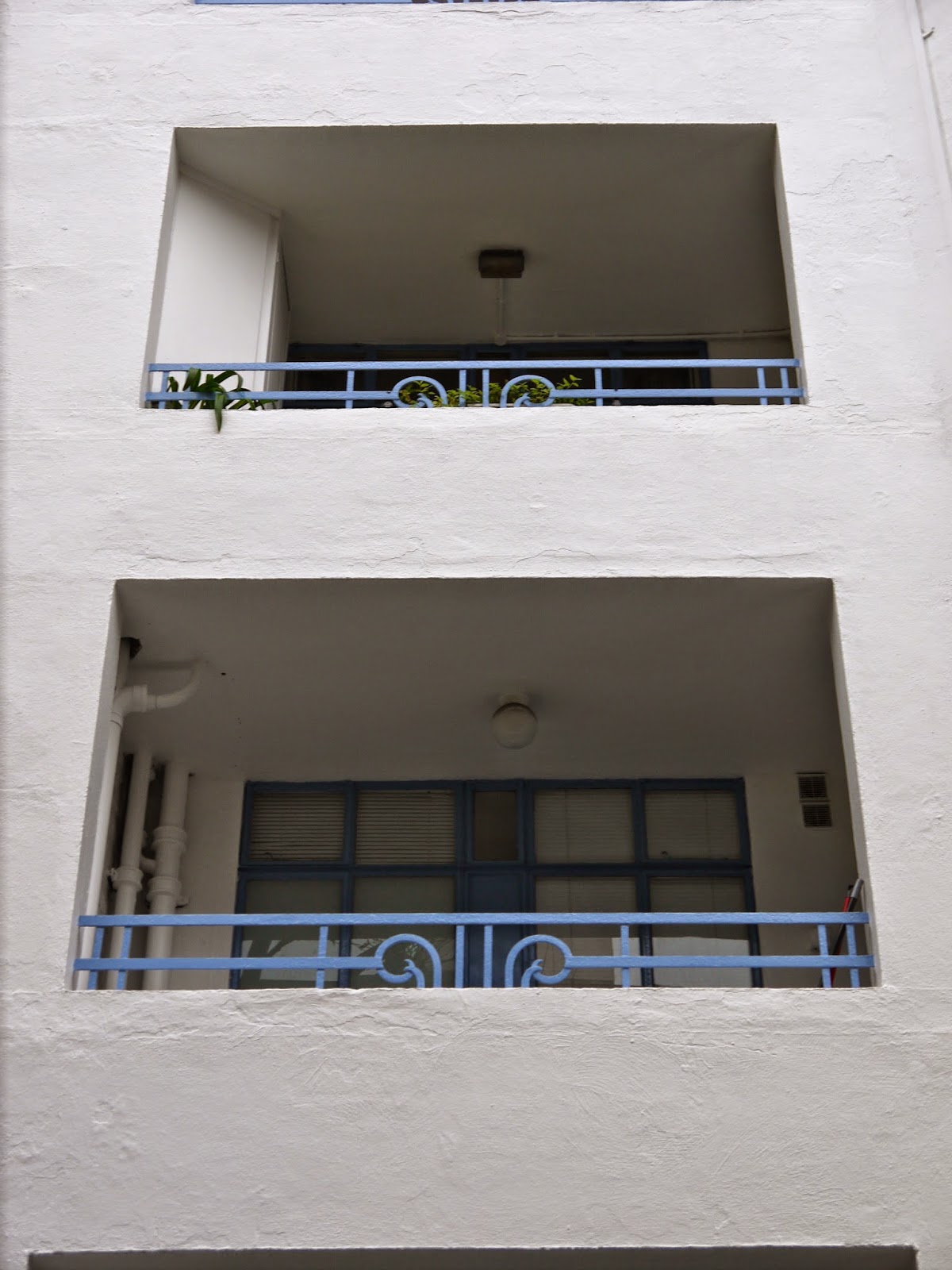 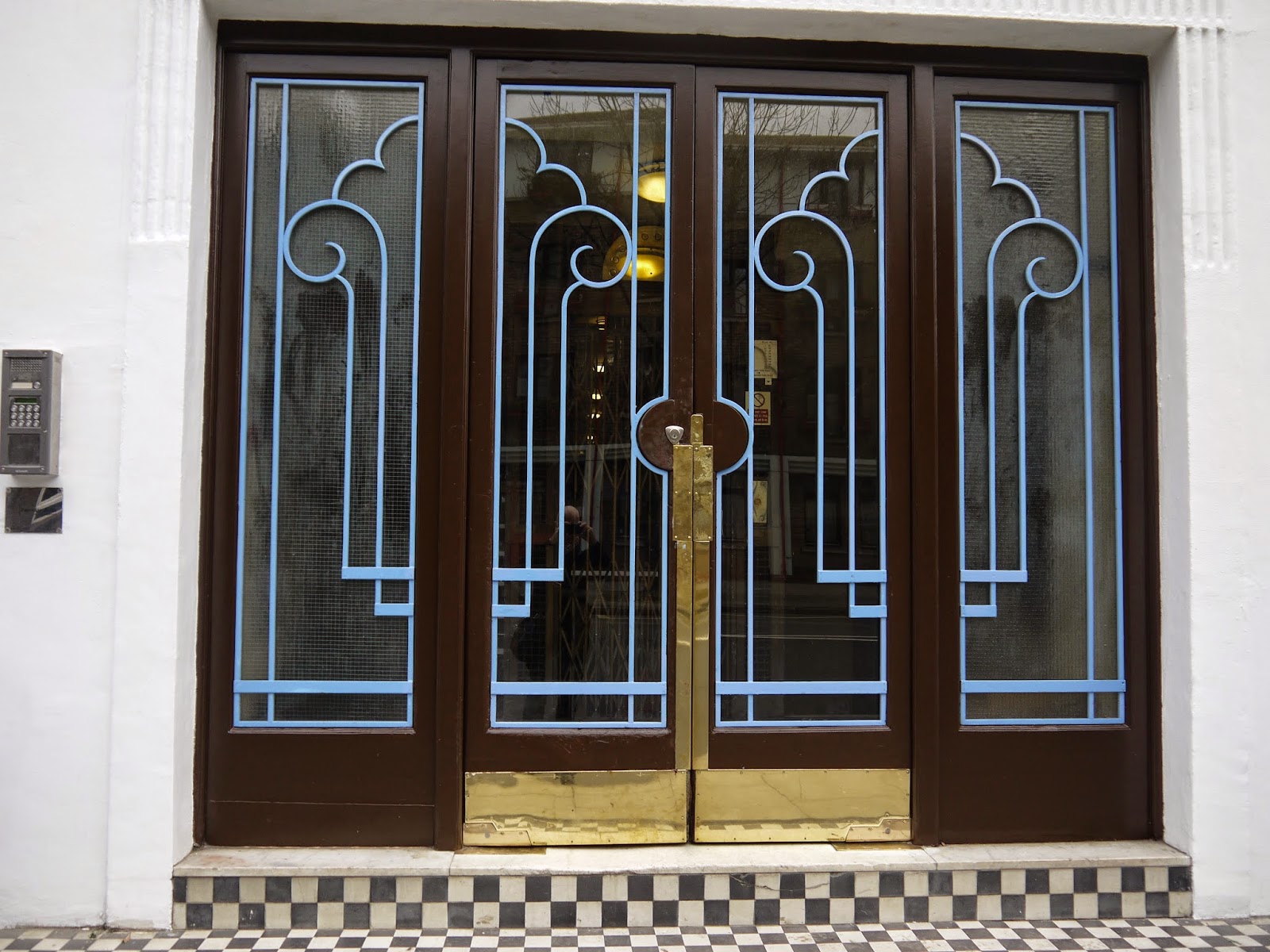 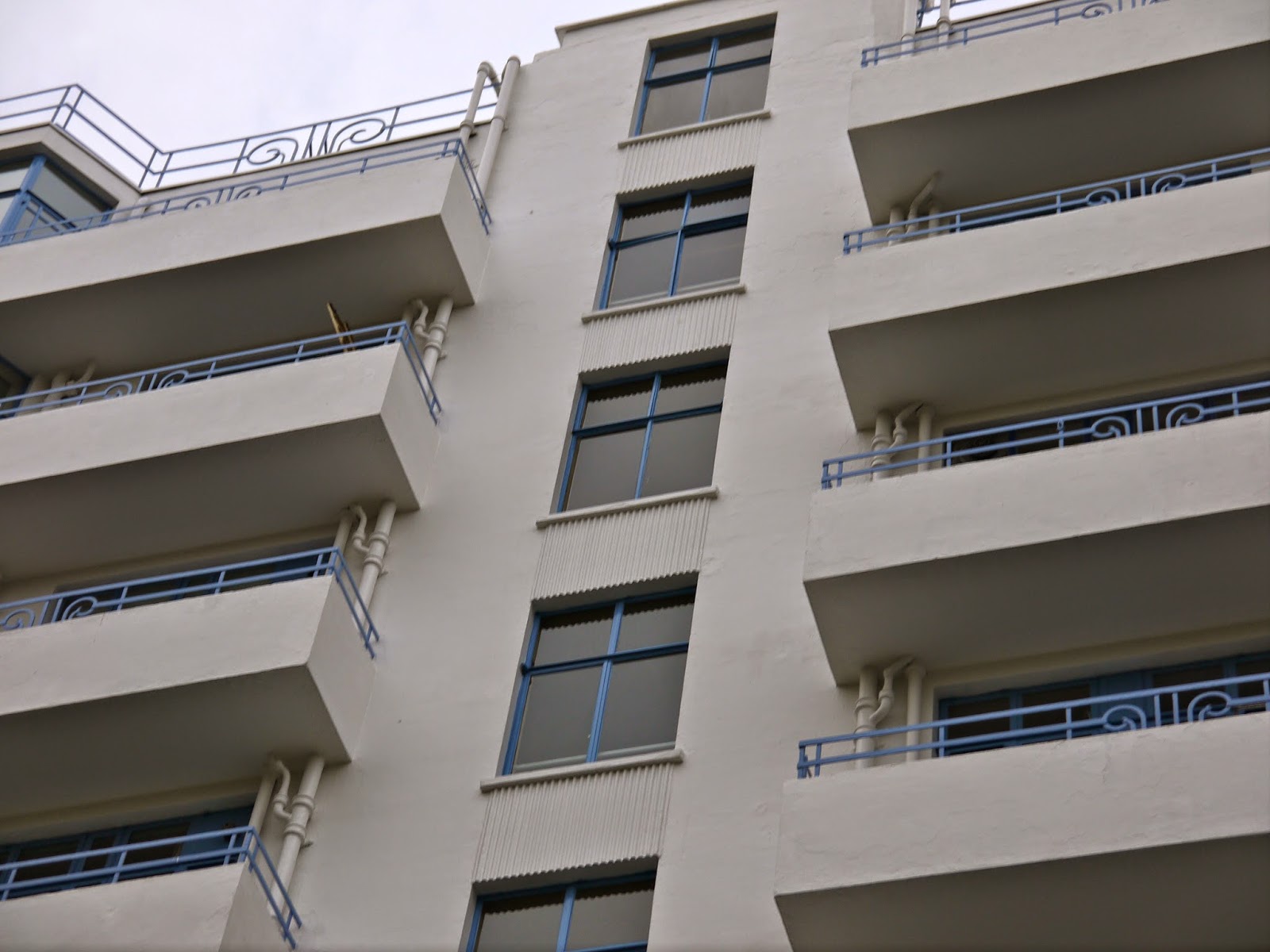