Tel Aviv's Bialik is one of the city's most beautiful and interesting streets. Named for Chaim Nahman Bialik, Israel's national poet, it is home to a number of Bauhaus and Eclectic style buildings. It is also home to the Reuven Rubin Museum whilst the Felicia Blumenthal Music Centre, a small Bauhaus Museum and Tel Aviv's City Museum are located on and around the plaza at the end of the street. Topping the bill in this wonderful collection of history and culture is Beit Bialik the former home of the poet and now a museum.

Nahman was born in 1873 in Brody, a small town near Zhitomir in the Ukraine. He lived in a number of places including Berlin and Odessa before moving to Eretz Israel in 1924 having finally been able to purchase a plot of land in Tel Aviv following the success of his republished collected works in 1923. His arrival was viewed as such an important moment in the development of the city that the Mayor, Meir Dizengoff together with members of the municipal council turned out to greet him.

Whilst in Berlin, Bialik had commissioned architect Joseph Minor to design the house. Minor had studied under Alexander Baerwald and was one of a number of architects progressing a "Hebrew" style combining western building forms with stylistic elements drawn from middle eastern influences including from those known to have been in use in the Jewish kingdoms of Biblical times. This resulted in the spectacular house at number 22 Bialik Street with its tower, domes, outdoor terraces, extensive tile work and arched windows. The house incorporates features for dealing with the middle eastern climate including a flat roof for summer evenings and low set windows to protect against the sun. When  first built the roof terrace would have had clear views across the developing city including a view of the sea, perhaps intended to inspire Bialik's writing.

The beautiful white exterior with its dark wooden window surrounds and doors is surpassed only by the arches, pillars and the stunning primary colours in the interior. This is enhanced by the extensive use of Bezalel ceramics on the floor, pillars and walls and in particular the fireplace which is surrounded with ceramic decoration showing the spies despatched by Moses, priests bearing the Ark of the Covenant and a Menorah, Magen Dovid and arabesques. Stylised palm trees heavy with fruit guard each  side of the fireplace. Continuing the Hebrew theme, the columns of the entrance corridor carry motifs of the twelve tribes of Israel and the signs of the Zodiac. The tiles were designed by another Israeli cultural icon - Ze'ev Raban. All of this is set off against stunning red and blue backgrounds contrasted against white ceilings and upper arches.

In addition to designing the building, Minor also designed the windows, door handles and furniture, taking the total work of art approach popular in Europe and exemplified by Austrian Josef Hoffmann and other artists of the Vienna Secession. The furniture designs were executed by the carpenter Avraham Krinitzky who was later to become mayor of Ramat Gan.

On completion the house soon became the focus of cultural and creative life in Tel Aviv with regular visits from writers, musicians, actors, artists and others from the creative milieu of 1920's Tel Aviv. Some of this was precipitated by Bialik being the president of the Writers Association and also of the Committee for the Hebrew Language. Bialik was viewed as one of the most important figures in the Yishuv - the pre-state Jewish community of Eretz Israel and in addition to his cultural role, was regularly sought out for advice by ordinary citizens of Tel Aviv. This could range from anything from advice on naming a new child to help with obtaining employment. Bialik did not especially welcome this and in an effort to establish some privacy had a sign placed on his door that read "Ch. N. Bialik receives requests at his residence on Mondays and Thursdays only from 5 to 7 in the evening". He even felt it necessary to publish this notice in the newspapers. It appears not to have been effective, as he moved to Ramat Gan in 1933 to find a little peace and a place where he could write without disturbance. Unfortunately he was not to benefit from the move as he died whilst recovering from a gallstones operation in July 1934, having traveled to Vienna to secure treatment.

The Bilaik Street house stood empty until three years after his death, a Bialik Association was formed and assumed responsibility for the restoration of the house and the preservation of the poet's books, papers and general legacy. Restoration work undertaken in the mid 1930's although well intentioned, destroyed the original kitchen and bedroom. The house opened to the public in June 1937 with an archive, library and museum of Bialik's life and works. A number of the organisations that he had worked for or been associated with began to organise their activities from and in the house, thus maintaining its role as a cultural focus for the city. It also attracted tourists and visits from school and kindergarten classes - a tradition that continues until today.

Throughout the 1960's and 70's the house began to deteriorate. The roof began to leak, the plaster peeled, the colours dulled and in the 1960's much of the garden was lost when a new building was erected at the rear of the house. Much of the original furniture had been removed by Bialik's widow - Manya and the upholstery needed replacing on that which remained. In 1984 the municipality of Tel Aviv-Jaffa stepped in with a rescue plan, closed the house and undertook extensive renovation. With costs underwritten by Bank Leumi and the Tel Aviv Foundation, this included returning furniture that had been removed, remaking the wooden shutters that had rotted and restoring much of Bialik's extensive art collection including works by Litvinovsky, Reuben and Glicksberg.

Today, after further works, the house is open for visitors and has been restored to its original glory. It has to be my favourite place in my favourite city with its memories of, and references to, the early years of Tel Aviv when the city (much like today) was at the centre of artistic, social and cultural creativity which included not only Bialik, but other great names in Israeli art and culture including painters Reuven Reubin and Nahman Gutman, actress Chana Robina, writers S. Ansky and Ahad Ha'am, many of whom will have set foot in Beit Bialik.

And some more interior pictures... 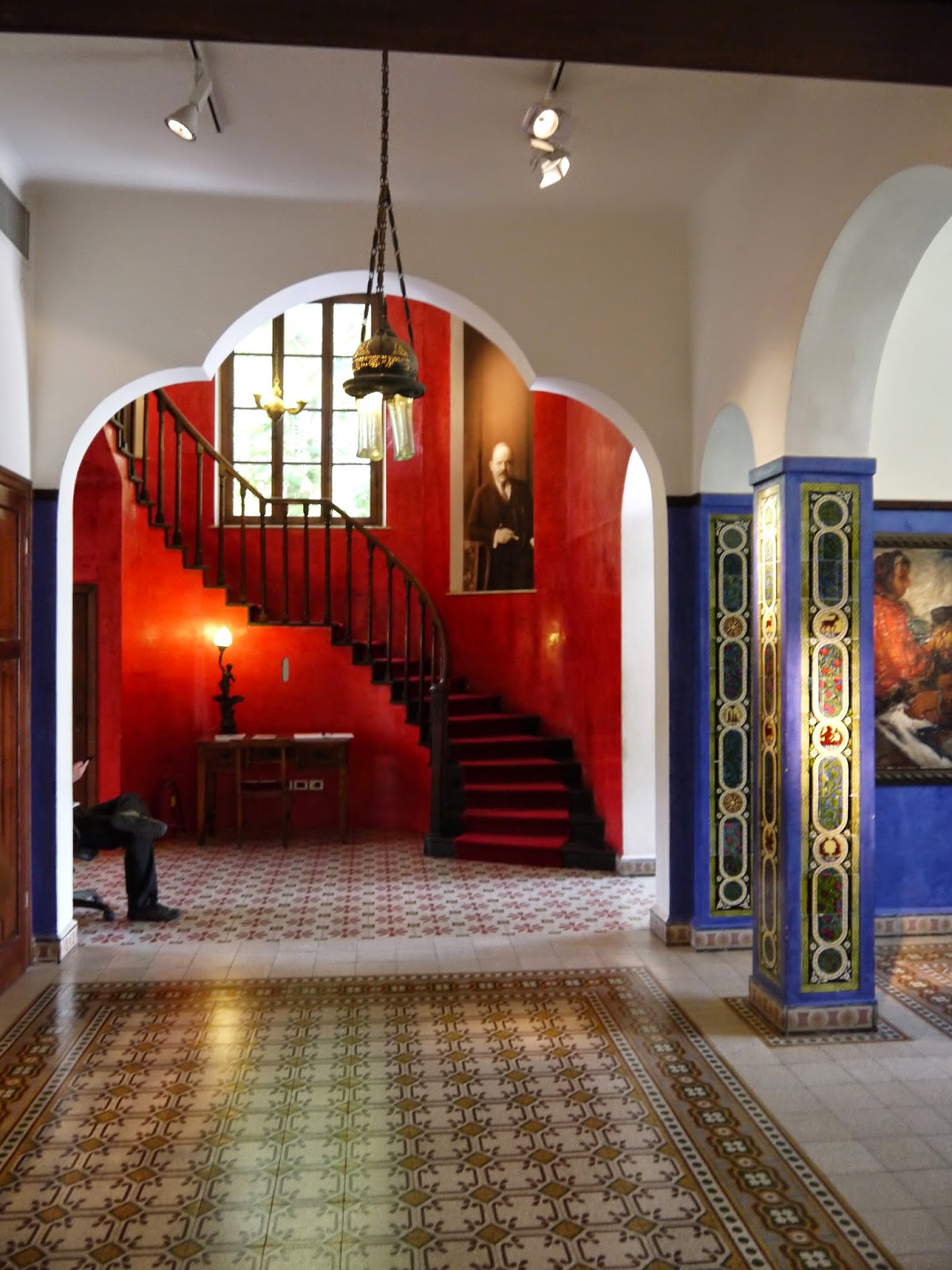 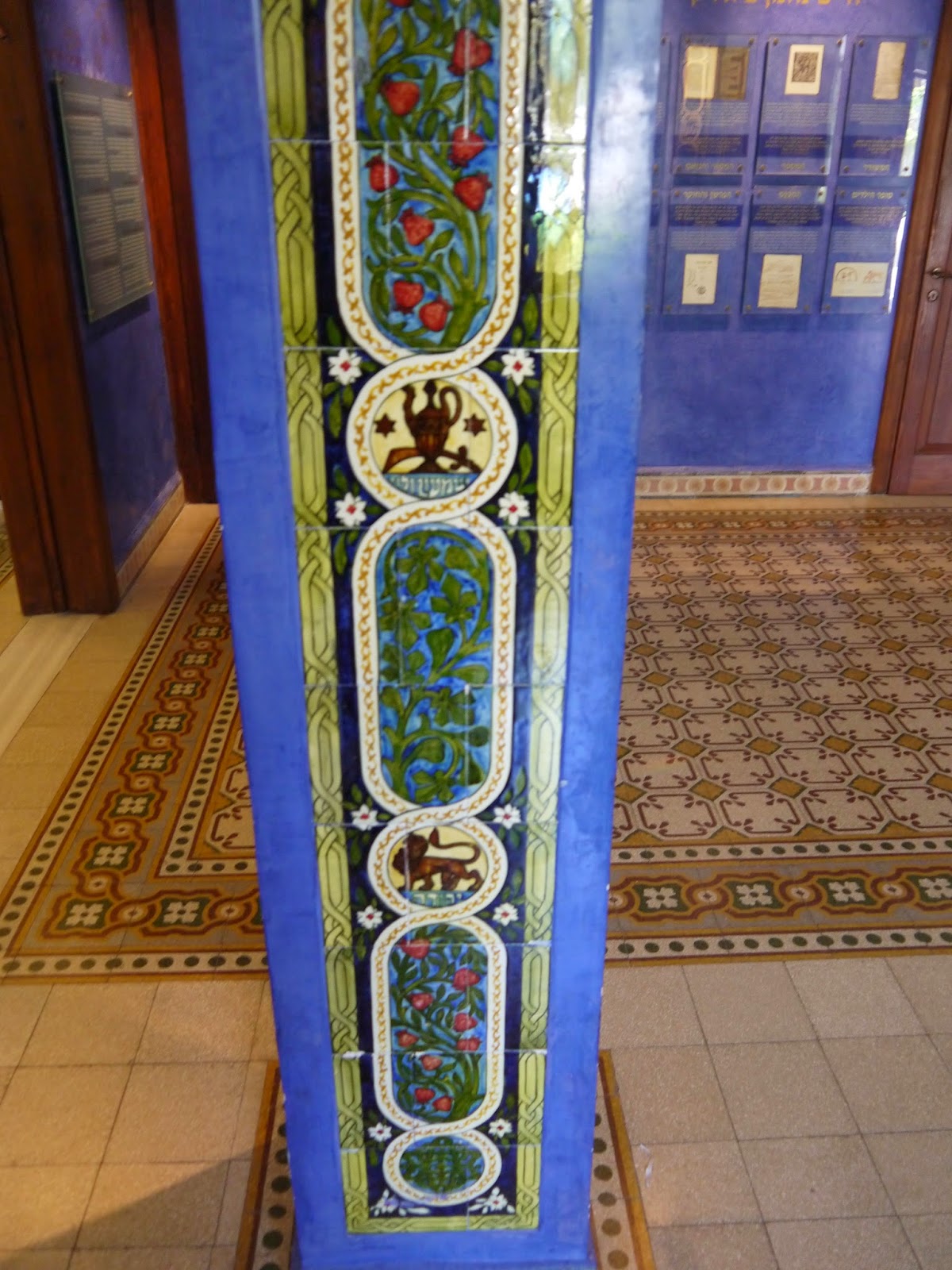 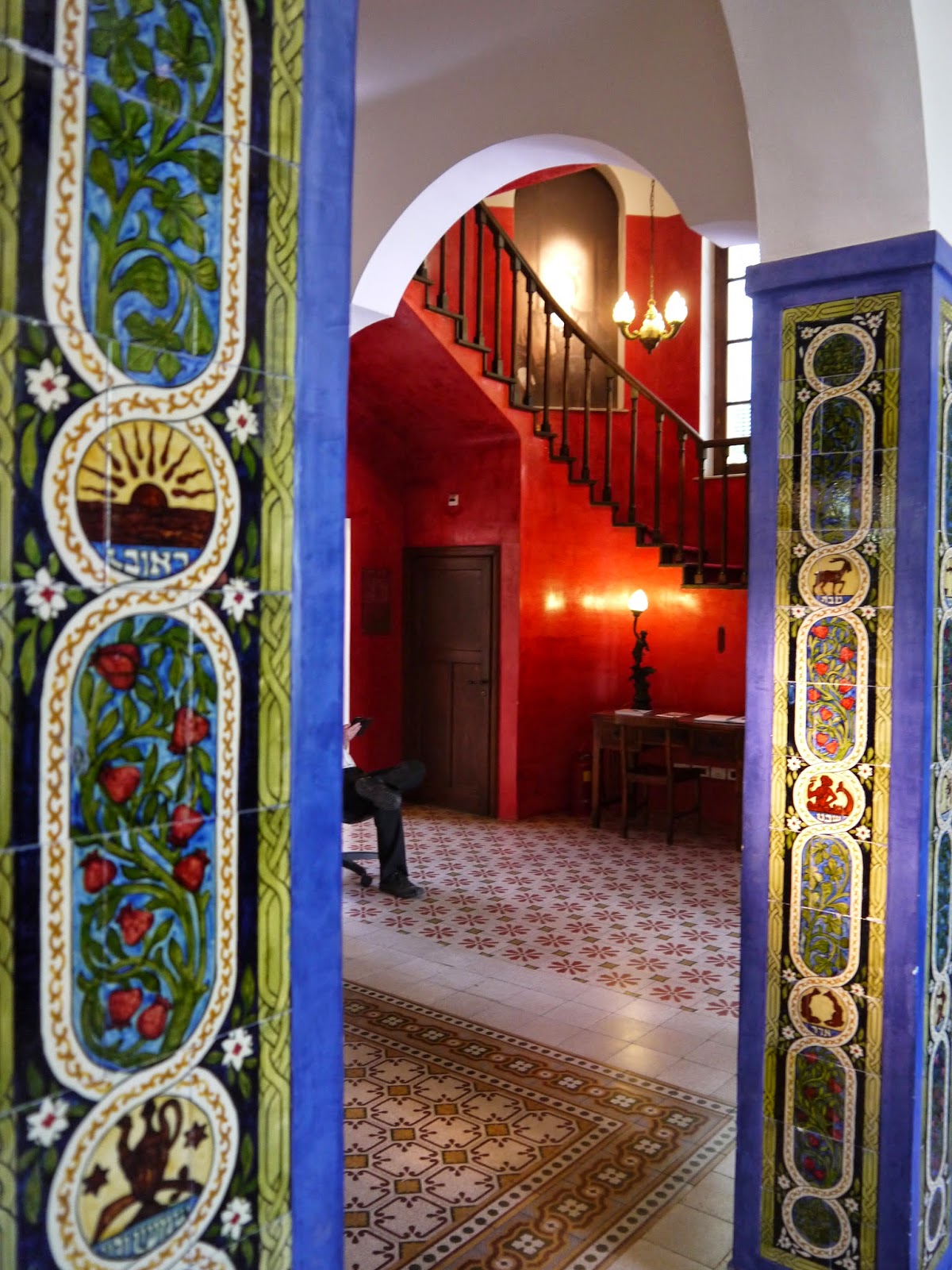 You might also like Architectural treasures in Haifa's Hadar Ha-carmel and Moghrabi Cinema Tel Aviv - memories of the silver screen
Posted by Yekkes at 13:20