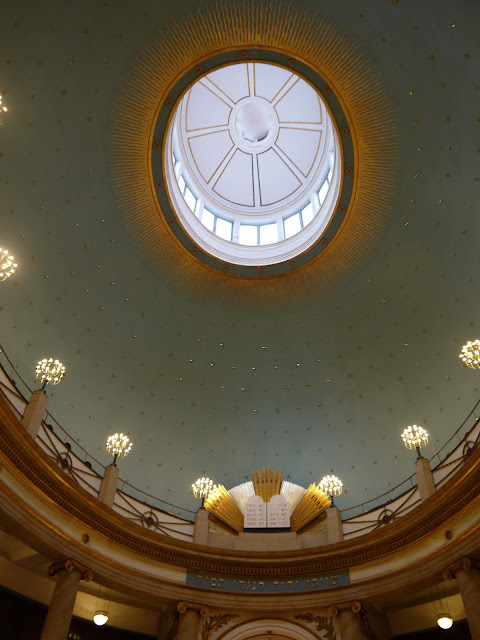 I spent last weekend in Vienna. Whilst checking into my hotel, I heard two other guests speaking Hebrew. Later on I walked along Taborstrasse to reach the centre of the city and heard two market stall holders speaking Hebrew. On my way back to the hotel I noticed a restaurant called "Bahur Tov" which in Hebrew (בהור טוב) means the good fellow.

I stayed in Leopoldstadt, Vienna's second district which was once home to many of the more than 200,000 Jews who lived in the city prior to the 1938 Anschluss or union of Austria and Germany and is now home to many of the city's approximately 15,000 Jews. About half of this number belong to the official community. On the last day of my visit, I took a guided tour of today's Jewish Vienna with tour guide Daniele of Milk and Honey Tours and saw much evidence of a small but thriving community.

Our walk began on Praterstrasse, the main thoroughfare of Leopoldstadt and once home to many cafes and theatres that were frequented by Viennese Jews. Today there are fewer cafes and only one theatre still operating on the Nestroyplatz, halfway down Praterstrasse. The Nestroyhof Theatre (pictured below) carried a banner with the word "Hamakom", Hebrew (המקום) for "the place". Daniele explained that the ground floor of the building had been used as a supermarket that was now closed down. After it closed a beautiful art nouveau theatre was discovered within the building and brought back into use. The theatre had special meaning for Daniele - it was the venue for his wedding! A little further down the adjoining street, at Praterstrasse 25, is the house that Theodor Herzl, father of political Zionism lived in after moving from his native Budapest, until 1882. The house is not open to the public.

Templegasse runs along the side of the Nestroy Theatre and is the site of the former Leopoldstadt Temple. Opened in 1858, the synagogue symbolised the growing confidence of the community which was gradually acquiring civil rights. Unlike other large Jewish buildings it faced directly on to the street and was not hidden behind a wall. Damaged by fire in 1917 it was restored and re-opened in 1921 only to be destroyed again during the Kristallnacht pogrom of November 9th and 10th 1938 which left only the north wing standing. However, Tempelgasse is symbolic of the renewal of Jewish life in Vienna and the site of the former synagogue is now home to the Agudas Israel Talmud Torah school and various community organisations. The school is well attended and as we passed there were many children running, shouting and having fun in the playground. Viennese architect Martin Kohlbauer designed four columns that show the size and extent of the original structure (pictured below) and which act as a memorial to the losses of 1938. There is also a large image of the former Leopoldstadt Temple painted on to the wall of Tempelgasse at the end of the street. Another short walk leads to the Karmeliterplatz, site of the Karmelitermarkt and home to a surprising number of kosher shops and Jewish owned businesses, several of them owned by Israelis. Many of the bakeries, grocery stores and small cafes in the square and surrounding streets are owned by Jews from the former Soviet Union, primarily from Bukhara and Georgia some of whom also have interests in the city's main Naschmarkt in the first district. There are also several small synagogues, unrecognisable as such from the street other than for the police security box that stands outside them. Walking through this part of the city it is not unusual to see Orthodox Jews dressed in Haredi or Hassidic clothing, giving just an idea of how Leopoldstadt must have been before the Second World War. Whilst it is unlikely the community will ever reach pre-war proportions when it accounted for 9 or 10% of the city's population, it is currently being enlarged by a steady trickle of immigrants fro neighbouring Hungary where anti-semitism is again rearing its head with the Jobbik party having a strong presence in government. Leaving Leopoldstadt, it is yet another short walk to the jewel in the crown of Vienna's built Jewish heritage, the Stadttempel in Seitenstettengasse. This was the only synagogue in Vienna to survive Kristallnacht but only due to its proximity to non-Jewish houses and businesses and the attendant risk of fires spreading to them. That's one surviving building from 94. The synagogue has an interesting history. Built in 1826, the then Emperor Franz allowed its construction on the understanding that its facade was not recognisable a place of Jewish worship. Strangely, he also wanted to be able to stand on  the roof of St. Stephen's Cathedral and not see the dome of the synagogue and so the architect Joseph Kornhausel, had to build a special chimney like tower to shield the dome and prevent offence to the Emperor. Kornhausel also built himself an apartment within the tower, accessed by an intricate system of staircases. The apartment is no longer there.

The interior of the synagogue (pictured below) is beautiful. Designed in the Biedermeier style of the time in an oval shape, it has a beautiful blue painted ceiling decorated with golden stars and two women's galleries supported by 12 ionic columns. Daniele told me that the organ is not real. Emperor Joseph demanded an organ be installed and when he visited the synagogue shortly after its opening, a real, smaller organ had to be brought in and played from behind the fake one to sustain the facade. There are regular tours of the synagogue, but visitors must bring their passports and go through rigorous security checks. This began after a palestinian terrorist attack in 1982 that resulted in the murder of two people attending a barmitzvah with a further thirty being injured. Although the Jewish community of Vienna is tentatively renewing itself, the darker past is never very far away. There are many memorials to the Jews killed during the Holocaust, the most well known being the Rachael Whiteread sculpture in Judenplatz  (pictured below) which commemorates the 65,000 Austrian Jews who were unable or unwilling to leave before being deported and murdered. Unveiled in the year 2000, the structure represents an empty room whose doors have no handles and with the outer walls made up of a library of books representing the lives of the lost. The names of the camps to which the victims were deported are engraved on the plinth.


The Judenplatz is a quiet Viennese square with large scale buildings dating back several hundred years. Turning the corner into the square for the first time, the sculpture presents a shock to visitors, immediately taking their attention and interest. The sculpture is not the only tragedy commemorated in this square. There is also a branch of the Jewish museum in the Judenplatz in which it is possible to see below ground, the remains of a medieval synagogue where 200 men and their rabbi committed suicide and set the building on fire rather than undergo forced conversion during a 1421 pogrom. This did not stop many more Jews being burned alive outside of the city and the exclusion of all Jews from Vienna until the seventeenth century. There are several other Holocaust memorials in Vienna, but I was particularly moved by two of the smaller ones. As in Berlin, there is a trail that visitors can follow with small plaques fixed to the ground otuisde of the homes of deportees, listing their names, dates of birth and death (where known) as well as place of deportation. This not only keeps their memories alive, but links them forever to their former homes. Aron Menczer was a young man who helped look after the many Jewish children either orphaned or left to fend for themselves when their parents were deported. Despite having the necessary papers to emigrate to Eretz Israel,  he did not take this opportunity to escape, preferring to remain with his young charges to the end, which eventually came with their deportation to Auschwitz in October 1943 where together with Menczer they were gassed on arrival. His memorial is a simple free standing stone block that stands in Marc Aurel Strasse outside of the former orphanage. Apparently the current owner of the building did not want it fixed to the walls. Simon Weisenthal once had his Holocaust Documentation Centre in the same street. Viennese Jewry has a long and often troubled history. However, it must be remembered that this was the community that gave Austria and the world the genius of Sigmund Freud the pioneer of psychoanalysis, composers Gustav Mahler, Erich Korngold, Arnold Schoenberg and Fritz Kreisler; writers Joseph Roth, Felix Salten and Stefan Zweig, the vocal brilliance of Richard Tauber, architect Josef Frank and countless others whose legacy lives on today. It would be unrealistic to expect what is now a very small community to regain such prominence, but there is again Jewish life in the streets of Vienna and Hebrew can be heard in its streets - not just from the many Israeli tourists who come here to  look for their family history or to enjoy the amazing cultural scene - especially art and music - that Vienna still offers. It doesn't take a great deal to sit in Cafe Central, the favourite coffee house of many of Vienna's most prominent Jews in the 19th and early 20th centuries, to be able to conjure up just what a wonderful community this must have been. Thanks again Daniele!