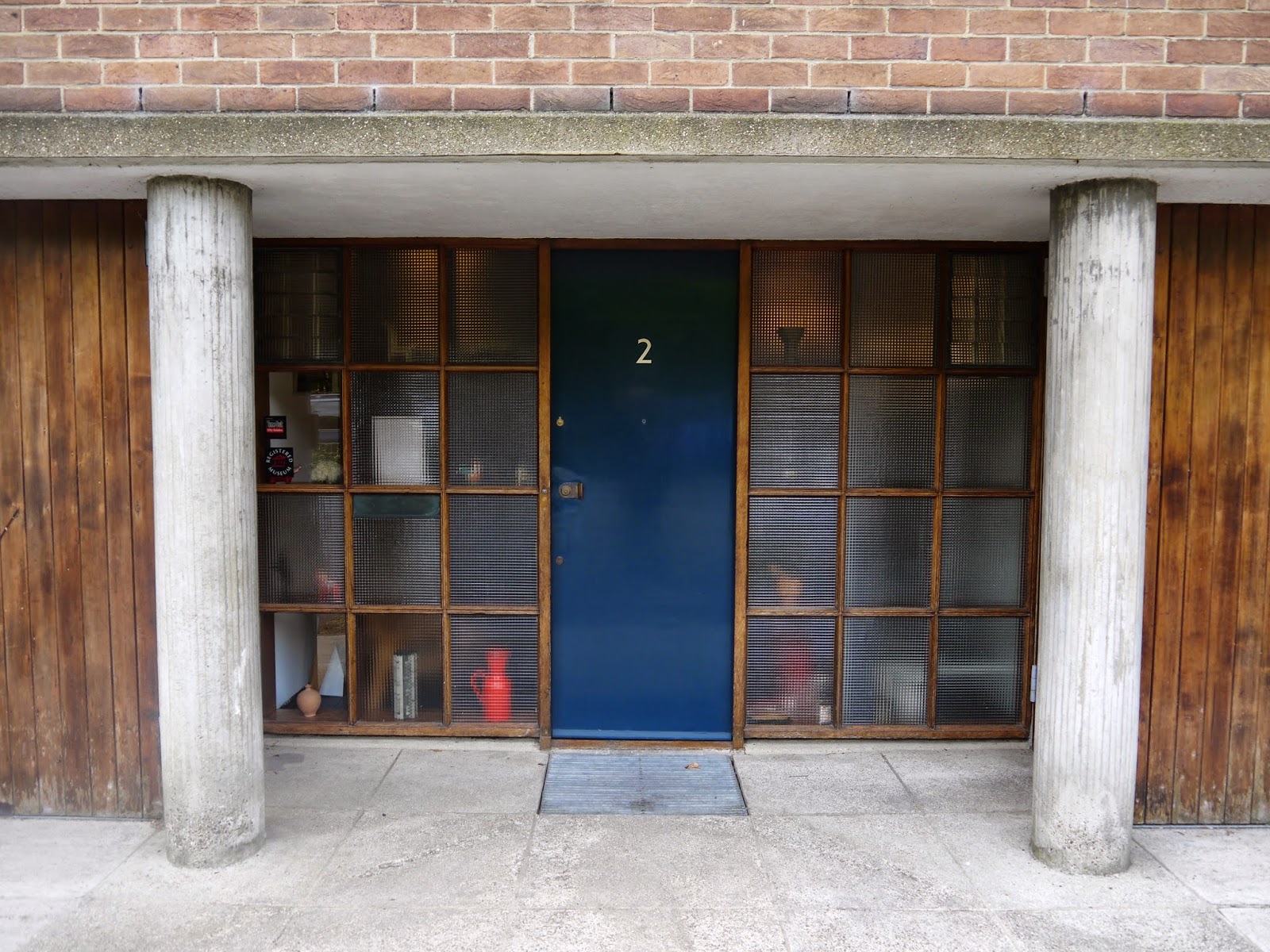 During the 1930's Hampstead became a magnet for progressive artists and writers due (amazingly today!) to the then relatively cheap property prices and the attractions of the Heath. An artists colony developed from the lower parts of Hampstead Village as far as Belsize Park. By the late 1930's, there were even rival factions in the colony with the Surrealists and the Abstractionists following different manifestos, despite both being politically left-wing.

This creative milieu was joined by many refugees from Germany, Austria and other parts of central Europe as the European mainland became increasingly uncomfortable for  Jews, left-wingers and progressive artists and intellectuals. Architect Erno Goldfinger had come to London from Paris in 1934 and together with his British born wife and young son moved into a flat in the iconic High Point 1 apartment building in Highgate. High Point was designed by Berthold Lubetkin, who like Goldfinger was an Eastern European Jew - Goldfinger having been born in Budapest and Lubetkin in Tbilisi (now Georgia, formerly the Soviet Union) - and a professional rival.

Goldfinger wanted to build a house for his wife and family and acquired a piece of land in Willow Road, occupied by four small cottages built partly below the level of the road. His proposal was to demolish these buildings and to construct a modernist home for his family as part of a block of flats, but his detailed designs were rejected by the Council and he had to re-think his project. The final design included three properties (as today), the largest being the Goldfinger family home in the centre (number 2), flanked by smaller properties that were to be sold to finance the construction.

Again his designs met with opposition. The then Hampstead Borough Council demanded a greater proportion of wall to window than he intended for the central feature windows at the front of the house. As if this wasn't enough, one Henry Brooke, secretary of the Heath and Old Hampstead Protection Society wrote a letter to the local press that sparked controversy and ran for several weeks before Goldfinger finally secured the necessary approvals. Numbers 1-3 Willow Road were finally completed in summer 1939, just a short time before the outbreak of war in September of that year. The much longed for family home was short lived as the by then two Goldfinger children, were evacuated to Canada - although they did return towards the end of the war.

So what of the house? Many of its original features have been retained by the National Trust who now have care of the property. The ground floor lobby gives immediately on to a spiral staircase leading to the upper floors. The staircase is narrow but captures light from a skylight which together with the lobby lamps makes interesting shapes and patterns on the walls that must change throughout the course of the day. The balustrade is made of rope and Peter Goldfinger, the architect's son remembers it being re-tensioned every two or three years. Speaking of interesting shapes, the glass walls at the entrance are frosted - that's a good thing as they afford views of guests using the ground floor toilet!

The first floor is perhaps the most interesting space. It is extremely flexible and can either be a single large space or three separate rooms by virtue of a series of sliding doors. The short film that visitors see before touring the house makes reference to the glittering parties that the family held here over many years and which were attended by artists, writers, architects and other leading cultural figures of the day. Much of the furniture was designed by Goldfinger who also collected sculpture, painting and various objets d'art. The family art collection is impressive and includes works by Marx Ernst, Fernand Leger, Marcel Duchamp and Henry Moore. Like many intellectuals of their time, the Goldfingers were pro-Soviet and in 1942 staged an art exhibition in their home, the proceeds of which were donated to the Soviet war effort. Also like many left wing intellectuals of their time, they were what might be termed "champagne socialists" keeping servants to help run the house. 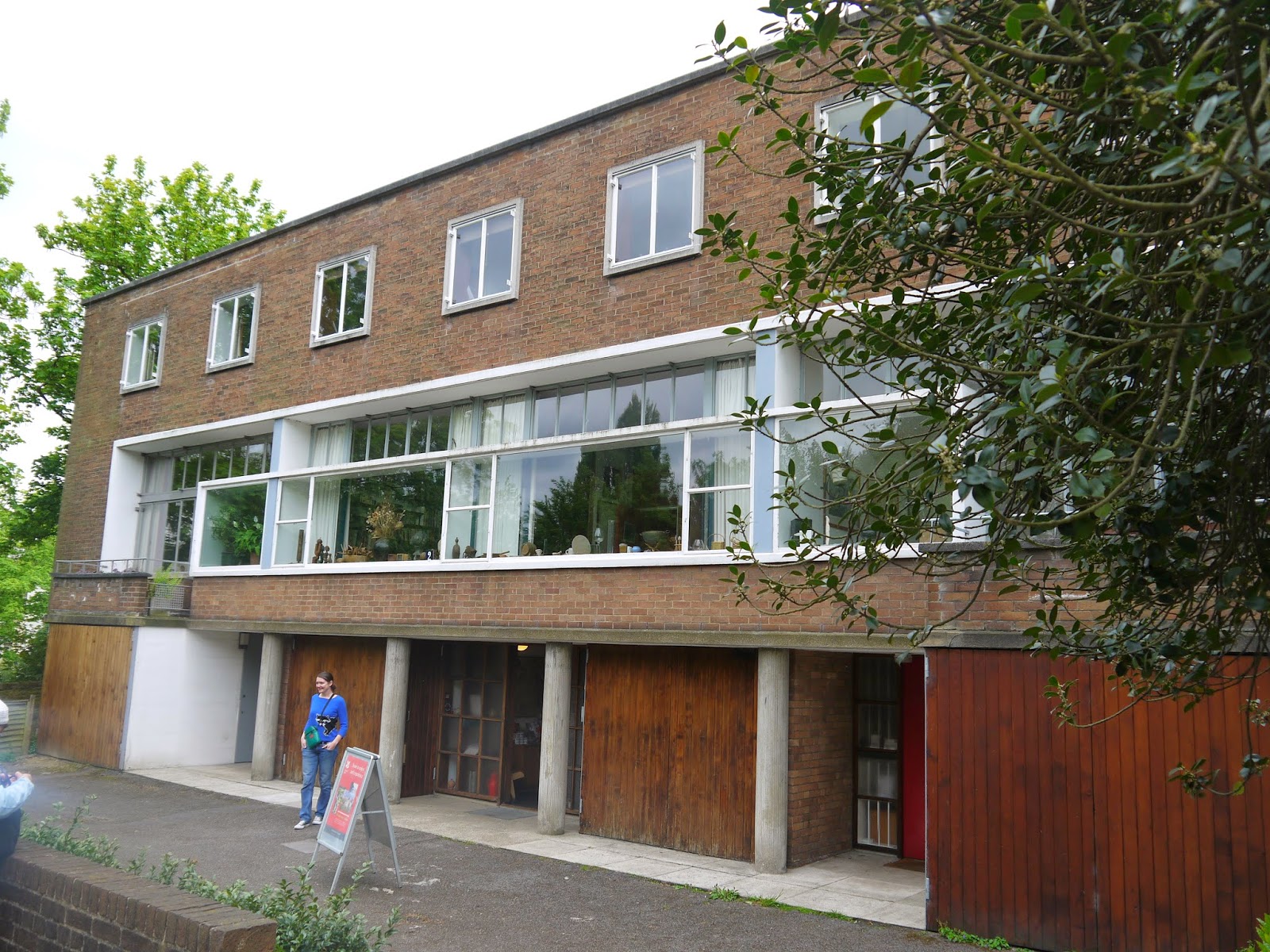 Still on the first floor, the spaces include a dining area, a room once used as a studio by Ursula, Erno's wife and a member of the Blackwell family (as in Cross and Blackwell - the soup people) and a sitting room at the rear of the floor. The studio is particularly fascinating, with a platform lit for posing and a collection of Erno's magazines, books and some of his professional papers. It seems that over time, the room became less of an artist's studio and more of a home working space for our man. The lounge is a fantastic space with a white painted convex screen wall, which supports a decorative cast-iron fire back held in a dark steel frame. There is also a green marble hearthstone which is flush with the parquet flooring. Just beautiful.  This room includes one of the quirkier pieces of art - a circulating spiral decorated, blue and white disc by Marcel Duchamp. It is operated from a wall switch and must have been extremely technologically advanced for its time. I looked at it for all of thirty seconds before feeling dizzy. I can imagine viewers becoming hypnotised by its never ending spiral!

There are books everywhere at 2 Willow Road. There are books on art, science, history, cookery and just about anything you could think of. There are also many works of fiction, which brings us to the "other" Goldfinger, known to fans of James Bond films and novels. Goldfinger had a reputation for being almost impossible to work with. Many employees parted company with him after very short periods of time - weeks for some, days for others due to what appears to have been a somewhat over-bearing personality, unable to tolerate dissent, disagreement or mistakes. However, there are also stories about him displaying unsolicited acts of generosity and of being able to accept a different point of view - so long as he could claim it as his own afterwards! For some reason, Ian Fleming, writer of the James Bond novels did not like Goldfinger and used the name for one of his "baddies". Erno Goldfinger was an extremely tall man but the film of the book cast an extremely small actor Gert Frobe in the role. The book describes the villain as a complete megalomaniac and an utterly obnoxious individual. Erno considered suing, but was advised against it by friends. The reasons for Fleming's depiction of Goldfinger are not clear, however he was openly anti-semitic, so who knows if this was a consideration?

Back to the house. The upper floor is where the five bedrooms are. These are fairly spartan spaces, not especially large and with only minimal furniture. The back three rooms are currently set out as a single room. This space was once the nursery, divided into three with the nanny's tiny room in the middle and her two charges in he rooms on each side of her. In later years, Erno's mother, Regina, moved into this space bringing her heavy Austro-Hungarian style furniture with her. I wonder what he thought of that! These rear rooms look over a large and beautiful garden that was once home (for more than 20 years) to a Henry Moore sculpture, left there by a family friend who eventually took it back to sell it!

The main bedroom has built in cupboards, again, extremely modern for the 1930's, one of which is not a cupboard, but a door into a rather roomy and stylish en-suite bathroom which contains a number of small items in 1930's packaging - a nice touch. There is also an enormous wash-basin hidden in a cupboard in the very spartan guest room and a second bathroom on this floor.

Goldfinger has a mixed legacy. The Willow Road house is acknowledged as a significant modernist building, but he achieved notoriety for the design of two enormous social housing projects for the former Greater London Council, Trellick Tower in North Kensington and Balfron Tower in the east end. Much criticised in later years, Goldfinger truly believed in his designs, going so far as to move his family into a flat on the 27th and top floor of Balfron Tower for a couple of months in 1967. He also designed the monolithic Alexander Fleming House for the Ministry of Health at the Elephant and Castle. Following many problems in the 1970's and 1980's, all three of these buildings have had major works completed and are being sold off at huge prices. Alexander Fleming House is now a residential development known as Metro Central Heights with substantial prices being paid for flats there whilst in January this year a flat on the 31st and top floor of Trellick Tower was sold for more than 330, 000 pounds!

In fairness, Goldfinger's career was interrupted by the war. When building began again in the 1950's he was competing with younger, homegrown architects and found it hard to gain commissions. However 2
Willow Road remains a real treasure of British modernist architecture and perhaps opinion on his larger, later works will change as their value increases.
Posted by Yekkes at 23:29