A couple of years ago I bought a great little book called London Art Deco, by Arnold Schwartzman. Since then I have been planning to visit several of the buildings covered in the book and last week I finally managed to organise myself enough to make a start.

I have always been a fan of the London Underground - "the tube" and decided I would start by visiting some of the wonderful art deco influenced stations built during a great surge in the network's development in the 1930's. This meant starting with a long journey from my home in East London to Southgate, just three stops from the very northern most station on the Piccadilly Line.  Southgate is one of a number of stations designed in the 1930's by the great Charles Holden. Working under the leadership of Frank Pick, the visionary commercial manager of the then London Electric Railway Company and inspired by the red brick designs of the Dutch architect Willem Marinus Dudok. Southgate station, opened in 1933, is one of Holden's proudest achievements. Built in the art deco/ streamline moderne style, the station building is circular with a flat projecting concrete roof. Perhaps the most outstanding external feature of the station is located on the roof - an illuminated feature resembling a tesla coil. Despite the loss of one of the three original entrances to accommodate a modern ticket office, the station retains its 1930's feel with a beautifully up-lit escalator and ceramic tiled lower hall. The station has been used to film numerous period dramas including scenes from the 1999 film adaptation of Graham Green's "The End of the Affair". It took about an hour to reach Southgate from home, and I arrived a little thirsty. I was very happy to find a small cafe opposite the station serving great coffee, home made cookies and cakes as well as soups, salads and other light meals. Friendly staff and free wi-fi made this a great little find. The Harris and Hoole cafe is one of a small chain of cafes across north London.

Suitably refreshed I jumped back on the tube to travel just one stop south to Arnos Grove, another of Holden's stations. Built from 1932-33, the dominating feature of this station is the central red brick "drum" which gives an almost monumental height to the ticket hall. The drum is said to have been inspired by Swedish architect, Gunnar Asplund's design for the Stockholm City Library built from 1920 to 1928. I was able to visit the Stockholm library a few years ago, for work reasons, and can see a clear likeness. The ticket hall is lit by a number of high level windows and there are some art deco features inside the station - the up-lights on the bridge between platforms and the bannisters from the bridge to the track side. Someone needs to give those lights a bit of a clean. Back on the tube again for one more stop south, getting off at Bounds Green Station, designed by C.H. James, a colleague of Holden, and opened in September 1932. The station has a few interesting features, including an (inaccurate) plaque remembering the 17 people killed in 1940 when the station was hit during a German bombing raid. From Bounds Green I took a short bus ride to my favourite London Underground station - East Finchley on the Northern Line. East Finchley opened in 1939, and is another Holden designed structure. I like this station for a number of reasons. I love the curving, narrow, white painted waiting rooms on the platforms (pictured above), referencing the often used nautical theme of art deco architecture. These buildings would not look out of place in Tel Aviv or even Eritrea! I also like the semi-circular glazed stairways leading to the enclosed bridge over the tracks where the station offices are located. East Finchley station is well known for it's 10 foot tall sculpture of a kneeling archer, executed by Eric Aumonier and visible from the main road as well as from the end of the south bound platform. Known affectionately to locals as "Archie", he is said to commemorate Finchley's historical association with hunting in the nearby Royal Forest of Enfield, whilst I am also advised that there was once a sculpted arrow at Morden Station - the southernmost end of the Northern Line - courtesy of Archie. East Finchley's Phoenix Cinema is just across the road from the station and has some art deco features - mainly in the auditorium which features attractive freezes 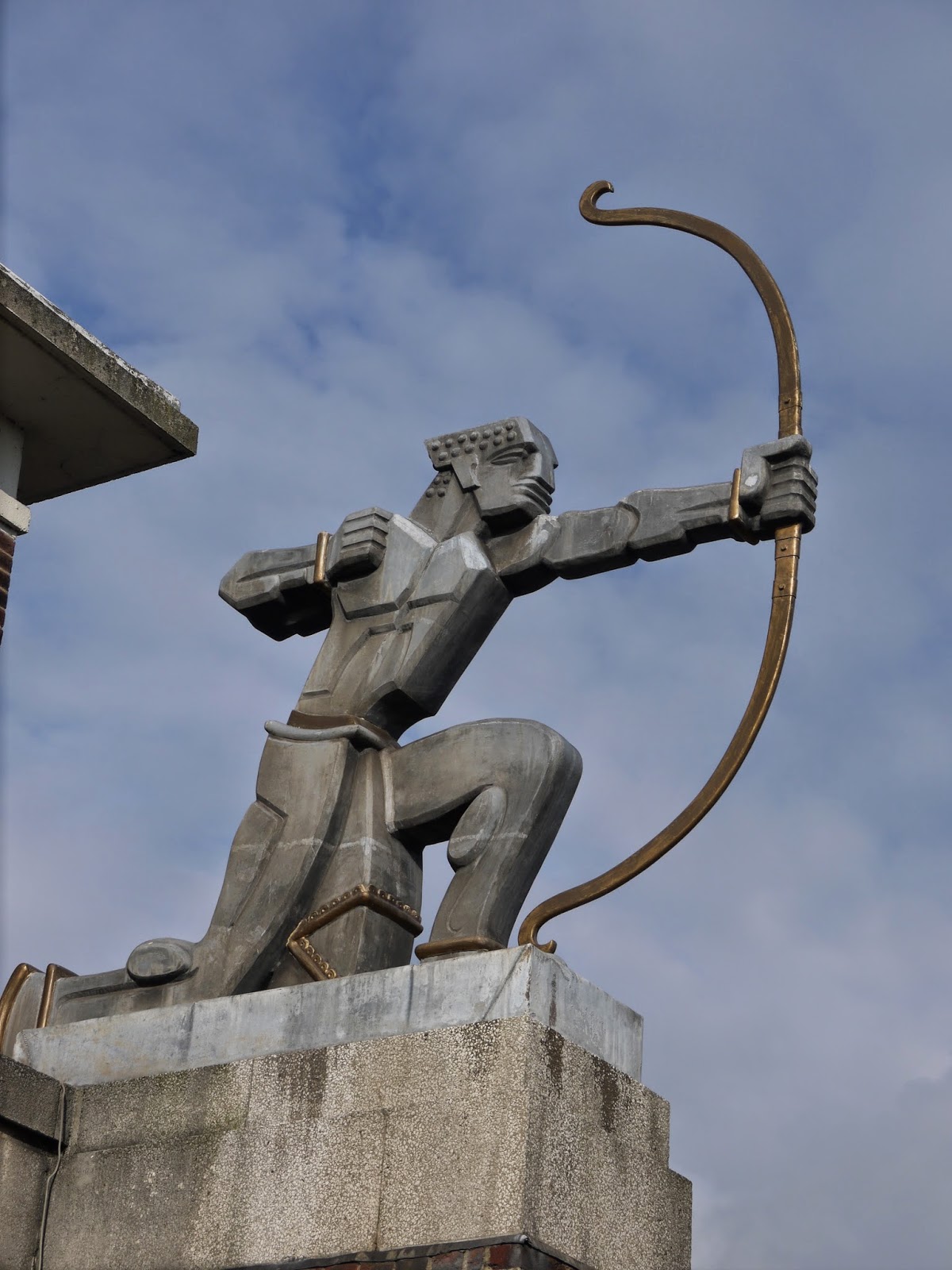 From East Finchley, I again headed south on the Northern Line to Mornington Crescent in Camden to view the stunning former Carreras cigarette factory, now the Greater London House. Built from 1926 - 1928 (and originally known as the Arcadia works) for the Russian Jewish inventor and philanthropist, Bernhard Baron, the building was designed by M.E. and O.H. Collins and A.G.Porri. It is a very large building - 168 metres long and dominates this part of Hampstead Road. Best known for its two black cats that stand guard over the main entrance, the Carreras building was once home to the Black Cat cigarette factory, it also sports beautiful and brightly coloured painted details - including giant leaves at the base of the front columns and the faces of a row of black cats at the upper level. All of this is set against a striking white background.

The original design included a solar disc to the Egyptian Sun god - Ra but when the factory was converted into offices in 1961, this and several other features, were lost. A renovation in the 1990's restored much of the detail and the two current (replica) black cats appeared. The original Egyptian theme was inspired by the uncovering of Tutenkhamun's tomb in 1922 leading to a demand for this style which was played out in Hollywood movies set in ancient Egypt and demonstrated at the Paris Exhibition of 1925. The architects also drew inspiration from some of the treasures held in the British Museum, whilst commercially, the cigarette company used the imagery to imply luxury in their advertising. This was born out by the somewhat outrageous opening of the building which apparently included covering the pavement in front of the building with sand to resemble the Egyptian desert, a procession of the then cast of a production of Aida around a temple structure - in full costume of course, and get this, a chariot race on Hampstead Road! From Mornington Crescent to Oxford Circus is a short tube journey and I was soon in the heart of the west end, where there are also some art deco treasures. Turning left from the Argyle Street exit and walking towards Liberty's department store, Palladium House (pictured below) is situated on the junction of Argyle Street and Great Marlbrough Street. (Incidentally, Liberty is also worth a quick look - there are some interesting features from the 1930's still to be found if you look hard enough - and there are often items of furniture from this period on sale on the top floor!).

At first glance this looks like a very simple, if very shiny, black building. In London we say one should "look up" to see the interesting things and this building is an example of that. The shiny black granite cladding is topped with persian style enamel on bronze decoration produced by the Birmingham Guild of Handicraft. Built in 1928 and originally called Ideal House, National Radiator Building it is the work of architect Raymond M. Hood with additions from Gordon Jeeves in 1933. It was modelled on the American Radiator Building in Bryant Park, Manhattan whilst the colours - black and gold - were the colours of the company.

The ground floor is now home to Garfunkels, a spectacularly uninspiring chain restaurant, but look above the windows and the entrance on Great Marlborough Street for the easier to see decoration. The black cladding led to the building being referred to as the "Moor of Argyle Street" in its early days. Walking back up to and along Oxford Street towards Bond Street, there is a small side passage called Woodstock Street. Looking straight down from the main road there is a vision of loveliness in the shape of the Bonhams building, also known as Blenstock House (pictured below).  It features a curved stair tower to the left and a three bay elevation set back to the right. This beauty was built in 1937, designed by architects Fuller, Hall and Foulsham. These three also designed the extremely modern looking building  - Ibex House in the Minories near Tower Hill, which I have pencilled in for another day.

Blenstock House takes its name from fusing the names of the two streets it straddles - Blenheim and Woodstock. It was originally the home of Phillips auctioneers, which was bought out by Bonhams in 2001. The original tenants also included Berker Sportcraft Limited - a sportswear manufacturers, who were succeeded by a variety of other tenants until Phillips took over the entire building in 1974. This lovely building doesn't feature in my little book by Mister Schwartzman and when asking friends about it, few could picture it - but its one of my favourites. It was beginning to grow cold at this point and rain looked a distinct possibility, but I couldn't resist a little look at one of the west end's loveliest sights - the fabulous clock that stands guard over the main doors to Selfridges (pictured below), just a bit further on from Bonhams. Selfridges is a great weakness of mine - clothes, cafes and several floors of temptation, but I resisted going in and instead finished my tour with a photograph of the clock. The store opened in 1909 thanks to the American millionaire entrepreneur, Gordon Selfridge so it was a bit early perhaps for art deco - but the Queen of Time riding in the ship of commerce designed by British artist Gilbert Bayes has some definite deco features. And anyway, its just great.

Sometimes I forget that you can also be a tourist in your own city. Big thanks to Mr Schwartzman for his book - and more plans being hatched for further tours - there's lots more to see yet!