A friend of mine once told me she could never bear to visit Russia because of its terrible history - the suffering, the death, the cruelty that Russians have endured for centuries. I take a different view. Yes, there has been immense suffering here, but the Russians have created some of the world's most beautiful works of art, literature, drama, music and architecture despite this. I have recently begun reading more 20th century Russian literature (in English of course) and have just completed Vasily Grossman's Life and Fate, an 855 pages epic set around the siege of Stalingrad in the Second World War. This book illustrates perfectly the terrible suffering that my friend spoke about but also reminds the reader of the tremendous achievements of the Russians in the face of the most terrible adversity.

Although the central "event" of the book is the battle of Stalingrad, this is not a military history. Instead, Life and Fate introduces us to a wide range of characters and shows the waxing and waning of their fortunes over the period of the siege. The characters range from senior military characters (both Russian and German), to scientists involved in research to support the Russian war effort, to prisoners in the Gulag and in the German camps and to peasants and intellectuals all caught up in the horrors of the War. Many of the characters are members of, or linked to the Shaposhnikov family.

Grossman writes eloquently, not about tactical issues of warfare, but about the lives of his characters during this period. The battle is raging, but the cast still have romantic affairs, have children, read books, play the piano, denounce their colleagues, drink vodka and indulge in all of the petty jealousies of "normal" life everywhere. Grossman is particularly adept at capturing the underlying tension and fear in Soviet life - the continuous fear that no matter how bright one's star may be today, a careless remark or badly judged comment can land you in Lubyanka or worse tomorrow.

Stalin and Hitler make cameo style appearances - interestingly drawn as almost human with personal fears and concerns of their own. Hitler is seen walking in a forest and being afraid of the shadows, whilst Stalin is said to b worried about his appearance. Most interestingly, given the time the book was written, Grossman is openly critical of the regime and of Stalin, using his characters to criticise the appalling events of 1937 with the series of show trials and executions that removed the revolutionary generation of Bukharin, Radek and others. One of the main characters - Victor Shtrum, is required to fill in a questionnaire as part of a Communist Party investigation into his "activities". The questionnaire includes detailed investigation of his ethnic and social origins, those of his wife and also of his parents and other family members. He knows that identifying his ethnicity as being Jewish will disadvantage him. He is worried that some of his family are or were petty bourgeois and knows that this will disadvantage him. Some of his family moved abroad during the Tsarist period and have remained overseas. He nows that this will also disadvantage him. Grossman's point surely was to draw out the similarities between the Hitler and Stalin regimes, both of which were virulently anti-semitic and both of which made judgements about people based on their family history, network and ethnicity.

Grossman takes an "episodic" approach to the story - moving from one set of characters to another to keep us updated with the progression of the various stories running through the book. There are incredible acts of kindness and bravery - Sofya Levinton gives up the chance to avoid the gas chambers when doctors are asked to step forward (we are told early on that she is a highly thought of doctor), in order to stay with a small boy who has been separated from his parents. She knows that she will be earmarked for death but chooses to look after the child. This particular story includes a description of the gassing of Jews inside one of the camps from the point of view of the victims. It is impossible to know how to write about this.

There are other appalling acts of horror and random violence including the description of the torture of prisoners in Lubyanka. Some of Grossman's best writing comes near the end of the book with the astonishing scenes that accompany the eventual surrender of the German forces to the Russians as people make a range of behavioural choices that will stay with them forever. More than anything, Life and Fate is a stunning expose of life within a totalitarian regime where you can be shot for not having the appropriate permission to be in a particular city at a particular time, where despite the waging of the most horrifying war ever, there is still time for political commissars to question soldiers (and citizens) to establish their socialist orthodoxy and to ensure those who do not pass muster face the consequences.

Author Vasily Grossman was born in the Ukraine in 1905 and was both a writer and journalist. He worked as a war correspondent for the Red Army newspaper, Krasnaya Zvedz, in the Second World War and wrote firsthand accounts of the battles of Moscow, Stalingrad, Kursk and Berlin. He also wrote eyewitness accounts of the German extermination camps following liberation. Shaken by Stalin's move to overt anti-semitism after the war, his two major works - Life and Fate and Everything Flows were censored during the Krushchev period (Stalin died in 1953) and were classified as anti-soviet. Although he was never arrested, the KGB undertook a number of raids on his home - confiscating manuscripts, notes and even the typewriter ribbon on which Life and Fate had been written! Communist party ideologue, Mikhail Suslov said the book could be published - but perhaps in 200 years time! Grossman didn't live to see his work published, dying from stomach cancer in 1964 but copies were smuggled out by Soviet dissidents including Andrei Sakharov. The book was eventually published in Russia in 1988 - just before the fall of the regime he had criticised so much. 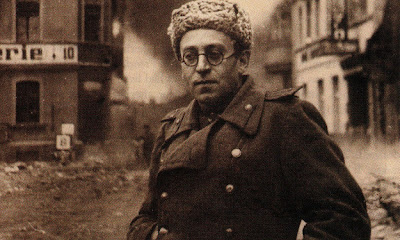 Life and Fate is a long and challenging journey, but one well worth taking. The Vintage Orange Inheritance edition is extremely readable and there is a helpful list of characters at the back of the book in case you forget anyone between episodes. It might also be worth a quick read up on Russian naming systems before undertaking the book in earnest - some characters are referred to by their patronyms whilst others may (also) be referred to by a range of diminutives!

I know now what my friend feels about the horror of history in this part of the world, but Grossman's work bears out my point about the incredible creativity of the Russians - much of it coming from this shocking experience.