I had never been to the former Yugoslavia before a recent short trip to Sarajevo. There are no direct flights from London, so I spent an hour at Zagreb airport waiting for a connection. Technically I've now visited two of the former constituent states of Yugoslavia, but I'm not counting an hour in an airport as a real visit to Croatia, even if I spent another one on the way back.

Sarajevo is a city with a big history. Invasions or annexations by Turks and Austrians. Occupation by Germans. A narrow escape from Stalinist domination due to former leader Tito (who is still much revered) and of course more recently the siege of 1992-95 during the collapse of Yugoslavia. From arrival in the city there are visible signs of almost all of these events, some less expected than others. The Sarajevo skyline is full of minarets dating from the Ottoman period to the present day and these stand out on the descent to the city from the surrounding hills. Many buildings still show signs of shelling from the most recent war and others remain in ruins. The Latinska Bridge remains as a memory to the assassination of Austrian Archduke Franz Ferdinand by one Gavrilo Princip in 1914 - lighting the fuse to the First World War. One of the main boulevards is named for Tito. And somewhat unexpectedly, there are many stunning art nouveau buildings from the Austrian period.

The people of Sarajevo also reflect this history. The city is a mix of Bosniaks - Bosnians of muslim background (if not necessarily overtly religious), Serbs and Croats as well as Gypsies and a remnant of a once much larger Jewish community. For the most part its not easy to know who is who. There are fair skinned, fair haired, blue eyed women in headscarves and obvious Islamic dress and there are dark skinned women (and men) in very revealing clothing during the evening promenade around the old city centre when the streets are full of people in their best clothes, shopping, meeting friends and generally being seen. There are very few fully covered women here, although it appears that this is a growing phenomenon and that Saudi Arabian investment is underwriting the provision of new mosques, madrases and cultural centres.

Sarajevo is a very young city - there are children and young people everywhere and although unemployment is sky-high, (indexMUNDI quotes the official rate in 2010 as 43.1%), there is a feeling of confidence here.  The cafes are full and people seem to have money - much of it sent back from relatives working abroad. The city has been regenerating itself through culture. The Sarajevo Film Festival was on during my stay and there is an international Jazz Festival every winter, but these important events can only bring limited job opportunities for locals. The main cultural and historical buildings have been restored and tourists are coming and very welcome.

But back to the art nouveau. There are examples of this architectural style throughout the old city. The largest concentrations I saw were along Marsala Tita (a Parisian style boulevard named for Tito - pictured below), on Obala Kulina Bana (the busy main road running the length of the old town beside the river) and a residential area north of the old town, centred on Tina Ujevica. Marsala Tita has a number of glorious apartment blocks with shops on the ground floor. The Salomonova Palace dates from 1912 and was designed by Rudolf Tonnies. The street facing facade of the building has clearly been restored and cleaned and is extremely impressive with a range of nouveau motifs and a quality book shop on the ground floor. The courtyard is open and reveals a commemorative sign to the architect as well as stylish cafes on the ground floor and several floors of flats with walk along balconies. It is easy to imagine such a courtyard in Budapest or Vienna. On the opposite side of Marsala Tita, stands the stunning National Bank of Bosnia and Herzegovina (pictured below) - a much reduced form of art nouveau, but with the entrance guarded by two classic nouveau figures holding lamps and decorative freezes on the external walls.The architect was Milan Zlotovic and his building is a showstopper on this busy boulevard. The art nouveau ensemble around Tina Ujevica was originally residential but has been used for various purposes over the years. The Villa Mandic  (pictured below) was built in 1907 for lawyer Dr. Nikola Mandic and designed by architect Karl Parzik. The building was once the American Consulate and latterly the Museum of the 14th Winter Olympics held in Sarajevo. Badly damaged in the recent war, the Museum is relocated and the Villa requires significant restoration. It is located at the top of some very steep steps on the side of a hill which gives it a tremendous view of the city. The turrets, colours and grandiose entrance to the building make it well worth the climb. Adjacent to Villa Mandic is Heinrich Reiter's villa (pictured below), also designed by Parzik. A fascinating slim tower peeps from behind the overgrown garden and is adjoined to a wonderful piece of Central European architecture, decorated in rich alpine floral style and which at least according to the sign outside is partly used by the British Embassy. If it is the Embassy, and they occupy the part with the satellite dish for goodness sake can they remove it, or put it at the rear of the building - hasn't it already suffered enough? Parzik was Born in 1857 in Jicin in the former Czechoslovakia,spent 60 years of his life in Sarajevo and designed many buildings in the city including the National Museum, the Ashkenazi Synagogue, the Islamic Foundation and numerous churches - evidence of early ecumenicalism perhaps? 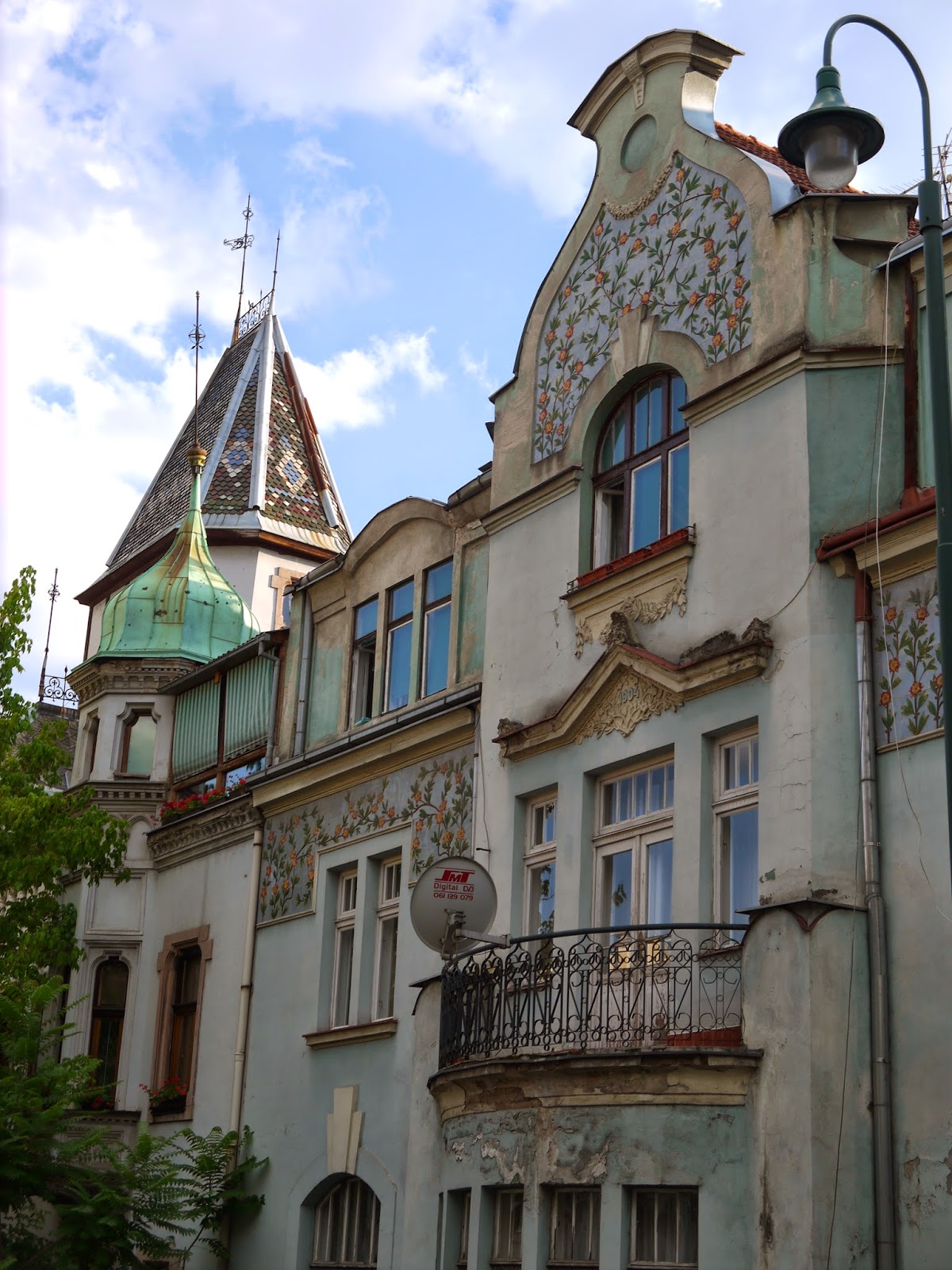 A walk along the riverside of Obala Kubina Bala affords great views of the many banks, villas and apartment buildings in nouveau and other interesting styles, including the magnificent Fine Arts Academy, again resembling Hungarian architecture of the period. Most of these buildings are in desperate need of cleaning and further restoration before they are lost.

Food usually features largely on my travels and although I've been very good recently and significantly reduced my cake dependancy, I am afraid I had a major relapse in Sarajevo. These people know a good cake alright, and how could they not, with the Turkish and Austrian influences. Its a bit of a cake paradise. Coffee drinking is a national sport - real coffee that is - in independent, long established cafes with baklava and other eastern sweets, cream cakes, fruit tarts and flakey savoury pastries stuffed with cheese, potato, spinach or meat.

My cafe of choice has to be Ramis (pictured below) on Saraci in the old town. Established in 1912 by one Nezir Nezirovic who named it after one of his sons, four generations later the cafe is still with the same family. Not only are the cakes terrific (best baklava on all my travels) but its also a great location for people watching - get one of the outside tables if you can and see most of Sarajevo come past at some point in the evening. The cafe attracts locals of all ages as well as tourists and its not hard to imagine how it must have been back at the beginning of the last century when perhaps Sarajevo was at its most elegant. Continuing the sweet theme, Bosnians like their ice cream too. You can see it everywhere. Cafes sell it from the window, kiosks sell it in the street and queues form at the best shops throughout the evening. The most popular ice cream shop is Egipat on the busy Ferhadija thoroughfare in the old town. There are many flavours to choose from but the vanilla is legendary. There is a story that some Italians were so impressed with it that they offered a huge amount of money for the recipe, but the owners didn't want to sell! I tried it and liked it and thought I detected a taste of caramel in there too...

Bosnian cuisine is very (very) meaty, but the vegetarian can survive quite well here. There is Vegehana, which is not only vegetarian but also non-smoking. Tucked away on a side alley at Ferhadjia 39, the restaurant occupies the ground floor of what appears to have been a residential property, is nicely decorated and furnished in modern minimalist style and has a good menu with vegetarian staples like tofu and seitan as well as salads and my choice of falafel and humous (no surprise there then!). The service is friendly and welcoming although a little disorganised, but certainly worth a visit if you've had enough meat or are looking for a vegetarian oasis. Elsewhere good salads are easy to find, but don't expect a long list of veggie options in most places.

The Inat Kuca restaurant on Veliki Alifakovac has great views of the river from the outside tables and on the evening I ate there, there was also an open air concert in the adjoining square - part of a month of free concerts held during the summer each year. My guide book praised the food (salads, soups, meats and the ubiquitous cheese, spinach and potato pies) but had harsh words for the service. I enjoyed the food (cheese pie with various salads) and thought the service was fine - although there only appeared to be one waiter for rather a lot of tables. The interior of the restaurant is worth a look with its beautifully decorated ceilings, walls and open kitchen. Cosy in the winter. The cheese pie by the way is a variation of what some of us know as burekas.

The only food "disaster" I encountered was in another restaurant where my friend ordered chips as a side dish. Well, chips appeared but not like you've ever seen in a restaurant before. Blackened and hard and as my friend Claudio described them, "carbonised". A new dish perhaps - chips carbon(ise)ara? But even here, there was much smiling and wanting us to enjoy the food, so a few burnt chips can be overlooked...