Stepney Green has been my home for almost ten years now. Although it isn't trendy like near neighbours Spitalfields and Shoreditch, it has many treasures and much history.

My own building, Dunstan Houses, is a case in point. Built in 1899 by the East End Dwellings Company, it was intended as affordable accommodation for working class people, was set up with work shops in the courtyard, a caretaker service and was overseen by a board that took regular reports on issues relating to rents, repairs and modernisation works, and the caretaker's annual salary increase!

The hand written Director's Minute Books of the East End Dwellings Company can be consulted at Tower Hamlets Local History Library in Bancroft Road, Mile End. Amongst the dense but easily read text, are some gems such as the comment from a board member on 6th April 1908, that there was "...room for further tidiness and cleanliness in the buildings..." whilst on 16th November of the same year "the Chairman was requested to deal as he may think best with certain difficulties that had arisen in connection with the superintendent". What he had done is not specified but I hope he enjoyed it.

The flats were not much different to how they are now, mostly two rooms, both of which would have been used to sleep in and several flats had more than ten people living in them. The 1901 census report shows a family called Davis living in my flat, he a 29 year old cloth merchant, with a 27 years old wife, Alice and three children - Leah aged seven, Hyman five, Esther two and Alexander just one. Although going by the name of Davis, it is almost certain from the forenames that the family was Jewish. There was also a sixth resident -  Bessie, listed as "sister-in-law", a Dutch subject and employed as a cigar maker.

A long term resident of Dunstan Houses (pictured below) told me that when she first moved here 30 years ago and gave the address to taxi drivers, they often said "Oh, you mean the Jews' houses". Very few Jews still live in the area. 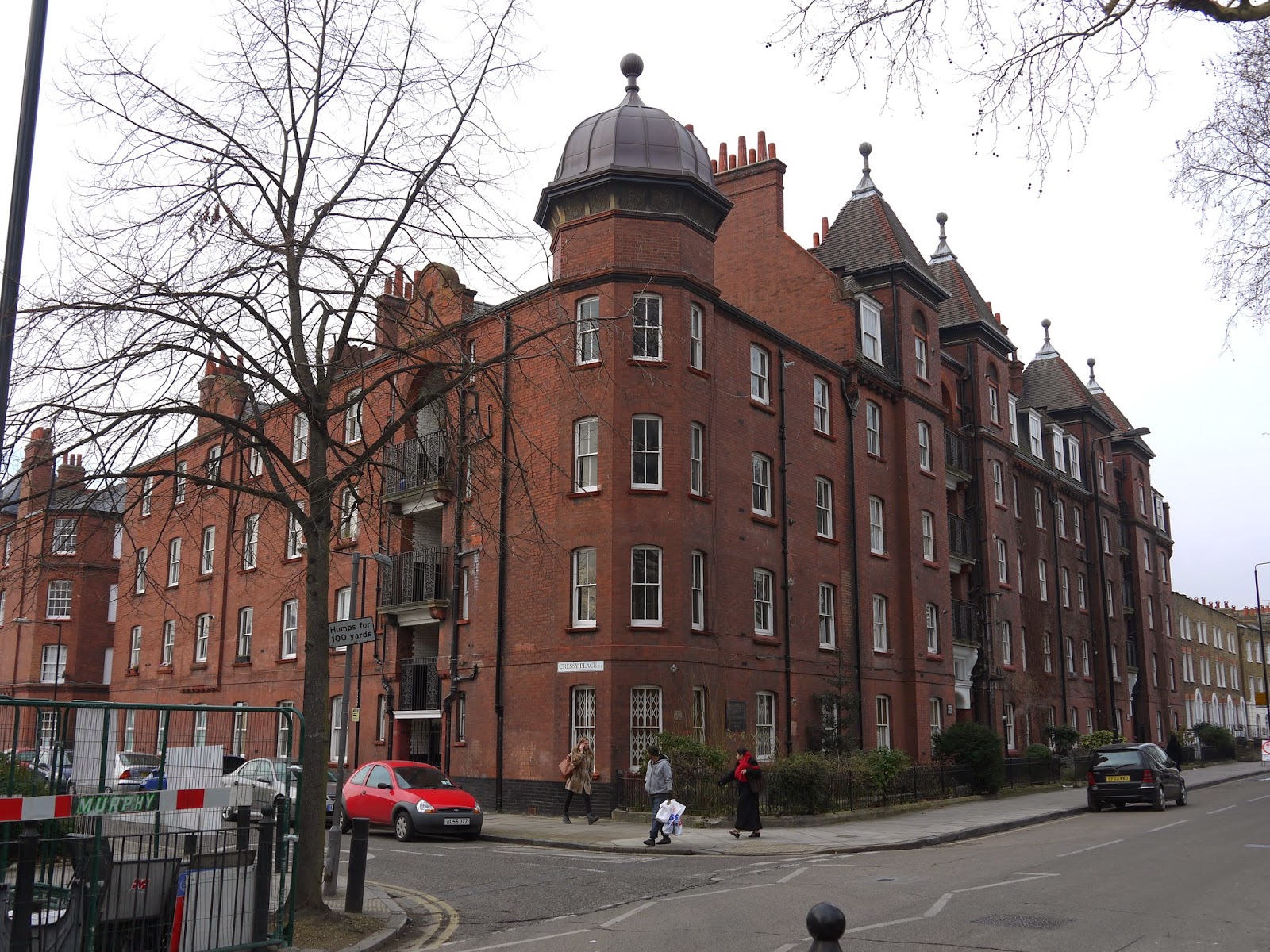 A little nearer to Mile End Road, at number 4 Stepney Green is a building that bears the legend "Daren Bread Best For Health" (pictured below). Now residential, this was once a bakery - a 1976 photograph of the building has the word "Hovis" superimposed over the original slogan but this has been lost with time. The 1923 Kelly's Directory entry for this address lists a bakery belonging to one Samuel Weinbaum. The 1973 edition still lists the address as a bakery, but this time under another owner's name, A. Lewis. By this time, most of the once dominant Jewish community had already left for North West London, for Essex or in some cases for Israel. Stepney Green has not been without famous residents. Rudolf Rocker, the German anarchist and trade union organiser (can you be both?), who incidentally was not Jewish, and who organised sweated labour into unions spent a few years in Dunstan Houses - although we don't have a blue plaque to prove it. Come on Tower Hamlets...

Writer Bernard Kops was brought up on the opposite side of the green in 23 Stepney Green Buildings, now Stepney Green Court. He has written widely about the East End, including "East End by the waters of Whitechapel". He tells a story of a very different East End and of a naive childhood born out by his story of the stranger in the park with the magnifying glass..."He'd catch the rays of the sun and burn pieces of paper, and we'd all stand around and fan the flames...we had been warned not to go near him. On this Saturday morning he burned the paper as usual, and touched us all, boys and girls, between the legs. The next moment a policeman was gripping hold of him and pulling him away. We followed him as he was being dragged along the Green. I couldn't understand why the policeman was hurting him so much, all because of a magnifying glass and a few pieces of paper..."

Opposite Dunstan Houses, on the other side of the green, there are some very beautiful houses, some of which date from the 18th century. Amongst these are numbers 35 and 37 - formerly the Jewish Old People's Home, whilst close by the Rosalind Green Hall, now a boxing club was once an Orthodox synagogue. This stretch of properties now exchanges hands for seven figure sums, but the Local History Library has an interesting estate agent's advert from 1985 offering one of them, grade two listed, with nine rooms, two bathrooms and a garden for the princely sum of 85,000 pounds! If only...

Other, now defunct, Jewish establishments were the Stepney Jewish School which closed in the 1970's but is still there and is now residential whilst the old East London Synagogue(pictured below) is also a block of flats called Temple Court. There is little on the outside of the building to mark this but I am told a few of the internal features have been retained. Victorian municipal pride was often expressed through the provision of monuments. We have several in Stepney. On Stepney Green itself, there is the sadly neglected Montefiore drinking fountain. The cup has gone, there is no water and the text is wearing away badly. Adjacent to the fountain is a small enclosed and well kept area with a clock tower monument to one Stanley B. Atkinson, who we are told lived a short life from 1873-1910 but in that time was a Stepney Councillor, Guardian of the Poor and member of the Metropolitan Asylums Board. There is a further tribute to him on the first floor of the Local History Library. The monument is pretty but none of the clocks work. Tower Hamlets?

Out on Mile End Road, just around the corner from the Green stands the magnificent former Wickham's Department Store. The Wickham family were originally drapers who traded from 69-73 Mile End Road. In 1892 the proprietors of number 75, the Spiegelhalter family of clockmakers and jewellers agreed to move to 81, allowing the Wickhams to expand into 75. In 1927, the Wickhams, by this time doing very well acquired the entire block except number 81 and this time the Spiegelhalters were not for moving. This meant that the planned department store had to be built around their shop which continued to trade, landlocked by Wickham's. It also explains the lop sided shape of the building.

The Spiegelhalters saw the Wickhams out as the department store closed in the 1960's whilst the jewellers remained until 1982 finally selling out to an off license. From then onwards, the beautiful classical style building was sadly neglected becoming home to a DIY store and a branch of Blockbuster - both now closed. In 2011 the upper level of the building re-opened as banqueting rooms with a Tesco Metro and a sports shop on the ground floor and the promise of more shops to come. We shall see, but not quite the grand scheme the Wickhams (pictured below) had of rivalling Selfridges. This part of Mile End Road has hidden treasures. Behind the old department store and behind a heavy wooden door is a tiny row of cottages with what can only be described as English country gardens with foxgloves, snapdragons and other delights. I am told that these homes were once tied accommodation for brewery workers and that the rents were fixed at a ridiculously low level for the last families connected with the business. Is this true? There is also a luxury hotel called Forty Winks, located in a Queen Ann townhouse dating from 1717.

Alittle further down Mile End Road and you come to Trinity Green, a horseshoe of almshouses with a chapel at the bottom. The houses were built in 1695 and carry the legend "This Almes House wherein twenty-eight decay'd Masters and Commanders of Ships, or ye Widows of such are maintain'd, was built by ye CORP. of Trinity House 1695. The Ground was given by Capt. Henry Mudd of Ratcliff an Elder Brother, whose widow did also contribute" (sic). Eight of the houses and the chapel were destroyed or badly damaged in the second world war, but some restoration has taken place and Trinity Green has a mixture of residents today. Peep through the railings to get a glimpse of village life on the noisy Mile End Road in the heart of the East End.

There are yet more monuments near Trinity Green, including statues of William Booth and King Edward Vll, whilst on the other side of the road is a plaque to mark the spot of a house once lived in by the famous explorer Captain James Cook.

So, we don't have a cafe society or thriving bar scene in Stepney Green and we don't have a market or niche shops, but we do have some fantastic buildings, lots of history and the best cheese cake in London at Rinkoff's bakery in Jubilee Street, just off Mile End Road. And for a cool million or so you can have an 18th century house overlooking the Green...
Posted by Yekkes at 16:59