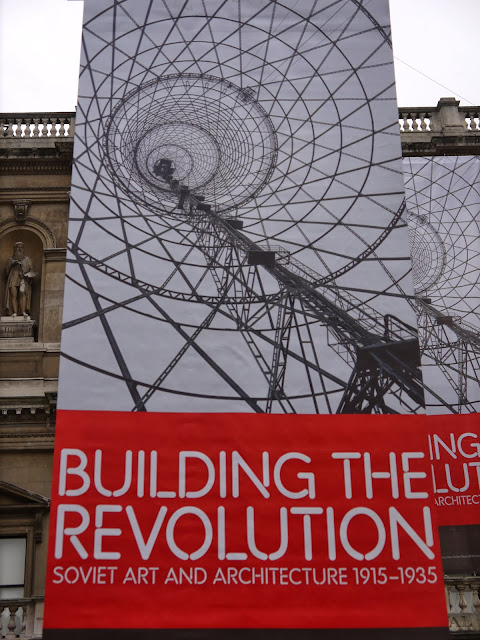 This is the title of one of the current exhibitions at the Royal Academy, which I finally managed to visit today.

The exhibition surveys avant-garde Soviet architecture from 1915-1935, using photographs, drawings, plans and works of art from the period to illustrate how architecture was used in the attempt to transform a society. The early days of this transformation improved living conditions for many people but also emphasised social differences with special provision for military leaders, some doctors, the Cheka (later the KGB) and other leading Soviet groups.

The grandeur of much of Soviet architecture is illustrated by a courtyard reconstruction of Vladimir Tatlin's proposed but never built Monument to the Third International. The vastness of Tatlin's plans is demonstrated by the tiny human figures at the foot of the tower.

A number of the buildings featured are now in very poor condition, including my own favourite - the Narkomfin Communal House on Novinksi Bulvar in Moscow, built in 1930 and designed by Moisei Ginzburg and Ignatii Milinis. The House was one of many experiments in communal living with a shared dining hall, kitchen, reading room and a laundry as well as a number of self contained apartments for families not ready to participate in a more communal approach to living.

I have to confess I was unaware of these attempts at communal living that strongly remind me of some of the ideals of the kibbutz movement in Israel or the less structured communality of Tel Aviv in the 1930's where many of the apartment buildings had committees and shared space on the roof or in courtyards for shared activity.

The exhibition features photographs of the Narkomfin House in 1931 - all pristine white exterior, clean lines and modernist furniture in the communal areas, again highly reminiscent of Tel Aviv during this period and of the Bauhaus School in Weimar Germany. These contrast with the current very sad state of affairs recorded in Richard Pare's photographs from the mid 1990's showing the House crumbling both inside and out, its future uncertain.

Many of the buildings featured in the exhibition are in Moscow, but there are also many more in St. Petersburg, Kharkov (which the Soviets temporarily designated as capital of the Ukraine instead of Kiev), Ekaterinburg and Baku which is today the capital of independent Azerbaijan.

The modernist images from the early 1930's are extremely optimistic and it is sad to see the current situation of many of them - crumbling, collapsing and disintegrating in the same way the Soviet Union eventually did. It is telling that the modernist experiment was ended by Stalin's intervention, with a directive to return to classicist references in Soviet architecture.

Some visitors will be surprised to find that Le Corbusier and Erich Mendelsohn also feature in the exhibition, having been commissioned by the Soviets to design a range of buildings for them. Mendelsohn's case is especially interesting as only parts of his design were used provoking a furious response from him that Soviet architecture was sub standard and doomed to failure!

I should have confessed that I have a weakness for many things Russian - Chagall, Goncharova, Rimsky-Korsakov, Rachmaninov, "style moderne" architecture and the cities of St. Petersburg and Moscow. I love the grandeur, the "bigness", the idea that a place with such a terrible history has produced things of such stunning beauty. This exhibition reminds me of why I admire Russian art and artists so much, especially the avant garde movements of the 1920's and 1930's. It has also given me some extra places to look for when I visit Moscow in September next year.

Update - I managed to visit Moscow for a second time in 2012, hence the photograph above of the Narkomfin House. I was also able to view a number of other avant-grade buildings from this period, some in terrible condition and in danger of being lost. You can read more about them here. Incidentally, some people compared the model of Tatlin's proposed monument to the tower in the Olympic Park at Stratford. You can see what they mean... 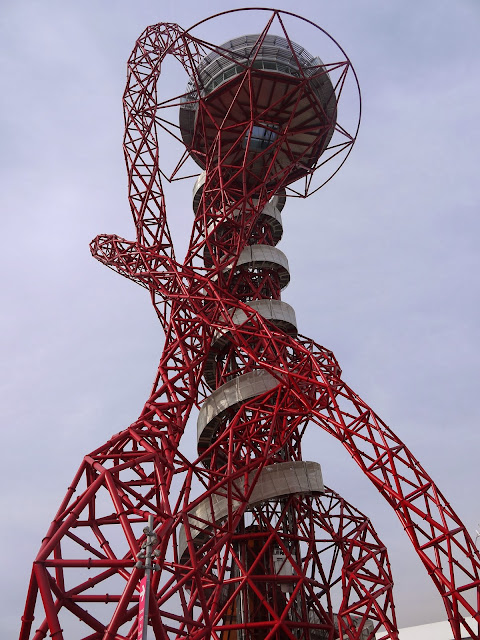