Jewish Kaunas - Fragments of the Past

The Litvaks, or Jews of Lithuania once formed one of the world's most vibrant Jewish communities. According to the YIVO organisation Kaunas was home to 32,000 Jews in 1939 - 23% of the city's population. About 3,000 survived the Holocaust and the 1959 census showed 4,792 Jews living in the city.  Today at most there are a few hundred. Numbers declined during the communist period due to falling birth rates, inter-marriage and restrictions imposed by the state. Then, following the collapse of the Soviet Union a wave of immigration further reduced numbers. This tiny community is the remnant of what was once a large, diverse and accomplished Jewish presence in the city they knew as Kovne. Although there are few Jews here now there remain many reminders of the old days including former community buildings, various memorials and a growing interest in the Jewish past.

The Choral Synagogue at E. Ozeskienes street is the only remaining Jewish house of prayer in a city that was once home to more than 35 synagogues and shtiebels. Funded by local merchant Lewin Boruch Minkowski, this Baroque revival style building was completed in 1872. During my time in Kaunas, I met the caretaker who told me that in pre-war days, so many people attended Rosh Hoshanah, Yom Kippur and other holiday services that they could not all fit in to the building. Today there are still holiday services attended by local community members with numbers boosted by students from the nearby university, tourists and foreigners working in Kaunas. There are rarely enough attendees to form a minyan on shabbat.

The interior is in the eastern style with a beautiful aron kodesh as well as stained glass windows. The upper level, formerly the women's gallery, is now home to a small museum of Jewish life in Kaunas. This includes an exhibition of portraits of important rabbis and black and white photographs of community life before the Holocaust. There are also photographs of a Yiddish Theatre performance in the postwar period when the surviving Jews tried to rebuild their community. Unfortunately such expressions of Jewish cultural life were suppressed by the Soviet regime, opposed to anything outside of politically approved activity.

Before the war, the community produced many famous artists, writers and musicians. These included poet and author Leah Goldberg, born in Konigsberg (today Kaliningrad) in 1911. Her mother preferred to give birth there as she believed the medical facilities were superior to those of her home town. However Goldberg referred to herself as a native of Kaunas. Educated at the Hebrew Gymnasium, she continued her studies at the Lithuanian University and then in Germany before moving to Tel-Aviv in 1935. In Israel she worked as an advisor to HaBimah (the national theatre). and later as a lecturer at the Hebrew University in Jerusalem. She published poetry, drama and children's literature as well as one novel - And This Is The Light - believed to be at least partly autobiographical. Goldberg was posthumously awarded the Israel Prize for Literature, the highest recognition for a writer in her adopted country.

The Jewish contribution to popular music in Kaunas was also significant. Violinist Daniel Pomeranz had studied at the Berlin Conservatoire and led a jazz ensemble that played regularly at the former Konradas Cafe at Laisves 51(now a branch of the Vero Cafe chain). His group became so well known that they were asked to record a number of shellac discs for the Columbia record label. During the German occupation, Pomeranz was imprisoned in the Kaunas ghetto where he formed an orchestra together with Moishe Hofmekler, another band leader. Hofmekler had been the leader of the orchestra at the Metropolis Restaurant and his concerts were broadcast live on the radio. Both Pomeranz and Hofmekler survived the Holocaust.

A number of famous singers accompanied Hofmekler's orchestra including Danielus Dolski, born in Vilnius in 1891 and who popularised singing in the Lithuanian language. During the 1920's he was known internationally but sadly contracted pneumonia and died at the age of 40 in 1931. There is a statue of Dolski on Laisves Avenue opposite the former Metropolis cafe. Many of his songs are available on youtube including this one.

Just around the corner from the Choral Synagogue there is a small alley with apartments that were once home to Jewish families. When artist Vytenis Jakas moved into an apartment here he became curious about the families that had lived there before the War. In order to remember these people, he established the Yard Gallery - an open air art gallery, placing photographs of former residents on the facades of the houses, some with notes and messages added. A number of artists live in the vicinity and there are also interesting installations and murals unrelated to the Jewish past.

The images in the Yard Gallery act as a memorial to ordinary families consumed by the Holocaust. They give a glimpse into the lives of everyday people, people otherwise perhaps not commemorated. Walking the streets of the city it is possible to see more formal memorials. The facade of number  8 Kestucio Street bears a plaque with text in Hebrew and Lithuanian explaining that Doctor Elchanan Elkes lived here from 1939 to 1941. Somewhat ironically, as well as working at the Jewish hospital he had been physician to the German Ambassador for many years before the War. In 1941, he became head of the Judenrat - the organisation established by the German occupiers to implement their commands regarding the Jewish community. After reluctantly accepting this role, he is known to have been involved in supporting partisan actions against the Germans as well as refusing to participate in selections for deportation. As a result of this he was sent to a sub-camp of Dachau where he died in 1944. His wife Miriam survived the Stutthof camp and moved to Israel after the war whilst his son became a prominent researcher into schizophrenia.

Abraham Mapu was born in the city's Slabodka neighbourhood in 1808. He became known as the first Hebrew novelist, setting his romantic adventure stories in the biblical land of Israel. A library was established in his name in 1908 but was destroyed during the Second World War. A street in the Old Town bore his name from 1919 until the Soviet period when it was renamed before being restored to "Mapu Street" in 1980. Ludwik Zamenhof, the creator of the Esperanto language met and married his wife Klara Zilbernik in Kaunas, probably in the former synagogue that stands in the street named after him. The synagogue is now a psychology institute and is not accessible to the public. 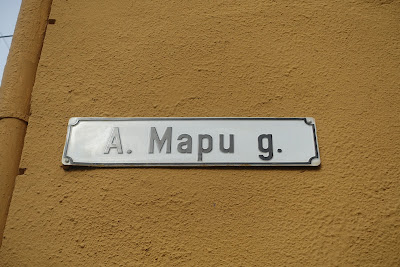 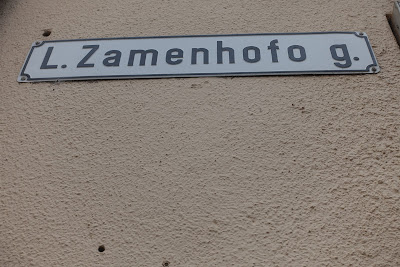 The story of the Holocaust in Kaunas is similar to that of most other Eastern European cities. A series of pogroms were perpetrated by the German occupiers with Lithuanian assistance before the remainder of the community was enclosed in a ghetto in Slobodka. Several thousand Jews were also killed in the building known as the Ninth Fort on the outskirts of the city. The Fort can still be visited. Several thousand Jews were deported to the Riga ghetto in Latvia, to camps in Estonia and to Dachau and Stutthof in Germany. 80% of those deported did not survive the war and most that did chose not to return to Lithuania.


It is known that several Lithuanians took part in massacring their former Jewish neighbours, particularly in the earlier pogroms. However, there were also Lithuanians who tried to help Jews. Yad Vashem in Israel has recognised rescuers from Kaunas including the Blazaiciai family who hid and cared for Rosa Fin, a Jewish girl until, miraculously, her parents returned at the end of the War.  Sofia Binkiene has been similarly recognised for sheltering Jews she found wandering in the street during the final liquidation of the Kaunas ghetto. The penalties for harbouring Jews were harsh usually ending in the rescuer being shot and the bravery of these individuals should not be underestimated. 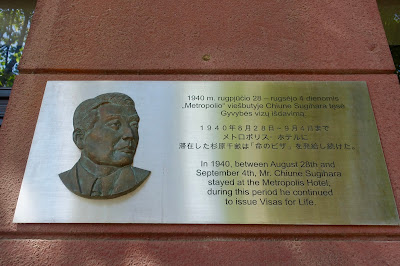 Chiune Sugihara was the Japanese Vice Consul in Lithuania at the beginning of the Second World War. In 1940, he became aware of large numbers of Polish Jews fleeing the German invasion of Poland and needing exit visas to escape before Lithuania was overrun. The policy of most governments was not to grant a visa unless the applicants had the right to enter a third country. However, by this stage in the War, no countries were willing to grant settlement visas and the Jews were trapped. Sugihara sympathised and three times requested permission to issue visas regardless of the applicants' status. Three times he was refused. He decided to take matters into his own hands and from July 18th to September 4th 1940, issued thousands of transit visas having secured agreement from Moscow to permit travel across Russia en route to Japan albeit at hugely inflated cost.

He continued writing visas until the Consulate was closed, even throwing them from the train to the waiting crowds as he left. In total he issued around 6000 visas but saved many more lives as the documents allowed heads of families to take relatives with them. As a relatively junior diplomat, Sugihara's decision to act alone was at great risk to himself. Not only that, Japan was an ally of Germany who viewed the refugees as enemies. He ended the war as the Vice Consul to Romania and when Bucharest was captured by the Soviets he and his family spent 18 months in a prison camp. Following their release and return to Japan he was removed from his post and reduced to working in menial jobs to survive. He was invited to Israel in the 1960s and in 1985 was granted status of Righteous Amongst The Nations after lobbying from some of those he had saved. The Sugihara House at 30 Vaizganto Street has a small museum about the former Vice Consul. It is currently being refurbished but is still open for visitors.

There are few Jews in Kaunas today, but there are echoes of the past everywhere and the Jewish contribution to the city's development is again beginning to be recognised.


Kaunastic  the Visit Kaunas team, has produced an excellent map and guide to Jewish Kaunas. The Litvak Landscape can be picked up at the Tourist Office and the Sugihara House or downloaded from the website.
Posted by Yekkes at 23:36