There are many claimants to the title of city with most art deco buildings. Melbourne must surely be a contender not only in sheer numbers but also in terms of variety and quality. I recently made a fourth visit to this lovely city and  spent some time looking at more examples of the style with my friends Robin and Robyn of the Art Deco and Modernism Society Over the course of two days they very kindly took me to see many buildings in different parts of the city. I have previously written about Melbourne's art deco homes. This time I have selected five public buildings.


The Sun Theatre in Yarraville was built in 1938 and designed by architects Cowper, Murphy and Appleford. Originally the cinema had a single screen and could seat 1050 patrons.  It stands out due to the rooftop sunburst which gives the theatre its name. The yellow the sunburst contrasts beautifully with the white painted elements of the facade where there are also examples of the art deco rule of three. The clean brick work adds a further contrast. Extremely luxurious, the cinema featured a sweet shop (now a book store), a booking office and perhaps uniquely, a pram room where babies could be left and supervised. The parents were issued with a number on arrival and if their baby cried, the number was flashed on to the screen!

The usual story of decline during the 1960's led to the cinema closing and being converted to a short-lived Greek theatre before standing derelict for two decades. The building was acquired by new owners in 1995 and the transformation into today's success story began. The current theatre can seat 700 people across eight screens each named after closed Melbourne cinemas. Patrons can sit on club chairs around a coffee table and enjoy lots of leg room.

The renaissance of the theatre has contributed significantly to the regeneration of what was until a few years ago, a rundown and shabby part of the city. Today there are several good quality cafes and restaurants in the surrounding streets, a handful of interesting local shops - including one described as a "lamb boutique" rather than a butcher (!), whilst there is also an art deco pub just around the corner. What more could you want? 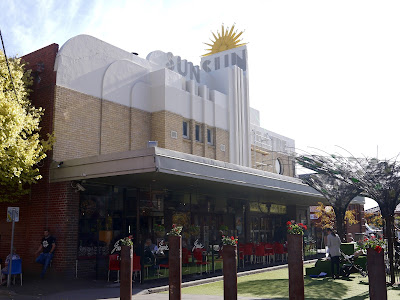 We also visited the beautifully restored Rivoli Cinema on Camberwell Road in Hawthorn East. Completed in 1940 and designed by Taylor and Soilleaux the cinema could originally seat over 1,600 customers. The first screening was of French Without Tears starring Ray Milland.

Like the Sun Theatre, it is another extremely striking building with its beautiful long red brick facade and vertical stylised lettering on the central fin. The interior is equally attractive with terrazzo flooring in the lobby, original mirrors and decorative elements and a wonderfully dramatic double staircase leading customers up to the main screen. Its just a pity that the staircase is covered in a brash highly patterned carpet which covers up the original flooring.

As with many cinemas, the Rivoli went through some very lean years from the sixties onwards but at the end of the 1990's, was subject to both extensive restoration and extension, increasing the number of screens to eight. The  multi-million dollar works were completed in 2000 and although the modern part is obvious it is at least reasonably sympathetic to the original,  streamline moderne exterior.  The restoration was carried out with extensive advice from the Art Deco and Modernism Society and from Heritage Victoria who added it to the state heritage register in 2005.

As well as cinemas and theatres, Melbourne has a number of other art deco public buildings. The MacRobertson Girls' High School on Kings Way, South Melbourne was designed by architect Norman H. Seabrook of Seabrook and Fildes and was completed in 1934. The architect had recently returned from the UK where he had been influenced by developments in European architecture, particularly the work of Willem Marinus Dudok in the Netherlands. Seabrook and his wife cycled 2000 miles (yes, two thousand) through the Netherlands, Belgium and Germany to see the new architecture for themselves. No internet in the 1930s. The school's design has references to the work of another great Dutch architect, H. P. Berlage particularly the lovely cream brickwork, similar to that of the Gemeentmuseum in Den Haag (although the school preceded it by one year).


The facade consists of interlocking forms of differing heights clad in those smooth cream bricks. The vermillion steel framed windows surrounded by glazed blue bricks bring colour and depth whilst the many discrete design features such as the clock tower, flagpole, a canopy over the entrance and deco motifs on the fall pipe add further character. The internal areas were designed to separate different functions - science, art and home economics as well as to enable smooth movement between different parts of the building.

Although much more built up today, the school's location was originally open scrubland. Seabrook incorporated the open space into his plans, making use of native plants. Unlike other schools of its time, the McRobertson is not surrounded by a high wall to prevent views in and out and the students would have been able to benefit from direct access to these open spaces.

Melbourne can also boast a number of art deco hospitals.  The former Mercy Hospital in Grey Street, East Melbourne (now St. Vincent's Private Hospital) was designed by Arthur Stephenson of Stephenson and Meldrum. He had also spent time in Europe where he had been particularly influenced by the work of Finnish genius Alvar Alto having visited his Paimo Sanatorium. Completed in 1934 and sympathetically extended in 1939, the hospital has a ship-like appearance, one of the hallmarks of the art deco buildings of this period. It is believed that Stephenson took a modernist approach to designing the hospital in order to reflect the institution's scientific and medical principles. I love the front facing balconies with their  lovely white curves topped by red railings. In the early days of the hospital the balconies were used as part of the treatment regime, exposing patients to fresh air and sunlight. The more cynical might also say that they were a good place to have a sly cigarette too!

And finally, from health and hospitals to diet. The former United Kingdom Hotel at Queen's Parade, Clifton Hill is now home to a branch of the worldwide burger chain McDonalds. The hotel sits on a triangular site which might partly explain its classic deco ocean liner appearance.  The exterior also features terra-cotta tiles, elegant balconies and stained glass windows. I really like those stained glass windows - pity about the net curtains behind them though! Of course, the exterior now bears a huge letter M as part of the Mcdonald's branding but this is preferable to losing the building completely which I understand was at one time a possibility. The United Kingdom Hotel was completed in 1937 and was the work of James Wardrop who was also responsible for the Shrine of Remembrance in St. Kilda Road. I have to confess I took a peek inside the former hotel and was surprised to notice salads and macaroons on offer as well as the usual burgers and fries. I resisted it all and had a cheese toastie and a hot chocolate. My toastie was tasty and the chocolate fine.

You can read more about Melbourne's art deco heritage in the revised edition of Robin Grow's book Melbourne Art Deco - a real bargain and full of great photographs too.

You can see more photographs of Australian art deco architecture here.
Posted by Yekkes at 13:13