Singapore is known for its ultra-modern architecture, beautiful shop-houses and a serious approach to shopping. However, the island also has a significant number of surviving modernist and art deco buildings and I was able to see several of them when I recently spent a few days there en route to Australia. 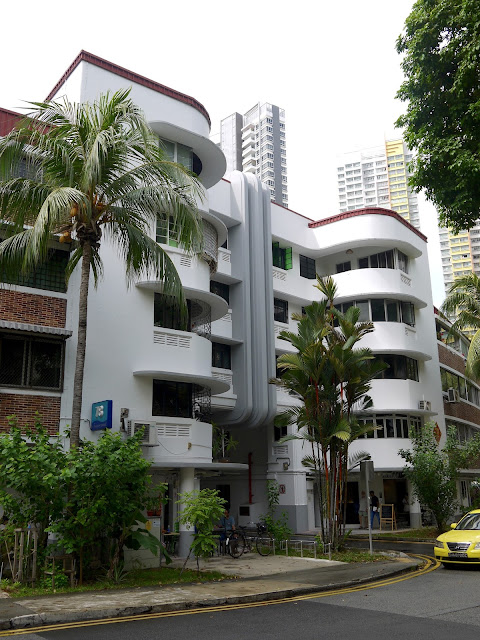 The greatest concentration of deco style buildings in Singapore can be found in the Tiong Bahru neighborhood where in the 1930's, about 50 blocks of  low-rise flats and shop-houses were constructed initially to accommodate residents from overcrowded parts of Chinatown. The public housing project began in 1927 when the Singapore Improvement Trust (SIT) was granted the sum of $260,000 to acquire 70 acres of land in Tiong Bahru for shop house lots on what had been semi-rural land and burial ground. This was no small task, involving a huge marshland reclamation project with some places being up to 2 metres below sea level. By 1931 roads and drains were in place together with plans for building 900 houses to accommodate 13,500 people in total - 15 in each house. It's worth pausing to consider that figure against the purpose of the project - reducing overcrowding elsewhere!

Architect Alfred G. Church was commissioned to design the flats between 1936 and 1941. Church favored the streamline moderne style, abandoning some of the more ostentatious elements of art deco, preferring simple, functional lines reflecting the connections between architecture, the machine age and modernity. The Tiong Bahru buildings from Church's period display many of the classic features of streamline moderne including rounded corners, long horizontal and vertical lines, potholes, bands of windows and flat roofs. The original windows and door frames for the dwellings were imported from England - from the famous Crittal Manufacturing Company that still exists today. Blocks 81 and 82 on Tiong Poh Road particularly reflect the links to the machine age and became known as the aeroplane flats due to their resembling the wings of an airplane. 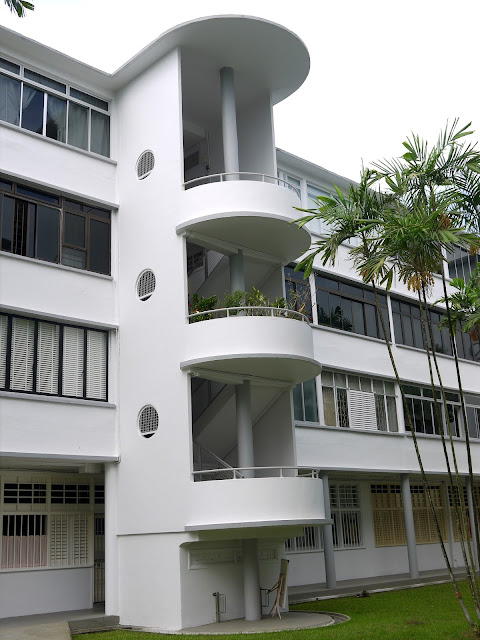 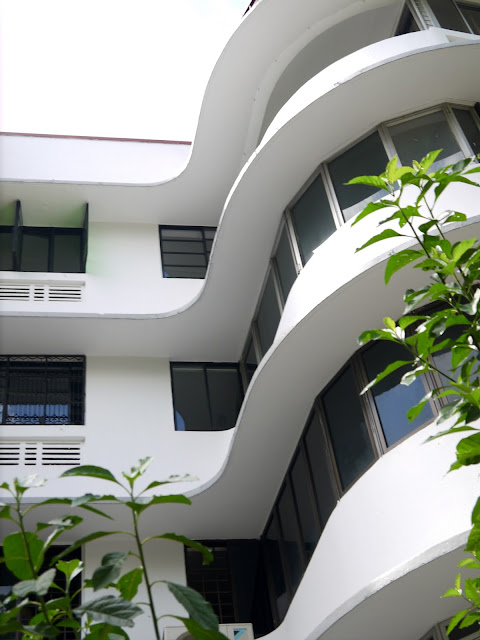 Although Church was influenced by western architectural preferences, he included a number of elements designed to cope with tropical conditions. These included sheltered walk-ways running the length of buildings, protecting residents from extreme sunshine and from rain, spiral staircases at the rear of the flats, adapted from shophouse designs and acting as a fire escape and locating the kitchen in a protruding section of the apartment, allowing cooking fumes to escape via an air well. This latter feature meant that people could see into each other's kitchens and even speak to each other whilst cooking. Resident Tan Peng Ann told the Oral History Centre of the National Archives of Singapore that "The kitchens were such that you can actually speak to your neighbor. There's an air well and you can talk to your neighbor across it and then with a little bamboo pole you can pass goodies across". This adapting of the style moderne approach to include local elements allowed both for more comfortable living and for a feeling of familiarity for the former Chinatown dwellers.

Perhaps the most distinctive part of the estate is Block 78 where Moh Guan Terrace and Guan Chuan Street meet. Known as the "Horse-shoe block" due to its shape, it was built between 1939 and 1940 and is the largest of the blocks. The ground floor is a mix of residential and shop units, including Hua Bee, one of the oldest coffee shops in the neighborhood. Founded in the 1940's it sold only drinks, bread, eggs and fishball noodles. It was also one of a very small number of coffee shops in Singapore that served coffee with a slice of butter in the cup to enrich the taste - something I have yet to try. The shop was used as a set for Eric Khoo's 1995 film Mee Pok Man. There is a car park at the rear of the block, accessed by passing underneath the flats and a recessed central "elephant's trunk" - a horizontal architectural feature complying with the art deco "rule of three". This together with the deliciously curved corners of the blocks linked by this feature is the star attraction of the estate for me. We will return to Block 78 in due course. 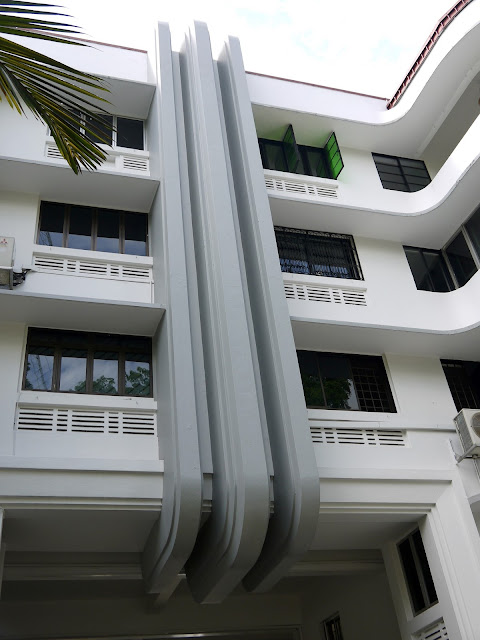 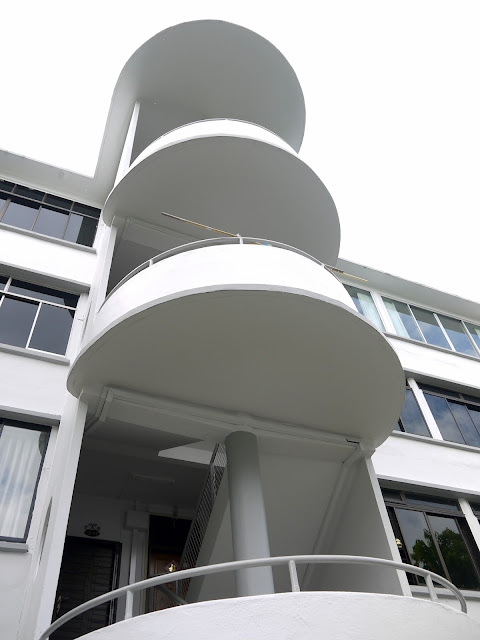 Back to the story. The first units were ready in December 1936 and 11 families moved in to what is today Block 55 at the junction of Tiong Bahru and Tiong Poh roads. It included 28 apartments and four shop units. However the original purpose of the developments seems to have been quickly lost due to the high rental of $25 per month - way beyond the means of poorer Chinese families and so that flats were mainly occupied by members of the "clerical class" and soon after by European families, several of whom were living there by August 1939. This drew the criticism of the Singapore Ratepayers Association, led by one Tay Lian Teck.

1941 there were 784 flats, 54 tenements, 33 shops and over 6,000 residents. Building ceased during the remainder of the Second World War and did not resume until the 1950's. Block 78 had been designed with a huge basement that included a 1500 square metre bomb shelter capable of holding 1600 people. Tiong Bahru was not targeted during Japanese bomb raids and according to former residents the shelter was rarely used. However the estate was targeted for screening out of anti-Japanese elements once the occupation began. Artist and former resident Huang Po-Fang recounted how residents were questioned in a requisitioned coffee shop. Those who did not pass the screening were executed by firing squad but it is said that the investigation officer at Tiong Bahru was more compassionate than those in other parts of Singapore.

During the 1950's a further 1,258 flats were added. These were designed to be surrounded by open space, with grass plots, playgrounds  and other facilities. This approach provide extremely popular and by the late 1950's there were a further 17,000 residents. Linda Koh moved into Moh Guan Terrace in 1942 and is recorded in the Tiong Bahru Heritage Trail publication as saying that during the 1950's several wealthy businessmen kept mistresses on the estate, causing locals to refer to Tiong Bahru as Mei wen ro or den of beauties. The presence of pipa girls in some of the flats added to the somewhat daring atmosphere during the 1950's. The term pipa was a genteel term for a prostitute. The Tiong Bahru pipa girls lived there with their minders. Most had been sold into prostitution at a young age and had been taught to sing, play musical instruments, recite poetry and hold intelligent conversations before branching out into less cultural activities as they grew into maturity. 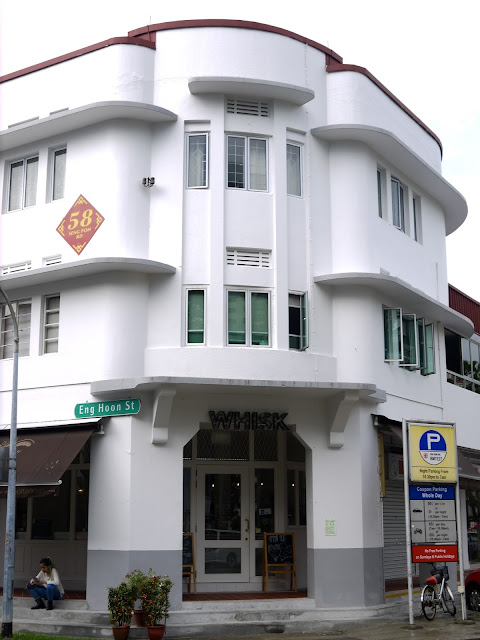 Although the development commenced as a social housing project, Tiong Bahru is now an extremely sort after residential area. There is recognition of the importance of its built heritage evidenced by commemorative plaques, publications and heritage walks. In 2003 Singapore's Urban Redevelopment Authority gazetted 20 blocks of the pre-war flats for conservation so that the unique architecture can be preserved.

Tiong Bahru still has a  residential, neighborhood feel to it and has some good local shops. If visiting, the Forty Hands coffee shop at 78 Yong Siak Street is a good place to stop for a rest or if something more substantial is required, there are many stalls in the Tiong Bahru Market and Hawker Centre. Another little gem is Books Actually, a great little book shop just across the road from Forty Hands. Piled high with contemporary fiction,  classics and non-fiction, the stock includes many titles by Singaporean writers. The shop's website is very good and has reviews of new items and the staff are very friendly and able to give advice. I picked up My Mother-in-Law's Son by Josephine Chia which is proving a great read. Tiong Bahru might just be Singapore's best kept secret! 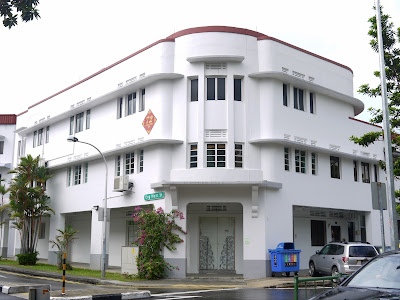 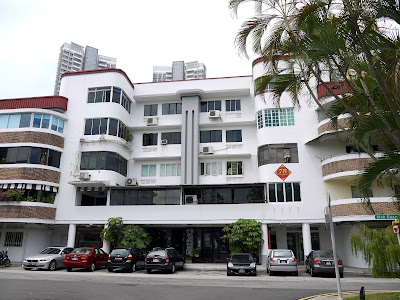