The last decade of the 19th century and the first decade of the 20th century saw an eruption of creativity in Europe that encompassed art, architecture, literature, music, theatre and many other art forms. Perhaps the epicentre of this activity was Vienna, the capital of the Austro-Hungarian Empire which saw the struggle for modernism played out across all areas of the arts.

Many of the younger Vienna based artists, dissatisfied with the staid exhibition policies of the Vienna Kunstlerhaus broke away to form the "Association of Austrian Artists - Secession". The new movement , founded in May 1897 with Gustav Klimt as its president, was driven by the desire to be able to "create as artists" and also, to present to the public, new ways of understanding art.

The Secession included some of the most important artists of this period and also of the 20th Century. A new kind of artist emerged - an artist who was not limited to a particular art form but able to operate across a range of disciplines including architecture, painting, furniture design and even fashion. Examples of this include Joseph Maria Olbrich (architect of the famous Secession building in Vienna), Josef Hoffmann (architect, furniture designer, graphic designer) and Koloman Moser (painter, designer of applied arts and fashion) and of course, Gustav Klimt, whose works have come to define the period not just in Austria but across Europe.

Many of these artists focused on "Gesamtkunstwerk" or "total works of art", often acting as architects to the wealthy, designing not only the structure of the building, but also the furniture and fittings, deciding on their placing, and even on occasion, designing the clothes to be work in the building too! Josef Hoffman's Palais Stoclet in Brussels is an excellent example of this. There are stories about architects/ designers entering homes they had designed at great expense to their wealthy patrons and re-arranging the furniture if the owners had dared to change the original layout. Another story is told about Hoffman leaving a cafe in a state of distress when the proprietor refused to move a palm tree that he found aesthetically displeasing!

The Secession movement was also characterised by an extremely modern approach to public relations. This included regular, small exhibitions of selected works to distinguish themselves from the turgid Kunstlerhaus shows and also the showcasing of works by foreign artists including Belgian symbolist Fernand Khnopff, expressionists, Norwegian Edvard Munch and German Kathe Kollowitz and the Dutch art nouveau artist Jan Toorop.

Between 1897 and 1905, when the organisation split with the departure of the "Klimt Group", a total of 23 exhibitions were held. Marian Bisanz-Prakken writing in"Vienna 1900 and the heroes of modernism" describes these exhibitions as "singular achievements in the field of interior design". 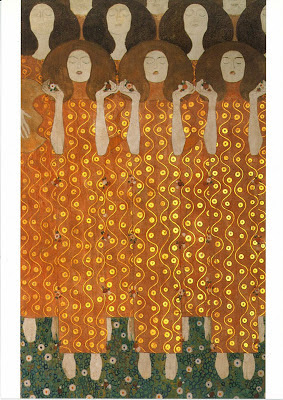 Perhaps the most famous of these exhibitions was the "Beethoven Exhibition" staged in the Secession building in 1902. Twenty-one artists worked on this exhibition with the objective of restoring the connections between architecture, painting and sculpture. Hoffman conceived the interior design for the exhibition, which featured Max Klinger's monumental Beethoven sculpture. However, it is the "Beethoven frieze" painted directly on to the walls of the Secession building by Klimt and which was the biggest attraction and can still be seen today (detail right and below right)). At the time it polarised opinion - people loved it or hated it.  Ludwig Hevesi writing in "Acht Jahre Secession"  in 1906 described it as "...a delightful frieze...that reveals so much of (Klimt's)bold and masterful artistic personality that one could fain call this painting his masterpiece". Success. 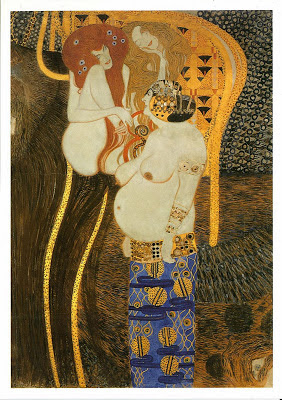 I have visited the frieze twice. I can see why it might have shocked some of Vienna's more conservative residents back in 1902, but for me it is a work of great beauty and stunning colour which has continued to inspire a response until today. What could be seen as a risqué version of Klimt's most well know work (although for me not the best), "The Kiss" forms part of the frieze - "The Kiss" itself adorning at least a million walls around the world in poster format as well as countless book marks, greetings cards and post cards. I am not sure what Klimt would have thought of this but I do know that the Secession movement would have been impressed by the continuing strength of this image as a marketing tool.

Which brings me to one of the Secession's most successful public relations innovation of all - Ver Sacrum magazine. Publication of Ver Sacrum, which is Latin for "sacred spring", commenced in 1898 and although it ceased publication in 1903, it was hugely influential, and a key medium for communicating the philosophy of the Secession movement.

Many art magazines of the period covered similar areas to Ver Sacrum with promotion of exhibitions, learned articles, essays, many illustrations and stylish advertisements. Ver Sacrum's uniqueness stems from its unusual square format and its "Gesamtkunstwerk" approach to harmonising image, typeface and ornament. 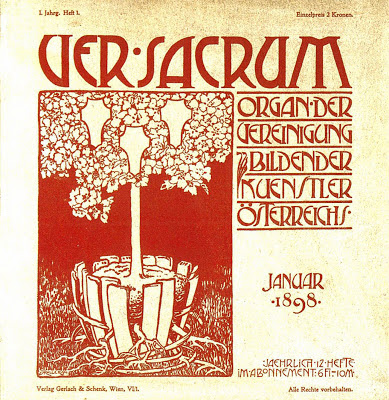 The first issue published in January 1898 (pictured right) came out prior to the first Secession exhibition, which took place in March of that year. It included a number of "proclamations" by Secession members and featured a cover design by Alfred Roller, the editor-in-chief. Roller's design featured three blank coats of arms representing architecture, painting and sculpture superimposed over a flowering tree, the roots of which are breaking free from its wooden barrel, perhaps intended to represent the Secession movement's breaking out of the conventional  Viennese art world. Moser, Hoffmann and Olbrich also contributed designs to the first edition. The direction and enthusiasm of the early contributors is illustrated by Roller's 19th April 1898 letter to Klimt where he declared "I am holding fast to the principle that every edition of V.S. is a small exhibition, but that V.S. as a whole is a large one".

Roller had the dubious distinction of having met Adolf Hitler in 1908 when the future German Chancellor was struggling to become an artist. Roller clearly impressed, as in 1934, Hitler, by this time Chancellor, invited him to Bayreuth to design a new set for a production of Parsifal at the Wagner festival. The results were said to be disappointing, closely resembling the originals of 1882. Roller died in 1935.

But back to Ver Sacrum which was warmly welcomed by the already mentioned critic Ludwig Hevesi, when he wrote that "a look at the first edition of this new art journal...the mastery with which picture and text, empty and filled surfaces are combined...this journal is assured of conquest at first site", whilst the Wiener Allgemeine Zeitung newspaper devoted its Easter supplement to the Secession movement under the heading "Spring in Vienna".

The first year was largely experimental in character but 1899 saw a more definitive style and approach. Black and white works by Moser, Hoffmann and Olbrich were preponderant, with Moser's work in particular showing Japanese influences - as did the work of many European artists in a range of disciplines at this time. Over the next few years, the magazine began to focus more on informational content and in 1900 commenced twice-monthly publication, having been a monthly for the first two years.

In September 1901, Kolomon Moser took another new direction with a series of black and white square designs he referred to as "typographical decoration to illustrate a series of poems by Arno Holz. A further development was the early use of reproduced woodcuts in 1902. Carl Moll, Max Kurzweil and Moser were particularly active in this area. Strangely, both Moll and Kurzweil committed suicide. Moll, a Nazi sympathiser killed himself in 1945 as the Red Army entered Vienna whilst Kurzweil shot himself in 1916 after having earlier shot a young women he was romantically involved with.

There were also changes to the format with the new regularity of publication. The large format, painstakingly designed earlier editions were replaced with amore streamlined, practical version, featuring geometric simplification of the decorative elements of images. The main reason for this was cost, as the Secession took over the publishing of the magazine itself and realising it could not sustain the original luxurious format indefinitely, changed the primary purpose of Ver Sacrum to one of internal communication for the movement. Fewer copies were produced, but many more illustrations were included enabling more coverage to be given to individual artists. (Below right, illustration by Koloman Moser from the second edition of Ver Sacrum). 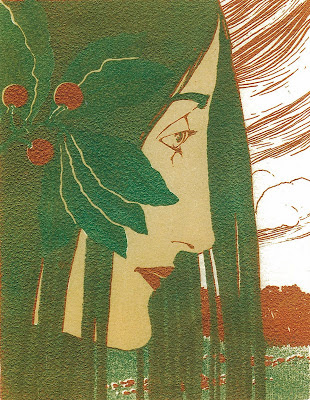 By 1903, the reduction in print runs and the exclusive nature of Ver Sacrum made it impossible for it to achieve a broad appeal and ironically its high standards which are so much admired today eventually led to its demise. A Ver Sacrum calendar was produced in 1903 featuring woodcuts from several Secession members but on 14th October, the full Secession Assembly voted to discontinue publication. The final edition took stock of the achievements of the six years of its life, which included the production of 417 drawings specifically for the magazine together with 55 original lithographs and etchings and 216 original woodcuts. With the exception of 1899, all work produced for the magazine was unpaid, and although Ver Sacrum was short lived its influence on 20th century book design was substantial.


The closure of Ver Sacrum was not the end of the Secession movement but led to another, greater and more influential development - the wonderful Wiener Werkstatte, officially registered in the Vienna trade register in May 1903. Again Moser and Hoffmann were the driving forces in what became a total lifestyle applied arts industry, taking forward and developing many of the ideas first floated in Ver Sacrum and making them accessible to the growing central European middle classes.

Much of the Secession's work can still be seen in Vienna. Key places to get the Secession experience include the Austria Gallery at the Belvedere, the Secession building itself, the  Vienna MAK (museum of applied arts) and the Vienna Museum.